Even by JVC’s usually extremely high projector standards, the JVC DLA-X55 we tested recently was an astonishing bit of kit. The latest version of JVC’s ‘e-shift’ technology, with its ability to give normal HD pictures a 4K-like pixel density, worked exceedingly well on the X55, making its £4,999 price look a serious bargain in the process.

With this in mind, we can’t help but feel a twinge of disappointment that JVC’s entry-level 2013 projector, the DLA-X35, doesn’t have e-Shift. However, this disappointment is hardly fair considering that the X35 can be had for just £2,600 – more than £2,000 less than the X55. So let’s quickly put our unfair whingeing behind us and get down to finding out how the X35 shapes up in the context of its strikingly affordable (by JVC standards) price point. 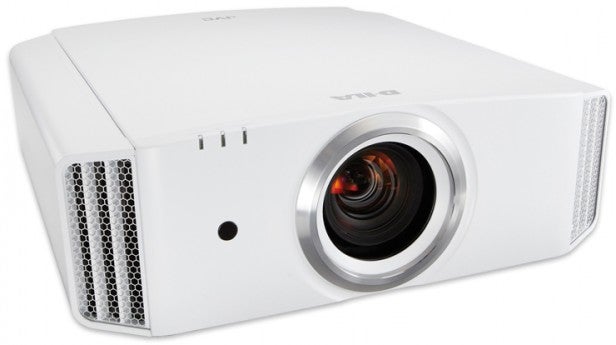 You certainly get a lot of projector for your money. The JVC X35’s black or white body is as large as those of JVC’s higher-end models this year, and it’s also reassuringly heavy, raising hopes of some seriously high-quality innards. These hopes encouraged by the strikingly big lens for such an affordable projector.

There’s no sign of any manual zoom/focus rings around this lens, and nor are there any clumsy knobs or wheels for horizontal and vertical image shifting. Not because the X35 doesn’t carry such features, though; it does. The reason they’re not visible on the projector’s chassis is because the X35 lets you access all these key setup tools via the backlit remote control, using a motorised lens array. Such set-up sophistication really is a great find at the X35’s price point, and it’s underlined by both the range of adjustment of the zoom and shift features, and the finesse with which you can make your adjustments.

Tucked away on the X35’s rear, meanwhile, is a solid set of connections. You don’t get a D-Sub PC port, but you do find two HDMIs, a component video port, a 12V trigger port (which you could use, say, for automatically firing up a motorised screen), an RS-232 control port, and a sync port to which you need to attach JVC’s 3D transmitter dongle if you want to take advantage of the X35’s 3D capabilities. 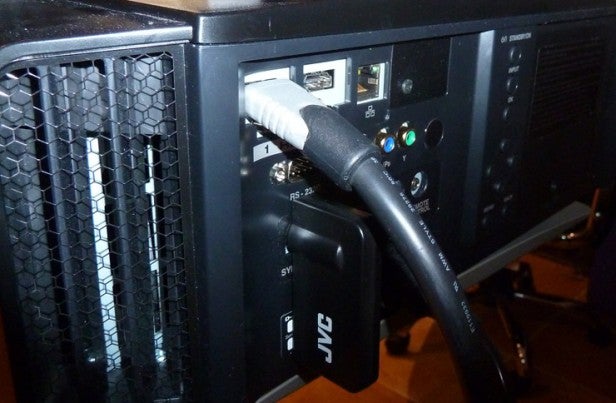 Neither this transmitter nor any 3D are included for the £2,560 price, though. A 3D kit including the transmitter and two pairs of glasses will cost £250-£300 extra depending on your retailer. Even with this cost added in, however, the X35 hardly looks expensive for the level of spec it offers.

This spec includes, most startlingly of all, a claimed contrast ratio of 50,000:1 – an already-high figure that’s made even more startling by the fact that it’s a NATIVE figure. In other words, unlike most projectors, which derive their often rather fanciful contrast ratios by using dynamic iris systems to vary the light a projector lets through its lens, the JVC X35 can deliver its 50,000:1 contrast at all times. It doesn’t have to reduce light output during dark scenes and boost them again for bright scenes in order to record its contrast ratio figure.

This fact has profound implications for the potential dynamism and stability of the X35’s handling of dark scenes – potential which experience of previous JVC D-ILA projectors suggests the X35 will deliver on.