A rugged, rechargeable speaker with Google Assistant onboard, the Link 20 has all the voice-activated smart skills of a Google Home but without the need to be tethered to a plug socket all the time.

Full waterproofing suggests it could be the perfect bathroom speaker, meaning you can leave your phone somewhere dry and control your shower karaoke sessions using nothing but your singing voice, but does it sound better than you do? And is there any point in making it portable if you need Wi-Fi to access its special skill?

Those extra talents also mean you’ll have to shell out £179 for it, making it significantly more expensive than a Google Home, Amazon Echo or a ‘dumb’ waterproof Bluetooth speaker. So is the JBL Link 20 worth the extra cash? 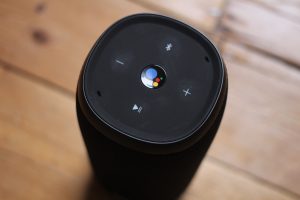 A lot of smart speakers have followed the lifestyle route, aware that they need to fit in with your decor if they’re going to become a part of your daily routine. But with its black or white flask-shaped form factor and that tight-knit fabric covering, the JBL Link 20 looks more like a regular Bluetooth speaker, although if you squint it could almost pass as a rugged Amazon Echo.

Round the back is the power button, a mute button – not for the speaker but for the microphones – and a rubber flap covering its weak spot: the micro USB charging port. While you probably wouldn’t want to put on a pair of concrete boots and kick it into a pond, it certainly feels like it could withstand being knocked on the floor by an errant toddler or drunken party guest.

Unlike most of JBL’s Bluetooth speakers, the Link 20 has no 3.5mm socket, but if that’s a problem for you, what are you doing buying a smart speaker, grandad? Also, it’s probably about time to upgrade the iPod Classic.

On top you get five buttons: play/pause, plus and minus to adjust the volume, one to activate Bluetooth, and another in the middle covered in four coloured circles. Aside from the volume buttons, you probably won’t press any of them much, because those circles indicate that Google Assistant is built in – and its raison d’être is voice control. 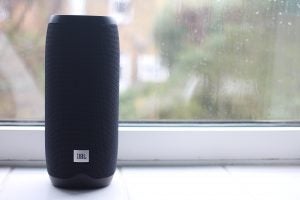 Turn the JBL Link 20 on and its Wi-Fi light (which also shows the strength of the signal) blinks at you before eventually letting out a little piano chime. Then… nothing. Compared to the friendly vocal setup guide of an Amazon Echo it’s a bit jarring, even if Google’s default voice is definitely chirpier.

If you’re new to this whole smart speaker lark you’ll have to dig out the instruction pamphlet but here’s a tip: it’s simply a case of firing up the Google Home app on your phone, which will automatically detect a compatible speaker nearby.

The app then takes you through a short, simple setup process that lets you connect the JBL Link 20 to your Wi-Fi network, your music service of choice and your Netflix account. It also now includes a training step for Google’s Voice Match tech, which allows you to match different voices to different Google accounts so that multiple users can access their individual calendars, shopping lists and even default music services.

Voice Match works surprisingly well, refusing to read out my calendar entries to anybody else, but also able to identify me even when I did my best James Earl Jones impression. It’s definitely one of the areas where Google trumps Amazon and Apple right now.

You can read our Google Home review for the full ins and outs of Google Assistant’s strengths and weaknesses but in general it offers better search results than an Echo. There’s also the ability to tag on follow-up questions to your requests without having to repeat the whole thing (although you do have to say ‘OK Google’ again). However, it currently doesn’t work with as many connected devices, which is the main thing that turns an Echo from a slightly gimmicky gadget into a genuinely useful hub of home automation. 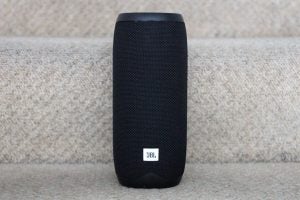 In operation, the JBL works exactly like a Google Home. Say ‘OK Google’ and a set of four white lights on the front illuminate to indicate that its listening. That’s more of a mouthful to say than Amazon’s simple “Alexa” but it does rule out accidental activation pretty much completely. You can also set it to emit a short bleep each time so you don’t have to be looking at it to know it can hear you.

You’ll get the same results from any speaker with Google Assistant onboard but how well it can hear you is specific to each one. The Link 20 has two microphones on top, far fewer than the Echo’s seven, but even while playing music on a medium setting it can still hear a command at normal speaking volume from a good five metres away. That’s important, because nothing puts you off voice control than having to repeatedly shout at it like one of those old automated cinema booking lines.

It’s not all immediate though. It takes around 15 to 20 seconds to find and connect to its stored Wi-Fi network, which, considering it has to do it every time you turn it on, is a little bit annoying. Its insistence on almost always selecting radio edits of songs is certainly worse. 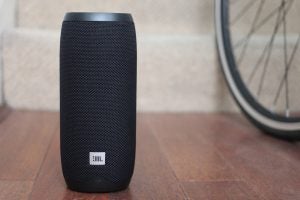 The JBL Link 20 sounds as good as any Bluetooth-only speaker of similar size and, Apple HomePod aside, is one of the better sounding smart speakers out there right now.

Bass performance has much more heft than an Echo (although it can be pretty boomy when placed on very hard surfaces) and it goes fairly loud before it starts to distort. Considering everything comes from a pair of 2-inch drivers, with no separate woofer or tweeters, it’s an impressively well-rounded, confident sound that’s enjoyable to listen to, if not the most detailed or well-defined, particularly in the mid-range.

That means the Link 20 isn’t going to challenge a proper hi-fi but positioned in a kitchen or office like most smart speakers are, it’ll definitely sound better than an Echo or a regular Google Home. Hook it up to a Chromecast and you’ve even got a rudimentary multi-room system. 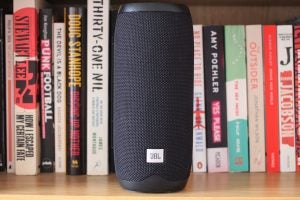 If you’re looking at buying a JBL Link 20 it’s either because you want something that’s more portable than an Amazon Echo or Google Home, or sounds better than them.

If it’s the latter, the Link 20 delivers, although not as impressively as a Sonos One, which doesn’t offer the same waterproofing or portability but only costs £20 more. If it’s the former, it’s a little more complicated.

The thing that allows voice-controlled devices to become so ingrained in your daily routine is the fact that they’re always on. That constant availability is what makes the commands become second nature. Without it, they’ll only ever be a gimmick.

That means you need to keep the Link 20 plugged in 24/7 if you want to get the most out of it, which makes its waterproofing and rugged build less useful than they might initially seem. If you’re willing to splash out £180 on a bathroom speaker, though, they don’t come much better than this. Just don’t try to plug it in while you shower. Water and electricity don’t mix, brainiac.

Think of the Link 20 as a smart speaker that will spend 99% of its time at home but can be taken away once or twice a year and treated as a standard Bluetooth speaker and it’s an enticing 2-in-1 option.

But if it’s only ever going to stay in one place, considering the Link 20 costs almost the same as a Sonos One, the latter sounds better and represents better value for money.