Out of all of Apple’s mobile ranges, the iPod nano has featured the most diverse array of incarnations. It was long and thin, then it was squat and cute, it shed the pounds again, became the size of a postage stamp for a bit and now is back to being a long, thin rectangle under its latest guise as the 7th generation, 2012 iPod nano.

The iPod nano may be suffering from a seven-year identity crisis, but that doesn’t mean it’s not a fantastic little music player in most respects.

The preceding sixth-generation iPod nano was the first to feature a touchscreen, and a touchscreen was pretty much all it was. Tiny and able to be worn as a watch, it was a bit of a strange device. The 2012 iPod nano 7th generation, however, reverts to a more traditional nano design. 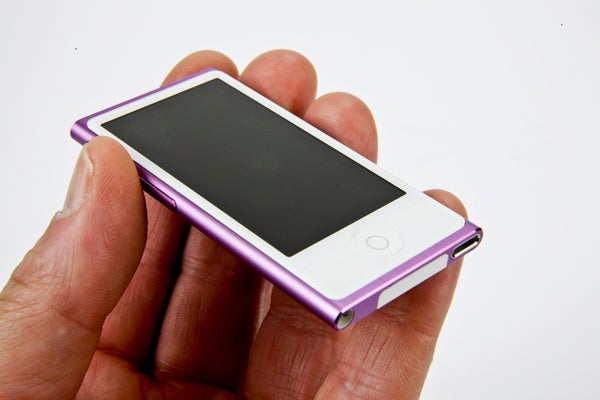 Like the new, 2012 iPod touch and iPhone 5, the shell of the iPod nano 7th generation is aluminium. It comes in eight different colours, including dark grey and silver for those who like the sober look. The sole interruption of the iPod nano’s bodywork is a small bit of white plastic on the rear. 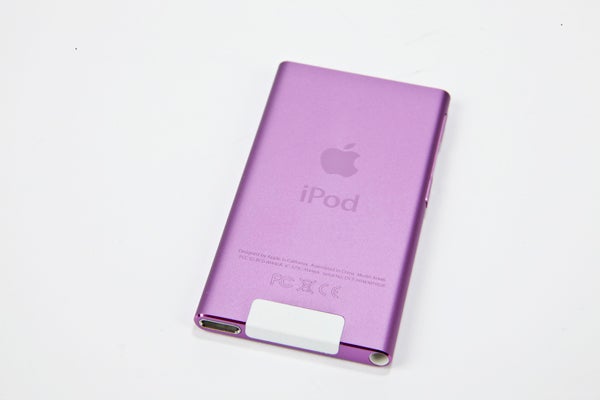 This is to ensure solid Bluetooth performance, as a full-metal body can cause serious wireless connectivity problems with things like Wi-Fi, Bluetooth and GPS. You only get Bluetooth here, though. The iPod nano 7th generation is a pretty simple device compared to the iPod touch.

Such simplicity is what lets the nano get as small as it is. It’s dinky enough to hold comfortably while out on a run, and yet has the screen and memory capacity to let it function well as a main MP3 player. However, as there’s no clip, those after a pure exercise music buddy should also consider the iPod shuffle or Sandisk Sansa Clip Zip. 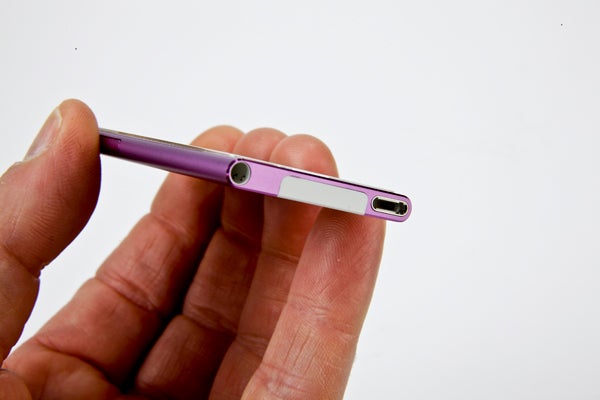 The iPod nano 7th generation inhabits a curious middle ground that may make people ask who it’s aimed at. Storage is stuck at 16GB, with no way to expand this, it doesn’t play apps or games and at £129 it’s hardly cheap. It’s a good job, then, that it’s a delight to use.

Unlike the iPhone and iPod touch, the iPod nano 7th generation doesn’t use iOS 6, or indeed any of Apple’s iOS software iterations. It features a similar visual style, but is far more stripped-back. 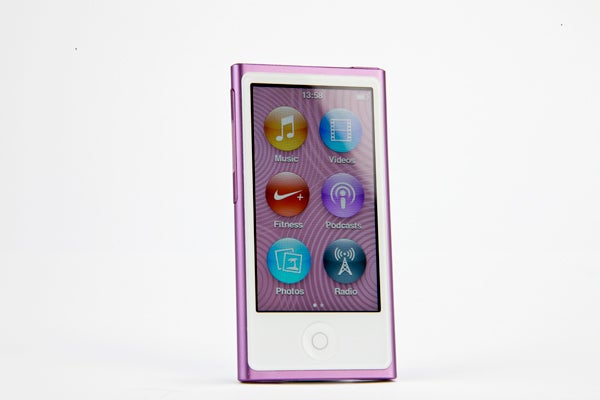 The home screen here is a selection of circular icons that represent the player’s core features, split into two pages you swipe between with flicks of the touchscreen. Running them down tells you pretty much everything the iPod nano 7th generation is capable of.

There’s Music, Videos, Podcasts, Photos, Radio, Clock, Settings and Fitness, which is the app for the iPod nano 7th generation’s Nike support. The beauty of the nano is quite how easy it is to use.

It uses a relatively low-powered NXP ARM processor, but as there’s not much to challenge its operation is superbly quick and smooth. There are neat, snappy animated transitions that tie together each part of the interface, making many cheaper MP3 players like the Sandisk Sansa Clip Zip seem a bit shonky. Let’s not forget, though, that the nano is several times the price. 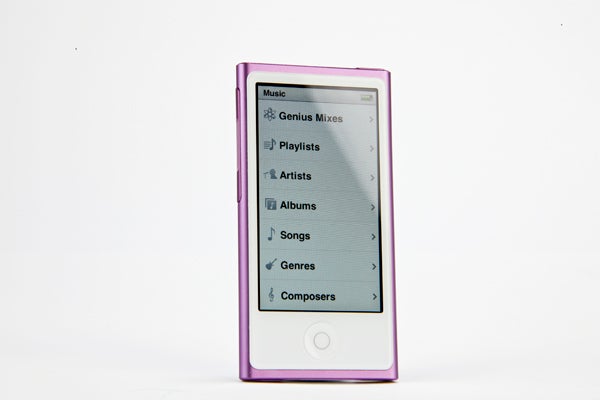 Aside from the home button, all menu navigation is handled with the 2.5-inch touchscreen, which is capacitive and highly responsive. Flick left-to-right and you’ll skip back within the menu system, and the layout of each sub-section of the iPod nano 7th generation is highly intuitive.

Music navigation is executed in standard Apple style. It’s clean, it’s quick, it’s simple and the only visual embellishments are supplied by the album artwork, used throughout.

Video files are arranged in a similar style. As with any Apple mobile product, though, you’ll have to get onboard the iTunes train to load up the new nano with music or video files. There’s no drag ‘n’ drop action here, just iTunes syncing. There’s no wireless synchronisation either, just wired transfers through Apple’s new 8-pin Lightning connector cable.

Within the little plastic coffin that the 2012 iPod nano ships in, you get a Lightning cable and a pair of Apple EarPod headphones. These replace the Apple earphones that have accompanied every Apple player for years, and they have been in development for almost half a decade. 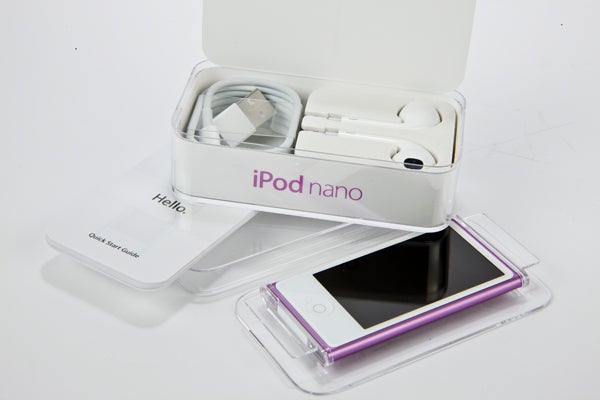 They are a significant improvement in terms of sound quality over their longstanding predecessors, but their fit is a bit of an acquired taste. The hard plastic bodies of the new Apple EarPods rest by the entrance to your ear canal, and if you fiddle with them too much they can irritate your ear cartilage. What you miss out on with an iPod nano 7th generation is a power adapter, which only ships with Apple’s smartphones and tablets such as the iPhone 4S and iPad 3.

The iPod nano’s middleweight stature also shows up in its display. It’s a 2.5-inch 240 x 432 pixel jobbie, a bit like a slimmer version of a phone screen from 2008. Pixel density is respectable, making text reasonably sharp, but it doesn’t come close to the Retina displays of the 2012 iPod touch and iPhone 5.

Display quality isn’t quite top-notch, either. The iPod nano uses a TN panel, which suffers from contrast shift when tilted the wrong way. It’s not a disaster, but coming from one of the pioneers of high pixel density screens, it’s disappointing to see a fully redesigned product end up with something second-rate. 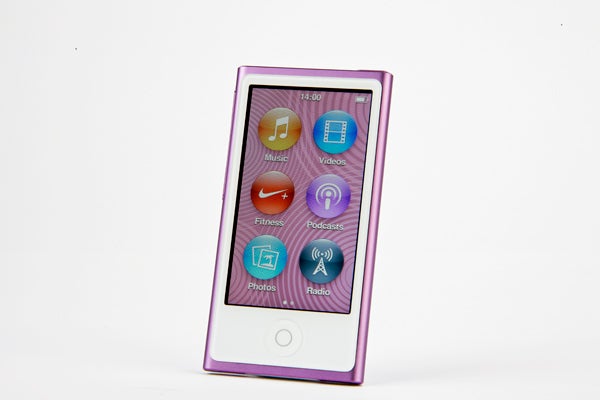 The small, relatively low-res screen makes the 7th generation iPod nano of limited use for video. It’s too dinky to watch anything longer than a few minutes on, and as there’s no way to access quick fix video resources like YouTube here.

The new iPod nano does have one feature you don’t get in Apple’s other devices, though, an FM radio. It uses the headphone cable as an antenna, and lets you pause stations by using the internal memory as a buffer. Few media players offer this function.

Nike integration is the other key non-musical addition. Used in tandem with a £15 sensor, available separately, the iPod nano can monitor runs, calculating how far you’ve run or walked, supplying you with tunes on the way. 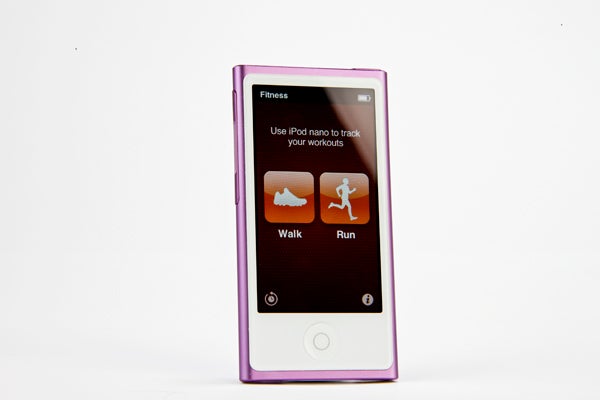 The clock function may come in handy too, but crucially there’s no alarm clock here as the iPod nano doesn’t have an internal speaker or a vibration motor. There is a countdown timer and stopwatch, though.

Other than these little extras, the iPod nano 7th generation is all about playing music – and podcasts/audiobooks, if that’s your bag.

As with Apple’s other products, sound quality in the 7th generation Apple iPod nano is respectable but not particularly note-worthy. Output is clean and has enough power to drive smaller headphones, but for mammoth high-impedance pairs you may need to use an amp.

There’s the usual basic selection of EQ modes on tap too, with 22 on offer. Apple seems to have improved the quality of these in recent times, with a non-distorting bass boost, but the fidelity of control needed to please audio fans isn’t really here. All the presets fiddle with the sound a bit too much, and you’re best off leaving it on “flat” or “off” if you use remotely decent headphones. 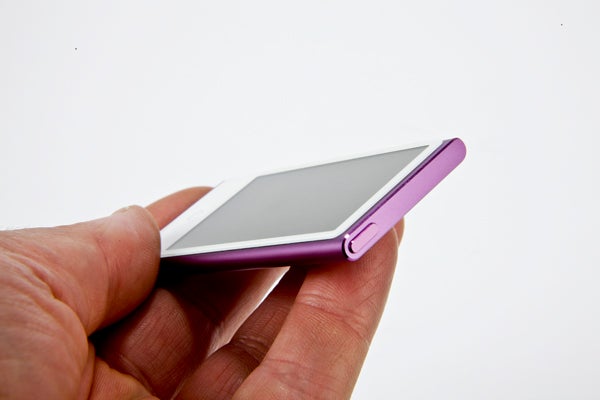 The iPod nano 7th generation offers a volume limit – handy if you’re looking to buy a nano for a child – and there’s a sound check mode that normalises volume levels across tracks.

Unlike Sony branded players such as the Sony Walkman A845, Apple doesn’t have any quirky features that automatically create mood-based playlists on the fly, but it does support Apple’s Genius Mixes, created by iTunes.

Given the relative paucity of features and the many much lower-cost alternatives that are available, the iPod nano 7th generation does not seem particularly great value. However, to an extent it’s a symptom of the stagnancy of the media player market. 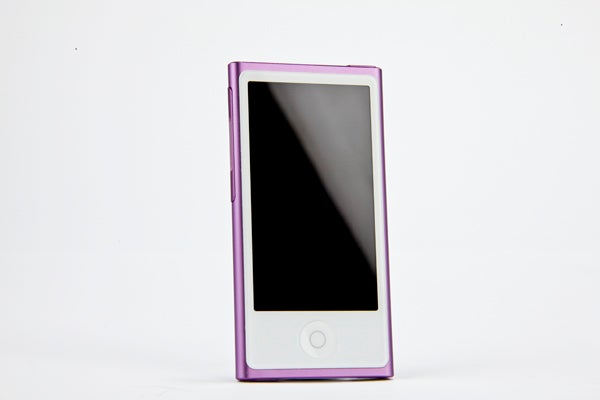 Cowon keeps on trundling out models that feel as though they should have been released four years ago. Sony’s players are at times barely indistinguishable from their predecessors. A change in design hasn’t led to anything particularly note-worthy in the 7th generation iPod nano, but that doesn’t change the truth that this is one of the nicest small players to use. The weakness of the word “nice” is telling, but then maybe not all of Apple’s products need to be “magical”.

The 2012 iPod nano 7th generation doesn’t have the chops to make the same impact as a new iPod touch or iPhone 5. Its screen isn’t great in some respects, it’s a bit expensive and it doesn’t do all that much. However, it’s so much of a joy to use on a day-to-day basis that we can learn to accept most of its limitations. Strong design and Apple’s excellent UI are enough to mitigate this partly underwhelming redesign.