iPhone 4 – iOS 4 Interface
In case you were wondering where all the talk of this phones software features has gone, we already covered all the new features of the latest Apple mobile OS, iOS4, so we refer you to that for the full low down. The big headlines, though, are support for multi-tasking, the introduction of iBooks, the ability to group apps into folders, and a unified mailbox.

Running backwards, the unified email allows you to view all your emails from multiple accounts in a single mailbox. Meanwhile, grouping apps into folders enables you to cut down the number of pages of apps you have to keep things neat and organised. The big two, then, particularly with reference to the new hardware of the iPhone 4 are iBooks and Muilti-tasking. 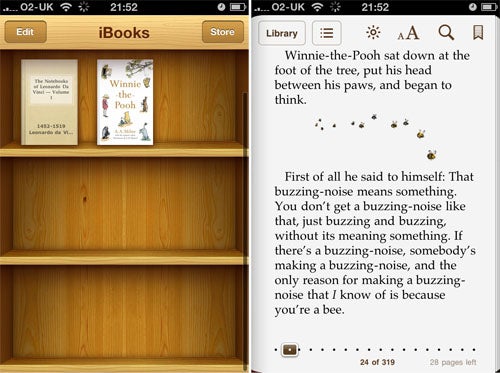 With its superb new screen, the iPhone 4 really shows the electronic books of iBooks off at their best. Certainly our caveats about the size and glossiness of the screen still stand but otherwise, reading books on the iPhone 4 is a very nice experience. Not that we feel it will replace a proper printed novel or e-ink ebook reader for reading comfort, especially when on the beach or anywhere outside, but for a twenty minute read on the daily commute it’s a very real option, and with out-of-copyright books being free, there’s plenty to get you started without spending a penny. 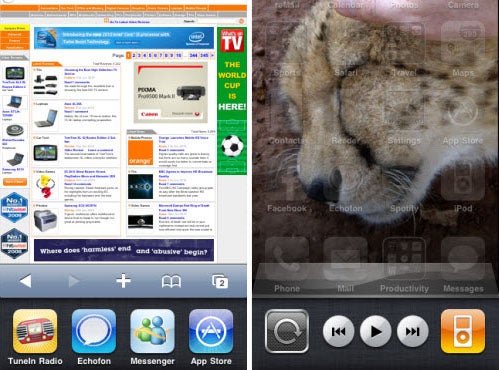 As for multi-tasking, we’ve again already covered the fact that it isn’t true multi-tasking – as you can’t have two windows open at once – but for a phone environment it’s perfectly adequate, and the speed and massive 512MB of RAM of the iPhone 4 means you can run a huge number of apps before performance is affected and you need to close a few. Having to double tap the Home button then swipe along the row of icons along the bottom isn’t perhaps the best way to manage your open apps, and we do wonder whether Apple needs to have a fairly major rethink of its UI in the near future because of this, but for the time being the overall ease of use of the operating system still puts it well ahead of most of the competition (watch out for our upcoming video review for more of an idea of the interface if you’re unfamiliar).

So, as with all these things, we eventually come down to price and here’s where much of the gloss of the iPhone 4 starts to come off. Laudable, it is, that for the first time the iPhone is available direct from Apple completely unlocked, so you can put whatever (micro) SIM you like in it and away you go. However, with the 16GB version costing £499 and the 32GB one, an almighty £599, you have really want one to justify the cost. To put these numbers into perspective, the HTC Desire (which incidentally has shot up in price since it was released) is around £380 SIM free. It doesn’t have much internal storage but you can add a 16GB microSD card for £20 or a 32GB one for £100. 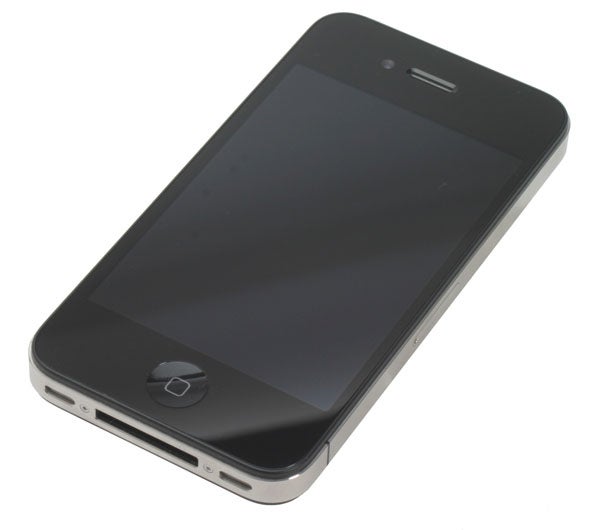 The real kicker, though, is contract prices are still pretty darned high. About the cheapest going (though all the networks are much of a muchness) is O2, but even it can only offer the 16GB model for £179 on an 18 month £30pm contract while it asks £279 for the 32GB model. Move up to £45 a month and prices start getting sensible at £59 and £149 but you’re paying £45 for 18 months! The only consolation here is that subsidies for competing handsets seem to have dropped significantly, so the gap is greatly reduced. For instance you can get an HTC Desire for £60 on an 18 month £30pm contract on T-Mobile. Still cheaper, but not such a crazy margin as SIM free.

Ultimately, though, while our reflections on price – and this review in general – may have a slightly dour tone this is largely because the iPhone 4 looked to be something truly amazing and has only proven to be a solid improvement. But, be under no illusion, the iPhone 4 is still far and away the best smartphone on the market. It’s build quality puts others to shame, it has a style all of its own, its operating system is still the easiest and slickest to use, its app store is unsurpassed, and it has some class leading features.

The ”only” real sticking point is price. So if you can take the extra £200 or so that it’ll cost to get an iPhone 4 over any other smartphone then you’ll almost certainly be happy. If, however, you’re really scraping your pennies together for an upgrade (especially if you’re already an iPhone 3GS or other top-end smartphone user) then we think you’d be better off sitting tight for a while, especially as the new version of Android has just arrived.

Looking to upgrade from the iPhone 4? Check out our iPhone 4S review and iPhone 5 preview.