iPhone 4 – Noise Cancelling Microphone and Call Quality
In addition to the normal microphone, Apple has added a second one on the top edge, finally giving the iPhone noise cancellation. This greatly improves the phone’s ability to suppress background noise and bring clarity to your voice when making calls. In our tests it proved very effective, successfully filtering out the noise of passing cars and other background din. It’s a welcome feature, but it would of course be remiss of us not to point out that this is a feature other decent phones have had for many a year and the iPhone is really just playing catchup here. 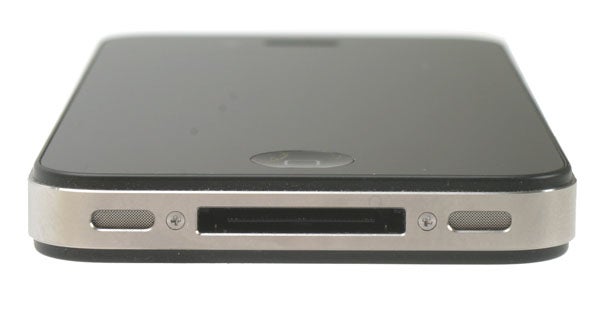 As for the phone’s speaker, it remains mono and of the same quality as previous iPhones, so watching video and listening to music is limited in scope. However it’s still impressively loud and adequate for listening to quiet music in bed, showing your mates a YouTube clip, or of course making a speaker call. Incidentally, the earpiece appears to have improved, with it being less sensitive to how you press it against your ear. One oddity is the speaker and microphone have swapped places on the new phone, with the speaker now behind the left grill and the mic on the right.

After its class-leading build quality and design, the iPhone 4’s next standout feature is its screen. Sporting 960 x 640 pixels, it has four times as many as previous iPhones and more than ”most” other smartphones out there. Apple calls this its Retina Display as its pixel density of 326px per inch is greater than the human eye can distinguish. Marketing jargon though this is, the new screen is undoubtedly sharper than any we’ve seen previously and is quite something to behold. 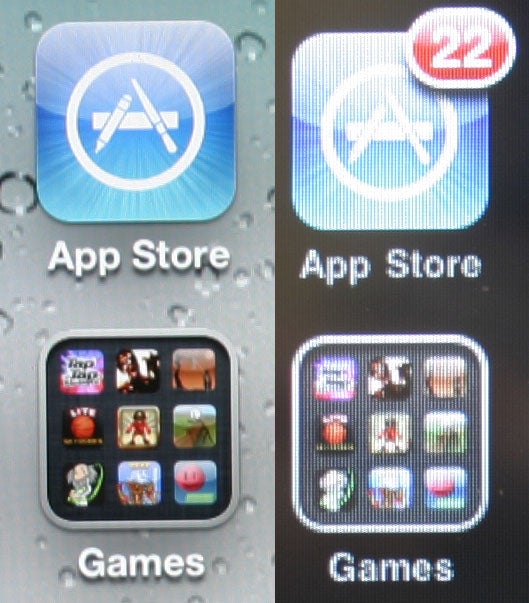 However, in practice it didn’t actually make a huge difference to how we used the phone. We’d still generally zoom in to about the same level to read a block of text simply because having it any smaller would require holding the device three inches from our faces to make out the words. Obviously it’s a great feature, but if you’ve been touting this as the reason to upgrade be prepared to be slightly underwhelmed. 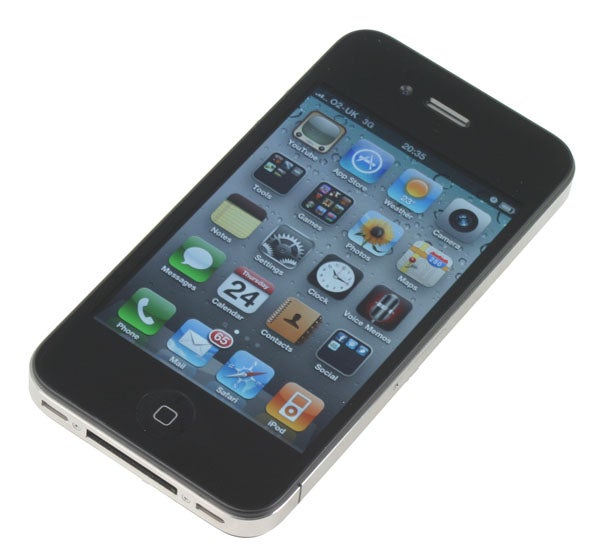 Perhaps of more import, Apple has also quadrupled the contrast ratio, giving images a greater sense of depth and punch. Viewing angles are also excellent and a notable improvement over previous gen devices. All told, this is the best LCD screen we’ve seen on a phone.

As for the fact that Apple hasn’t used OLED display technology, well it does mean the display’s viewing angles aren’t quite as flawlessly impressive and colours aren’t quite as saturated as they could be. However, colours instead look more natural than on most OLED screens we’ve seen and, because of the transflective nature of LCD panels, the iPhone’s screen is much easier to see in bright sunshine, if you can avoid reflections of course. One final note on the screen, it has a much blacker background, when off, than previous iPhones so the screen almost completely disappears from view. It’s a small thing, but it definitely adds to the phone’s feeling of quality.