iPhone 4 – Camera
Though not as revelatory as the introduction of video and auto focus seen on the 3GS, the camera on the iPhone 4 is still a notable upgrade. With a five megapixel (5MP) sensor and LED flash, its core specs are merely inline with most smartphones and still trail most dedicated camera phones. However, a camera is about more than just its megapixel count; there’s the lens quality, sensor size, image processing, ease of use, and performance.

As such Apple points out the sensor in its camera is of the new backside illuminated variety that are supposed to have inherently better lowlight performance than conventional sensors. This was certainly borne out in our tests, where we noticed less grain and colour distortion in the iPhone’s photos. It also seemed to reproduce detail and colour better overall than many standard phones we’ve tried. Be under no pretence, though, it is still well within the realms of phone-camera quality. 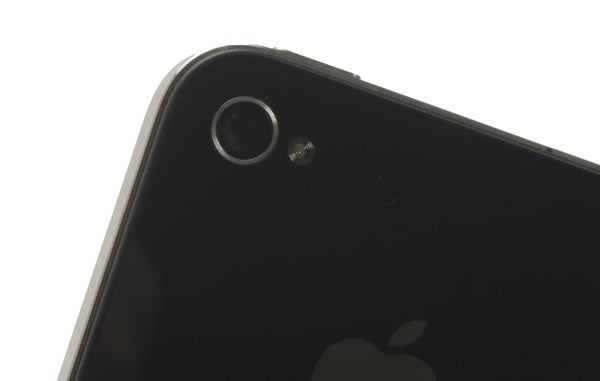 What really helps the iPhone’s photo taking abilities is the camera application, which is wonderfully easy to use with just a flash on/off/auto icon in the top left and an icon in the top right that flips between the front and back facing cameras, in addition to the existing three icons along the bottom for the picture gallery, shutter, and switching between video and stills. The app also loads pretty quickly and you can rattle off around six shots in ten seconds, which is very impressive for a phone. With the latest iOS 5 update you can also use the volume up button as the shutter button, which is useful for when you’re shooting at such an angle that it’s difficult to see the screen, such as when doing self portraits.

As for that video mode, again the app is impressively easy to use and quick to respond. However, much as with the first phone we reviewed with 720p video, the Sony Ericsson Vivaz, the resulting footage leaves a lot to be desired. It is of course good for a phone and looks okay on the phone’s screen, but watch it on a decent screen and the footage’s dull colours and inability to deal with high contrast situations (like bright sunshine) really show up. 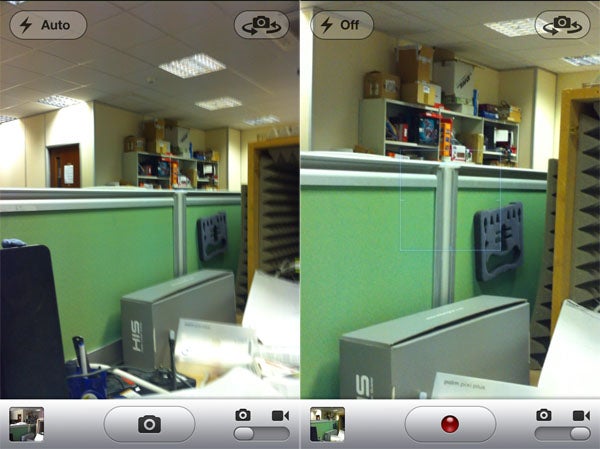 So, while quality isn’t spectacular, both videos and photos are adequate for the casual social use they will see and the iPhone 4 makes taking and using that footage as easy as possible. For a start, as with the 3GS, you can crop the beginning and end off your video before uploading to youtube, emailing to a friend, or sending via MMS. What’s more, if you download the iMovie app, which costs £2.99, you can even do some quite sophisticated video editing right on the phone. 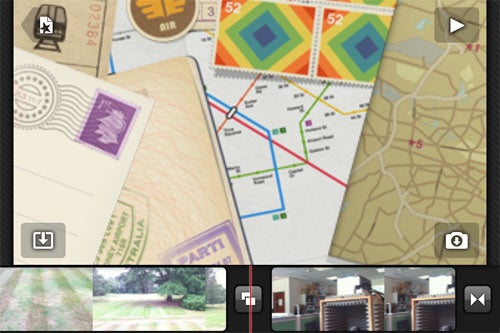 Clips can be combined into a timeline along with pictures and you can even overlay music or a voice over. There are multiple transitions to choose from, all manner of overlays and titles, and you can even apply effects, like the Ken Burns effect, to keep your footage interesting. Once complete you can export your video at 360p, 480p or 720p quality and from there you can then upload it to youtube or send it to a friend.

You can also choose from five preset themes, which determine introduction screens, overlays, and transitions and you can just drop your footage in to create a quick film. Particularly clever is the Travel theme that will reference the geotagged info in your video footage and show the location on a map in the background. It’s a seriously neat bit of software that’s so easy to use, and for the money it’s an absolute steal. 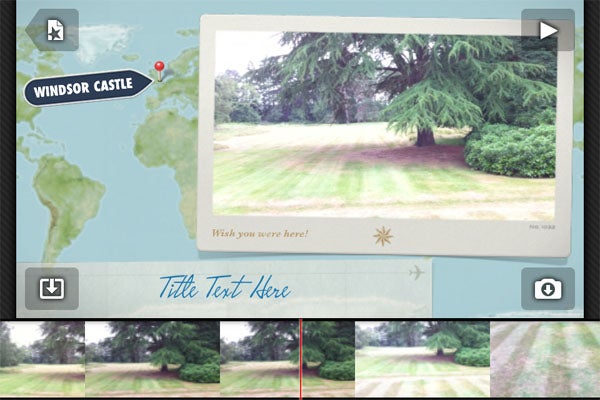 The final piece in the iPhone 4’s video related puzzle is its video calling application, Facetime. Announced with much fanfare, it allows you to seamlessly flip between video calling or voice calling and between the VGA front facing camera and the main camera on the rear so the person you’re chatting to can see your face or what you’re looking at. It’s very easy to use and quality is excellent. In fact, it’s so nice to use, we could even learn to see the benefits of video calling. However, at the moment it’s only available from iPhone 4 to iPhone 4 and only over Wi-Fi so a killer feature, it certainly isn’t. Moreover, the front facing camera can’t be used at all for conventional video calling.