iPhone 4 – Bumpers
Those that ”are” concerned about wear and tear can take advantage of Apple’s Bumpers. These are the first official Apple branded cases for its iPhone products and they wrap around the edge of the new iPhone keeping the phone protected from the majority of drop related injuries. They’re made from plastic panels set into rubber rather than the clever d3o shock absorption material used in similar looking minimalist protective solutions we’ve seen previously.

They do feel quite nice on the phone, giving it that all important curved edge, which both feels nicer and is easier to grip than the naked phone, and don’t obstruct your use of the phone much at all. Also, the raised lip of rubber that runs round the edge of the front and back ‘screens’ further keeps them safe from scratching when put on a flat surface. What’s more it’s a rather nice touch that the Bumper incorporates metal buttons, just like the phone. 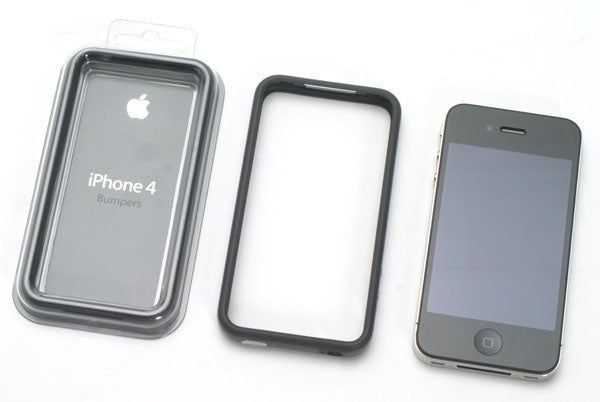 However, they do break up the minimalist look of the phone and you once again have the first-gen iPhone problem of the headphone socket being too narrow for most headphones. Also, the cynic in us may conclude that the very fact Apple has only now chosen to produce a protective case for its iPhone products suggests the new model is vulnerable, and there certainly may be ”some” merit in that. However, we think it just as likely that Apple has taken advantage of the phone’s new flat sides to provide a simple and elegant protective solution.

Looking more closely at those stainless steel sides, as Jobs rightly pointed out when he announced the iPhone 4, the gaps don’t look very ‘Apple’. However, there is method in the madness: the steel rim actually doubles as the phone’s aerial, or more precisely the phone’s aerials. By splitting the rim into two sections Apple has been able to use one section as the aerial for the mobile telephony signals of the phone and one for the local wireless services like Bluetooth and Wi-Fi. Frankly, we think it’s a piece of design genius – hard edges notwithstanding.

A potential advantage of having the aerials, which are normally housed internally, mounted on the outside of the phone is improved reception. This seems to be borne out in real life with generally fewer problems with dropped calls than previous handsets. However, there does appear to be one major oversight in Apple’s master plan: hold the phone in the wrong way (with your hand spanning the gaps as seen below) and the aerial completely shorts out and drops the call. Apple has admitted there is a problem and has even issued free bumpers to any customers that would like one – they stop your hand touching the metal so prevent the shorting out problem. Such has been the furore over this issue it has even been given a nickname – Antennagate. Ultimately, though, we have seldom found it a major problem, and wouldn’t suggest anyone be put off completely by it. 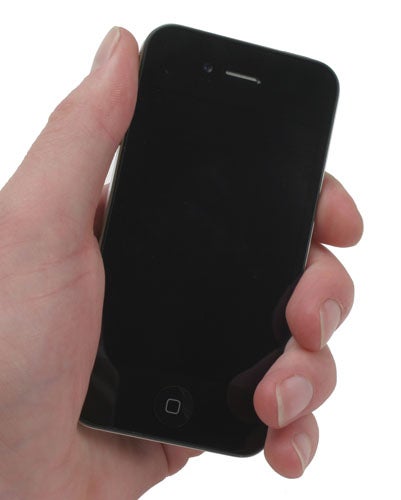 Looking round the rest of the phone, there are all the usual iPhone signatures with the aforementioned circular Home button sitting below the screen; volume controls, which are now split up into two buttons, on the left edge below the mute switch; lock button on the top edge; and dock connector on the bottom edge along with the speaker and microphone. All the buttons, like the phone in general, feel solid and have a really pronounced action so you know for sure when you’ve pressed them. The mute switch has been stiffened up and reduced in size, so it’s not so easy to knock when in a pocket, but ironically it does now make it quite difficult to use. Likewise, the volume buttons aren’t quite so easily activated, requiring quite a precise press rather than a general prod. 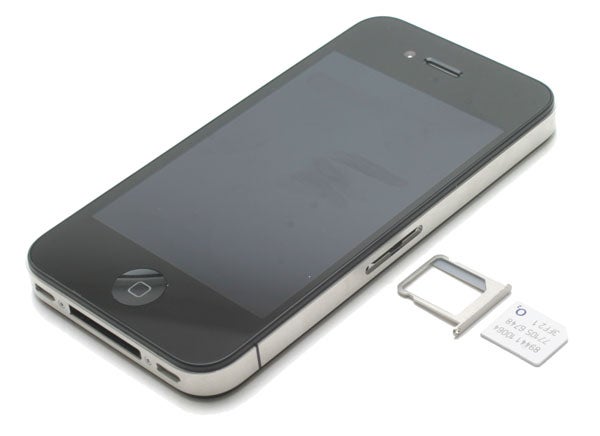 iPhone 4 – MicroSIM, Battery and Storage
Another change is the SIM slot, which used to be on the top edge. This has now moved to the right edge and it also uses a micro SIM. This is a bit annoying, but you can just cut down a normal SIM to fit and adapters are available to make your small SIM fit back in a normal slot. Apple’s perennial annoyances of having no expandable storage or removable battery also remain.