If you’re either keen to upgrade an older iPad or want to get your foot into the iOS ecosystem then the iPad 8 is a great pick, especially if you’re not overly fussed about flagship features or spending big. If you want a bit more, the iPad Air 4 is far more feature-rich, however.

Apple’s cheapest iPad is also its most popular, and with the iPad 8 it’s not hard to see why.

For the latest version of its ‘basic’ iPad (iPad 8, or iPad eighth-generation) Apple has kept pretty much everything the same, including the design and display.

This isn’t really meant to be an upgrade for those who invested in last year’s model, however the internal improvements do make it a great choice if your older iPad is on its last legs.

It’s a very well built tablet in just about every area and trumps its price-tag. The aluminium back is sturdy and the glass front, in my experience, does a good job keeping scratches away. It does lack the anti-reflective coating though, so it can be a bit reflective in sunnier conditions.

It comes in three colours (silver, gold and Space Grey) all of which are nice, if not exceptionally original. Especially when they’re compared against the lovely array of hues the latest version of the iPad Air comes in. 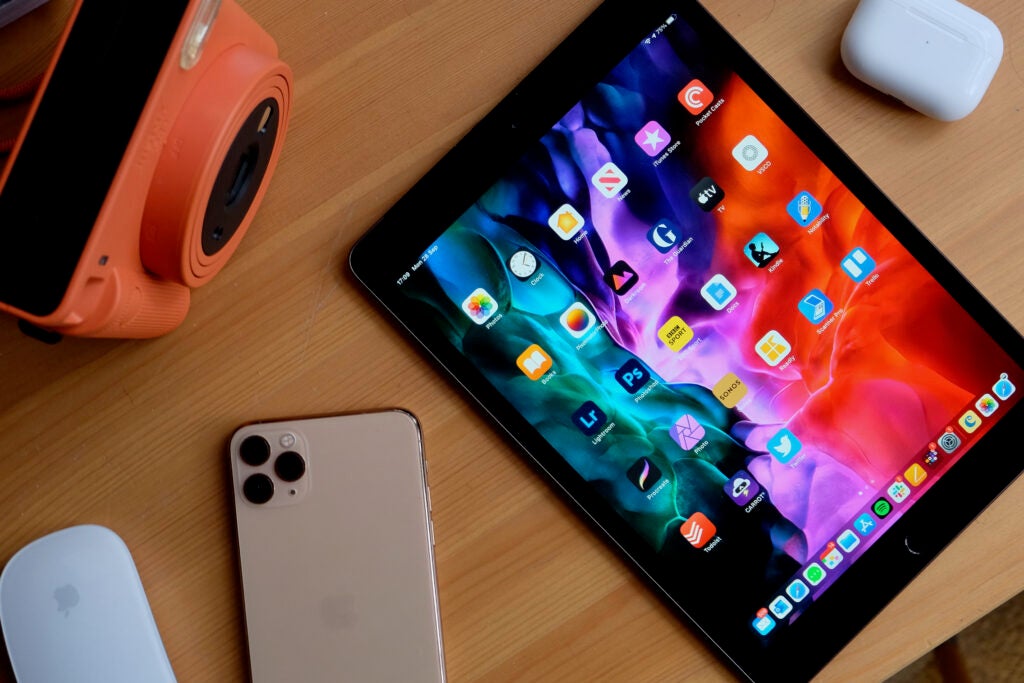 You’ve got a Lightning port on the bottom, headphone jack on top and clicky volume buttons on the side. There’s also the Smart Connector on the side, which allows you to easily connect this iPad up to the Keyboard Folio for a hit more productivity.

That keyboard remains the first-gen version, rather than the newer Magic Keyboard, and as always it is sold as a pricey add-on. Same goes for the Apple Pencil. Both are good accessories and they’re great if you want to either use the iPad as a basic laptop replacement or sketchbook, however they do push the price up.

The 10.2-inch 60Hz Retina display is great, though you could cram a much larger panel in here if the chunky bezel was reduced. The resolution of 2160 x 1620 gives a sharp image and it’s bright and responsive too. For the basic iPad, this display remains a highlight. It does miss the use of the P3 colour gamut and True Tone and the screen isn’t laminated, so there’s an ever so slight gap between the glass and display. You likely won’t notice this, but it does make it feel slightly less premium when held against its more expensive siblings.

The big, and really only, upgrade this iPad has received is a switch to the A12 Bionic chipset. That’s the same as you’ll find in the iPhone XS range (along with the XR) and a notable upgrade over the A10 Fusion that powered the iPad 7. There remains, according to Geekbench, 3GB RAM.

The new chip gives an extra hit of speed just about everywhere and it comfortably trumps similar slates in terms of benchmarks. From unlocking via TouchID, opening apps and swiping around the UI. The last iPad didn’t feel slow, but you can notice the extra oomph here. The neural engine is also improved, so AR performance is snappier.

This new chip also aids with gaming, a trick this iPad is particularly capable of. Pair up a Dualshock 4, subscribe to Apple Arcade and you’ve got a very good tablet to play games on. 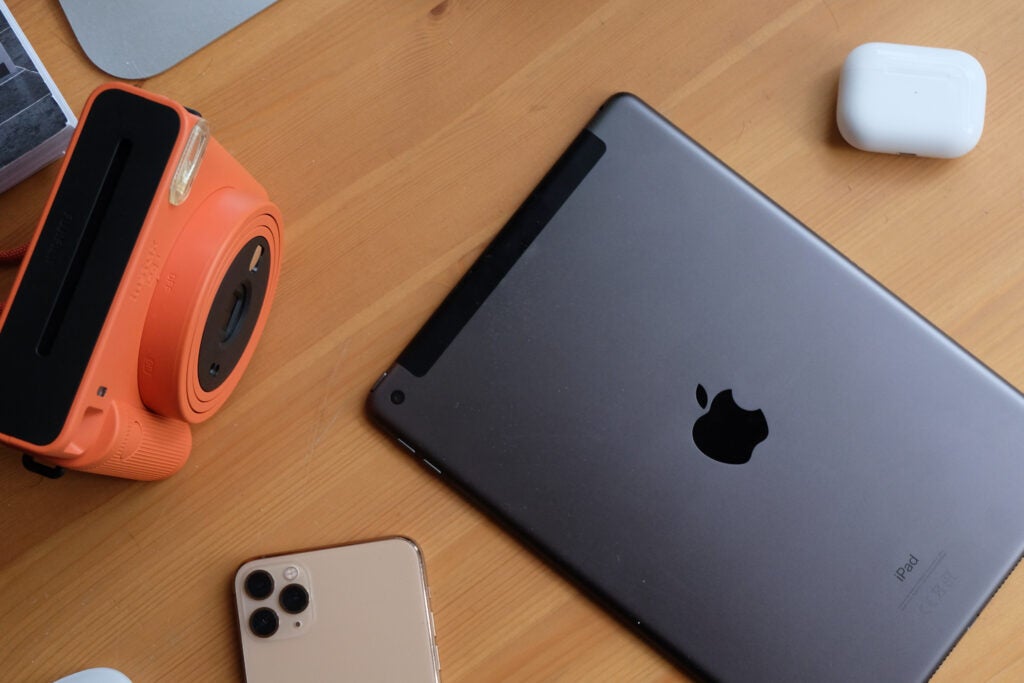 Stereo speakers pump out good audio and as the headphone jack remains, you’re not restricted in the headphones you can use here. You can also pick it up in a 4G variant, which lets you to stay connected with a SIM card when you’re away from Wi-Fi.

You’ve got two cameras: an 8MP rear and a 1.2MP Facetime camera on the front. Both are adequate for those times you need to take a photo with your tablet or hop on a quick video chat, however I would say the phone in your pocket is better for your holiday snaps.

One of my biggest disappointments with the iPad 8 is that Apple is still selling a 32GB option and it doesn’t offer a 64GB variant, so you have to go all the way up to 128GB if you want more than the basic level of storage. 32GB is near useless, unless you’re using this as nothing more than a web-browser.

You’ll find iOS 14 installed on the iPad 8 and this update brings a few neat features for the iPad.

If you’ve got the Apple Pencil, you can now use it scribble directly into text boxes and removing the need for the keyboard in the process. This is great and the text recognition has been excellent during my time with it. There’s a new search bar too which now resembles the Spotlight search on a Mac.

Apple has also redesigned the widgets, however unlike on the iPhone you can’t position them anywhere on the homescreen – they’re still restricted to a sidebar.

Apple says you’ll get around 10 hours of use from a single charge, a number that matches pretty much what I managed during my time with the iPad. Of course, battery life will vary a lot depending on how you use the tablet.

If your usage mainly restricts to web-browsing, FaceTiming and checking emails then you’ll get a fair few days without needing to reach for the charger. If you’re more into lots of video streaming and gaming then prepare to charge more frequently.

Apple keeps the Lightning port around, however there is a USB-C adapter and plug in the box. 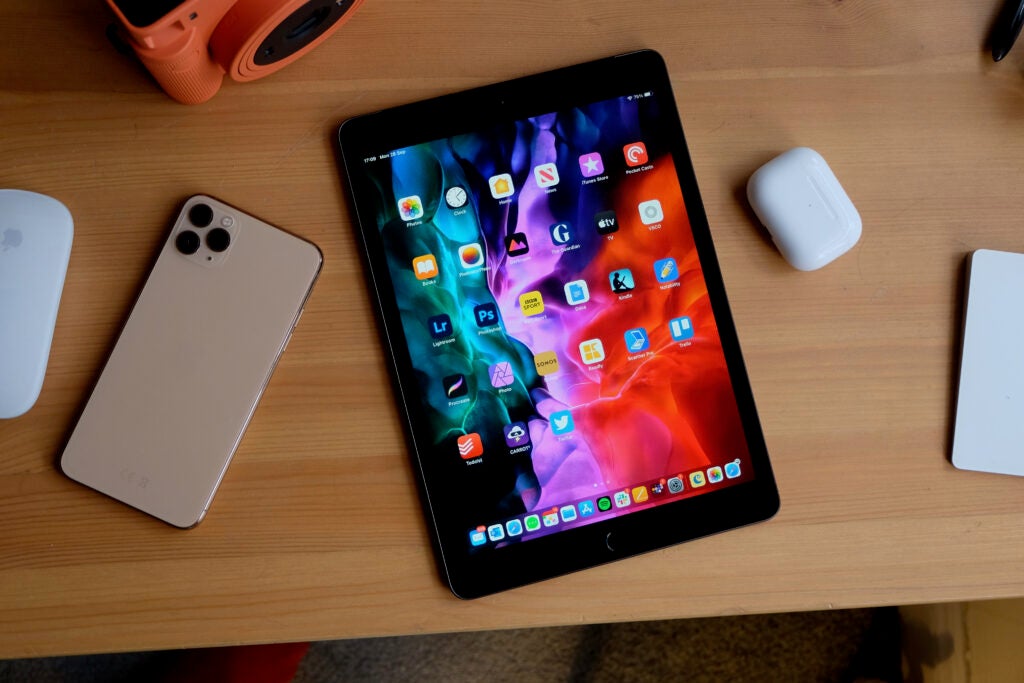 If you’re either keen to upgrade an older iPad or want to get your foot into the iOS ecosystem then the iPad 8 is a great pick, especially if you’re not overly fussed on flagship features or spending big. If you want a bit more, the iPad Air 4 is far more feature-rich.

While this is the most basic of tablet Apple sells, it’s an ideal consumption device. The screen is great, battery on par with pricier iPads and you’ll get plenty of iOS updates over the next few years.