There’s no denying this is a great, even fantastic, tablet that’s easy to recommend. If you want to upgrade an older iPad to a device that feels slicker, offers integration with the Apple Keyboard and Apple Pencil and has a larger display, then you’ll feel right at home with the iPad 7.

Apple’s cheapest tablet might be lighter on the wallet, but it remains a very capable tablet – and it now supports Apple’s Smart Keyboard along with the Pencil.

If you want an iPad without spending upwards of $400/£400 then the iPad 7 is an easy choice. It provides access to the new iPadOS, the Apple Pencil and new software tricks such as Apple TV Plus and Apple Arcade.

If you’re familiar with iPad tablets of the past five years then the iPad 7’s looks won’t be of surprise. This is a traditional iPad in every sense of the word, with a chunky(ish) bezel running around the screen, a physical TouchID sensor, and a metal back that slopes in at the sides. A Lightning port can be found along the bottom edge for charging, while a 3.5mm headphone port sits along the top; this is one of a dwindling number of iOS devices to still include the connector.

In the hands the iPad 7 feels very familiar indeed – and, rather impressively, despite sporting a design that’s been around for years, it doesn’t feel outdated. The curved sides make it comfortable to hold and the unit is weighty without feeling heavy. Slip this slim tablet inside a bag and you won’t even notice it’s there.

Of course, since this is virtually the same shell as Apple has used previously, it lacks any notable improvements. USB-C is sorely missing and that magnetic port for the second-gen Apple Pencil is also nowhere to be seen. Water-resistance is lacking, too – although it isn’t present on even the high-end iPad models.

The biggest change for the iPad 7 over the iPad 6 is the size. Apple has pushed the display from 9.7in to 10.2in, offering up a bigger canvas on which to play but also a larger footprint overall. I’ll take that size increase, though – as unless you’re holding the two models side by side, you’re unlikely to notice much difference.

The screen itself is one way that Apple has saved some money compared to the iPad Air, iPad Pro, and even the smaller iPad Mini. It’s an IPS LCD panel with a 1620 x 2160 resolution that leaves text looking crisp; however, it lacks the laminated covering you’ll find on other iPads. This results in a noticeable gap between the glass and the screen itself, and it can feel a little like you’re tapping on the glass rather than the actual pixels below it. However, it’s likely to be of notice only if you’re coming from a laminated iPad.

Overall, though, this remains a decent screen – especially for the price. It’s colourful and vibrant, offering excellent viewing angles and great responsiveness. It doesn’t feature support for HDR, but without including the OLED tech from the iPhone range, this isn’t likely to make much difference anyway. 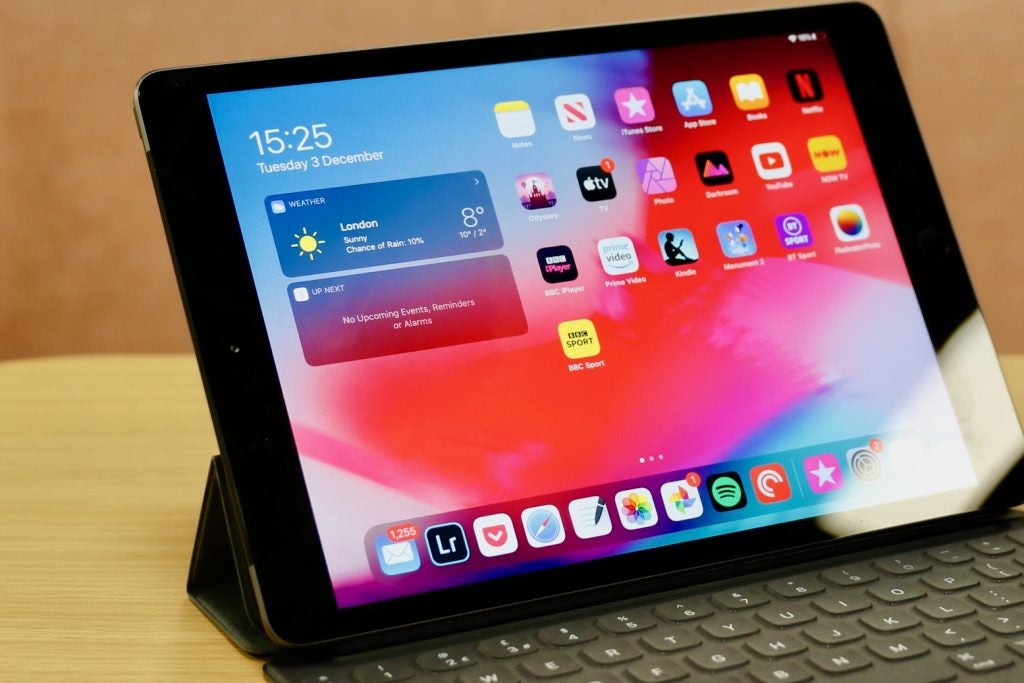 The screen is very reflective

It’s also worth noting that the screen here is far more reflective than the iPad Air, something I noticed while using the iPad 7 on a morning commute. Even the slightest hit of the sun across the screen renders it difficult to see.

Having come from the iPad Pro, I was pleasantly surprised at how fast the iPad 7 felt in general. The A10 chip might be the same type you’ll find inside the iPad 6, but it provides sufficient grunt to churn through basic tasks and even most of the games I tried from Apple Arcade with ease. Some titles, such as Oceanhorn 2, take  longer to load here than on the iPad Air, but they remain playable.

If you’re looking for a tablet to really get the most out of Apple Arcade then I’d suggest you consider the iPad Air. It just has a bit more power (A12 chipset rather than A10) and feels far faster, especially when gaming.

The iPadOS update means that having two apps running at once – with a third open, too, if it’s a popped-out video player – feels like a viable solution if you’re wanting to use the device for actual productive work.

Productivity is further improved by the iPad 7 including support for both Apple Pencil and Smart Keyboard, the latter being a first for this affordable tablet. Both accessories are a little pricey (£159/$159 for the Smart Keyboard; £89/$99 for the Pencil) and the Pencil in particular will make you ultimately wish the second-gen version was supported; but the fact that either is supported  at all is a huge positive.

Performance with the Pencil is only very slightly more laggy than on the iPad Air; it remains an excellent stylus. I’m less keen on the small keyboard keys and the fabric coating, though.

Storage options are 32GB or 128GB. I’d always recommend spending a little more and opting for the higher level of storage to avoid any regrets later. Consider that a 32GB iPad will fill up super-quickly, especially if you download lots of movies and games.

Cellular connectivity is an option, too; it ups the price by £130/$130. If you want easy 4G data without tethering then this is the way to go.

As with all iPads, there While there are cameras included on the iPad 7. However, I’d say they’re better used for scanning documents than replacing an actual camera. The 1.2-megapixel FaceTime camera is fine for video chats, and the 8-megapixel rear camera takes passable photos in good light, but the likelihood is your phone will do a better job. 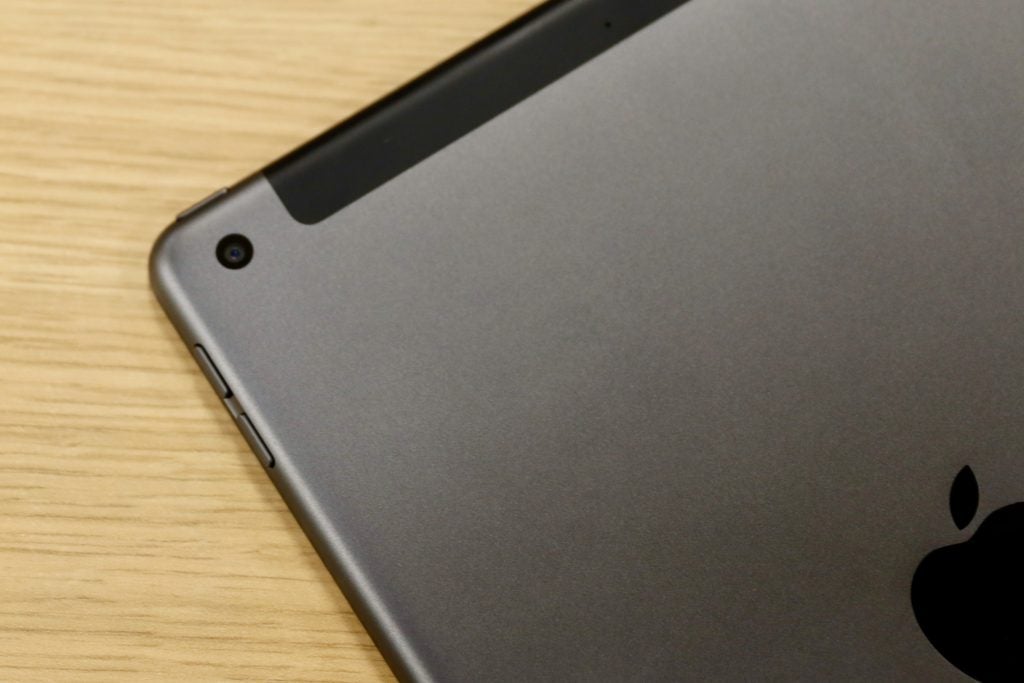 There’s a single 8-megapixel camera on the iPad 7’s rear; it doesn’t have a flash

One thing of which I’m hugely thankful when it comes to iPad devices is that the software experience remains very much the same whether you’re using the cheapest option or the £1000+ variant. This iPad 7 runs the same iPadOS (which is based upon iOS 13) as the iPad Pro, with handy features such as split-screen functionality.

iPadOS is a huge step forward for the software on iPad devices, and it makes every one of Apple’s tablets feel that bit more productive. The homescreen, for example, can now be condensed to cram in a greater number of apps and even a few widgets for at-a-glance information.

Files – once a near-useless app resigned to a folder of “Apple Junk” – is now more fully-featured, and if you have a Lightning-to-USB dongle then you can even transfer files from a computer to the iPad (and vice-versa). This would be far handier if the iPad 7 supported USB-C, but at least it’s a step in the right direction.

The Safari browser has been updated, too; it’s now called a “desktop-class browser”. This pretty much means sites will default to the layout you’d normally see on a laptop, but you can also download files.

Another benefit of iPadOS is Apple Arcade and support for PS4 and Xbox One controllers. Arcade is Apple’s big push for improved mobile gaming, providing unlimited access to lots of impressive titles such as Oceanhorn 2. Playing with a connected controller, especially one of the quality of the PS4’s DualShock 4, just makes these games feel a whole lot more fun to play for extended periods.

Then there’s also the other benefits that came with iOS 13 for phones. Apple TV Plus, a system-wide Dark mode, updated Music and Maps apps and much more.

I’ve averaged about 9-10 hours of use with the iPad 7 between charges, which is roughly the same as Apple’s claim. That’s good going, although it doesn’t feel as though it represents any improvement over older models. There’s been much advancement in battery tech here and while that figure is okay, it would be nice to eventually see it tick upwards.

Standby time remains excellent. Leave the iPad in your bag, using it only for commutes, and the device will last about a week (in my time with the device anyway); more if you’re using it only sporadically.

What’s less impressive is the amount of time it takes to charge. It will take upwards of three hours to take the iPad 7 from 0-100% – hardly remarkable in an era of fast-charing. 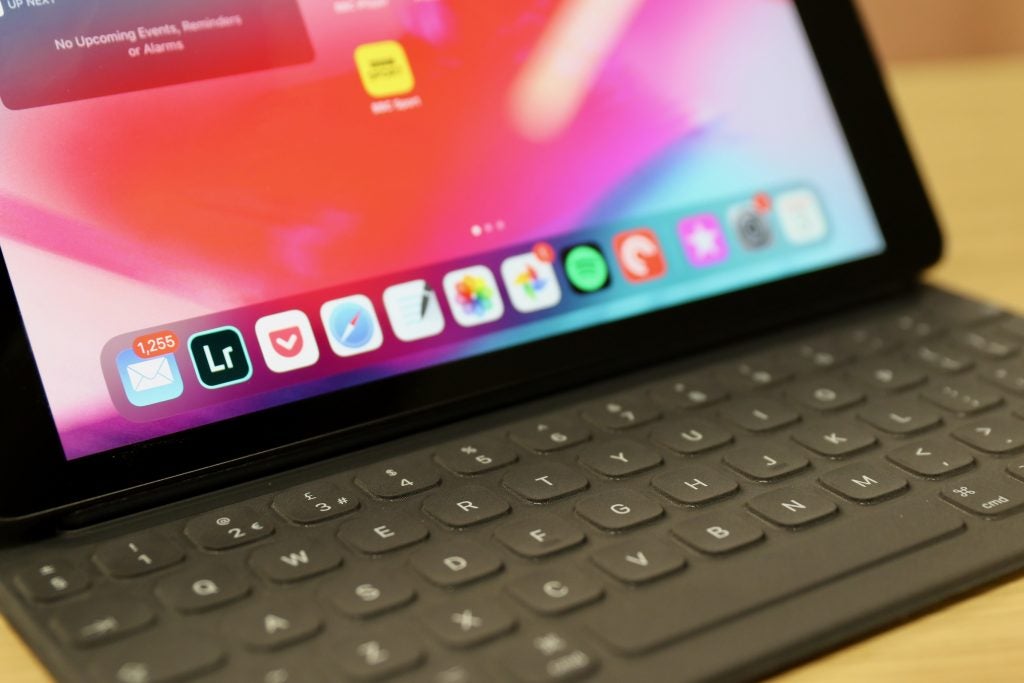 A cheap way to utilise the Apple Pencil

The Apple Pencil is a fantastic add-on and the first-gen stylus works here. Pair that with the bigger display and you’ve got a great tablet for drawing.

This is one of the cheapest iPads you can buy and it still runs the same software and apps as the pricier models.

You need to pay much more for an iPad with a truly great screen and the one here is very reflective.

For a look at newer iPads, see our best iPad guide.

When did the iPad 7th generation come out?

How big is iPad 7th generation?

What is the iPad 7th generation called?


No. Apple has yet to release a waterproof iPad.

An iPad version of iOS made for tablets.

Apple’s stylus for use with its tablets. There are two models available and each works with different iPads.

Apple’s port of choice for charging and data transfer. You’ll find it on the cheaper iPads and all of Apple’s phones.