All of Intel’s mainstream desktop processors have included integrated graphics for several years now and Skylake is no different. The exact configuration will vary from chip to chip, with some sporting the new higher power graphics with dedicated L4 caches like on some recent Broadwell chips – ideal for powerful compact computers where a graphics card isn’t an option.

However, most will sport a variation on the Intel HD Graphics 530 that is included in the 6700K and 6600K. Not that we know a great deal about these GPUs as Intel is yet to reveal many details regarding its inner workings.

However, we can work a few things out for ourselves. For instance we know it runs at 350MHz and addresses 1067MHz of RAM via a 128-bit bus producing 34.1GB/s of memory bandwidth. It’s also rated to support DirectX 11.2 – notably, not DirectX 12 – and features 48 unified shaders, 8 ROPs and 16 TMUs producing a pixel fillrate of 2.8GPixel/s and texture fillrate of 5.6GTexel/s.

This compares to fillrates of 0.8GPixel/s and 1.6GTexel/s for the Intel HD Graphics 4600 as used in the Core i7-4770K/4790K and Core i5-4670K/4690K. That older design also has just over 20GB/s memory bandwidth. This clearly marks the HD Graphics 530 out as a significant upgrade, though as ever it’s still a far cry from the performance you’d get with a dedicated graphics card.

As well as a processor design, Skylake ushers in a new chipset and CPU socket too. So, yes, you will need to upgrade your motherboard to get one of these CPUs… well, to get one working at any rate.

The only chipset to support Skylake that has been announced so far is Z170. As well as supporting the new LGA1551 socket into which the processors will sit, it brings several other upgrades with it over Haswell/Broadwell’s Z97.

Primary among these is the addition of four PCIe 3.0 lanes, making for a total of 20. This greatly opens up the potential throughput of the system for things likes PCIe storage, such as the new Intel SSD 750 series, and Thunderbolt without impacting on the performance of graphics cards. 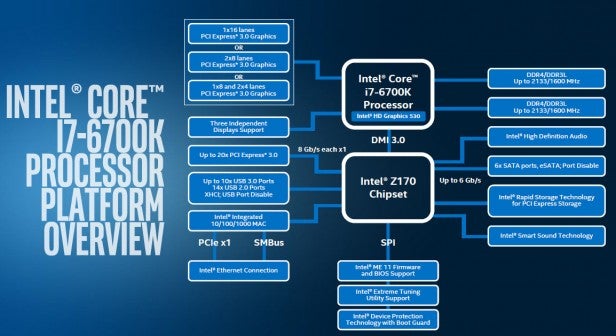 Thunderbolt 3.0 also debuts with Z170. This is essentially an extension to USB 3.1 Type-C, with it using the same socket. However, it will use a different (though USB-compatible) cable that allows it to increase throughput from 10Gbps to 40Gbps as well as add new features like the ability to use it to attach graphics cards.

Also new with this chipset, when combined with the 6700K and 6600K, are more granular overclocking options. Instead of the ratio based Base-Clock setting of previous setups, the Base Clock can now be set at any level with increments of as little as 1MHz. Memory frequency can also be massively boosted up to 4133MT/s while DDR granularity steps reduce from 200/266MHz to 100/133MHz.

When it comes to the physical design of the new Skylake chips – or at least the 6700K and 6600K – there’s not a huge amount to say about them as they look and perform largely like most recent previous Intel CPUs.

The most obvious feature of them as compared with AMD’s processors, or indeed much older Intel chips, is that they don’t incorporate any contact pins but instead have flat gold contacts. Instead the cost of manufacturing all the tiny pins required is passed onto the motherboard manufacturers, as these are all in the mounting socket. 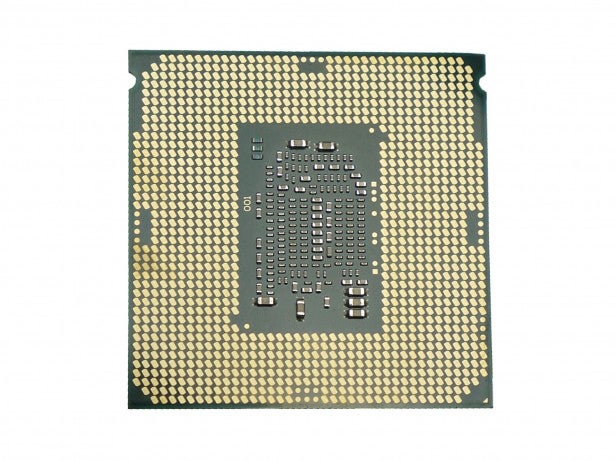 A greater number of tiny resistors and capacitors on the underside of the package indicates extra effort to deliver the smoothest possible power to the chip, for better overclocking. This was a noticeable upgrade when comparing the high-end Haswell-refresh chips – the i7-4790K and i5-4690K – to the lower level parts so we expect more mainstream Skylake processors to have fewer components on the underside.

On the topside, the metal heat spreader is glued in place over the silicon chip itself, with a thermal interface material (TIM) used to marry the two together, carrying heat away from the chip. This paste is likely the same improved formula that was used in the Haswell-refresh chips, after Intel received multiple complaints about the formula used on the original Haswell chips – so poor was the material and the way it was applied that users took to removing the heat spreader and applying their own paste.