The Huawei Y 100 is an example of what Huawei does best. It’s a highly affordable Android phone designed to get give late smartphone adopters a chance to get on the ladder that leads to the iPhone 5s and Samsung Galaxy S3s of this world. It sells for £79.99, and is quite cute and very small. But in spite of its accessibility, it makes compromises that undo some of its best efforts.

Design
Huawei isn’t a company that’s thought of as having a massive ego. Most of its devices have had other companies’ names slapped on them, and while it’s going out on its own with phones like the Huawei Y 100, some of that humble flavour remains in the design. 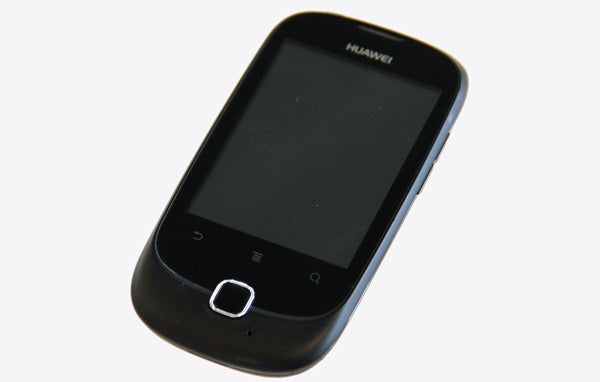 Made of soft touch matt black plastic with some unobtrusive silver trim bits, the Y 100 is a mostly-tasteful, unassuming phone. Using a petite 2.8in screen lets it stay small, a light year away from the envelope-pushing budget handsets like the 4.3in Orange Monte Carlo, produced by Huawei arch-rival ZTE. It’s light, it’s kinda cute, and while it’s not going to convince anyone it costs much more than £100, we appreciate its sensible looks.

As is common among 4:3 aspect 2.8in screens, though, there’s a large area of empty black bezel – a reminder of quite how small the screen is here. The Huawei Y 100 uses the standard trio of Android nav buttons, which are touch sensitive and sit just below the screen. 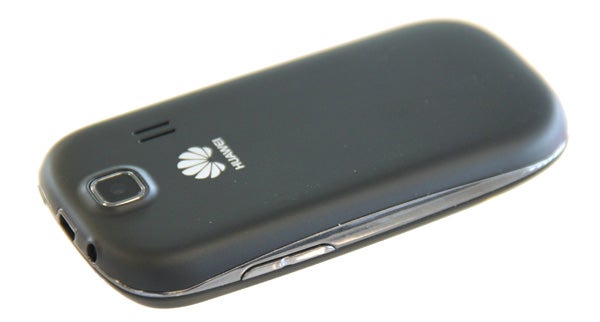 Further below sit the square home button and the pinhole microphone. Its design has a less recognisable look than the larger – but similarly-priced – Huawei Blaze, but uses a glass front rather than hard plastic. Although more prone to cracking when dropped, it’s less prone to scratches with normal use.

Not super-slim, not fat either

Connectivity
Like every Android phone, the Huawei Y 100 offers high-speed HSPA mobile internet, letting you browse the net while you’re out and about. Don’t have mobile internet as part of your package? Wi-Fi n is on-hand too.

On the hardware front, the Huawei Y 100 packs a limited number of connections, but it’s an array perfectly suited to a budget phone like this. Up top we have a microUSB slot, to charge the phone and give access to its internal memory, and a 3.5mm headphone jack. Under the battery cover, which makes up the entire back, there’s also a microSD slot. Without plugging one in – and there isn’t one supplied – the phone is very limited as there’s just 160MB of internal memory.

Specs
A glance down the Huawei Y 100’s spec list reads like an archetype budget phone. The 2.8in screen is small, the 3.2-megapixel camera low-rent and simple plastic body the norm. Just one part sticks out. It uses an 800MHz Qualcomm processor, where other bottom-end Androids often have 600MHz chips. Does it make a difference? We’ll find out later.

Android OS
The Huawei Y 100 uses Google’s Android 2.3 Gingerbread software, with a few Huawei tweaks applied to give the phone its own character. Gingerbread is not the latest version of the Google OS, lacking the interface tweaks and a handful of periphery features you’ll find in version 4.0, Ice Cream Sandwich.

Huawei tries to make up for some of these with its custom UI, but the basics of Android remain untouched. You have five home screens as standard, an icon-based shortcut dock that holds up to four apps or phone features, and the full apps menu. 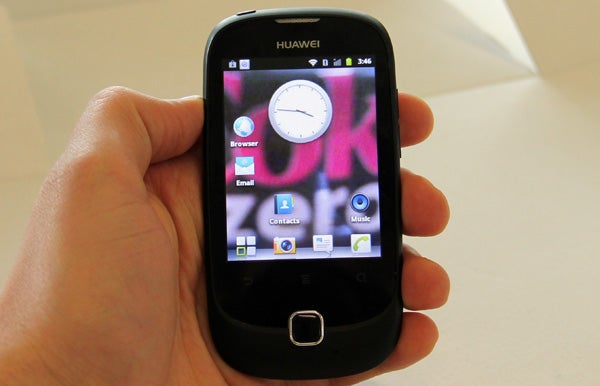 The custom UI fiddles with how these look and feel a bit. For example, when you flick between home screens, their contents fold away in 3D as if on the side of a rotating cube. The apps menu is similarly over-animated, pages over-shooting as they’re turned before clunking back into place. These animations don’t seem to slow the phone down, but can look a little juvenile, especially on a small screen.

Much more substantial is the way the Huawei Y 100 alters the Android lock screen. You drag a lock symbol to unlock, with four zones taking you to a quartet of phone functions – text messaging, phone calls, the camera and the standard home screen. The last is deliberately made to use the gesture most natural to right-handed people – the right thumb swipe. 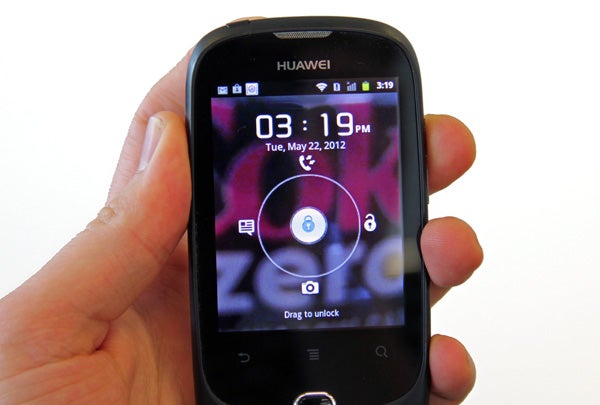 Huawei says the interface is all about ease of use and accessibility, but the over-simplification has some annoying side-effects. It makes changing wallpapers more difficult, for one. Where you can normally hold the finger down on the home screen to bring up the wallpaper option, here you have to delve into the gallery, select a picture, bring up its sub menu, select another menu then hit “Set as Wallpaper”. As something almost every buyer’s sure to do, this seems a bit of a mistake.

Screen
The small screen of the Huawei Y 100 doesn’t do the phone any usability favours, either. The capacitive touchscreen is highly responsive, but the screen area is simply a bit too small to make typing accurate and fast. You’ll get better with practice, but it’s not as comfortable to use as the 3.2in screen of the Huawei Blaze or the 3.5in screen of the Orange San Francisco 2 – phones that don’t cost much more. 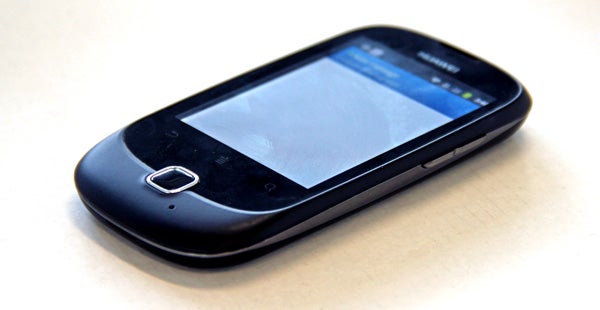 The Huawei Y 100 has a 2.8in 240 x 320 pixel display. This is the same resolution and size and some of the earliest budget Android phones, such as 2009’s HTC Tattoo. If the phone has a single weak link, this is it.

Single pixels are visible in normal operation, making text look a bit blocky, and overall display quality is below average. Colour look washed out, there’s copious contrast shift if you tilt the phone towards you – next to several other sub-£100 Android phones, it is thoroughly shown up. The one positive thing to say about it is that maximum brightness is pretty good, which will come in handy on sunny days.

Keyboard
To try and combat the fiddly feel of a 2.8in screen, the Y 100 employs the Touchpal keyboard rather than the standard Android one. It’s fairly successful too, especially if you choose the “Larger Keyboard” option, which makes the keyboard take up an almost-comical 70 per cent of the screen. 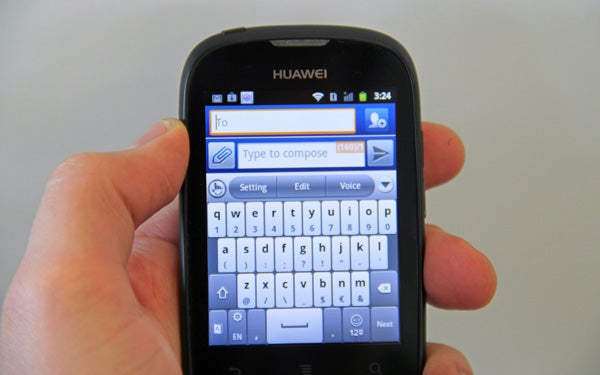 If it’s still too small, a T9 keypad and two-letters-per-key keyboard are also available. After a few days of typing away, we started getting used to using the smaller screen, but the sense you’re being compromised by the 2.8in display never quite goes away.

Apps and Games
As an O2 exclusive in the UK, the Huawei Y 100 comes with a few O2-flavoured shortcuts on its app page. Oddly enough, O2 Priority Moments, O2 Space and O2 Priority Moments aren’t pre-installed apps, but links to Google Play where you can download the apps. Thoughtfully, this means they won’t take up the scarce internal memory if you don’t want them. 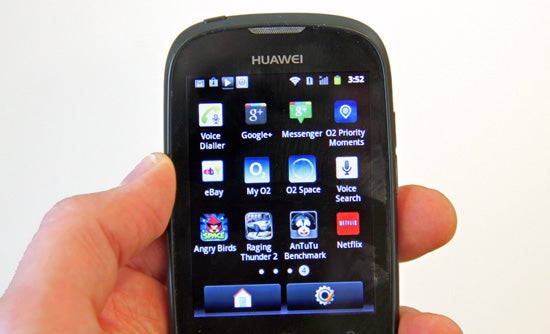 Huawei extras are also mercifully minimal. All Backup lets you backup all your settings, call logs SMS messages, contacts and more to a microSD card, and Streams is an inoffensive social networking app that sews together updates from Twitter and Facebook into a single stream. 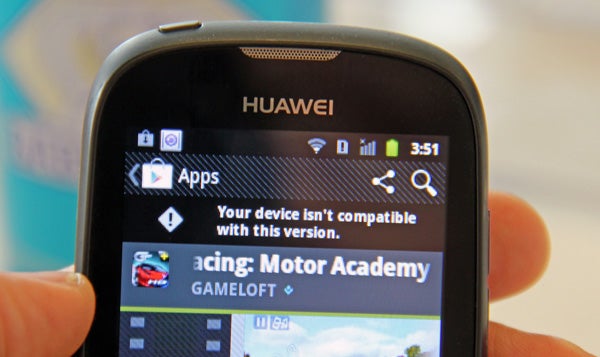 Video
When dealing with a 2.8in screen like the Huawei Y 100’s, you don’t expect much in terms of video playback. We were pleasantly surprised to find that it can handle a fairly wide array of file types including DivX and Xvid. SD content plays back reasonably smoothly.

However, it refused to play all our MKV clips and HD-resolution files. It’s no great shame, though, as the video viewing experience here is pretty dismal. The screen is simply too small, and the limitations of the low-res, low-grade display all too evident. Thumbnails for videos also refused to appear in the “Gallery” media player too, making video selection an annoying case of trial and error. 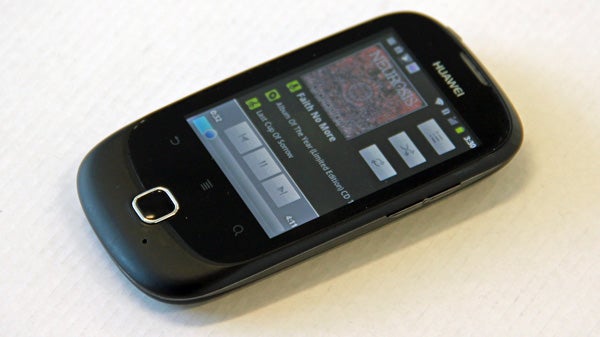 Sound quality and volume output are – predictably – nothing special, but paired-up with a large microSD memory card the Y 100 can double-up as an MP3 player easily enough. Beyond the MP3 basics, it doesn’t support lossless FLAC files, but there is an FM radio app, using the headphone cable as the aerial.

Camera
There is just a single camera on this phone, so you get no video chat here. It has 3.2 megapixels to work with, no flash and no autofocus. Phone cameras do get worse than this, but not without trying pretty hard. 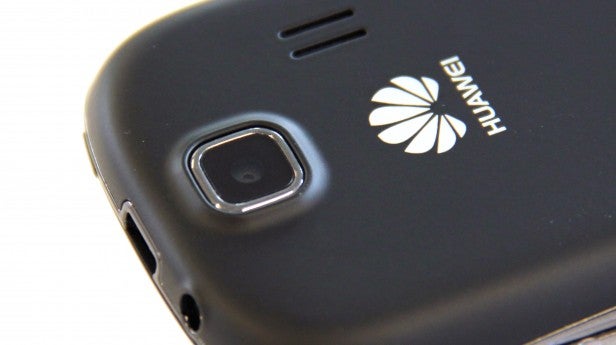 There’s no customisation of the most basic version of the Android camera app pre-installed. You have a few scene modes to pick from, or a fistful of basic effects like mono and sepia, but that’s about it.

Not having a flash or autofocus to play with makes it useless for anything but the most casual throwaway shots. The results aren’t great, either. On a bright – if not entirely sunny – afternoon, the Huawei Y 100 made the London skyline look glum and dusk-like, and detail captured is not a patch on a decent autofocus-enabled 5MP camera. Keep your expectations low and you won’t be (too) disappointed. 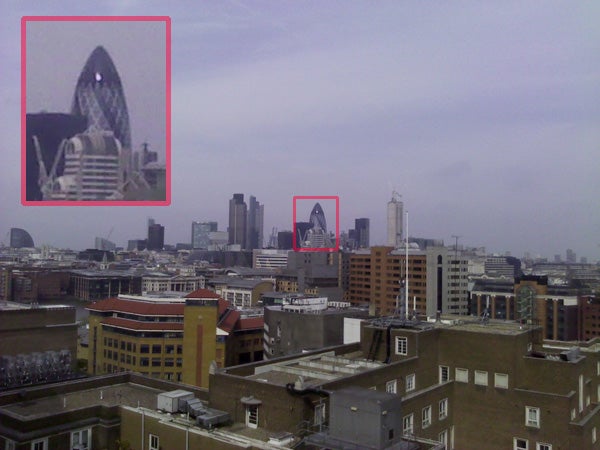 Shot on a fairly bright afternoon, but you wouldn’t know it 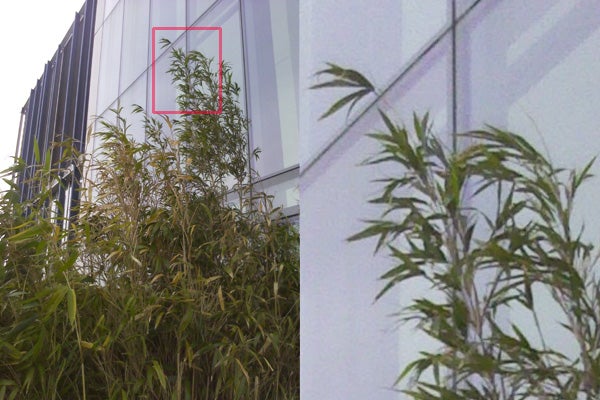 Call quality and battery life
Both call quality and battery life of the Huawei Y 100 are fairly unremarkable. The loudspeaker on the back is fairly clear and forthright, but the phone lacks the active noise cancellation of more expensive phones. Its battery is a 1050mAh model, which will get you a day and change’s use with 3G enabled, or up to three days with light Wi-Fi-only usage. 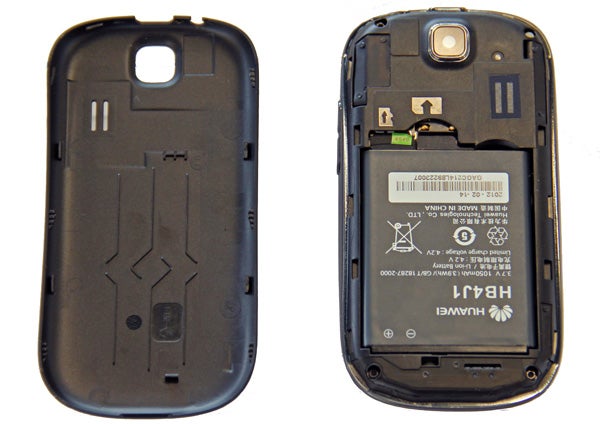 Value
The Huawei Y 100 gets several of the basics right. Its 800MHz processor offers decent performance and the custom UI doesn’t ruin Android. However, it gets several core elements a bit wrong, too. The screen is small and low-res, which not only stymies overall enjoyment but makes the phone incompatible with many of the games and apps its target audience of younger and less experienced smartphone-wielders would enjoy.

A year ago, the low price and decent touchscreen quality would have been enough to justify the Y 100 entirely. However, now that great phones like the Orange San Francisco, Huawei Blaze and Orange Monte Carlo have raised the bar, at £80 the Huawei Y 100 doesn’t quite fit comfortably. Once it drops below £50, it’ll make a much more sensible buy.

The Huawei Y 100 is one of the cheapest Android phones around. And thanks to its 800MHz processor, it performs well among its rivals. However, the small, low-res screen has just too many drawbacks to make it seem like a bargain at £80. Typing feels cramped, text looks blocky and games support is severely reduced. There are a few too many capable alternatives around the same price.