The Huawei Watch GT is a competent running watch, but its smart functionality needs work.

What is the Huawei Watch GT?

The Huawei Watch GT is the latest wearable from the Chinese giant. However, unlike it’s past smartwatches – which focused on dethroning the Apple Watch – the GT has an overt fitness focus.

This, plus its £200 price tag, puts it in direct competition with dedicated fitness trackers from the likes of Garmin – which makes most of Trusted Reviews recommended sports watches, such as the equivalently priced Vivosport and Vivosmart HR+.

However, teething problems with its custom-made Lite OS software limit it’s appeal as a smartwatch. The OS doesn’t allow you to fulfil basic tasks, such as pairing with your fitness app of choice, or controlling your music with the Huawei Watch GT. 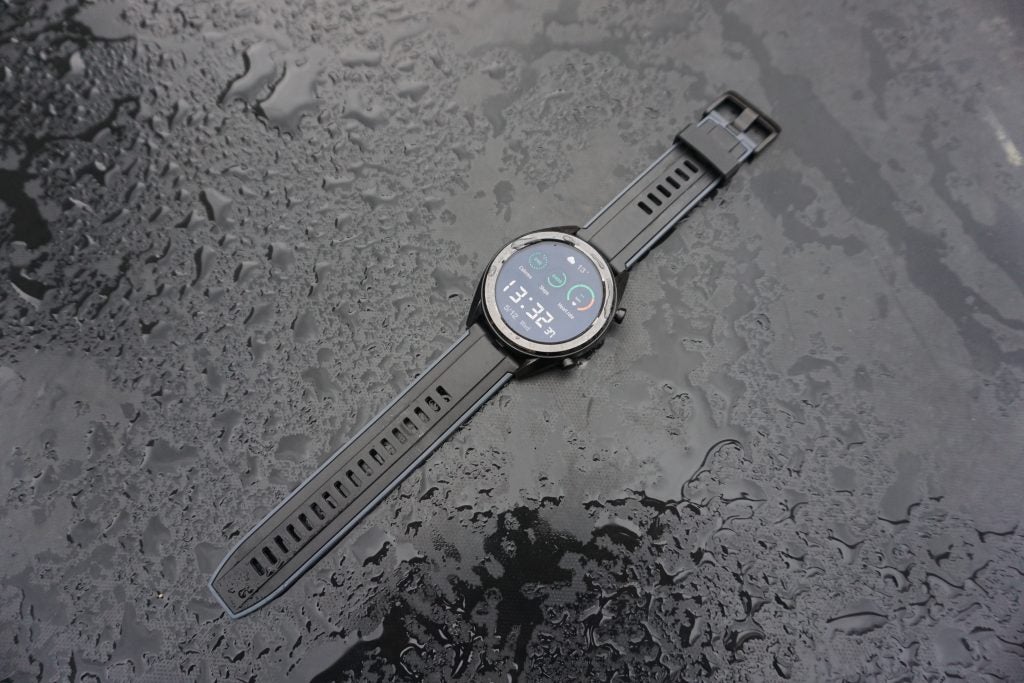 As fitness trackers go, the Huawei Watch GT is a design marvel. This is mainly because, unlike many competing trackers at this price, it looks like a watch. Its circular 46.5 x 46.5 x 10.6mm stainless-steel body is available in black or metal finishes.

You can customise the device further, with Huawei offering a selection of silicone strap for the Sport version I tested. These include Graphite Black (tested), a Saddle Brown leather option, Glacier Grey and Fluorescent Green colour options.

Around the side sit two physical buttons plus that, paired with the 1.39-inch AMOLED touchscreen, act as the primary means to interact with the watch. Fit is outstanding: over the past three weeks of testing, I’ve found the Huawei Watch to be one of a select few wearables I’d happily wear 24/7.

The Watch GT also ticks most of the right boxes when it comes to hardware. The AMOLED screen is vibrant and has a sharp 454 x 454 (326ppi) display that ensures text and icons are uniformly readable. Maximum brightness levels are great, too, ensuring the screen remains legible even when you’re using it mid-run in bright sunlight. 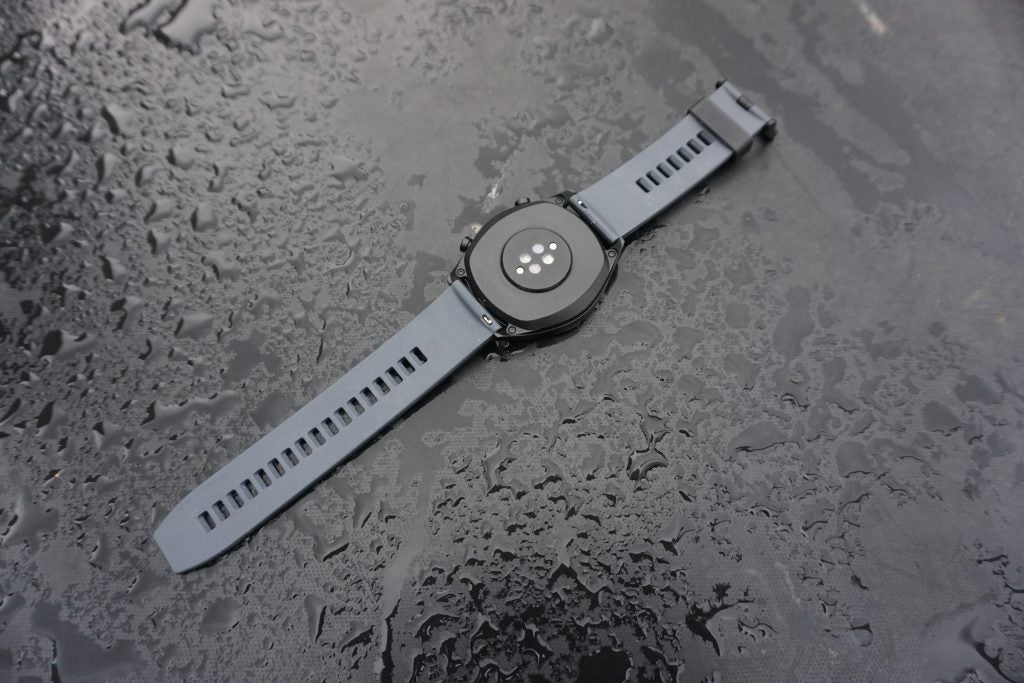 The inclusion of integrated GPS, GLONASS and Galileo support means that, on paper at least, the Huawei Watch GT should offer fantastic location and distance-tracking services.

Under the hood you’ll find all the sensors you’d expect from a dedicated fitness tracker. These include a optical heart rate monitor, accelerometer, gyroscope, magnetometer, ambient light and barometer sensors.

The 5 ATM water-resistance rating puts it on a par with most fitness trackers and means you can wear the device to depths of up to 50 metres, which will be welcome news for swimmers.

The only slight downside is that the watch doesn’t come with any local storage. This means you won’t be able to store maps or music locally – although at this price you’ll struggle to find a tracker that offers such an option.

The software is a custom build by Huawei that feels more like Garmin’s OS than a full-fat operating system such as Apple’s watchOS or Google’s Wear OS.

At first glance, the OS works fine. To get it working you simply install the Huawei Health and services app and go through a quick pairing process.

The menu that appears is pretty simple to follow. The main screen displays a simple watch interface – although there are a number of preinstalled custom UIs available that you may prefer, displaying more granular data for heart rate and step count, for example.

A press of the top physical button brings up a list of all the installed apps and functions. Pressing the bottom button once opens the fitness tracking menu, from which you can choose a variety of workouts ranging from running through to swimming and climbing.

Elsewhere, the controls are touch-based. Dragging down on the screen opens a Settings shortcut menu. Scroll up to check incoming notifications; left and right will take you through menus displaying your step count, the weather and your heart rate, for example. 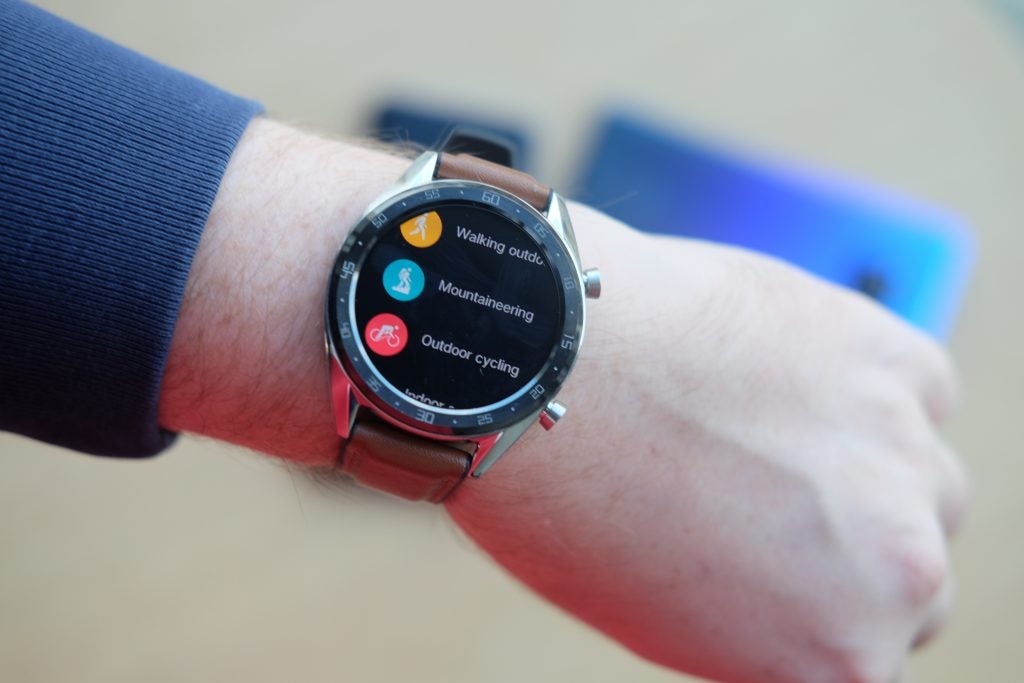 The interface is intuitive enough, feeling like an early version of Samsung’s Tizen OS. However, it quickly runs into problems if looking to engage smart functionality. For starters, there’s no music controller. Neither does the OS have any form of app library. As such, if you want some music to accompany your run, you’ll have to bring your handset along, using your headphones’ controller for management. Which is all a bit of a faff.

In addition, the software doesn’t work with many popular third-party apps, such as Strava. The only items aside of Huawei Health that I could pair the Huawei Watch GT with were UP by Jawbone, Google Fit and MyFitnessPal.

The limitations prove annoying, more so because the Watch GT is actually pretty good at fitness tracking. The GPS is snappy, never taking more than a minute or two to connect. Distance tracking data also proved accurate, with measurements never straying too far from those of the Garmin Fenix 5 Plus that I tested it against. The same was true of my heart rate data, which remained uniform and didn’t throw up any atypical results during testing.

For non-fitness fanatics, it’s a measurement of the level of oxygen your blood can store. The higher the number, the better. But to get an accurate VO2 reading, you need to go through a fairly unpleasant process in which you to run until you literally can go no further, all the while being hooked up to some lab equipment. 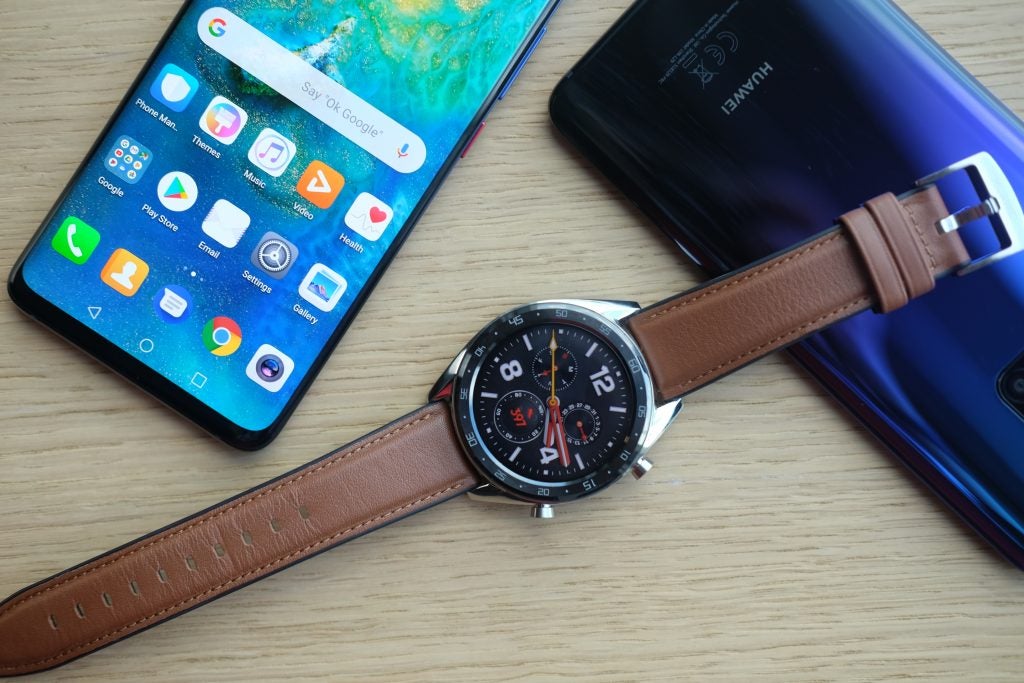 The VO2 figures you get from a wrist-based wearable won’t be anywhere near as accurate. However, if uniform they’re useful as a rough guide to your fitness, which is the case with the Huawei Watch GT.

Training effect uses your heart rate readings, plus some other biometric data, to estimate how productiveness of your workout. The app and watch display the figure during and after the session using a simple to understand colour chart that’s broken down into different zones. For example, blue indicates you were only warming up, while red shows you were really pushing yourself over the limit.

Neither feature is anything new – you’ll find them on most rival trackers – but they work well enough on the GT and will be useful for semi-serious athletes looking to track their overall progress. 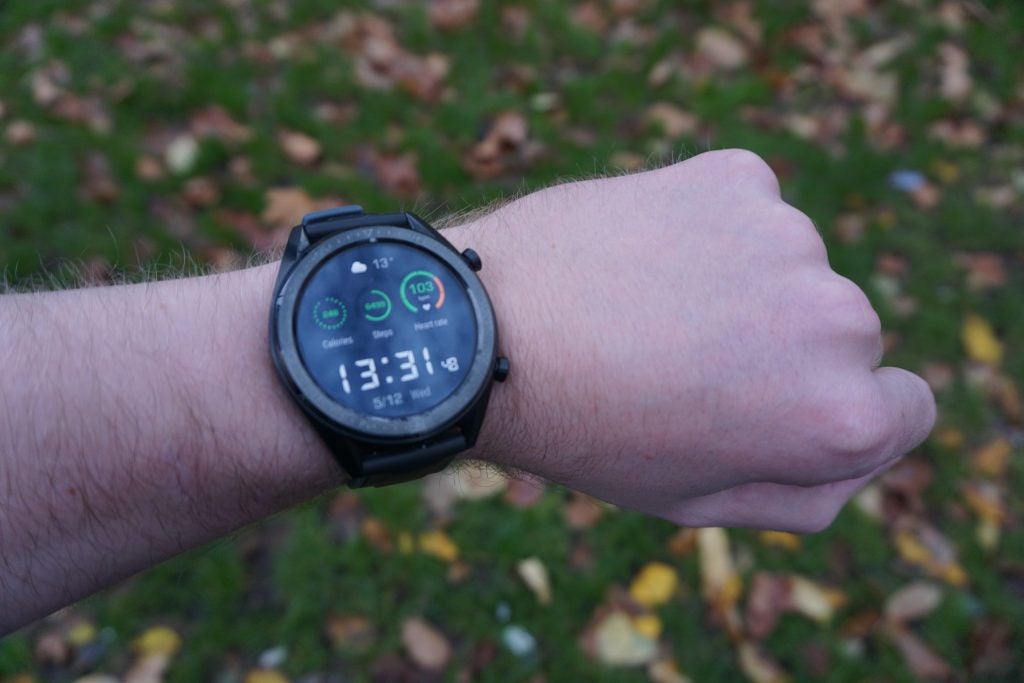 Huawei has made some pretty bold claims about the Huawei Watch GT’s battery. Specifically, the company quotes it as offering “14 days’ typical use”.

The quoted life is well ahead of smartwatches, which generally struggle to make it more than a couple of days following a single charge. With regular use I found the Watch GT generally lasted just shy of two weeks. Regular use entailed constant heart rate monitoring, notifications on, and three 5km runs per week with the GPS engaged. With the heart rate monitoring turned off and exercising indoors with the GPS off, too, I was easily able to push this to just over a fortnight of use.

Why buy the Huawei Watch GT?

If you want a decent-looking fitness tracker that you can wear outside the gym, too, then you could do a lot worse than the Huawei Watch GT. This is one of the more attractive trackers on the market for £200, and comes with all the sensors and hardware most semi-serious athletes will need to monitor performance.

However, its software means the Huawei Watch GT falls short of expectations as a smartwatch. The Lite OS doesn’t support many popular third-party apps and the absence of common features – such as a music player/control – makes it feel fairly basic.

As a result, those in the market for a smartwatch would do well to look elsewhere, considering the Apple Watch or Ticwatch Pro.

The Huawei Watch GT is a competent fitness tracker but sub-par smartwatch.