The Huawei MateBook D 14 should be considered by all students and productivity users, especially those for whom value for money is a priority. Student favourites such as the MacBook Air and Surface Laptop come in at prices of at least £300 more, and while you will get a better performance and display with more expensive options, the MateBook D is still comfortably quality enough to delight your average laptop user

Huawei recently launched its 2020 lineup of new products and, among the folding phones and uniquely coloured flagship laptops, you may have missed the reveal of some new mid-rangers: the MateBook D 14 and 15.

While the Huawei MateBook X Pro likely caught the attention of most during the recent launch event – with its stunning green colour options – the MateBook D 14 could just be a dark horse, and a cracking option for students.

The Huawei MateBook D 14 opts for a low price along with some modest components compared to flagship Ultrabooks, creating an appealing offering for those who don’t want to break the bank. But, does Huawei get the balance of price and features right?

The Huawei MateBook D 14 is a great-looking laptop, especially for the price. However, there’s no getting around the fact this device takes many cues from the Apple MacBook range – intentional or not. 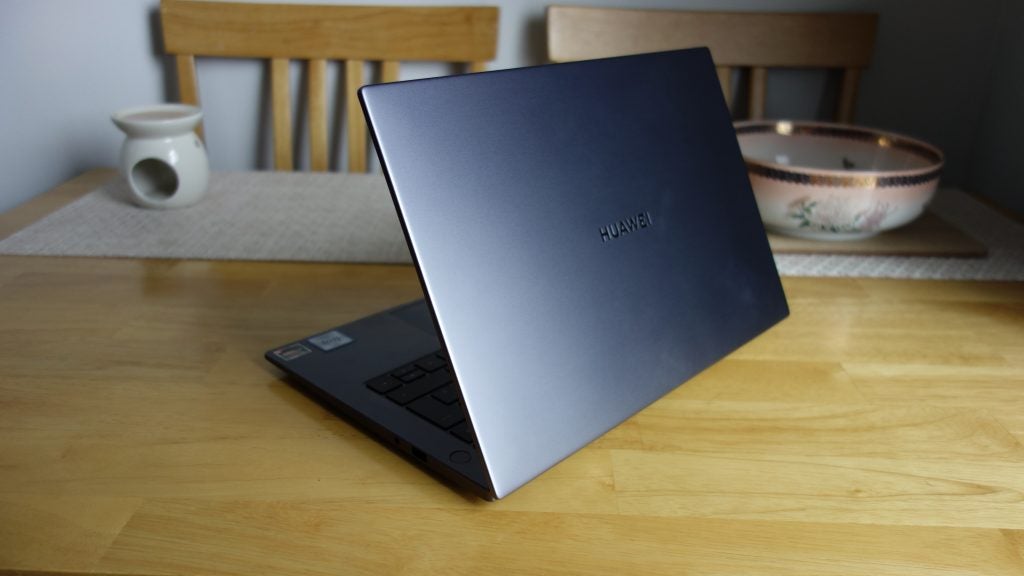 Nevertheless, Apple has some of the best-designed clamshells on the market, so there are worse companies to look to when modelling your devices. As such, the MateBook D 14 is a sleek laptop.

Primarily made of an aluminium alloy, the MateBook D 14 is suitably lightweight and sports a clean metal look. This is further acentuated by the single Space Grey colour option. 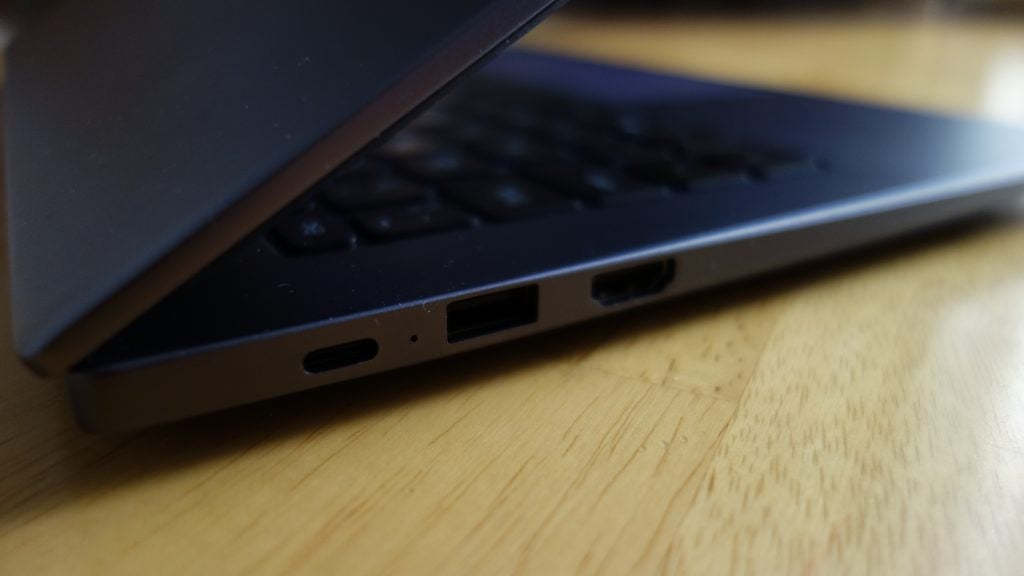 The Huawei MateBook D 14’s port provision is okay; it offers more than many laptops this size. There’s a USB-A 3.0 port, a USB-A 2.0 port, a full-size HDMI (the most impressive inclusion), a headphone jack and one USB-C.

The USB-C is for charging, and this makes me long for another USB-C port on the device – likely instead of the USB-A 2.0 port – to allow for two simultaneous USB-C connections. There’s also no Thunderbolt 3 support here, which would dramatically boost data transfer speeds and allow for video output.

The keyboard is another area in which the Huawei MateBook D 14 emanates MacBook vibes, particularly in terms of looks. Worry not butterfly switch haters – this isn’t what you get here. 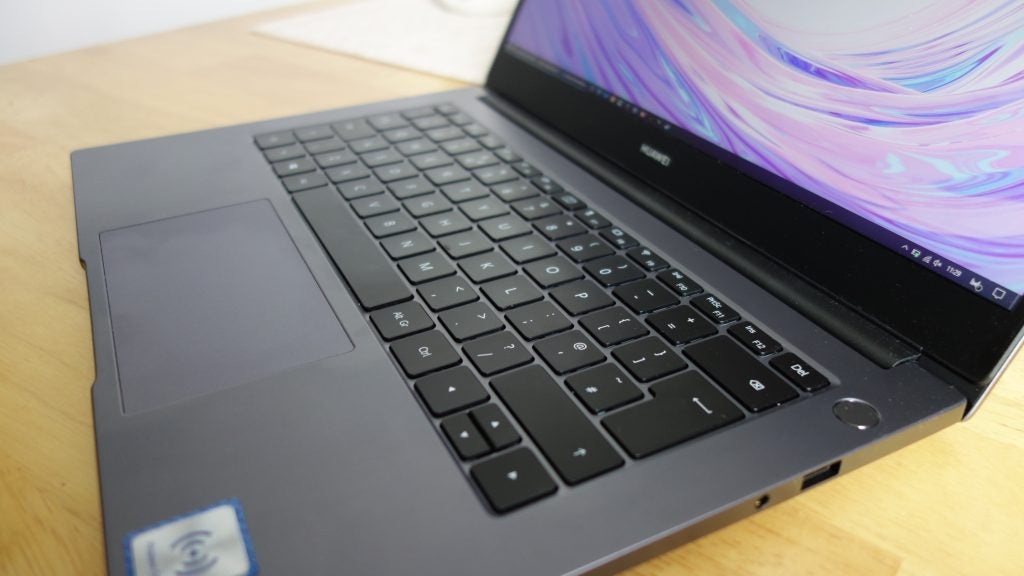 The MateBook D 14 keyboard doesn’t offer a huge amount of travel, but it isn’t so little that it will cause fatigue issues. The keyboard is also suitably tactile and clicky for such a thin device while managing to stay reasonably quiet.

Like many MateBooks before it, the webcam sits at the centre of the function keys and pops up when you click it. The angle is, of course, unflattering – but the change allows for slim bezels around the display and it’s nice to have just in case. 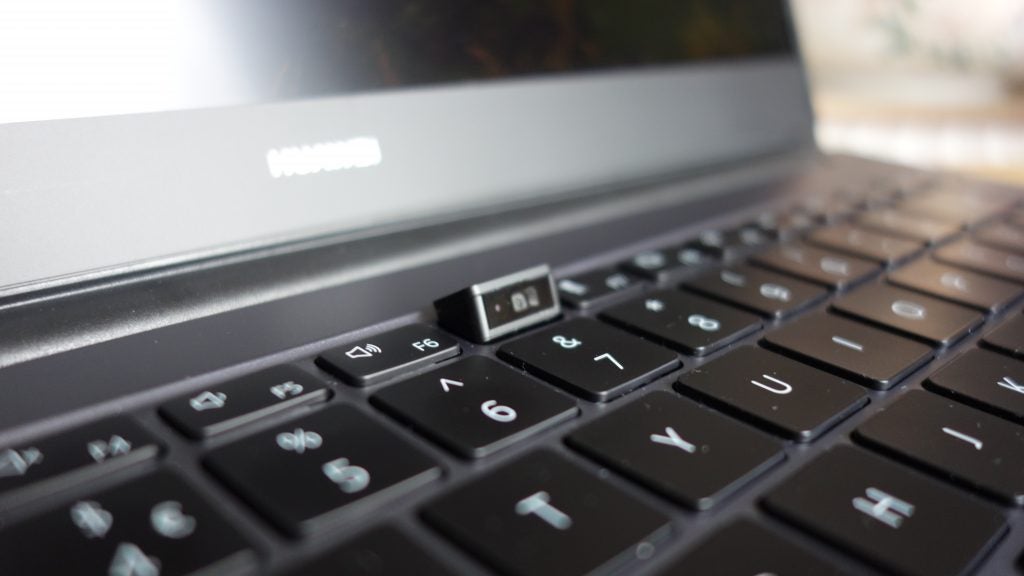 To the side of the keys sits the power button, which also acts as a fingerprint sensor. The sensor works as you’d expect, with no issues and negligible input lag.

The trackpad is an open and shut case. The MateBook chooses not to mimic Apple’s huge trackpad style here, opting for something more modest. In terms of performance, I’ve experienced no issues. The trackpad is responsive from corner to corner and offers a decent level of travel when pressed in.

Display panels can often be one of the more pricey parts when manufacturing a device. Its this area where it feels as though Huawei has made some savings, but that doesn’t mean it’s poor in everyday use. 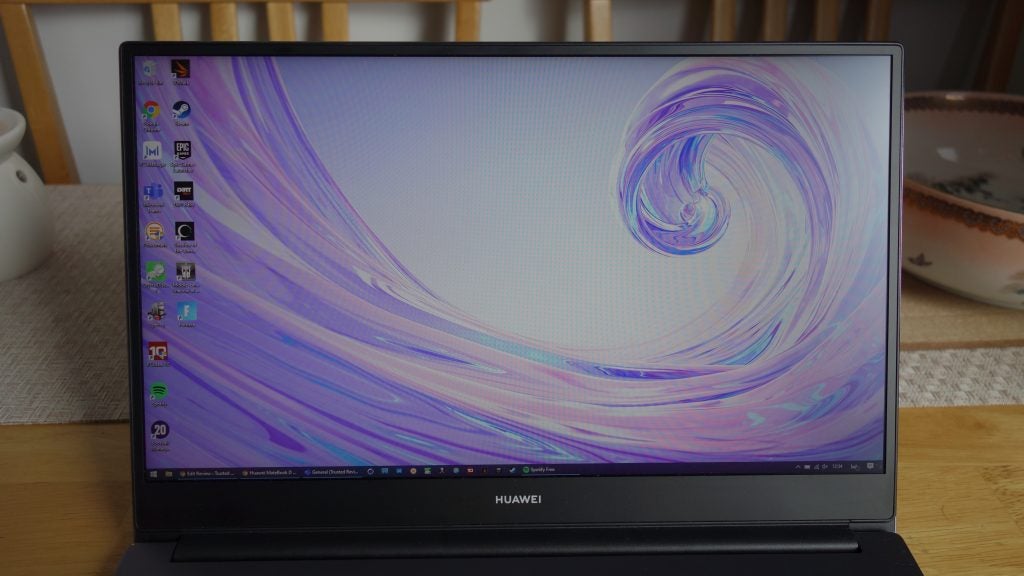 The brightness is good, but not great at 282.9 nits – I’d say you’ll struggle to use it in brightly lit conditions, but the matte display will help out greatly in this area.

Thanks to reasonably deep black levels though, the contrast comes in at a very respectable 1141:1. For the likes of Netflix and Disney Plus, this laptop’s display should be adequate.

When it comes to colour range though, our display benchmarks were quite poor. The tests came back at 59% sRGB, 41% Adobe RGB and 42% DCI-P3. In layman’s terms, this means you won’t really want to use this laptop for any design work that relies on colour accuracy. However, this doesn’t really hinder this laptop’s ability to cope with the basics of student life, such as web browsing and essay writing.

If you take a look at the spec sheet of the Huawei MateBook D 14, you’re unlikely to be blown away. To be honest, you might even be a little concerned about performance – but worry not.

The combo of the AMD Ryzen 5 3500U, 8GB of RAM and 512GB SSD offers a snappy experience that outperformed my expectations. For a student who might be running upwards of 10+ Chrome tabs and other productivity software, you’ll rarely run into slowdowns. I managed to have 20 tabs running before any sign of slowdown.

If you go for a pricier machine, such as the HP Envy 13, you might get more horsepower. However, for the student and productivity market, I’m not sure you’ll need more than what the Huawei offers.

On the other side of the coin, if you look to save money then the devices we’ve tested at around £100 less have shown reduced capability compared to the Huawei MateBook D 14. This Huawei offering sits at a level of performance that’s just right.

It goes without saying that gaming is off the table since there’s a lack of graphics card. Even low-intensive games like Fortnite won’t run well here, unlike with more premium ultrabooks that now feature powerful integrated graphics.

The Huawei MateBook D 14’s SSD speeds are surprisingly nippy with a read score of 3476 MB/s and write score of 1928 MB/s. These are both superior results to what you’d generally find from laptops a few hundred quid dearer, resulting in reduced waiting times when saving or loading data to/from your drive.

One anomaly that we did find with the SSD in the MateBook D 14 was a drive partition. The partition splits the default SSD drive into a sub-100GB drive and the rest of the storage in the other. We’ve contacted Huawei to clear up whether this is as standard, as this can be quite the hassle as the first drive will fill up quite quickly, and will update this review accordingly.

The Huawei MateBook D 14 features a 56Wh battery and, in our testing, it lasted just under nine hours. The test pretty much matches up with the 9.5 hours “all-day battery life” that Huawei touts. This is somewhat of a rarity; some company battery life claims often fall short in real-world use. 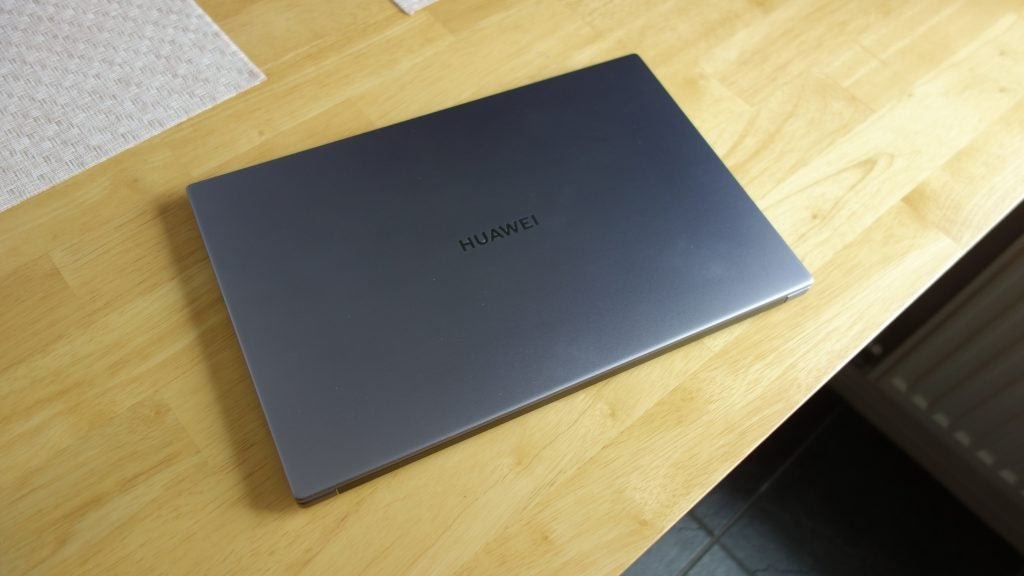 If you find yourself running low, then you’ll appreciate the MateBook’s speed of the charging. It’s able to add just under 50% of charge in half an hour – ideal for a student or worker who’s on-the-go.

Should you buy the Huawei MateBook D 14?

The Huawei MateBook D 14 could be a contender for one of the best (and most affordable) student laptops on the market today. It sits at a price point where it has little competition. Devices that are £100 cheaper, such as the Avita Liber 14, are worse performers. Then there are those devices that cost a couple of hundred pounds more, such as the HP Envy 13, which offer better benchmark stats, but may not be worth the extra cash for productivity users.

If you’re looking at these laptops then you’ll probably notice the Huawei MateBook D 15. The 15-inch version of this range is £50 cheaper, but comes with half the storage and a smaller battery. Unless you’re desperate for a 15-inch display, we’d opt for the 14-inch model every time.

The Huawei MateBook D 14 should be considered by all students and productivity users, especially those who prioritise value for money. Student favourites such as the MacBook Air and Surface Laptop come in at a price of at least £300 more. The MateBook D 14 offers a super-attractive price point at just £649, making it one of our top recommended options for students and those on a budget.