The Huawei Mate 30 is an impressive device that costs slightly less than its top-tier sibling, but it shares its major flaw: lack of access to Google apps and services.

The Huawei Mate 30 was unveiled alongside the top-of-the-line Mate 30 Pro. It may have garnered less headlines due to a slightly more modest specs sheet, but does this device offer better value for money?

We went hands-on with the Mate 30 to check its credentials as a slightly more affordable €799 (~£905) alternative to devices that have broken the thousand-pound threshold.

One factor where the Mate 30 scores a clear victory over the pricier Pro is screen size: 6.62-inches, rather than 6.53-inches. The 1080 x 2340 pixel resolution gives it a very similar pixel density as well, and the Mate 30 actually does a better job of maximising its available display, with a smaller notch at the top (26.6mm vs 32.8mm) and a smaller chin (4mm vs 4.8mm) at the bottom.

This version also has a flat screen rather than the curved “waterfall” design that creeps over the sides. This means that it does not distort content on the display and won’t register palm touches against the sides of your phone as input — in short, it’s more user-friendly, albeit a little less swish to look at.

When we tried out the phone, the display was very crisp, with the slightest details being very clear to view; the brightness of the OLED display was also very powerful, meaning that content was more than pleasing to view.

It’s safe to say that display quality will not be compromised if you plump for the slightly more affordable version of Huawei’s flagship.

Related: How to install Google apps on the Huawei Mate 30 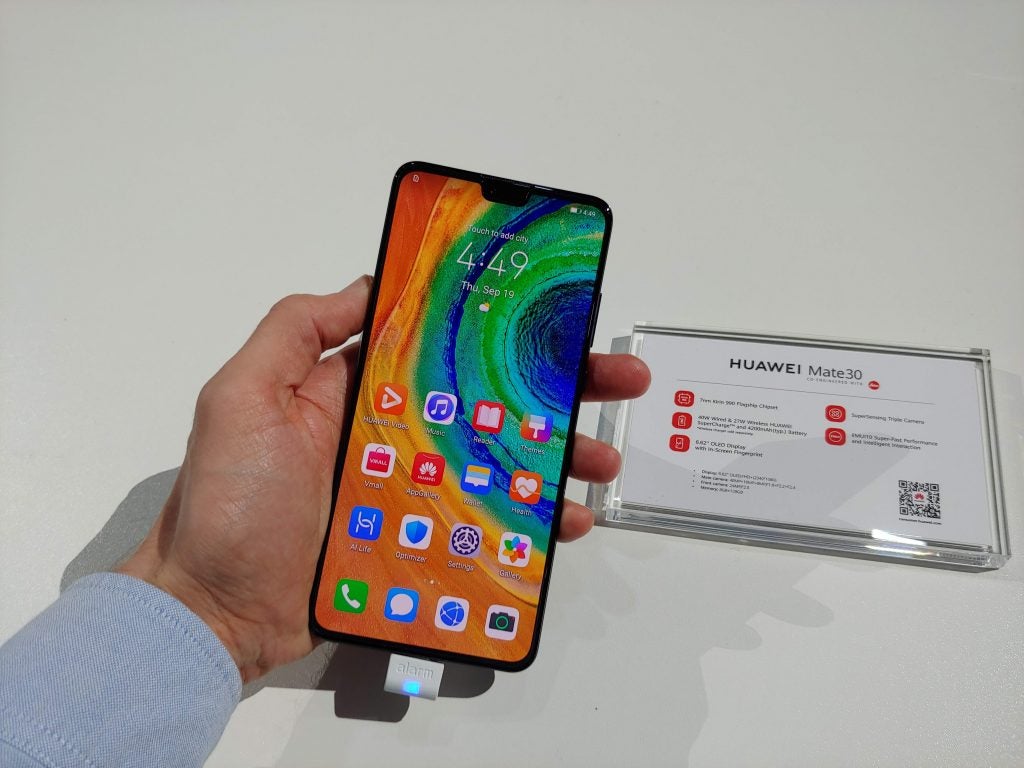 The Mate 30 has a glossy rear panel, with the cameras housed in a circular module surrounded by a light-catching finish. The premium finish is barely distinguishable from the Pro edition, although it’s very prone to picking up smudges and smears. The front of the device has a different design, most noticeably with the smaller notch and the flat rather than curved screen — both of which are often preferred by consumers.

The reason for that smaller notch on the front is apparent — there are fewer sensors packed in, so you won’t be able to use the neat new gesture control system that’s made its debut on the Mate 30 Pro and allows you to dictate actions without touching the screen. But at this stage the system still feels a little gimmicky, so it didn’t feel as though you’d be missing out.

Another design difference that’s likely to go down well is the retention of the 3.5mm headphone jack, which users often find to be more convenient than relying on Bluetooth headphones or a dongle. The cost of this decision is a lower water resistance rating (IP58 vs IP68), but in terms of design alone, the Mate 30 arguably is the better device in the series. 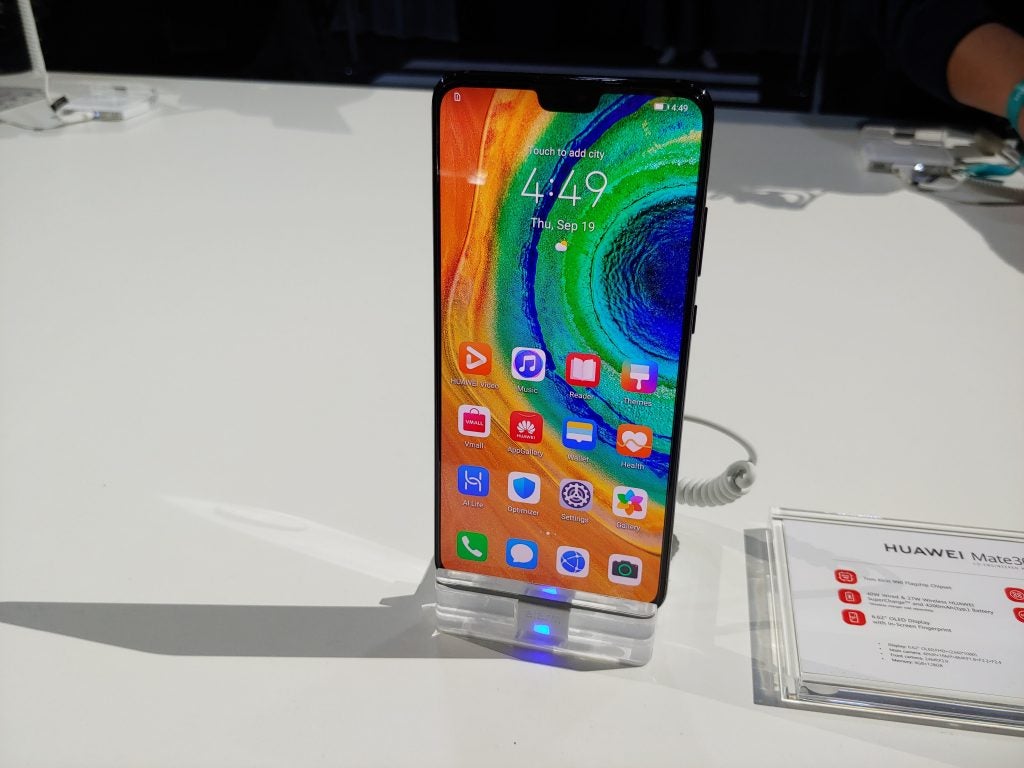 The Mate 30 has three rear camera sensors: a 40-megapixel f/1.8 main snapper, an 8-megapixel telephoto sensor, and an ultrawide lens with a 16-megapixel resolution. This latter specification is inferior to the 40-megapixel version on the Mate 30 Pro (which also houses an additional Time-of-Flight sensor), but it’s still an impressive array for a smartphone.

Taking pictures with the Mate 30 was a pleasure, with the camera providing very sharp snaps and a good colour balance across different lighting conditions. The three different lenses offer strong versatility depending on the type of pictures you like to take. Selfies look great too, as the 24-megapixel sensor captures details well and a Time-of-Flight sensor helps Portrait Mode really pop to life.

Huawei Mate 30 Software – Can it survive without Google?

The Mate 30 runs on an open-source version of the latest Android 10 operating system, with Huawei’s EMUI 10 skin overlaid. It feels very familiar to previous Huawei handsets, but with one key, obvious difference: there are none of the familiar Google apps usually pre-installed as standard due to the current ban in place from the US government.

You won’t have access to the Play Store to install many of your favourite apps either, with just Huawei’s lacklustre App Gallery taking its place. This could very well be a dealbreaker for many customers, as you’re left deprived of the best and frequently used apps unless you turn to creative workaround solutions.

The Huawei Mate 30 is a great smartphone, that arguably offers better value for money than the Pro device and boasts a design that many users might even find preferable – but its lack of Google apps is a big blow to its appeal.