Huawei phone owners may be keen to take advantage of the synergy the FreeBuds 3 offer. For everyone else, however, there’s no compelling reason to opt for the FreeBuds 3 over competing true wireless earbuds – much better-sounding efforts are available.

Huawei takes on Apple’s AirPods with the FreeBuds 3. Using the same open-fit design and boasting active noise cancellation, the FreeBuds will probably appeal to Huawei smartphone users more than most.

UPDATE: The AI Life app is now available to download in the Google Play app store. The copy has been amended to reflect this.

When Huawei announced its FreeBuds 3, interested observers viewed them as a potential AirPods killer, with the inclusion of active noise cancellation cementing their promise.

So it’s perhaps poor timing that they launch not long after the AirPods Pro, which carry a different design and also have active noise cancellation. The FreeBuds have had their thunder stolen.

This third version packs in some interesting features, yet there are aspects that are less than welcome.

If imitation is the sincerest form of flattery then Apple must be blushing. The FreeBuds 3 have more than a passing resemblance to the AirPods (2019), though there are some slight differences that make them not quite a carbon copy.

Their in-ear section is more bulbous, but the stem is present and Huawei has opted for a loose, open fit. There are obvious compromises: the lack of a seal means noise isolation is poor and using them on the London Underground has audio competing with a flood of noise. 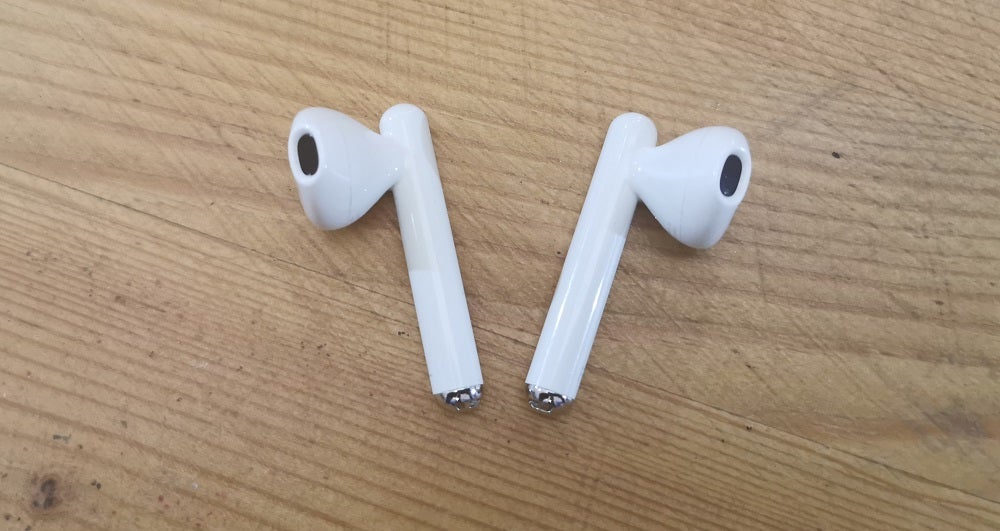 Touch controls are available on both earbuds, with a double tap on the left activating the active noise cancellation (ANC), and the right side play/pause/skip controls. It mostly works, though there are times where a double tap doesn’t register.

At 4.5g for each earbud, they’re very light – you won’t feel them hanging off your ear – and they come in Carbon Black or Ceramic White finishes. While there’s nothing too distinctive about the FreeBuds 3, they’re not bad looking.

FreeBuds 3 features – Huawei smartphones will get the best out of the FreeBuds, not so much for everyone else

The charging case is again similar to that of the AirPods, though its rounded edges give it the look of a Babybel snack.

The FreeBuds 3 have 4hrs of battery life, down on the AirPods’ 5hrs, with the charging case holding another four charges for 20hrs in total.

Again, that’s less than the AirPods’ 24+hrs, though that likely won’t be a huge consideration unless you’re constantly using them. Charging feels super-fast when plugged in with a USB-C cable, and they’re compatible with Huawei’s wireless charging mat, too. 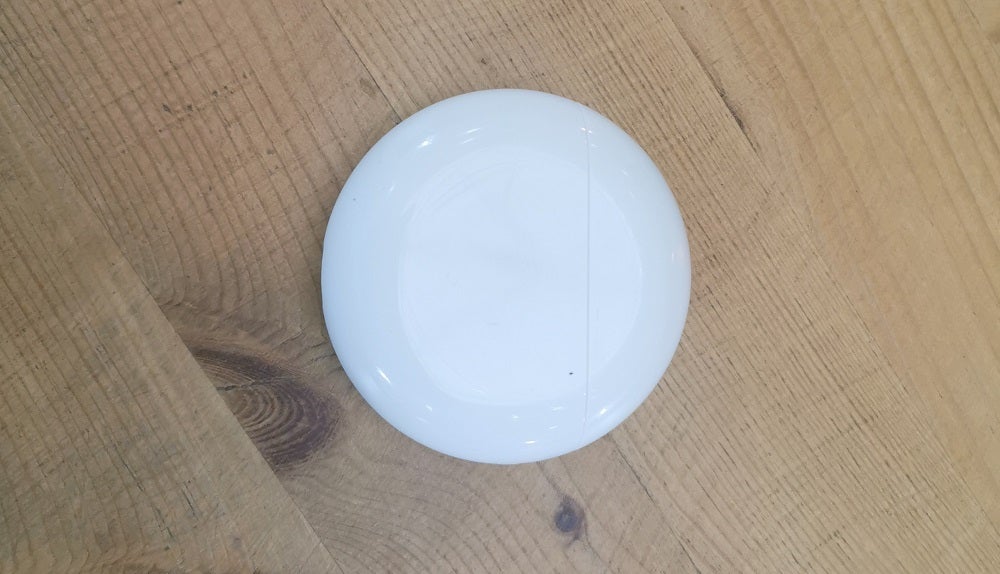 Pairing is very simple – just press the button on the side of the case to put them in pairing mode. If you have a Huawei phone (in this case a P30 Pro), the FreeBuds will swiftly pair up thanks to the new A1-chip.

The A1-chip boasts Bluetooth 5.1 support, which helps the impressive wireless range and, while Huawei hasn’t released any figures, they remain sticky over long distances – at least when paired with the P30 Pro – before the signal conks out. 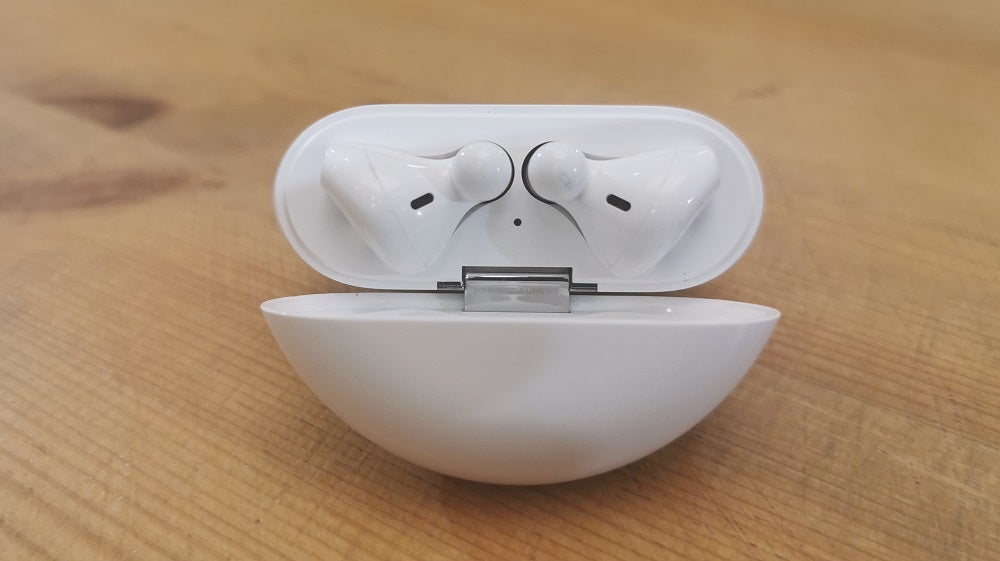 There is a control app in the form of Huawei’s AI Life, which is now available to download in Huawei’s App Gallery store and Google Play Store.

Its appearance on the latter means non-Huawei Android phone owners won’t need to scan the QR code on the back of the FreeBuds 3 box to download it.

If you’re an Apple user, you needn’t to bother, as the app is not available.

The AI Life app is where you can check battery life, change the touch control settings and adjust noise cancellation levels. 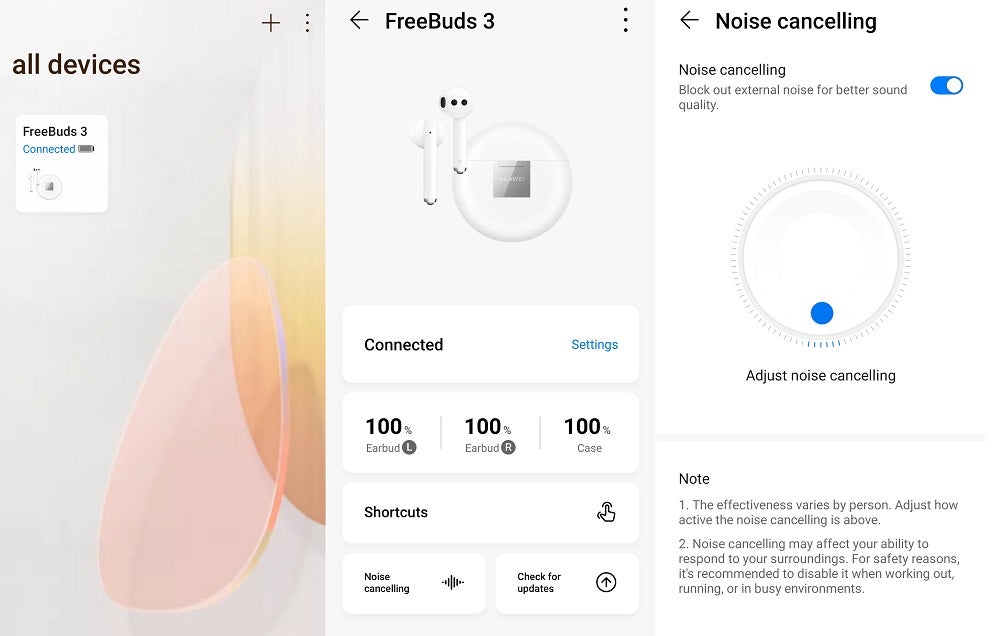 And it’s with ANC where things start to go awry. The loose fit is an odd choice for an ANC earbud – a good seal for noise isolation and ANC go hand-in-hand – but even so, the performance the FreeBuds 3 offer is meagre.

Even with the AI Life app to increase ANC levels up to 15dB, it never feels as though ambient sound is reduced significantly. With music on or not, I could still hear people chatting or tapping away on their keyboards.

The performance is best summed up by my experience of tapping the left earbud to activate ANC, not realising it was on and turning it off.

FreeBuds 3 sound quality – Adequate in some ways, perfunctory in others

Matters don’t improve with the audio. Despite Huawei promising “punchy bass” and “crystal-clear” sound with its 14mm dynamic driver, throwing out impressive figures such as 2.3mbps data transfer rate for High-Res audio, the end result is just adequate.

Let’s start with the positives first. Vocals have clarity. Sting’s voice on the track It’s Probably Me is coherent and listenable, if slightly on the dry side. 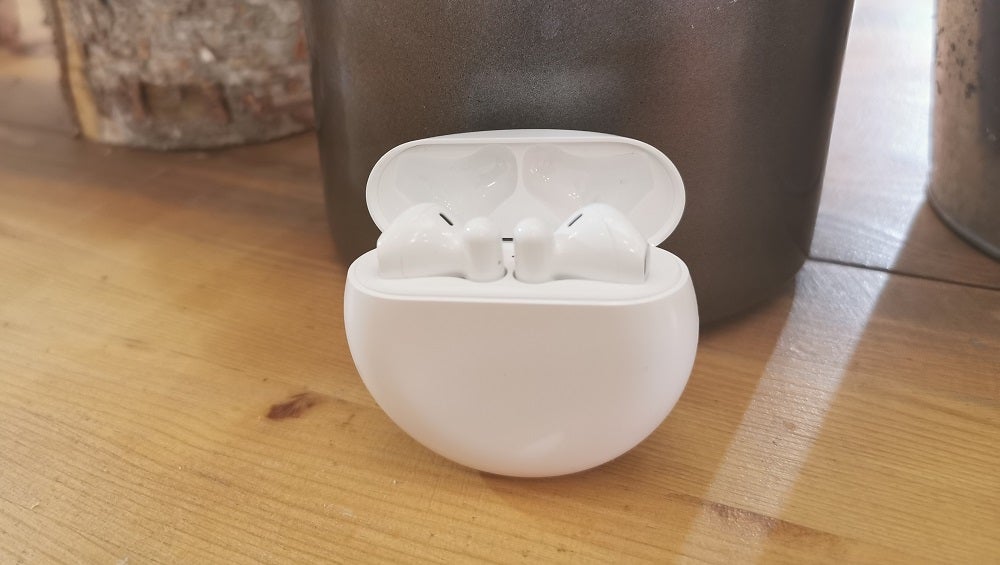 Bass levels are OK and not much more than that, sounding fairly indistinct and almost morose in some songs. Stereo imaging is again OK, though the FreeBuds 3 lack a sense of punch and presence.

The same applies to watching video on YouTube, with voices very clear, and the syncing between the video you see and the audio you hear perfectly fine. And that’s about it for the pros.

The cons? The soundstage is small, tinny and sparse sounding with no real sense of depth. Dynamics aren’t really pronounced either, with highs not much more expressive than the lows. 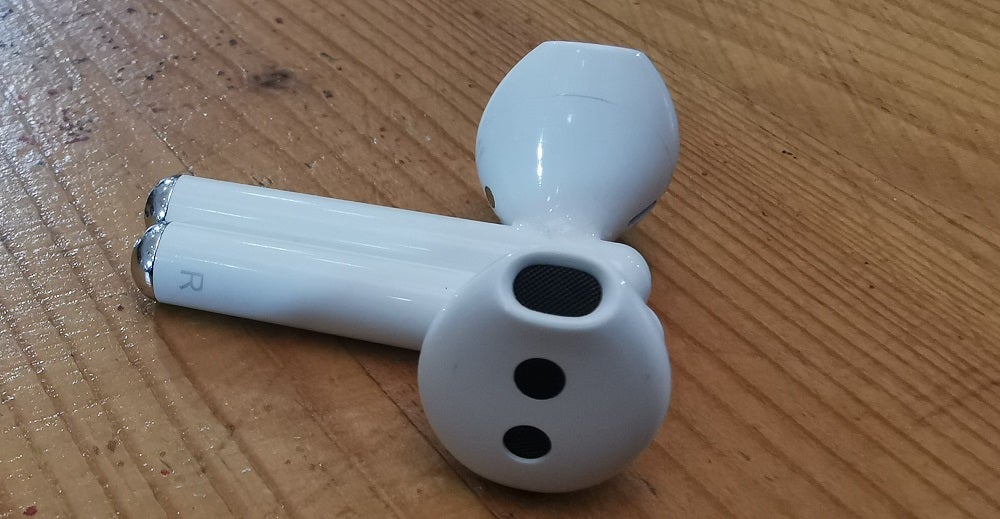 Turn the volume up to add some scale and weight to The Rolling Stones’ Tell Me on a Tidal Masters stream and it struggles to be more than clanging clash of noise, with little in the way of separation and detail. The notes in the upper midrange can be harsh too, requiring a drop in volume to more sedate levels.

There’s a lack of energy and zip to the whole affair too. Playing Childish Gambino’s album Awaken, My Love!, tracks like Boogieman and Zombies have a low-energy feel.

Fire up a play of Threshold from the Scott Pilgrim vs The World album – quite the cacophonous track – and the FreeBuds struggle with establishing a sense of detail, timing or tempo. The coarse, shallow sound is at times is quite hard to listen to.

In general, the sound is rather inoffensive and bland, and neither here nor there. There are in-ears, both wireless and wired, that are much cheaper than the FreeBuds 3 and offer more scale, weight and bass.

Should I buy the FreeBuds 3?

From an audio perspective, the FreeBuds 3 are lacking. They are the world’s first in-ear with an open-fit design and noise cancellation, but the noise isolation is inevitably poor and ANC is weak.

For Huawei phone owners with the EMUI 10 interface, it makes some sense. The FreeBuds 3 are built to take advantage of what they offer – the 2.3mbps audio transfer rate is apparently only with Huawei phones.

The speedy pairing works best with Huawei phones and the AI Life app is Android only, so iPhone users won’t have as much control.

If you’re after true wireless earbuds with ANC, you could do worse than the Libratone Track Air+. They have in-ear design, are very comfortable and the smart ANC removes up to 30dB of noise. It sounds much better too and only costs £10 more, at £179.