The HP Stream 11 is a laptop aimed predominantly at students, and it’s available for an extraordinarily low £179.99. For that you get a portable 11-inch laptop that even includes an Office 365 subscription worth £59.99 – it’s one of the key things that makes it perfect for students.

While it’s undoubtedly a basic machine, the HP Stream 11 isn’t as plain as you might expect. The speakers and battery life are excellent for the price, and it’s not bad-looking either. However, the 11.6-inch, 1,366 x 768 display is a weak point. Would you be better off shelling out a bit more cash on the Full HD screen of the Toshiba Chromebook 2? Possibly, but this remains an outstanding deal for a very good laptop.

The HP Stream 11 is a cute little thing. It comes in two versions, ‘horizon blue’ and ‘orchid magenta’ – our review sample came in the former colour scheme. It stands out and in a good way – the child in me rather likes the bold, friendly blue design.

The plastic itself is soft to the touch, and any sweaty marks it picks up from clammy fingers fade away in seconds. An HP logo cut from a piece of shiny silver metal sits in the centre of the lid, while four rubber feet sit on the bottom and stop the PC from sliding around on table tops.

It lacks the elegance of something like the Lenovo ThinkPad X1 Carbon 2015 or MacBook Air, but the Stream is fun and visually pleasing. Too many budget laptops come wrapped up in dull silver or grey – a bit of variety is a very welcome change.

What you’ll find when you open the HP Stream 11 up is less attractive. The bezels on all sides of the screen are large and the base unit is clad in a two-tone, PowerPoint-style gradient effect. The top face of the keyboard dock closest to the screen is the same blue as the rest of the PC, but the side closest to the trackpad is turquoise. It looks naff, and is reminiscent of FC Barcelona’s ugly 2012/13 away kit. What’s more, it’s dotted in a load of small, silver spots. What inspired this look is beyond us, because it’s not great. 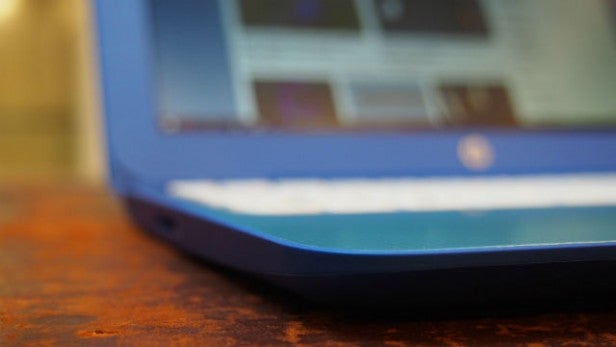 In this position, it’s apparent that build quality isn’t sublime. The plastic frame that surrounds the keyboard element is sharp and not quite flush with the top of the base. It felt rough on our palms and wrists when we typed and produced a scratchy sound whenever we rubbed against it. We also noticed that lots of flecks of dust got caught in the little gap between the frame and body almost immediately.

The screen element feels a little flimsy, and is easy to bend with your fingers. The hinge also allows you to force the screen several degrees further back than it should go, which isn’t reassuring. That said, the design and build quality is still above average for a laptop this price.

While it’s light, at 1.28kg, it feels a little heavier than it is. That’s due to the fact that it’s essentially an 11-inch laptop in the body of a 13-incher. The 11-inch MacBook Air is significantly lighter, at 1.08kg, but it also costs several times as much as the Stream 11. We found it fairly comfortable to balance on one hand while typing with the other for a few minutes at a time. For the price, we have no complaints.

You won’t have any problems carrying the Stream around with you, either. It’s only 19.7mm thick and at 300mm wide, it’ll fit comfortably into any rucksack or messenger bag. Just make sure you don’t stick it in the same compartment as your house keys, because the plastic body is prone to picking up scratches.

A strong selection of ports is available on the base. USB 2.0, USB 3.0 and HDMI slots sit on the right side, while the charging port, SD card slot and Kensington security lock are on the left. Vitally, any SD card you use doesn’t stick out at all – this means you can expand the limited 32GB built-in storage without inconvenience. 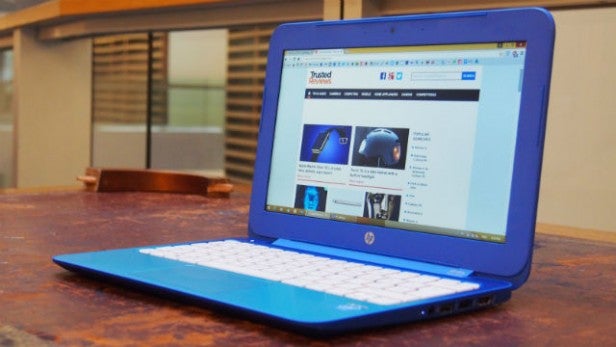 The screen of the Stream 11 is nothing special. It’s an 11.6-inch, 1,366 x 768 affair, and it can’t hold a candle to the Toshiba Chromebook 2’s bright and vibrant 1,920 x 1,080 IPS display. It’s a little grainy when looked at closely – certainly compared to most mobile phones – but it’s typical of laptops this price.

Brightness is also an issue, though. We think it could with a couple of levels above the top setting it offers. You’ll struggle to use it outdoors during the day, despite the fact that the non-glossy screen has an anti-glare coating. It’s fine indoors, though.

Colours are really washed out, with the brightest of reds looking pink and the juiciest of oranges appearing slightly beige. Subtle differences in the brightest colours don’t show up either, making everything look a little soft. Black levels are poor too, with even the deepest of shadows looking grey. 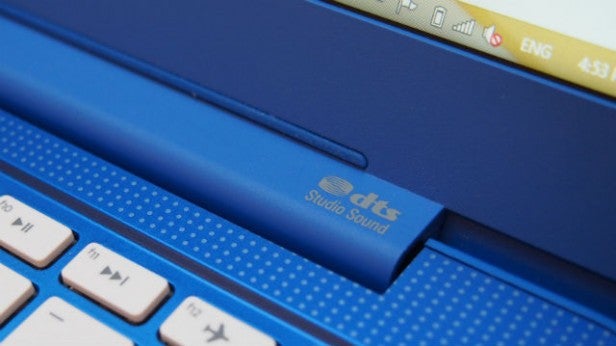 Viewing angles are quite good, however, so you’ll still be able to hold mini movie screenings with a friend or two. Ultimately, the screen is exactly what we’d expect from a laptop this cheap. The important point is it’s good enough for the Stream 11 to remain useable.

DTS provides the audio, which is delivered through a pair of stereo speakers that sit on the bottom of the base, towards the front edge of the Stream. They’re impressively loud too, making the Stream 11 good for listening to music – I could hear the lovely tones of Marvin Gaye two rooms away.

They can also stand up to the sound of a noisy shower, which is good, and you won’t need to go anywhere near the top volume setting with a pair of headphones plugged in. The only downside is that, due to the placement of the speakers, they’re prone to getting muffled when you place the Stream 11 on a soft surface, like a bed.