What is the Toshiba Chromebook 2?

We think the Chromebook 2 is even better than the first, too. Chromebooks are generally cheap and cheerful but are hampered by dull design and poor quality screens. The Chromebook 2 is different. It’s attractive, has an excellent screen and is outstanding value for money. Read on to find out why we like it so much.

The Toshiba Chromebook 2 is a well-proportioned laptop that’ll easily slot into a standard messenger bag or backpack, and its 1.35kg weight means that carrying it around won’t be a struggle. At 320mm wide and 214mm deep, it’s about the same size as a 13-inch MacBook Air, and at 19.3mm thick it’s only slightly thicker, too. That’s damn impressive given it costs a fraction of the price.

It’s similar in shape to most modern-day laptops, and has clearly taken design tips from the MacBook Air. The Chromebook 2 has lots of curved corners and a chunky base that tapers to a point at the front side. Clad in silver-coloured plastic, it’s simple but good-looking and the dot pattern on top adds texture and ensures it stands out from the crowd.

It doesn’t feel particularly solid, though. We could easily bend the screen element by applying a little pressure to the lid with our fingers. This distorted the display, with blue, abstract-looking fingermarks appearing on-screen. We think we could seriously damage it with our hands alone if we tried. However, it survived a night out in London completely unscathed, despite being knocked about in its bag quite often.

Connections are basic, but ample. On the left side are the charging port, micro USB 2.0 and SD card slot. HDMI-out, the headphone jack, a Kensington security lock and the USB 3.0 slot sit on the right-hand side. The latter supports sleep-and-charge, meaning that devices plugged into the slot charge even when the Chromebook 2 is asleep – a handy feature when you need it. 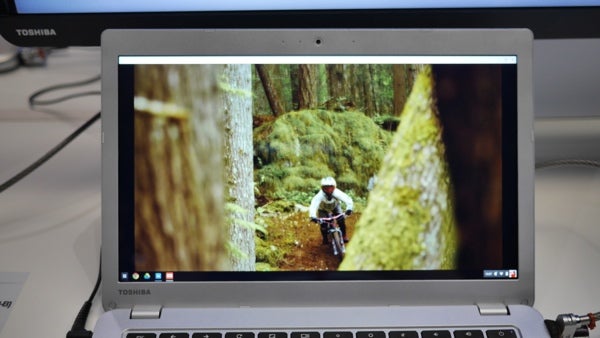 Colours are rich and bright, and the quality of blacks is very impressive for such a cheap laptop. It’s great for watching films on. Viewing angles aren’t as good – brightness drops and colours distort the wider you go – but three people can watch a films on it without huge difficulty.

It’s lovely and bright too, topping out at 300 nits. You won’t need to blast it up to its highest setting indoors, but you will if you plan to use it outside in the sunshine. This worked fine for us, and the display’s coating seems to reduce glare from the sun, which is handy too.

The speakers are tuned by Skullcandy, and are completely invisible because they’re hidden beneath the keyboard. Sound quality is impressive. The speakers are loud and deliver a really crisp sound, making the Chromebook 2 great for listening to music and watching TV on. It easily overpowered the loud whirring of the washing machine in the next room. 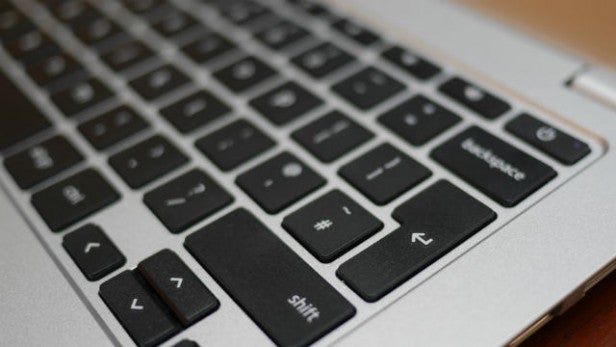 The Chromebook 2 has a black tile keyboard that is slightly different to the ones on Windows PCs and MacBooks. For example, there’s no Caps Lock, Delete or Print Screen here. This takes a little getting used to, particularly the loss of the Delete key, but you’ll get used to it.

On the whole, the keys are a good size and are spaced far enough apart to make quick typing nice and easy. They offer a good amount of travel, too. We found the narrower than normal Enter key slightly awkward – it’s easy to accidentally press down on the hash key (#) instead – but it’s not the worst we’ve used. We miss the backlighting of pricier laptops, but you can’t complain about this on a £250 machine.

Above the numbers row are 10 buttons that control settings and functions, flanked by Escape and the Power. These are all marked with different icons, most of which are instantly recognisable. There’s a left-pointing arrow to go back and a large symbol of the sun to increase brightness, for instance.

The three volume keys (up, down and mute) are a little annoying to use, though. Hitting the mute button twice doesn’t mute and unmute, as you’d expect it to. Instead, you have to press the volume up key to turn sound back on. It’s a minor issue, but an irritating one. 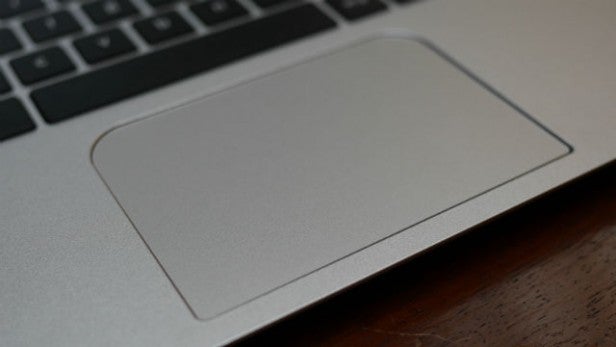 The trackpad is large and excellent to use. It feels solid, offering a good amount of resistance when you’re clicking. Moreover, like the MacBook Air, it doesn’t have separate buttons for right and left click. Instead, clicking with one finger activates the left click, while clicking with two fingers activates the right click. We like this system better than the clumsy systems employed on many Windows laptops.

The trackpad supports a wide range of gesture controls, too. Swiping right with two fingers takes you to the previous page, while doing the same in the opposite direction takes you forwards. Swiping with more than two fingers allows you to switch tabs, and swiping up with three fingers displays all of the windows you have open at any time. These all worked perfectly for us, and they’re surprisingly easy to remember once you start using them regularly.