HP claims that the three-cell Lithium-ion battery inside the Stream 11 will deliver up to eight hours and 15 minutes of life before it requires charging again. It just about delivered, too, as it managed just over eight hours of web browsing and YouTube viewing.

However, we were particularly impressed with its endurance under heavy strain. It lasted six hours of playing iPlayer and YouTube videos with the screen at maximum brightness and the volume at 80%.

It’s also a fast charger, going from flat to 24% in just 30 minutes. That would theoretically give you just under two hours of mixed use, or almost 90 minutes of heavy use. 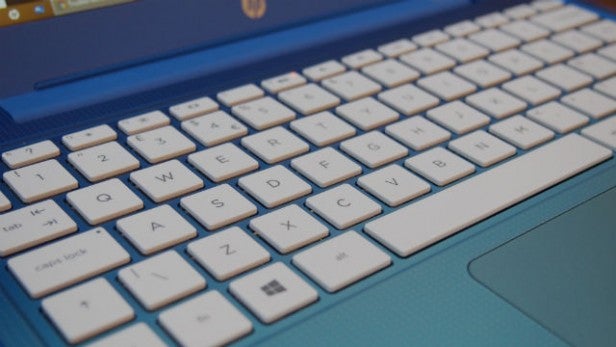 We’re fans of the Stream 11’s island-style keyboard. The keys are spaced apart nicely and look crisp and clean, with the white of the individual buttons standing out nicely from the blue dock. The four corner keys (Escape, Delete, Control and the right-pointing arrow) are pleasantly curved and easy on the eye. Our unit’s Escape key didn’t sit completely straight in its groove, looking a little wonky, but it worked fine.

It’s a good keyboard to type on, too. All of the buttons offer a nice amount of travel, which allows for speedy, accurate typing. The only niggles are that it’s not backlit and the Shift key on the left-hand side is quite small, so it’s easy to accidentally hit back slash () instead. On the whole, it’s a quality offering. 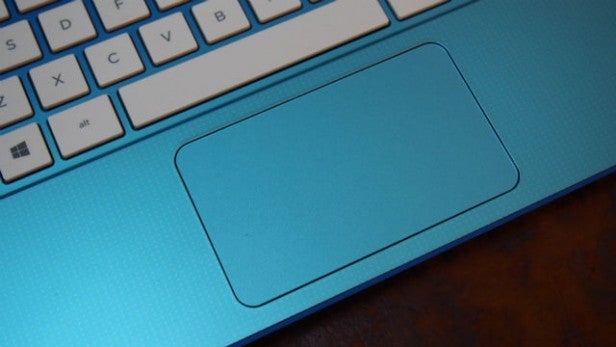 HP’s ImagePad trackpad is not quite as likeable. While it’s well-sized and offers a good level of resistance when you click, it feels cheap and flimsy. When we pushed down on it with any force, the plastic around it flexed too.

We also had issues with gesture controls. Since the Stream runs on Windows 8.1, swiping in from the right side of the trackpad is supposed to bring up important options like Search and Settings. However, doing this successfully often took us several attempts. 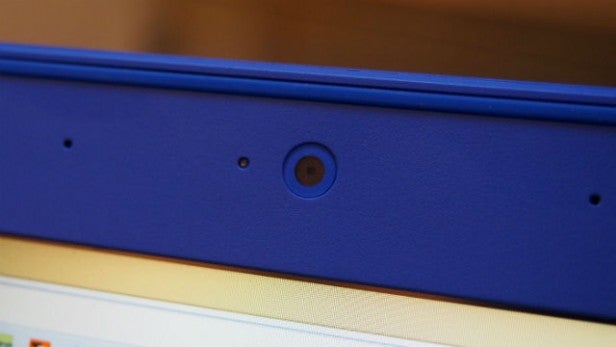 Camera quality may not be as crucial to a laptop as it is to a smartphone, but it’s still an important feature, especially if you’re a keen user of Skype. The Stream 11 makes use of a front-facing HP Truevision HD webcam, which delivers pleasantly surprising results.

While colours look fairly washed out and pictures lack fine detail (possibly a blessing in disguise, since pockmarks pass under the radar), the camera is more than good enough for video calls. It struggles in low light settings, but so do the webcams on far more expensive laptops. 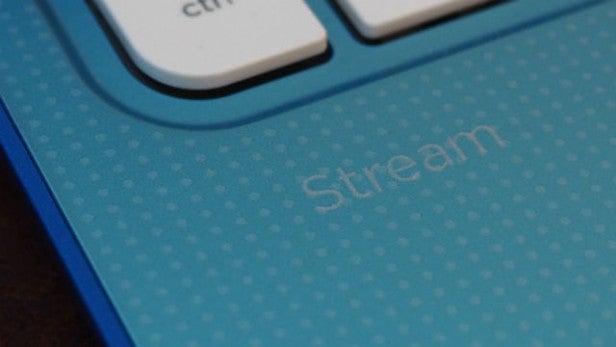 Should I buy the HP Stream 11?

Yes, if you have to stick to a tight budget. For £179.99, the HP Stream 11 is ridiculously good value for money for a Windows laptop, particularly considering you get an Office 365 subscription worth over £50 with it.

Key features like battery life, speaker quality and design all left really good impressions on us, and ensure the Stream 11 will serve almost any student well. It might not allow you to watch all of the Rocky films back-to-back, but it’s more than good enough for casual entertainment and work.

The only area of genuine concern is the screen – it’s a little dull and hard to use outdoors. This much is to be expected on such a cheap laptop, but the next best alternative – the Toshiba Chromebook 2 – is £70 more and doesn’t run Windows. It has a stunning 13.3-inch 1080p screen, but if you need Windows – or don’t want to spend more – we can’t think of a better option than the HP Stream 11.

Students on a budget can’t go wrong with the HP Stream 11. Its screen is only so-so, but everything else is very good for the price.