What is the HP Pavilion x2?

Available in time for the start of the academic year, HP’s Pavilion x2 is an affordable two-in-one targeted primarily at students. Its special hinge allows you to use the x2 in a variety of positions, making it very versatile indeed.

Is it worth your money? While battery life and performance are strong points, we’re not so impressed with the display and trackpad. It’s certainly worth considering though.

The HP Pavilion x2 is a dainty little thing. Roughly the size of a notepad, it’ll easily fit into a messenger bag or rucksack, making it an ideal choice for users that like to work on the go.

With its compact form factor and curved corners, it looks friendly and inviting, but this positive first impression fades a little when you first pick it up. The x2 is clad from head to toe in cheap-feeling plastic, which lacks that finger-friendly, soft-touch quality found in the better non-metal models on the market.

That said, it still feels robust and durable, as if it would survive everyday bumps and scrapes. Indeed, a week of being carried around in a congested rucksack left neither a scratch nor a scuff mark on the x2’s exterior.

The physical buttons tell an entirely different story. Like the chassis, the power button, volume rocker and Start key are plastic and grey, but unlike the chassis they’re also flimsy, far too shallow. They also wobble around loosely in their cutouts, and there’s no satisfying click when you push them.

However, durability and looks aren’t the x2’s headline features. Instead, the magic lies in its specialised hinge. 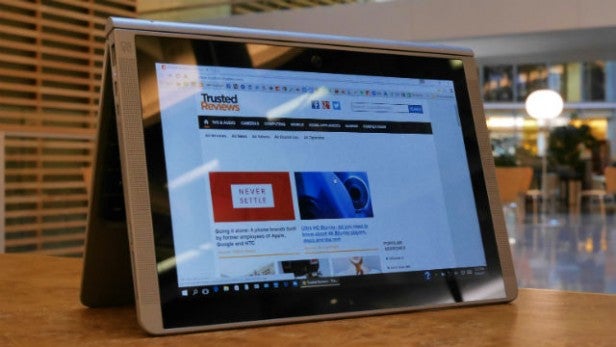 Since it’s a convertible, you can use the x2 as either a tablet or a laptop, depending on what suits you. The screen element, which weighs 580g, can be attached to or detached from the 600g keyboard via a magnetic hinge.

As a laptop, the x2 is 19.8mm thick. That’s impressively slim, considering how cheap it is. After all, the similar-priced Acer Aspire Switch 11 is a far flabbier 25mm thick.

In use, the screen holds steady in all positions, thanks to the stability of the hinge. However, when you push it back as far as possible and then prod the display, the entire unit tips backwards. This is unfortunately a common issue with two-in-ones, but we’re still disappointed to see that HP hasn’t managed to remedy it.

As a tablet, the x2 may not be razor thin, but it’s still comfortable to hold. At 9.6mm thick, it again trumps the Switch 11, which measures in at 10.6mm. Even the tiny Toshiba Satellite Click Mini is 2mm fatter than the x2.

As well as laptop and tablet modes, you can also use the x2 in what HP calls the ‘stand’ and ‘tent’ positions. The former has the screen facing away from the keyboard, and is a handy option when you want to present something to a group of people. Tent, on the other hand, refers to the x2 being placed in an upturned V shape – great when you don’t have a lot of desk space. 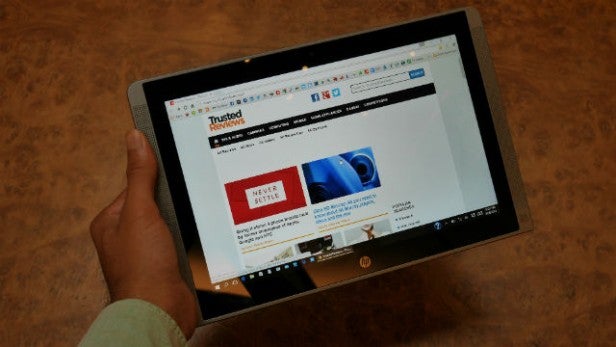 Where HP has most obviously cut corners is with the display. The Pavilion x2 uses a 10.1-inch, 1,280 x 800 touch-sensitive panel that’s disappointing, but unsurprisingly so. Its 149 pixel per inch (ppi) density does compare favourably with the Switch 11 and HP Stream 11 (both 135ppi), but that’s not saying a lot. We’d have preferred to see something closer to the 254ppi of the Click Mini.

Clarity isn’t the only problem. Black levels aren’t perfect, with the darkest areas of pictures looking blue-grey, rather than inky. Colours also look slightly washed out. The brightest of reds and blues lack vibrancy and instead look faded, like photographs in old family albums.

You’ll also struggle to use the x2 outdoors on a sunny day, thanks to its weak top brightness setting and highly-reflective screen. 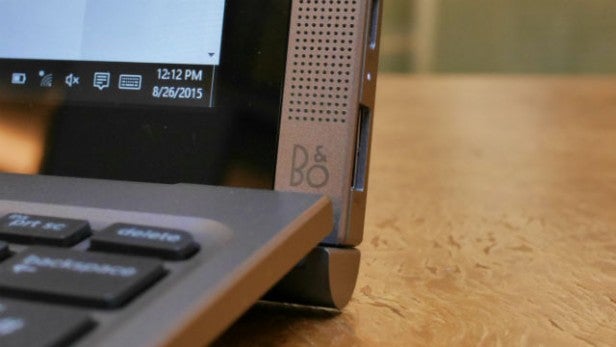 On the positive side, viewing angles are strong, with only a small drop in brightness from wide positions. Touch-responsiveness is also good, with finger swipes and taps always registering.

We must reiterate that the shortcomings described above are typical of cheap laptops. The important point is that the x2’s display is adequate enough for browsing the web and watching HD movies.

Sandwiching the screen is a pair of Bang & Olufsen-tuned stereo speakers. They’re pleasantly loud and, since they’re front-facing, sound clear even when you place the x2 on a soft, padded surface, like a bed.

One criticism we can make is that the speakers are easy to cover up with your thumbs when you hold the x2 in landscape mode. 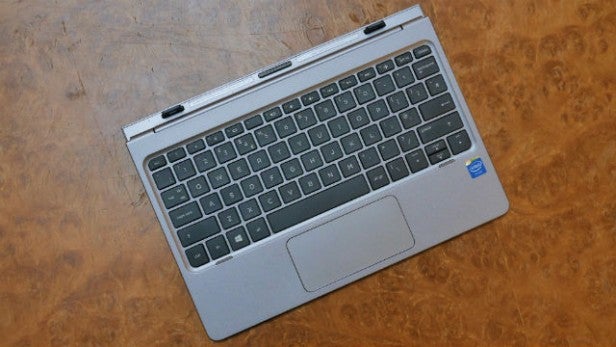 The black, island-style keyboard used by the x2 is a solid affair. While the buttons are well-sized and nicely spread out, they’re a touch too shallow to allow for a fast and comfortable typing experience.

The enter button is on the small side too, though this doesn’t take long to get used to. We’re also pleased to see that HP has included a row of quick settings and media keys above the numbers, saving you from using the trackpad when you simply want to adjust the screen’s brightness or pause a video.

That’s a particularly good thing, as the trackpad isn’t great. While it’s wide, it’s also short, meaning your fingers frequently stray out of the box. It’s frustrating, like watching a child try and fail to colour within the lines.

What’s more, the two-finger scrolling gesture often doesn’t register, forcing you to use the touchscreen to move up and down pages instead. The left- and right-click functions work well though, offering a reassuring level of resistance as well as a pleasantly snappy click.