What is the Acer Aspire Switch 11?

The Aspire Switch 11 is an 11-inch Windows hybrid, a category that blurs the lines between laptops and tablets. The tablet part holds the screen and the lion’s share of components – it attaches to the keyboard base via a hinge, in this case magnetically. The Aspire 11, unlike many of its rivals, has taken the hinge design further, meaning it can be positioned in four distinct modes.

From £330, it’s an affordable machine perfect for budget-conscious students, or consumers in the market for something versatile that can be used for casual web browsing and multimedia consumption. It’s not the most elegant, however, so isn’t the best choice if you’re fussy about design. 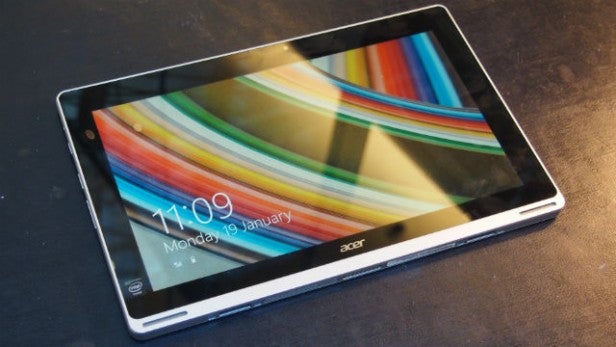 The Acer Aspire Switch 11 isn’t beautiful as a laptop or as a tablet. It lies somewhere on the spectrum between ordinary-looking and ugly, but closer to the former. The design is unimaginative at best. At rest, it’s a chunky little grey box with thick edges and inelegant curves. The brushed silver finish on the rear side of the tablet element provides some relief from the dull dominance of plain grey plastic, but it hardly gets the pulse racing.

When opened up as a laptop, it looks slightly better, almost like the MacBook Air’s squat, much less good-looking cousin. The entire unit weighs 1.46kg, but it feels heavier than that when you lift it from the front of the base, as the heavier tablet segment makes it feel unbalanced.

This top-heavy build is most blatantly exposed when you push the screen back as far as the hinge allows – the entire machine loses balance and tips over backwards. This is an issue that affects a lot of hybrid devices, even those that have the added weight of a secondary battery within the keyboard dock, but it’s still worth mentioning. 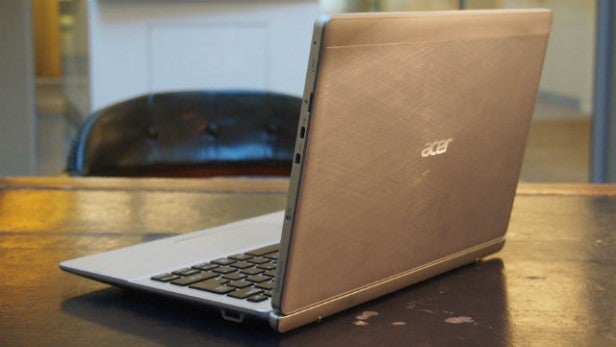 While the Switch 11 is fairly well proportioned for a large, budget tablet and comfortable in the hand, it’s not light enough to be held for an extended period of time, which is where the clever, Lenovo Yoga-esque hinge comes into play. Dubbed ‘Acer Snap Hinge’, it allows you to use the Switch in four separate modes, which Acer identifies as: Notebook (traditional laptop), Pad (keyboard folded flat behind for tablet use), Display (with the screen facing away from the keyboard) and Tent (an upturned V shape).

The first two need no explanation. Display mode is great for when you want to use the Aspire 11 as a tablet but don’t want to hold it, with the keyboard protruding behind as a sturdy stand, while Tent mode is decent for the same reasons but especially when you don’t have much space to place the device on, like on a messy kitchen worktop. It’s easy to switch between the different modes, and the magnetic hinge produces a satisfyingly loud, Surface-esque click when you reattach the tablet to the keyboard.

That’s a reassuring sign and the unit as a whole looks chunky, but sadly it doesn’t feel reassuringly hardy as a result. You can actually flex the front part of the plastic base if you put some elbow grease into it, and the unit we tested wasn’t entirely uniform from the outset. The front right-hand corner – on which you’d rest your right wrist – tailed up slightly, meaning that the base unit wasn’t flat, and it rocked as soon as any pressure was applied to that particular area.

The selection of ports on offer isn’t especially generous, or indeed wide-ranging. The tablet features a microSD slot, a Micro USB 2.0 port, a Micro HDMI output and the mains connection on the right side, while the left side holds the power, Windows and volume buttons, alongside the headphone jack. Between the hinge sockets on the bottom edge sits a docking port. The base unit, meanwhile, packs a USB 2.0 port and nothing else, which is disappointing. An SD card slot would be useful. 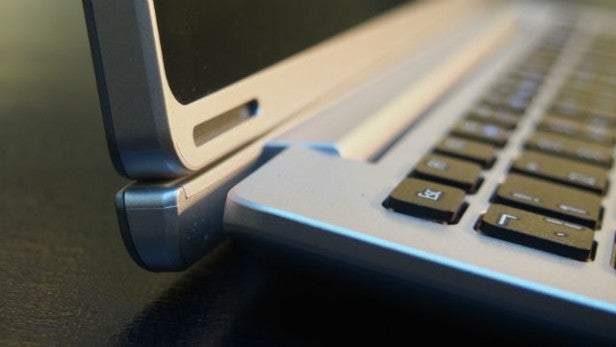 The Acer Aspire Switch 11 packs an 11.6-inch 1366 x 768 IPS display, protected by Gorilla Glass 3, which is typical for a hybrid at this end of the market. It may not be the sharpest screen you’ll find, but it’s nice and responsive and, considering the price, it’s a good display.

Image quality is generally solid. Contrast is decent, with black levels in particular quite good, but it struggles to show the subtle differences in colour in the brightest areas of pictures. Viewing angles aren’t terrific, but three people will comfortably be able to watch a movie around it without image quality dropping off. Colours aren’t aren’t entirely accurate, but they are vivid which makes this a nice screen for watching films and TV on.

So far, so good, but this screen’s main weakness is brightness. We feel like there should be at least a couple of notches higher than the brightest available setting, and you’d struggle to use the Aspire Switch 11 outdoors. Acer claims that its ‘Zero Air Gap’ display technology eliminates reflections, but we’re not buying that. Smooth, glossy glass is reflective. It will work fine indoors, but anywhere with bright light will prove a challenge.

A pair of front-facing speakers sits just beneath the screen, but they’re not particularly impressive either. The sound they produce lacks power and is easily washed out by background noise – in our case, a washing machine in the next room.

Used as our main laptop for the review period
Tested for at least a week
Used consistent benchmarks for fair comparisons with other laptops
Reviewed using respected industry benchmarks and real world use
Next
Performance, Battery Life and Verdict Review