Toshiba’s new Satellite is one of the smallest hybrid laptops we’ve ever seen – and one of the cheapest, too, at just £250. This makes it a tempting option if you’re looking for a cheap device for work or school.

The Click Mini’s keen price and 8.9in screen don’t just draw comparisons with the tablets it’s designed to replace. It’s reminiscent of an old-school netbook, too, and we hope that this device can prove more successful than those tiny, cheap laptops from a few years back.

The Mini lives up to its name: its 8.9in screen means it’s one of the smallest hybrids around, and so has more chance than most to compete with tablets. 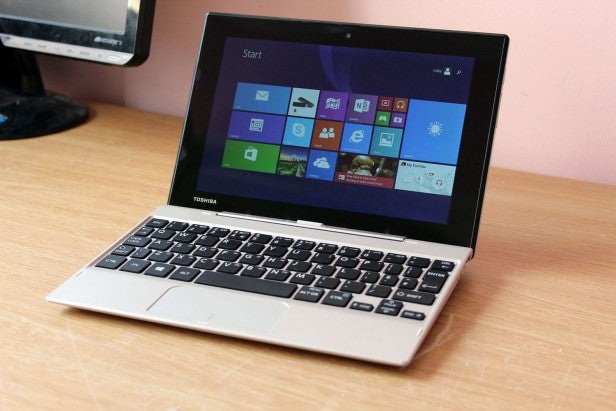 Also in its favour is that it works well as a proper tablet. In portrait mode, the power button and volume rocker are on one side while a Windows button sits on the other. And apart from being a little soft, they all work well enough. Connections are good too, with microSD, micro-HDMI and micro-USB ports sat next to the Windows key.

Build quality is consistent and impressive. The back panel barely budges, and the seams around the screen are similarly solid. We’d confidently toss the Toshiba’s tablet portion in a bag without any protection.

The tablet plugs into the base and clips into place – unlike Asus’ latest range of Transformers, which rely on magnets alone. It’s released by pressing a single button. The clasping hinge feels solid, although perhaps a little too tough – this device is tiny, but it requires a solid push to move the screen and to release the tablet.

Nonetheless, it’s a good start. Dimensions are decent when compared with hybrid rivals – it’s just under 20mm thick – and the whole unit weighs less than a kilo. Competitors such as the Acer Aspire Switch 11 come in closer to 1.5kg. The Click Mini’s closest challenger is the Asus Transformer Pad TF103, which is 0.1mm thinner but more than 100g heavier – and it only runs Android.

The Toshiba is lighter and slimmer than most rivals when clasped together, and it isn’t far short of tablets when split in half. The Satellite’s tablet portion weighs 472g and is 9.8mm thick – less than 150g heavier and under 2mm thicker than the latest iPad Mini.

These impressive figures result in a hybrid that can travel with you anywhere. 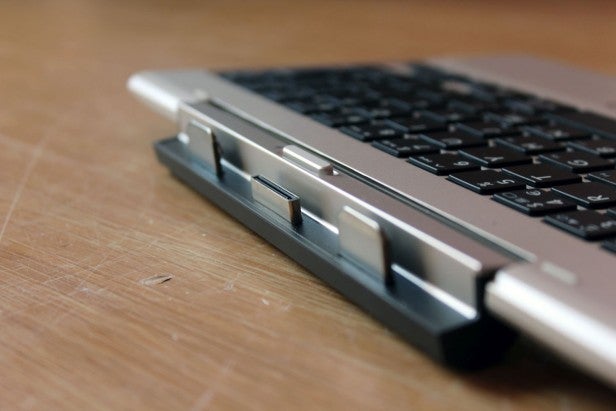 The Satellite’s budget price does mean it lacks flashy features, however. It’s made entirely from plastic, and the glossy area around the screen is distractingly on the large side. The laptop base isn’t as sturdy as the tablet section, either: its corners flex; tapping the plastic results in a fair bit of rattling; and pressing the underside causes the keyboard to bounce upwards.

Inside, wireless connectivity is limited to a single-band 802.11n card, and there’s no NFC connectivity or an IR blaster. There’s no way to get mobile internet working on the Click Mini either, short of a USB dongle, and there are no sensors besides the standard GPUs, accelerometer and gyroscope.