What is the HP Chromebook 14?

The HP Chromebook 14 is a 14-inch laptop that runs on Google’s browser-based Chrome operating system. This is HP’s second stab at making one and having extensively used the HP Pavilion Chromebook for the past year, there’s definitely plenty of room for improvement.

It’s far more pleasing on the eye and with a Haswell-based Intel processor runs faster than first generation Chromebooks with all the added battery boosting benefits. HP also includes its new Data Pass pay as you go mobile broadband service, which gives users free 3G access for two years. Is it enough to make this the one Chromebook to own? Maybe, but we’re not totally convinced. 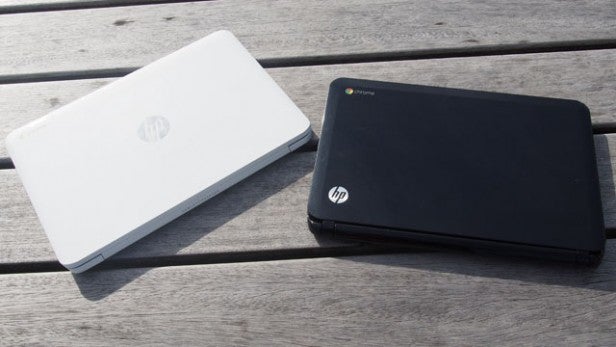 It’s a fair assessment to say that HP’s first Chromebook was not the prettiest. Black, cheap and largely uninspiring. So for the Chromebook 14, HP has dropped the serious look in favour of something more brash and loud. You can get the Chromebook 14 in Peach Coral, Ocean Turquoise or Snow White like the one we had the pleasure of playing with.

It’s different but in a good way and a much-needed departure from the original. The soft matte white lid and dimpled base is not something we’ve seen on other Chromebooks. It’s nice to grip and gives the sub-£300 laptop a far more luxurious feel than its plastic build suggests.

When you open it up, the chassis is clearly MacBook inspired from the button-less chrome trackpad to the square chiclet keys, albeit it doesn’t use the same expensive materials as found on Apple’s laptops. There’s more space around the keyboard and a larger palm rest, but it definitely looks nicer from the outside than it does from the inside.

ROUND-UP: 10 Best Laptops You Can Buy 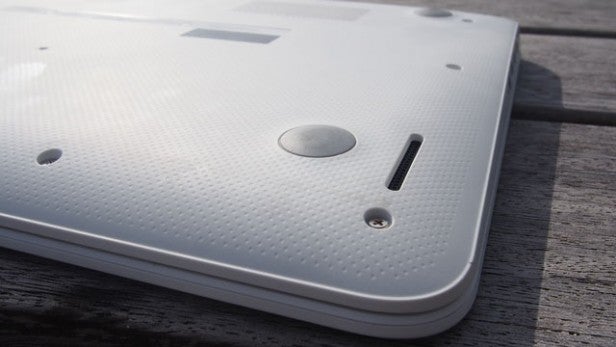 It’s 1mm thinner than the Pavilion (21mm) and also marginally heavier than the HP’s first Chromebook (1.8kg) weighing in at 1.85kg. That doesn’t sound like a lot but the extra heft is definitely more noticeable carrying it in a bag. We swapped between the two and the added weight is noticeable. For portability, there’s definitely better Chromebook options.

One thing you can’t knock this Chromebook for is onboard connectivity. Over on the right edge is the proprietary charging port so sadly it doesn’t support USB charging like the HP Chromebook 11. It’s joined by a SD card slot, a USB 2.0 port and further down is a 3G MicroSIM slot that comes with the more expensive model. Over on the left edge you’ll find headphone/mic jack, two USB 3.0 ports and a full-sized HDMI port that’s something of a tight fit when plugging in a HDMI cable.

Elsewhere, there’s two thin stereo speakers on the base and above the screen you’ll find a pretty average 720p HD webcam with a flash to help out for those night-time chats.

All the changes HP has made are good ones. It feels solidly built and has been knocking around our bag for the past week with little issue apart from the odd pen smudge on that soft matte lid. The extra weight could be a slight issue for some but overall we are much happier with how the second generation HP Chromebook looks. 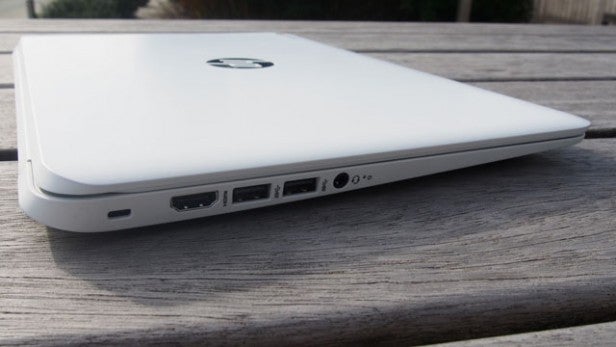 The Chromebook 14 features a 14-inch LED backlit 1,366 x 768 HD display which matches the screen resolution on the 11-inch Acer Chromebook C720 and the 13-inch Toshiba Chromebook. Sadly, that means we have another Chromebook that serves up yet another below par display. It’s a little more acceptable on a 11-inch display but on a 14-inch screen it’s really not great.

It’s also a TN display, which is renowned for poor viewing angles and glare both of which the Chromebook 14 suffers from. You’ll find yourself tilting the angle of the screen at times to reduce reflection.

The display looks a little washed out and lacks the vibrancy and punchy colours to make this a particularly great place to watch video. Putting it side-by-side with the HP Pavilion, there’s some noticeable improvements for colour accuracy and sharpness. The 200 nits of brightness doesn’t do a great deal of good when you hovering around the 50% mark and you’ll need have near to maximum brightness to have the most suitable working environment.

Chromebook displays on the whole continue to be the most disappointing aspect especially when tablet screens are getting so much better.

We didn’t really have
high expectations for the Chromebook 14’s speakers but surprisingly, like the
Toshiba Chromebook, the HP doesn’t do a bad job. There’s no Beats Audio as some other of the brand’s laptops. but
there’s just the subtle hint of bass to help give the loud and
reasonably well-defined sound a little bump. The forward-facing speakers
ensure you feel the full brunt of your audio as well. If you are
planning to put that 60-day free trial to Google Play Music to good use,
you’ll be pleasantly surprised by what the speakers have to offer.

Used as our main laptop for the review period
Tested for at least a week
Used consistent benchmarks for fair comparisons with other laptops
Reviewed using respected industry benchmarks and real world use
Next
HP Chromebook 14: Battery Life and Performance Review