The HP Chromebook 14 falls in line with the other second generation Chromebooks using an Haswell based Intel Celeron 2955U CPU clocked at 1.4GHz to give the streamlined operating system the power to keep things running smoothly. There’s 2GB of RAM to cover multitasking and 16GB of SSD storage for files backed up by 100GB of free Google Drive cloud storage over two years.

We can’t fault the boot-up times, something that Chromebooks excel at and it regularly checked in around 7-8 seconds. It’s a largely slick experience when you jump into the desktop and it manages well under the pressure of multitasking or more appropriately, multitabbing.

Running two Google Chrome browser windows with four tabs open on each, it shows few ill effects of trying to stream Netflix, playing games, emailing, browsing and working on a Google doc all at the same time. 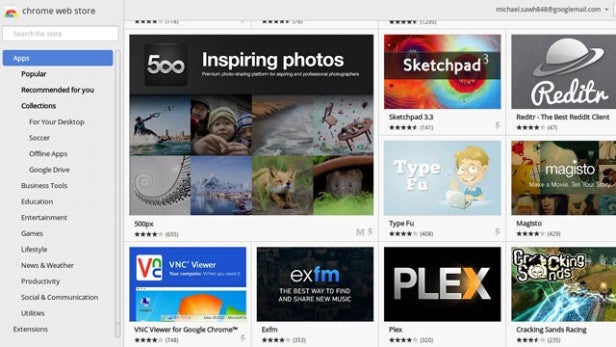 If we are being really picky, the faint humming of the fan can be heard when things get more demanding. It’s not something we’ve generally spotted with Chromebooks before. It’s not violently loud but enough that some will notice it.

Any issues with performance are balanced out with Google’s relatively clutter-free Chrome operating system. The browser-based OS is plain and simple to use with no desktop applications or shortcuts littering the screen. All applications are tucked away in the app launcher at the bottom left corner of the screen as usual. Staple Google apps like GMail and Google Docs are all present and HP bloatware is non-existent. 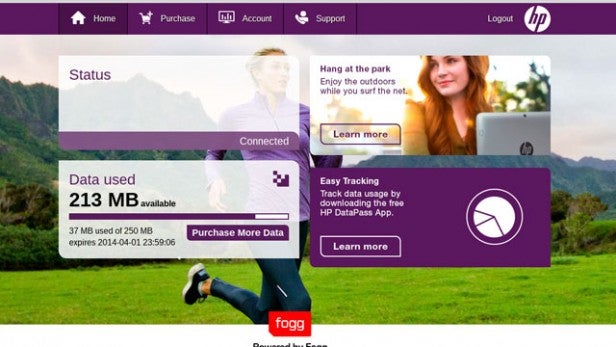 250MB doesn’t sound like a lot and it’s not going to let you enjoy a Netflix binge session, but if you need to send an email or work on a document it’s actually very useful. When a Wi-Fi connection is not available it will begin to search for the 3G connection and takes less than a minute usually to connect. Getting the added 3G means you will have to buy the more expensive Chromebook 14 model, but when you consider that it’s still under £400 that’s still good value.

The previous HP Chromebook
managed a mediocre 4.25 hours, so with the new Chromebook promising up to
9.5 hours thanks in part to its Haswell architecture we were hoping for
much more. Applying the same test we’ve used with recent Chromebooks
running Netflix continuously on loop with 50% brightness the Chromebook
14 manages an impressive nine hours.

Not as impressive as the 9.5
hours it claims but more than enough for a day. 50% brightness as we
mentioned is not the best conditions for watching video so we tried it
with full brightness and it managed closer to 6 hours. This is where the
bigger screen and the need to crank up the brightness clearly plays its
part in diminishing its stamina levels.

The good news is that
after a half an hour charge from 1% battery life it was back up to 40%.
In just under two hours it was back to full capacity so you won’t be
waiting long to get back to work or play.

Used as our main laptop for the review period
Tested for at least a week
Used consistent benchmarks for fair comparisons with other laptops
Reviewed using respected industry benchmarks and real world use
Previous
HP Chromebook 14 Review Next
Keyboard, Trackpad and Verdict Review