A nicely-built indoor security camera that has been improved with the addition of clip downloads.

The last time Hive released a camera, the Hive Camera, the product was a rather bog-standard model that simply recorded to SD card. Now, the company is back with the Hive View, a far more sophisticated option that has an integrated battery so you can undock it and move it where you want. It’s a neat option and, combined with a slicker interface and a greater number of recording features, makes the Hive View a far more interesting product than its predecessor.

Hive has certainly pulled out the design stops for the View; it’s one of the best-looking indoor security cameras I’ve seen. The main body is a 56mm cube, available in white & champagne gold or black & brushed copper. It feels well made, and its small size means the camera is unobtrusive.

For everyday use, the unit magnetically attaches to the flexible stand. This can be sat on a flat object, attached magnetically to a metal surface, or wall-mounted. The camera swivels on its magnetic attachment, and the stand rotates and moves up and down. In short, you can easily line up the Hive View to capture the area you want. 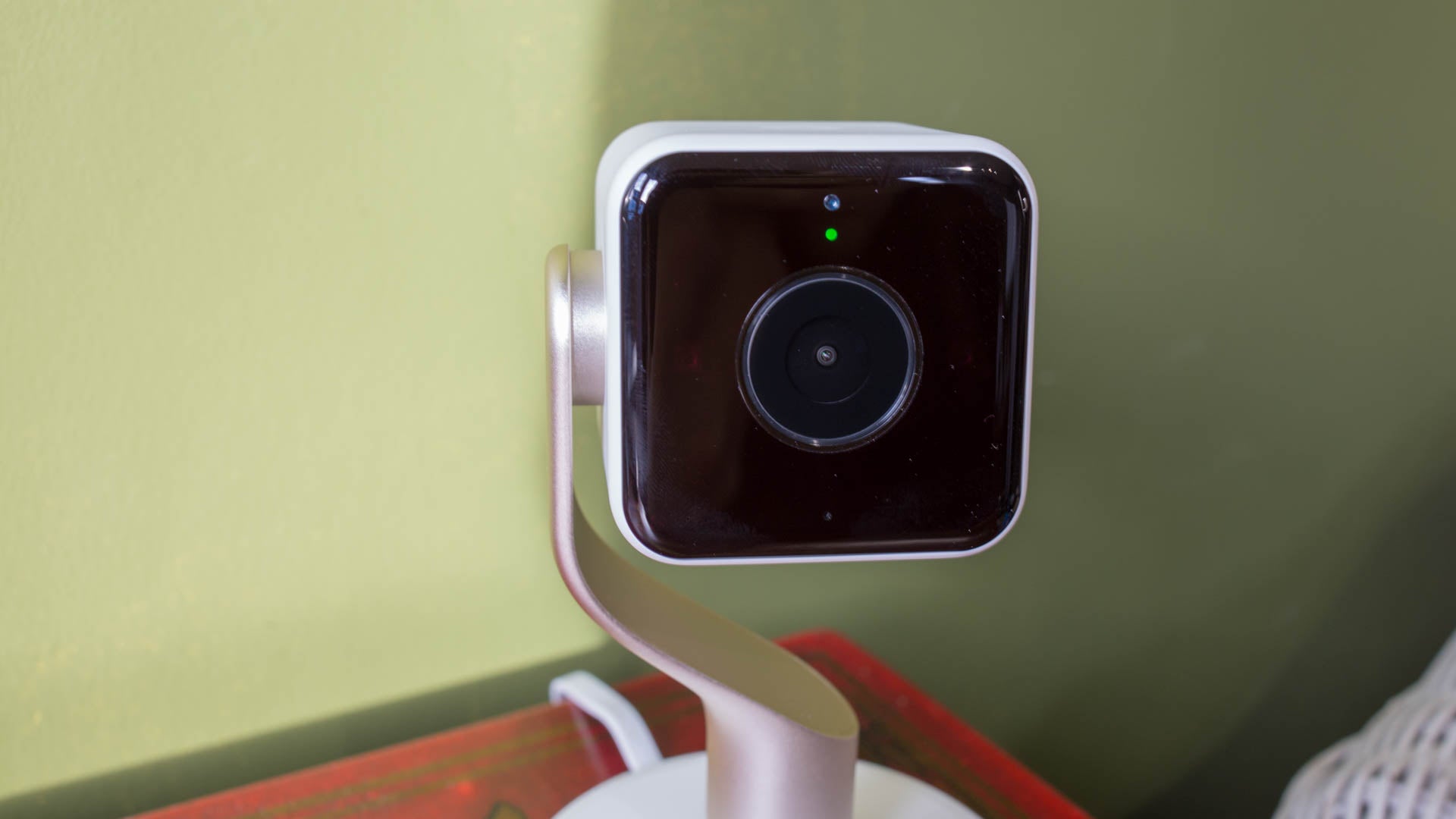 The stand has a micro-USB connector to provide power to the camera and charge its internal battery. Plus, the camera has a secondary micro-USB port that enables you to power it independently if you’d rather place it away from the stand. 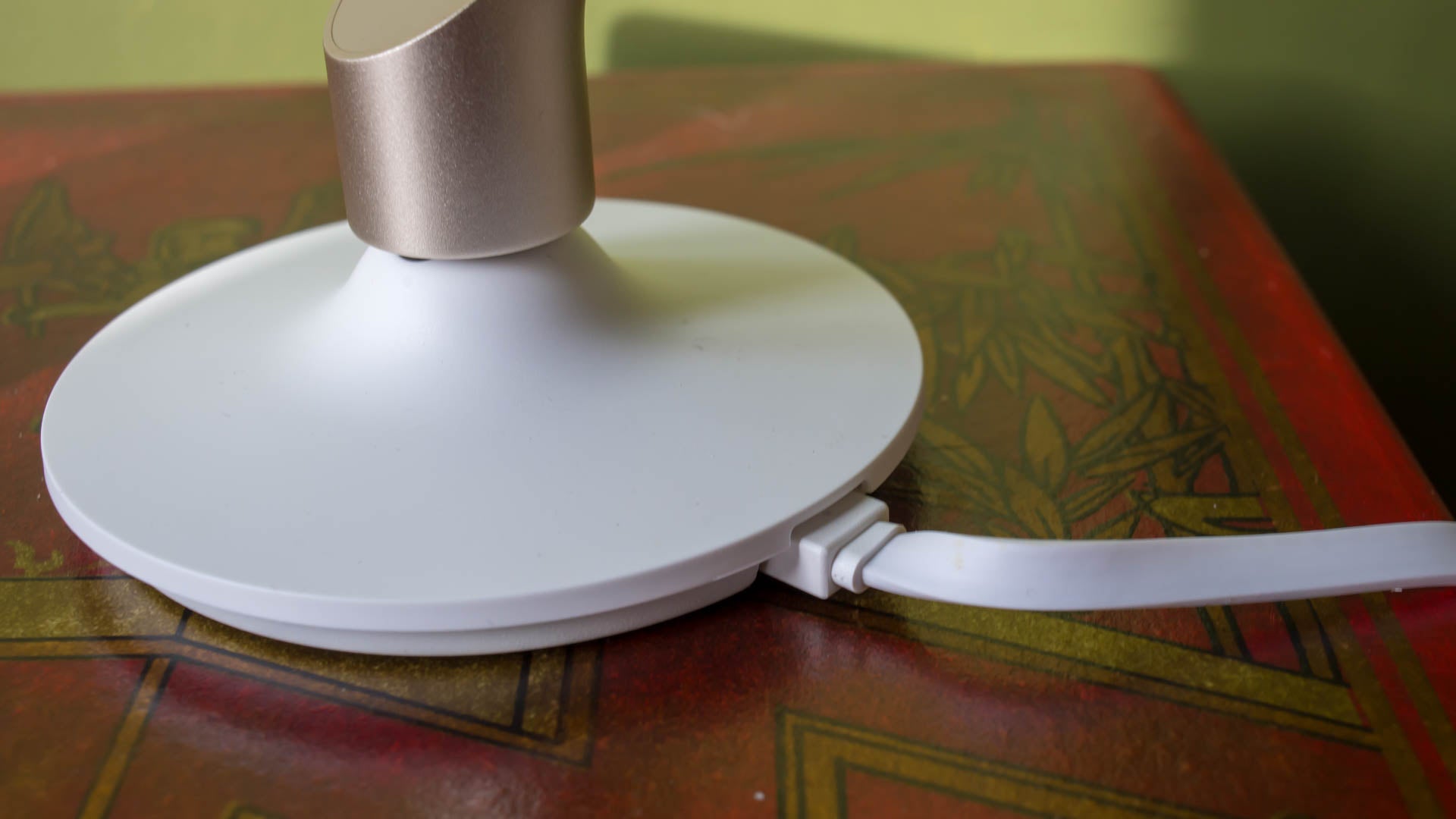 The View is controlled via the central Hive app, which is also used to control other devices, from the Active Heating thermostat to the Active Lights. That’s an improvement over the Hive Camera, which had its own distinct app.

Getting the Hive View set up is easy using the app. Simply follow the onscreen instructions to connect your phone to the camera, and then get the device to connect to your home network (2.4GHz and 5GHz bands are both supported).

At the heart of the camera sits a 1080p sensor, with the footage funnelled through a 130-degree wide-angle lens. I found that I could easily fit in an entire room without too much effort.

Any time that you want to drop in, you can select the Live View option, and stream audio and video from your camera. There’s currently no chat feature built into the app, so you can’t communicate with anyone that you see in the footage.

The camera records at 720p by default, but you can raise the resolution to the full 1080p using the Settings menu. 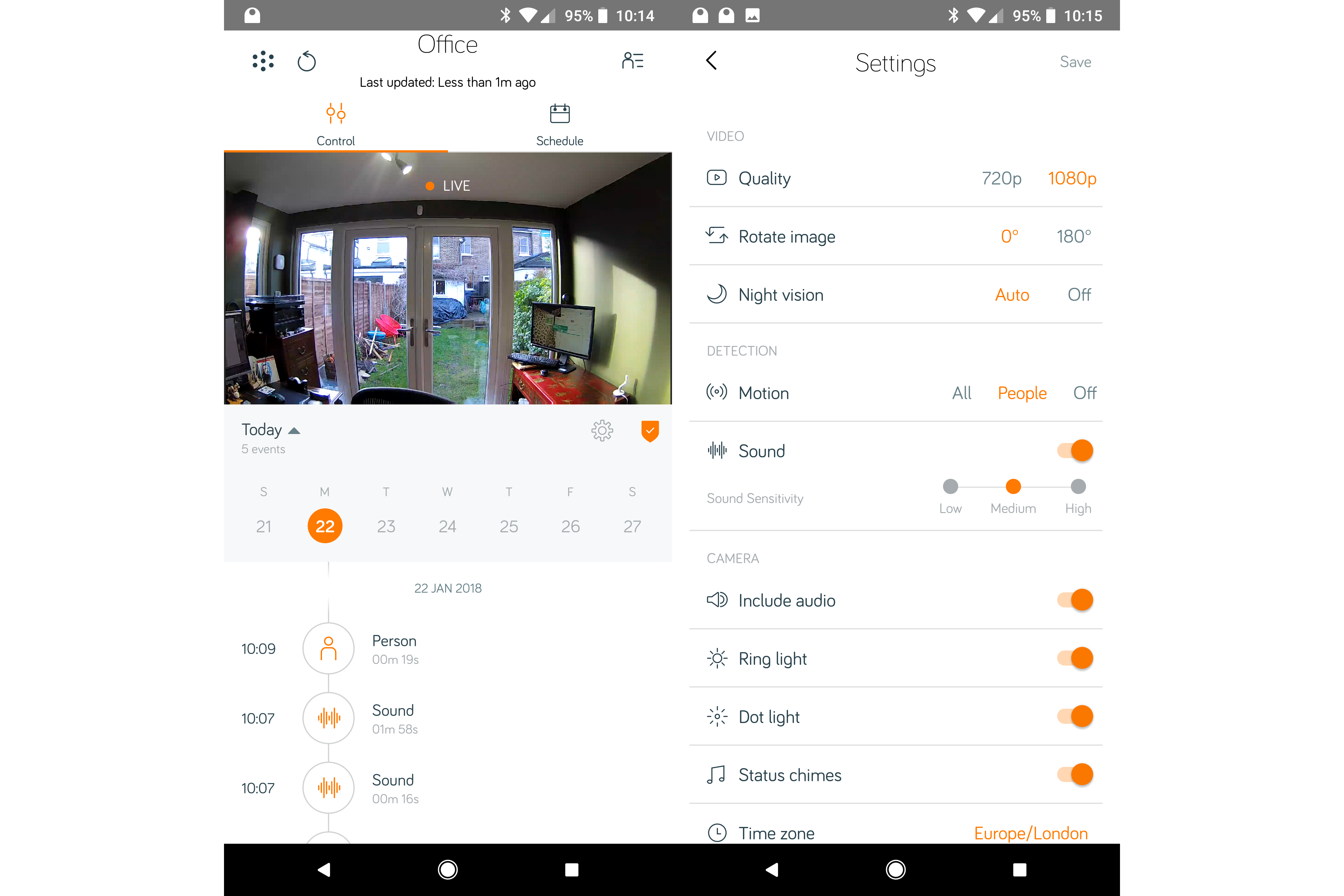 The big news here is that the Hive View comes with 24-hour cloud recording for free. This isn’t a huge amount of storage, but you can upgrade to 30-days of storage for £4.99 a month, for up to two cameras. That’s far cheaper than Nest Aware – although it’s fair to point out that there are some differences between the two.

The main one is that the Hive View uploads footage to the cloud only when an event has been triggered. Nest gives you continuous recording.

Being able to pull the camera off its stand and place it where you want is a cool feature, and a handy way to monitor a different part of your house. For example, if you want to do something outside, but keep an eye on the front door, you can temporarily move the camera; or, you can even use it as a basic baby monitor. The battery lasts about an hour, but you can charge the camera via its own micro-USB port to extend runtime. Neatly, you receive an email when the battery is running low – a handy prompt to either plug in a USB cable or return the camera to its usual dock.

Hive View has two methods for detecting activity: motion and sound. This camera can recognise people, and the default option is to only send an alert when a person has been spotted. You can change the option to ‘All’ if you’d rather be notified of any motion.

It’s a shame that currently there’s no option to draw activity zones, filtering so that you’re only warned about motion in certain areas of the picture. Still, with alerts set to people-only, there were very few false positives with the camera in my office.

Sound alerts let the camera listen for loud noises and send out a warning. This can be useful, since the camera could pick up someone breaking glass, for example. The camera picked up me shifting things around in the shed attached to the office. If you find that you receive too many alerts, you can adjust the sensitivity of the sound detection ( (Low, Medium and High)) to reduce them, or turn them off completely. 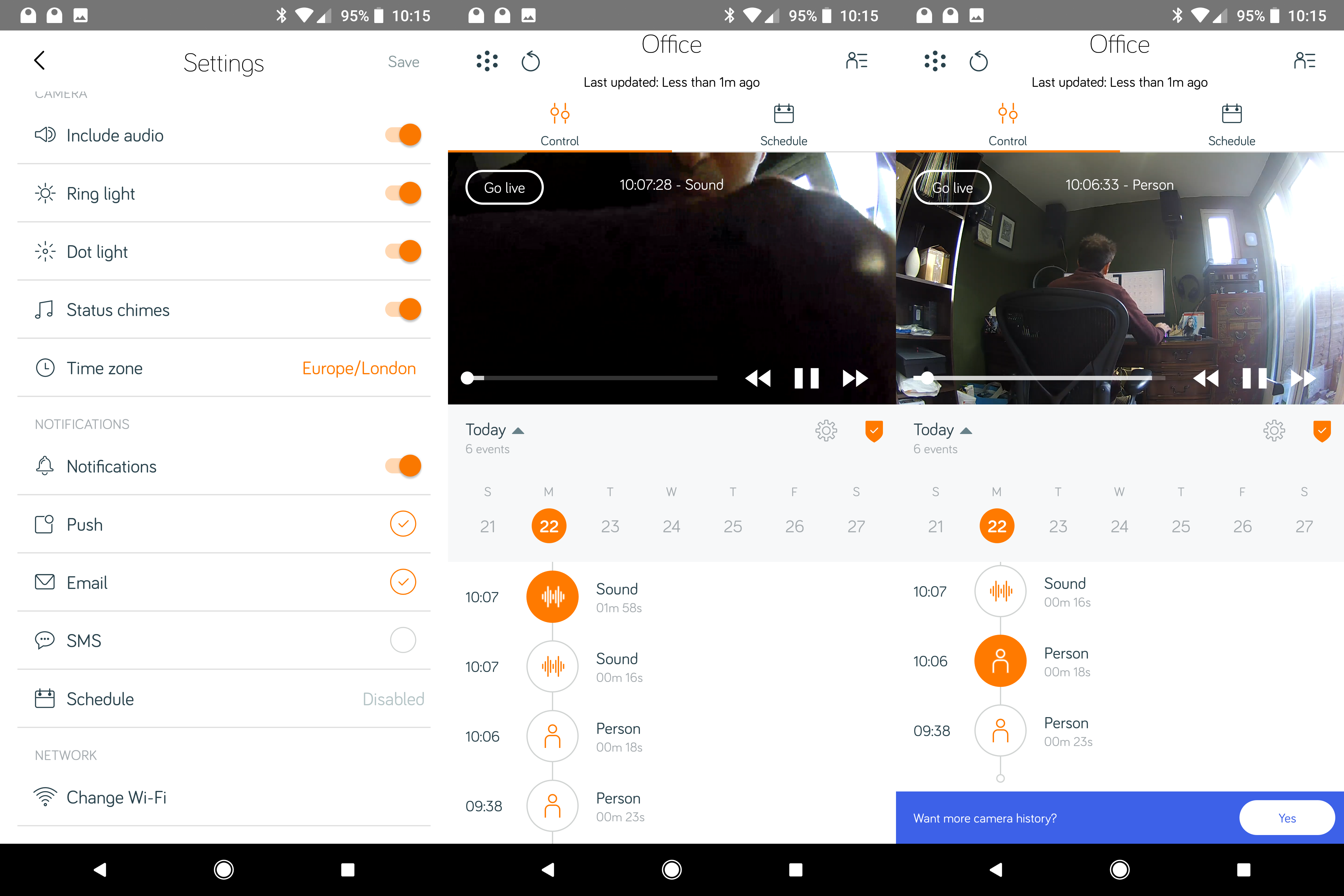 Notifications are pushed to your smartphone, but you can also choose to send them via email or SMS. To do this you need to sign up for Hive Live, which costs £2.99 a month and gets you a few other options, including discounts on future purchases and an ongoing warranty. Alternatively, signing up for the Hive View Playback Membership gets you the Hive Live benefits plus 30-day cloud storage for £4.99 a month.

Alerts on your phone merely give you a text version of what’s happened, such as ‘Sound detected’. It’s a shame there’s no thumbnail preview of the event, of the type you get with Nest cameras.

Tap an alert and you’re taken to the app where you get a list of events. Again, it’s a shame that none have thumbnail previews to make finding the right clip easier. Instead, you have to tap each event to view its content.

When launched, the camera wouldn’t let you download footage to your camera, but a recent update has fixed that. That means that you can save evidence for when you need to present it to the police.

There’s no geolocation built into the camera. If you’d rather not record yourself when you’re at home, the camera has a schedule mode, where you can choose when it’s active or not.

Image quality is very good from the camera; it picks up detail in the image, leaving faces easily recognisable. I found the colour balance to be good, too, with a pleasing image captured during daylight.

At night, the camera’s IR turns on, easily lighting up the room in which I was testing. IR footage looks good, capturing enough detail in people’s faces.

IFTTT support lets you turn the camera on or off using the channel. That might seem a bit limited, but it’s actually really useful. For example, using a Flic Button, you can turn the camera on when you go out and off when you return, so you’re only ever recording when you’re out. I’d like to see more companies have a similar feature.

Hive has not yet enabled any Recipes for the camera, turning on your connected smart lights automatically in much the same way that Works With Nest can control Philips Hue bulbs.

There’s currently no Alexa integration, either, which is a shame. I’d like to see an Echo Show skill, letting me view the camera’s feed through the smart display. Likewise, there’s currently no Google Home or Apple HomeKit support.

Hive has done a far better job with the Hive View than with the Hive Camera. I love the ease with which you can pull the camera off of its stand and move it around your home. People detection is a great addition, too, dramatically reducing the number of false positives. 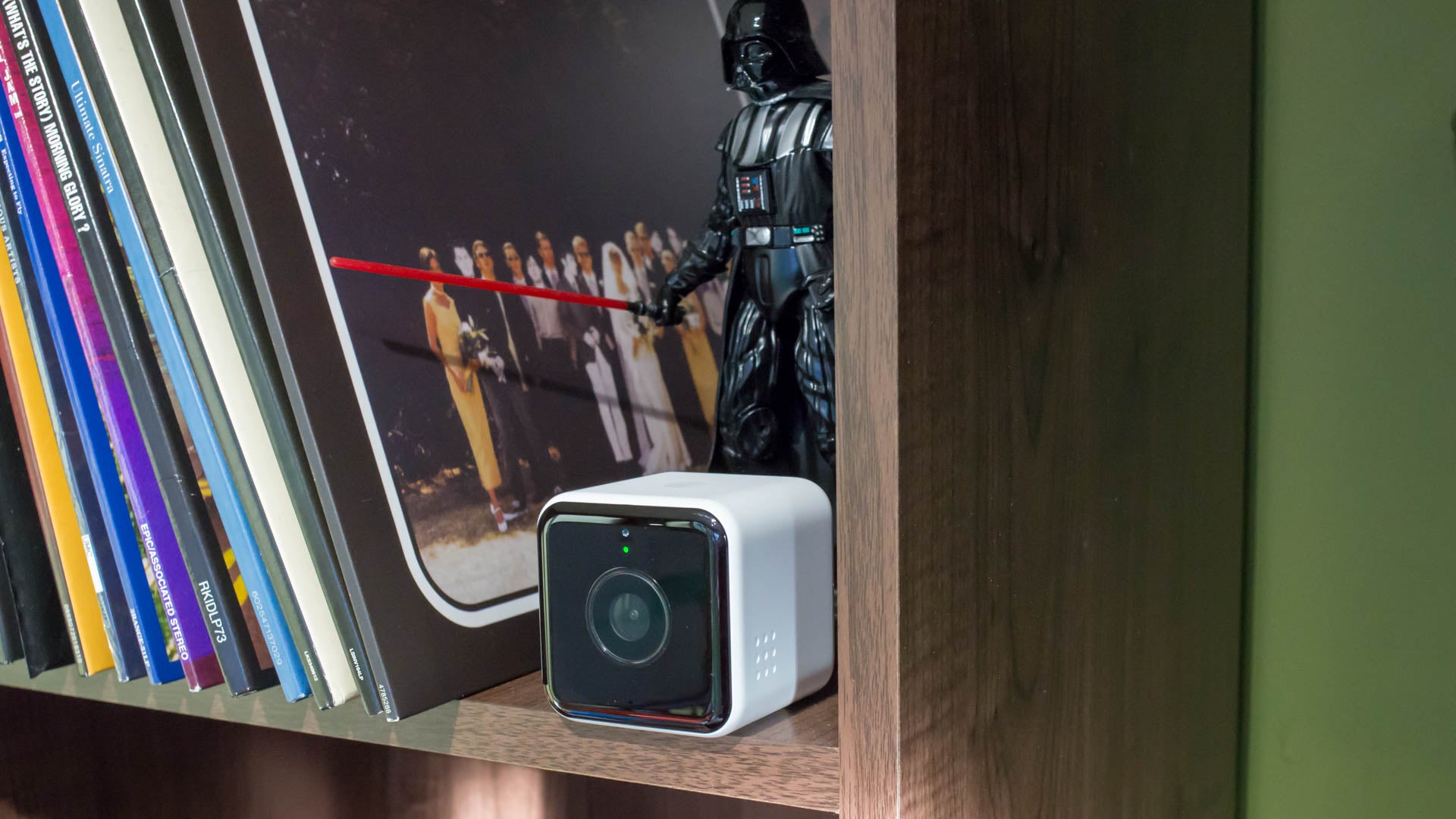 With the ability to download clips, the Hive View is a product that I more easily recommend. However, I would like to see the ability to select motion zones to monitor, helping reduce false positives. If you have a Hive account already then camera integration will be a nice addition. However, the competition is currently better. The Nest Cam IQ is smarter and offers better, although more expensive, cloud storage. The Netatmo Welcome features facial recognition, letting you do more when it spots someone it knows coming home.