What is the Hive Active Light?

Although Hive may have started life as a smart thermostat, the system has evolved, adding new features and sensors. First came the motion and door sensors, but now British Gas has added Active Light smart light bulbs, so that you can control your lighting from your smartphone.

Most recently, the company has added support for Philips Hue bulbs. You still need the Hue Bridge, but you can control all of your lights from the Hive app. And Hive has expanded its range with new GU10 bulbs, too.

As with the majority of smart lighting systems, the intelligence in the Hive Active Light is integrated into the light bulb itself. This makes the bulbs a fraction heavier than a traditional ‘dumb’ LED light bulb, but not to the point where you need any special fittings. Externally, the Active Light looks just like any other LED bulb. Currently, you have a choice of three fittings: bayonet, screw and GU10. 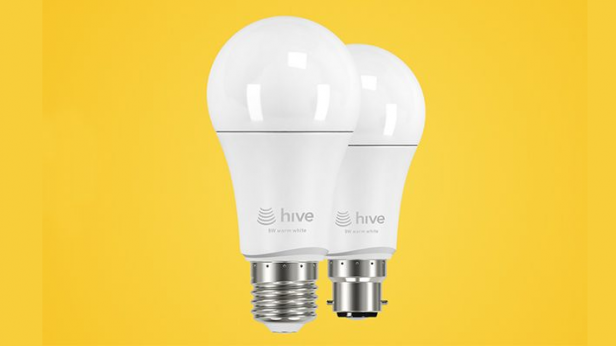 As the bulbs use a standard fitting, installation is a simple matter of switching out your old bulbs for the new. The only thing you have to watch out for is existing dimmers, as the Active Light isn’t compatible with them – the same’s true for other smart lights.

There are three colour options for the bayonet and screw Active Light. Cheapest is the £19 Active Light Dimmable. This 9W bulb has a light output of 806 lumens, and colour temperature of 2700K (warm white). This is a similar bulb to the £15 Philips Hue White bulb.

Next is the £29 Cool to Warm White, which has the same brightness and power rating as the Dimmable bulb. The big difference is that you can adjust colour temperature between 2700K (warm white) and 6500K (daylight cold white). This is similar to the £24 Philips Hue White Ambiance light.

At the top of the range is the £44 Colour Changing bulb. Light output remains the same, but power usage increases slightly to 9.5W. You get the same colour temperature adjustment as with the Cool to Warm White bulb, plus you can pick any RGB colour you want. This competes with the £50 Philips Hue White and Colour Ambiance. 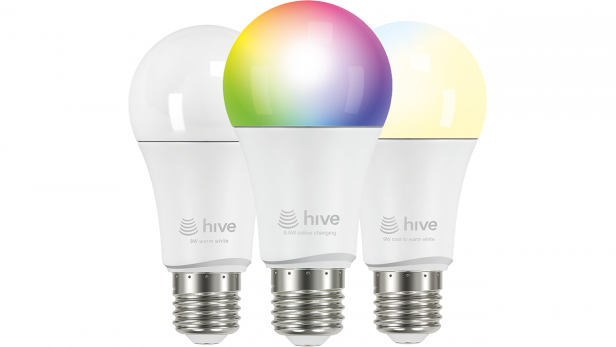 GU10 bulbs start with a dimmable option with a colour temperature of 2700K. This costs £15 a bulb, although six- and 10-pack options are available, making the Hive bulbs a chunk cheaper than the equivalent Hue option.

There’s no colour option at the moment, but there is a GU10 Cool to Warm White temperature controllable bulb (2700K to 6500K). These bulbs cost £19 each, although you can save more with six- or 10-pack options. Again, this is cheaper than the equivalent Hue bulb.

All GU10 bulbs have a light output of 350 lumens, which makes them roughly equivalent to a 35W Halogen bulb. 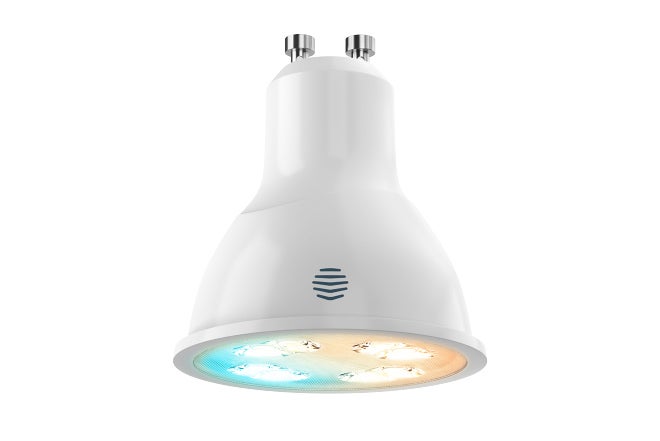 To use the bulbs, you first need the Hive Hub. If you’ve got the heating system or any other Hive components, you’ll have a Hub already, otherwise (excluding the deals) this costs £80. The hub is an unobtrusive product that hooks up to your network via its Ethernet port. 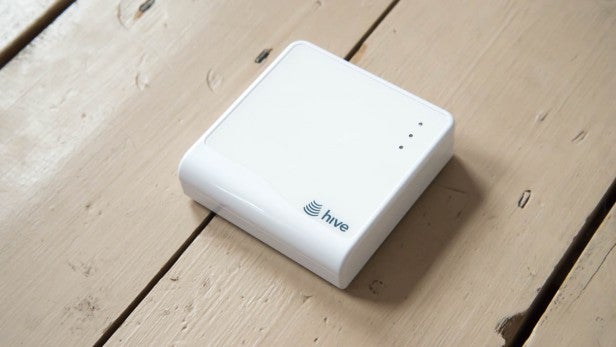 Once the hub’s set up, it’s simple to add the Active Bulbs via the mobile app (Android or iOS), which covers all other Hive products. You just turn the light switch on, and the bulbs enter pairing mode, ready to be discovered. I had my bulbs up and running in a matter of minutes. 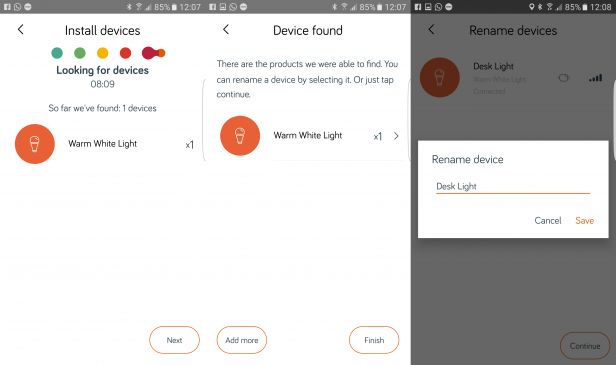 Once a bulb has been discovered, you control it via the Hive app. All lights have on/off controls, plus a dial that lets you control the dimming level in 10% increments, with a special Low mode of 5%. If you have a Cool to Warm White bulb you can also adjust colour temperature, while Colour Changing bulb owners can also pick the colour they want. 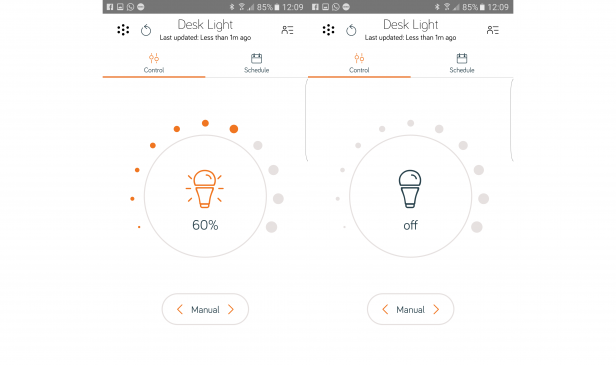 Originally, the app would pop up a ‘Saving…’ message at the bottom of the screen, which is a little distracting. Hive has fixed this with a more recent update, making it far neater to make adjustments. Changes happen quickly, and I found that the bulbs had a great dimming range, from very dark ambient light to room-filling brightness.

For automatic control, you can set a simple schedule, selecting when you want a light to turn on and its brightness, plus when to turn it off. For hallways or for fooling burglars when you’re away, scheduling is a neat option. 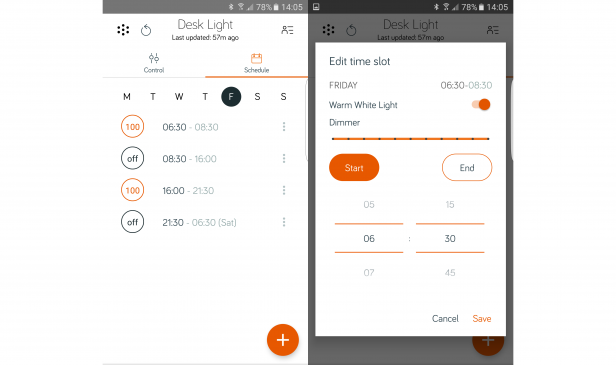 Currently, there are no dedicated light switches available, unlike with the Philips Hue. For most people, that will mean using a smartphone to control the lights, which isn’t particularly useful. Walking into a dark room, only to have to grope around for your phone, just isn’t very natural. Besides, this kind of system is useless the second you have guests – unless you want to kit them all out with the app (which you won’t).

There are other options, though. If you have any of the Hive sensors, you can set up Recipes in the app to trigger the lights. For example, you can use a motion sensor to turn on a light, which may be useful in a toilet.

If you have Samsung SmartThings, you can bypass the Hive app and hub entirely. Hive Active Light bulbs use ZigBee to communicate, so you can pair them directly with the SmartThings Hub. The only problem is that SmartThings can’t detect the type of device automatically, so you have to set the option in the SmartThings web API. I changed the type of device to a ZigBee Dimmer, but there are options for ZigBee White Colour Temperature and ZigBee RGBW bulbs, too, to cover all types of Active Lights. 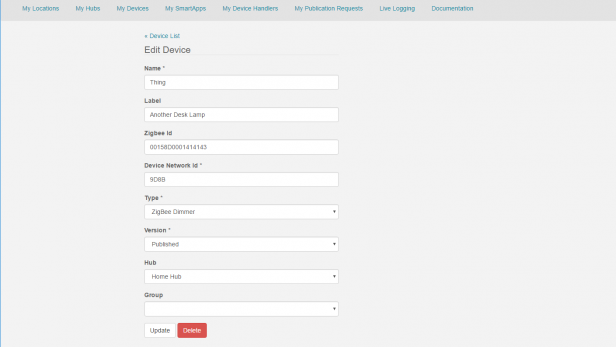 The SmartThings app is neat and carries the additional advantage that you can control your lights via any other compatible switches and sensors. If you’re looking for lights to pair with SmartThings, the Hive ones are great value. 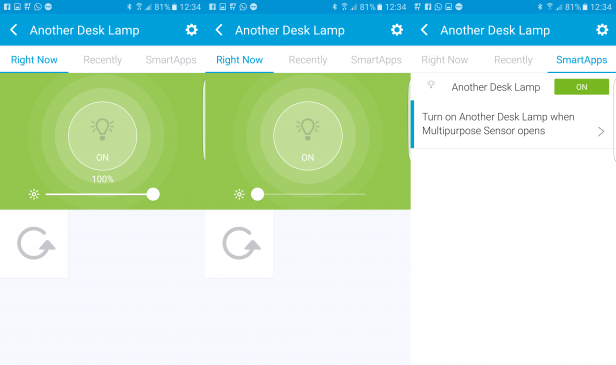 With the most recent Hive app update, Philips Hue bulbs. As with other Hue accessories, you have to pair Hive with your Hue Bridge following the simple instructions. After pairing, all of your Hue lights appear in the Hive app, where you can control them in the same way as your Hive lights. 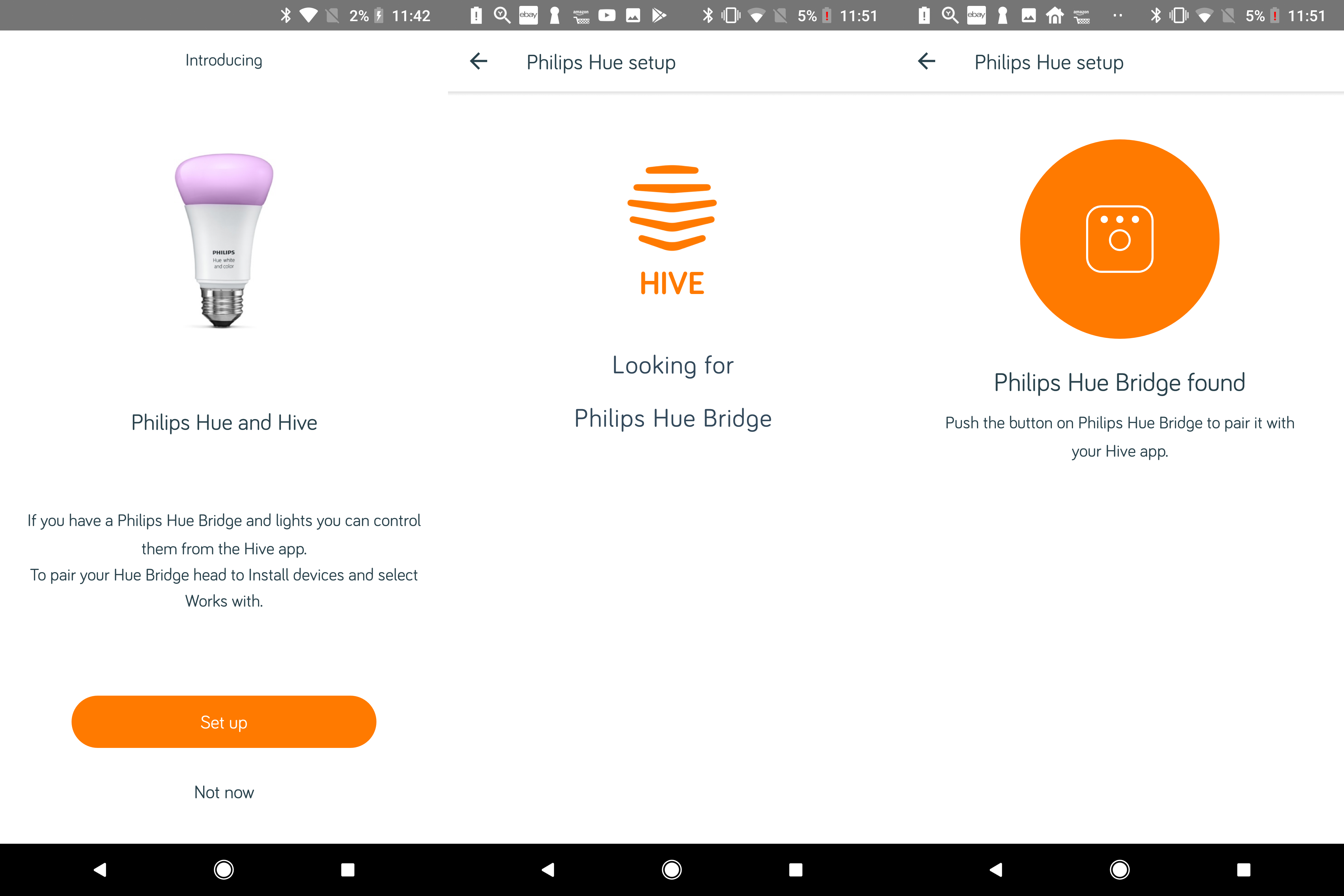 Any schedules or settings that you have in the Hue app remain the same, but you can also add timers and use Hive sensors to control all of your lights. If you’ve got a mixed load of lights and sensors this is quite neat, but the Hue app remains better, and Hive doesn’t support Hue accessories, such as the light switch.

Hive provides an IFTTT channel for the Active Lights. There are no triggers, and just two simple actions: turn on a light, and turn off a light. Still, it’s nice to have IFTTT, as it means that you can control the lights from other devices. For example, you could have your lights turn off when you go out, or turn a light on automatically if motion was detected by a connected alarm system. 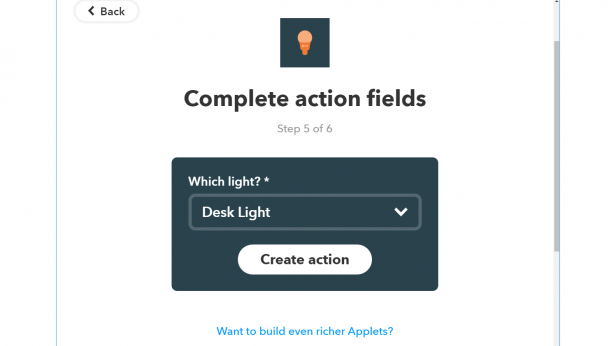 Amazon Alexa support is arguably more useful, as it gives you voice control over your lights and goes some way towards overcoming the lack of dedicated light switches. Via the Hive Alexa Skill, you can turn lights on, off or set your desired dimming level. It all works quickly and smoothly. 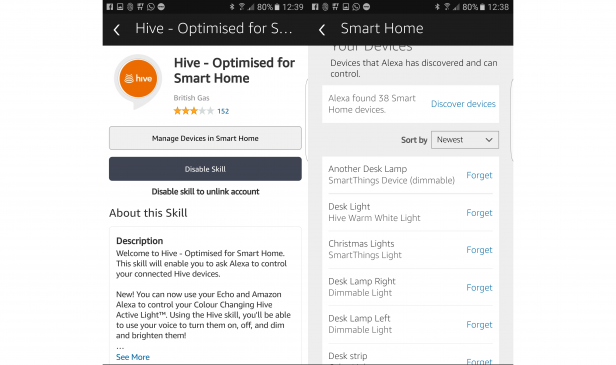 Google Assistant support is now available, too. Control is similar to Alexa’s, and you can set the brightness and colour, or just toggle your lights on and off.

Should I buy the Hive Active Light?

Price-wise, the Active Lights stack up well against the Philips Hue. If you’ve already got a Hive Hub, then the Hive’s price is better, as Hue requires its own hub. Likewise, if you’ve got SmartThings and want some well-priced bulbs, the Active Lights make a good choice – provided you’re happy digging around in SmartThings’ rather crowded web interface.

If you don’t have any other Hive Devices or SmartThings, however, Philips Hue is a better choice. It has a wider choice of bulb fitting, plus LED strips, and has a great range of dedicated switches and motion sensors.

Neat connected light bulbs, but the lack of dedicated switches curb their appeal.