Editor’s note: since the Nest Cam IQ was launched, a new entry-level Nest Aware subscription has been launched, and the camera now has Google Assistant support. These changes make the camera much better value and we’ve increased its score as a result.

What is the Nest Cam IQ?

As smart as security cameras have become over the years, there’s still a feeling that they’re not quite using the full power that’s available to them. With the Nest Cam IQ that changes, and we have what is arguably the smartest security ever: it has a 4K sensor, can track individuals automatically, and has face recognition built in.

Since launch, a new Nest Aware cloud subscription has been launched, effectively cutting the monthly cost in half. And, Nest has now enabled the Google Assistant on the camera, effectively turning the Nest Cam IQ into a Google Home. These changes have turned the best-quality indoor security camera, that was a little expensive to run, into a smarter camera that’s much better value. And the company now has the same technology (bar Google Assistant support) in the Nest Cam IQ Outdoor.

As with Nest’s other products, the Cam IQ is beautifully designed and made. If you’ve seen the Nest Cam Outdoor, the IQ will be instantly familiar, as it uses the same conical design. I have to say that this design looks as good inside the home as it does outside. 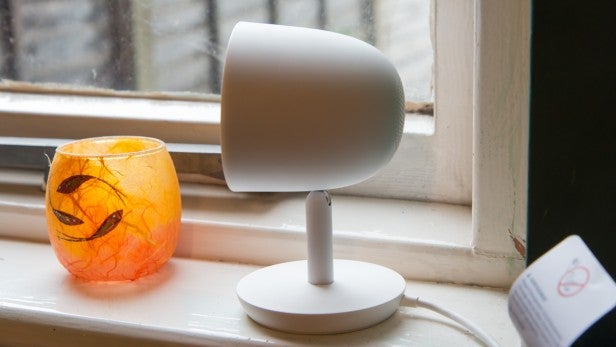 Internally, the requirements are a little different, so Nest has built an entirely new stand that allows a 180-degree swivel and 160-degree tilt without needing any support. And, even pointing straight down, the cam IQ feels completely stable, and unlikely to topple over to its doom. Impressively, you can adjust the camera by hand with no thumbscrews or other annoyances to deal with. 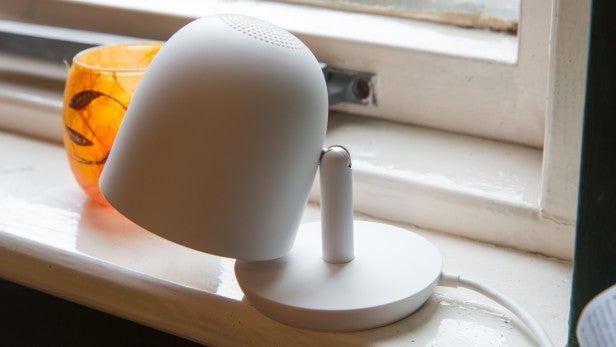 A standard tripod screw is fitted to the stand, so you can wall-mount this camera if you want to, although no mount is provided in the box. Nest powers the Cam IQ with a USB-C cable. The connector has been moulded to fit flush into the stand, giving a neat finish. 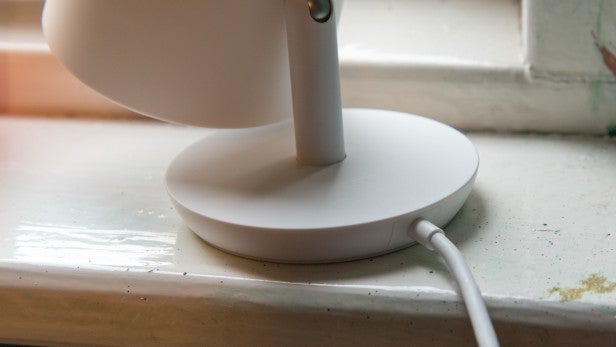 Getting the camera working means using the Nest app, which also controls your other cameras and the Nest Thermostat. I had my camera working in a matter of minutes, with the camera hooking up to my 5GHz 802.11ac Wi-Fi effortlessly. Switching to AC is a good move, giving the camera far more bandwidth than Nest’s previous 2.4GHz-only 802.11n cameras.

The big addition to this camera is a 4K image sensor. Although the footage is only recorded at 1080p, having the extra resolution confers some benefits, and allows some smart new features. Foremost, the Nest Cam IQ can use its Supersight technology to follow an intruder around the room, panning a 1080p frame around the 4K sensor. With 4K giving you four-times the resolution of 1080p, you also get a four-times zoom built-in, although with digital zoom the Nest Cam IQ provides up to 12x zoom from its fixed lens.

A six-core processor means that more can be done in camera. While the Nest Cam Outdoor and Nest Cam Indoor can spot people when you sign up for a Nest Aware subscription, with the Nest Cam IQ, person detection is built-in. Subscribe to Nest Aware, and that changes to face recognition, letting the Cam IQ distinguish between friend or foe.

From the app, you can control when the camera can record and when it can’t. This is particularly important with an indoor camera, as you probably don’t want to bug your home and record yourself walking around. Nest supports schedules, but there’s geofencing built in so that the Cam IQ can turn on when you go out and off when you get home. 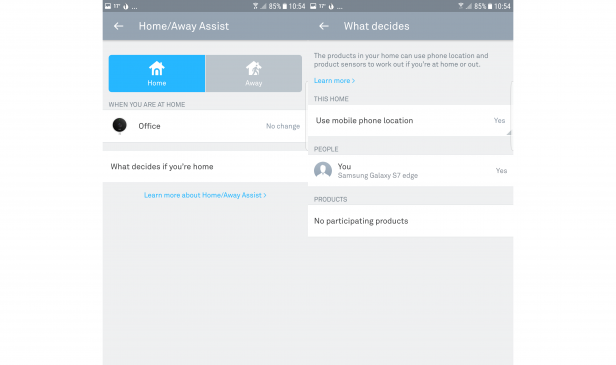 It’s a little annoying that you can’t use both at the same time; rather, you can turn both on, but the two options can conflict and give unpredictable results. I’d like both to play nicely together, so that the camera always turns on with the schedule (say, recording at night), but that the schedule can’t turn off your camera when you’re away; and, returning home shouldn’t turn off the camera if a schedule has turned it on. This is a problem shared on all Nest cameras, and I’m hoping a future app update will fix it. 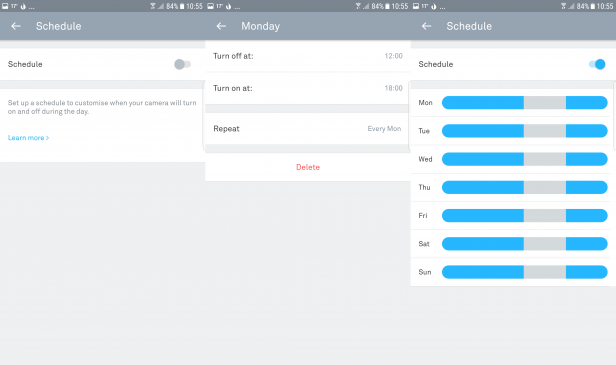 Although the Nest Cam IQ can do more than its predecessors out of the box, you’re still going to want a Nest Aware subscription if you want to keep recorded footage and get the most advanced features. While Nest Aware used to be expensive, starting at £8 a month, a new, cheaper subscription has been launched. Now, the service starts at £4 a month (or £40 if you pay yearly), and includes five-day video history.

With Nest Aware enabled, the most obvious benefit is that the system can record for up to 24-hours a day, keeping every bit of footage; something that rival cloud services don’t offer. Nest’s app is incredible, letting you smoothly scroll through the footage. Thumbnails show you any areas of interest, such as detected movement. A calendar view lets you quickly jump to a previous day; older versions of the Nest app made you scroll manually through all footage. And, you can switch to a notification view, so you can quickly scroll through alerts. 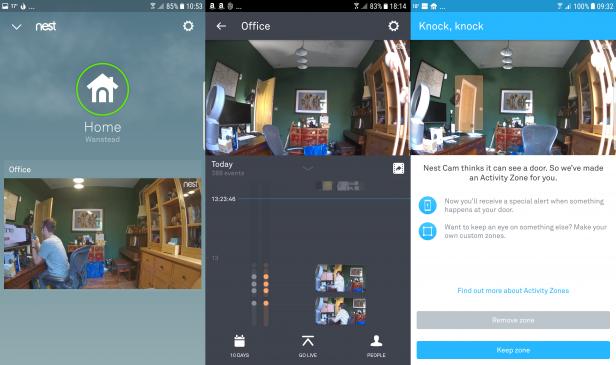 To better control when the motion detection is triggered, you can set Activity Zones. New to the Nest App (and available in all cameras, not just the IQ) is auto door detection: once the camera thinks it’s recognised a door, it will draw an Activity Zone around it. You can manually set your own zones, although the app still doesn’t support this feature and you have to use the website instead. 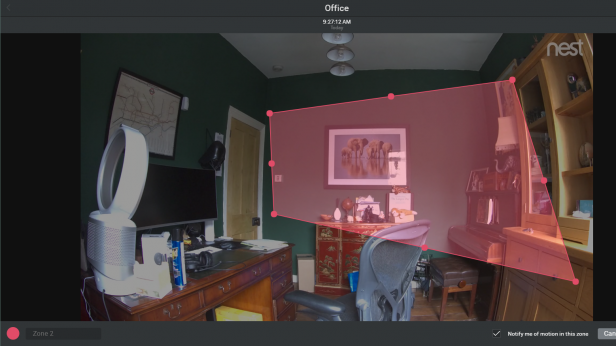 Face recognition works brilliantly. Once a new face has been recognised, you get a pop-up in the app, so that you can say if you recognise them or not. If you do, you can add a name for future reference. As Nest use’s Google’s face detection (the same tech as in Google Photos), the detection rate is impressive. Whether I was wearing glasses or not, and from practically any angle, the Nest Cam IQ picked me up correctly. 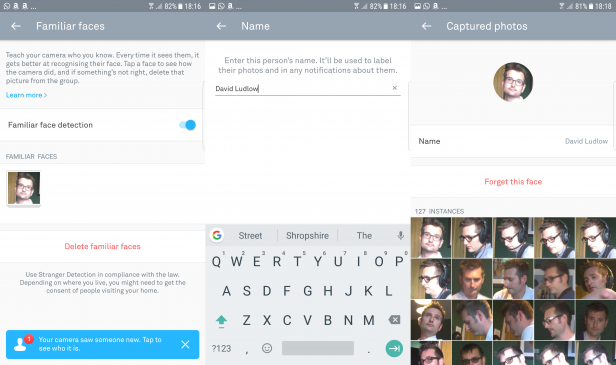 You get different notifications depending on whether the camera spotted a familiar person or not. Familiar people are named, whereas the warning for strangers just tells you that an unidentified person was spotted. Unfortunately, there’s no way to tell the camera to only warn you about unidentified people. 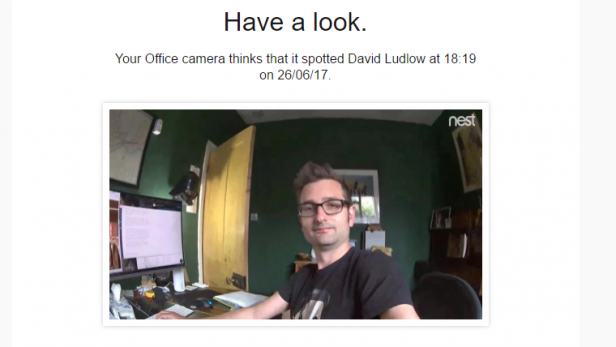 Nest’s Supersight technology is incredible, zooming in and tracking anyone that it spots. Cleverly, you get two 1080p streams: the zoomed-in version, and the panoramic shot of the entire room. It’s easy to switch between the two views, so you lose nothing by having Supersight turned on.

Three microphones pick up audio clearly, adding to the recording. Via the app you can speak to an intruder (or friend, for that matter), with audio clearly transmitted from the Nest Cam IQ’s integrated speaker. Using the microphone, the Nest Cam IQ can also detect the difference between a dog barking and person speaking, and warn you of the two, with a high degree of accuracy. 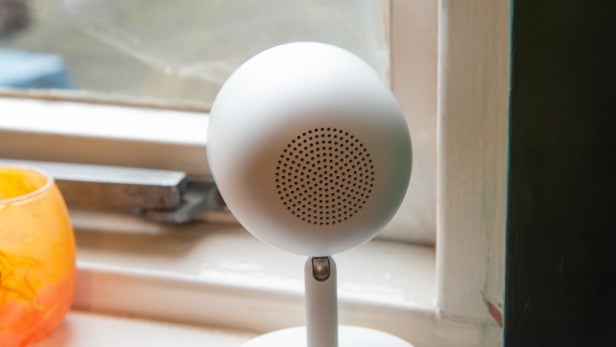 Video quality is exceptional. Even though that 4K resolution is boiled down to Full HD, downscaled high-resolution video looks better than that shot at 1080p. On top of that, the Nest Cam IQ has HDR built-in, pulling out all of the detail in an image. No security camera I’ve tested can match the Nest Cam IQ’s picture quality. With a 130-degree lens, the camera captures practically an entire room, no matter where you place it. Zooming into an image, pulls out extra detail in a way that’s not possible with rival cameras. You’d have to get a Full HD camera with a zoom lens to come close. 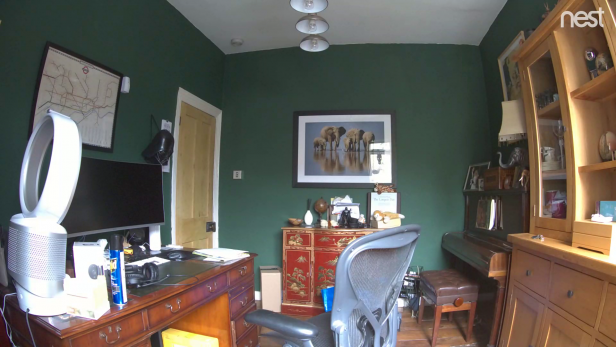 Nest has used 940nm IR LEDs for its night vision mode. These are designed to give better coverage, while the light is less visible to the human eye, so you don’t get the same red glow from this camera as with other models. I’m happy to say that the IR LEDs work well, cleanly lighting up my entire room. 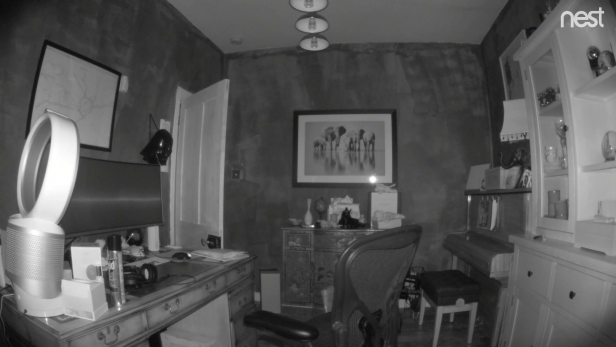 You can no longer set image resolution, with the camera picking quality settings automatically. However, there is a setting to pick quality and bandwidth, starting at Low (around 100GB per month) and High (around 400GB per month).

Nest has an IFTTT channel for the Cam IQ. There are no actions, only triggers (motion or audio detection). It’s a shame that the channel hasn’t been expanded to add actions based on who was detected, say turning on the Philips Hue lights to a different setting, depending on who entered the room. This is something that the rival Netatmo Welcome can do.

Alexa support is good to see, with the skill letting you broadcast the camera’s footage to an Echo Show or Echo Spot. A similar Google Home Action lets you send the footage to a Chromecast. While neither option lets you do much, being able to quickly view live footage can be handy at times.

More recently, Nest has pushed an update that lets you turn on the Google Assistant for the Nest Cam IQ. This basically turns your camera into a Google Home, with the Cam IQ able to respond to, “Hey Google”. You can do everything that you’d expect from a regular Google Home, including getting weather updates, calendar appointments and controlling other smart home devices. But, some features aren’t yet supported: you can’t play music (although there’s little reason to do so) and you can’t make voice calls. 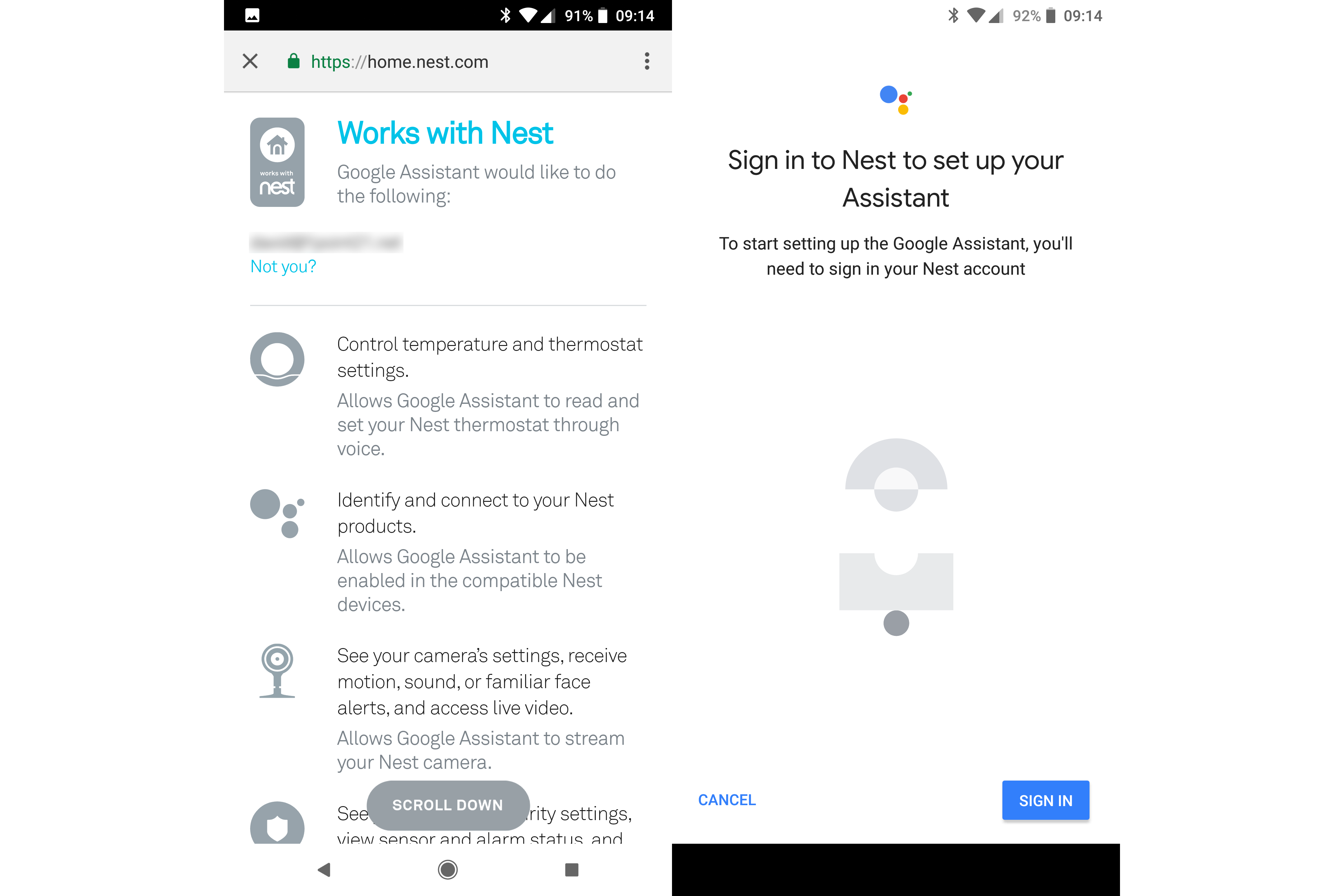 Sound quality is a little behind the Google Home Mini, but voice responses are clear and, thanks to the sensitive microphone array, I’ve had no problems with the camera picking up my responses clearly. Importantly, enabling Google Home on a device like this, just helps extend Google Home control through your home without needing to buy additional hardware.

Related: How to make hands-free calls with Google Home

Should I buy the Nest Cam IQ?

In terms of pure image quality, the Nest Cam IQ is the best security camera that I’ve tested. It’s also one of the easiest to configure and has the most flexible and easy-to-use stand. Face detection is great to see here, especially given how quick and accurate it is. And, Nest Aware is just about the best security cloud subscription service, providing an effortless way to scroll through your security footage.

That said, it feels as though the Nest Cam IQ isn’t quite as flexible as it could be. I’d love to see more control over when the camera turns on and off, and there should be an option to only notify you when unfamiliar faces have been seen.

The big downside used to be the cost of a Nest Aware subscription, but the new five-day video history option effectively cuts the price in half, while providing more than enough storage. Throw in the Google Assistant support, and the Nest Cam IQ is the best indoor camera that you can buy with the best image quality. If you don’t mind losing the face detection, the old Nest Cam Indoor is still a great buy. Alternatively, the Netatmo Welcome has face detection and a smarter IFTTT channel, and it’s considerably cheaper.

A very slick camera, with exceptional image quality and some smart features, and the new subscription option makes it cheaper to run, too.