Available on PC, PS4, Xbox One
Even by Double Fine’s own leftfield standards, Headlander is weird. Sure, you could describe it as being like a 2D Metroid in its basic gameplay, but how many Metroid clones take place in a bizarre ’70s vision of the future where mankind has been destroyed and the robots have taken over? And how many of those feature a protagonist who’s basically just a head preserved inside a jet-powered helmet?

It’s no coincidence that Headlander has been lead by Double Fine’s Art Director, Lee Petty, who also did the honours on its eccentric Russian Doll adventure, Stacking. That was strange, surreal and mostly wonderful. Headlander might be even stranger.

Your heroic head – you have a choice of three – wakes up on a huge starship, many years in the far future. You’ve been awakened by a gang of revolutionaries, keen to overthrow their AI overlord, Methuselah. To do this they need you, the last vestige of humanity, to sneak into the station’s archives and discover Methuselah’s secrets. There, you may learn your own identity and, maybe, help bring back the human race. Of course, the old AI is out to stop you, with an army of robot ‘Shepherds’ standing in your way. 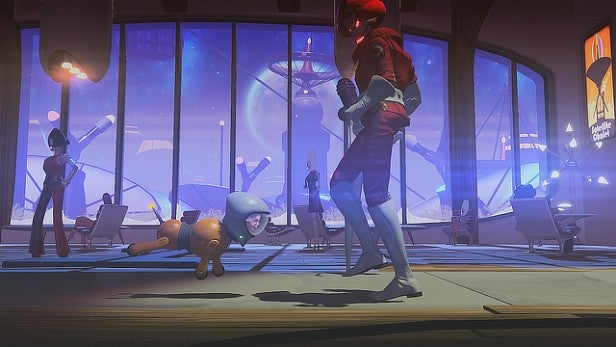 As a flying head you’re pretty much defenceless, but you do have one thing going for you. Your helmet has a vacuum power, enabling you to tug the heads off enemy robots and then dock to replace them with your own. Once docked you can control the robot’s body and fire any weapons that they’re carrying. What’s more, each robot has its own colour-coded security clearance, from red through orange and yellow through to green, indigo and purple. The many doors of the starship won’t open unless approached or blasted by a robot with the appropriate clearance.

The whole head-substituting thing is both a great game mechanic and a brilliant visual gag, enabling you to land your rocket-powered bonce on any number of hulking security droids, robot vacuum cleaners, far-out disco dancers and tiny dogs, then get where it is you need to go.

What’s more, the ship is full of handy upgrades, enabling you to project a helmet shield, thrust through crushers or use your vacuum powers more effectively from greater distances. In classic Metroid style, these new or enhanced abilities enable you to reach areas you couldn’t reach before. 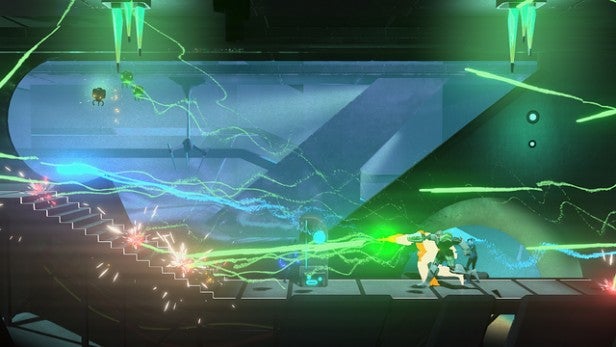 Your robot bodies can’t jump, but there’s still a whole lot of platform-puzzling going on, as you work out which body will help you get through that door, survive the electrified floor, get up to that vent or dislodge that power crystal. Sometimes you’ll know which one you need, but have no idea how to get them to the right place in one piece.

There’s also a lot of combat going on, which Headlander handles surprisingly well through a mix of right-stick aiming and what might be the smartest cover system in a 2D game. To make it that little bit more awesome, Shepherds go up in terms of firepower with their security clearance, moving on from single-shot pistols to mighty three-way blasters, and Headlander does a lot with the way projectiles ricochet around the starship’s chambers.

Picking faults isn’t a challenge. You could argue that this is a premise ripe for complex or disguise-based puzzles, but the game has focused instead on the kind of physical puzzles you’d find in any good Metroid clone (or at least any Metroid clone that had a floating head as its star). If you’re not working out how to be in the right body at the right point, you’re working out how to get across a gaping chasm or how to work your way through a tortuous, Shepherd-filled chamber to take out the power crystals powering a lock on a vital lift. 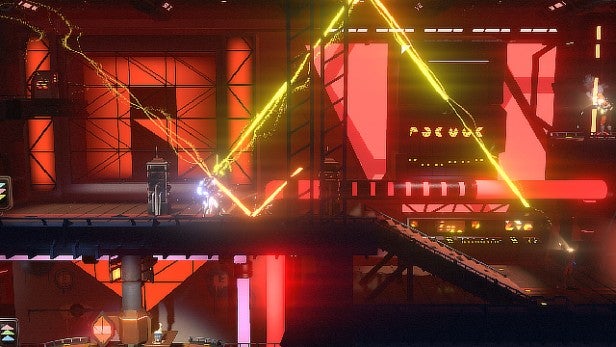 Respawning enemies are a necessity for some puzzles, but also a real nuisance in more complex puzzles with several parts to solve. Meanwhile, a section based around a chess-inspired combat game outstays its welcome, and comes crowned by a mildly aggravating multi-stage boss battle which seems impossible until you spot the easy, slightly tedious way to cheese it. A couple of busy areas also suffer from noticeable slowdown, even on the mighty PS4.

Yet Headlander rises above such niggles because it’s, well, to be honest, so damn cool. For a start, it looks great, the slick cartoon visuals meshing with the ’70s shapes and some brilliant shiny surface effects to create a sci-fi world we really haven’t seen before. True, there are echoes of Buck Rogers and the original Battlestar Galactica, not to mention the ’80s series of The Hitchhiker’s Guide to the Galaxy, but Double Fine has done a fantastic job of marrying these influences together, then adding on layers of groovy colour and retro sci-fi cheese.

The ship squeezes in a variety of different settings and there are opportunities to venture off it later on, with an effective system of fast-travel points to cut down on the inevitable back-tracking. Headlander’s just too smart and breezy to bog you down with that kind of stuff. 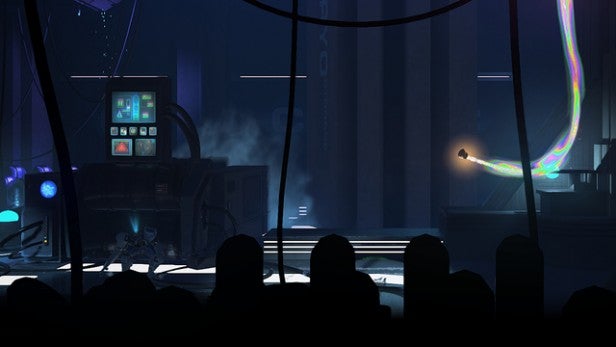 It also has a brilliant cast of well-voiced robot allies and adversaries, ranging from Shepherds dishing out threats to grunts moaning on the job to laser turrets that really don’t want to blast you but, hey, that’s what they have to do. It’s fun trying out the different bodies just to check their angry march or disco strut, and it’s often worth hanging out with the bystanders just to hear all the disco-crazed, dope-addled stuff they come out with. And while there’s nothing new about cathartic, crowd-pleasing battle set-pieces, there is something new about transforming these into surreal, slow-motion fantasias.

This is a game where you can’t even die without getting a psychedelic blast to the back of the retina, where every non-combat robot has a signature dance move. I’m not sure Headlander is always quite as funny or ker-azy as it thinks it is, but 90% of the time it’s right on the money.

Verdict
We’re not exactly short of Metroid clones these days, but Headlander rises above the herd through a mix of its ingenious body-swapping game mechanics and its bonkers ’70s retro sci-fi vibe. It’s great-looking, absorbing and genuinely funny, managing to imbue its robot cast with a real sense of character. And if it has sequences where its ideas fail to click, these aren’t that numerous or annoying. While it’s not quite up there with Psychonauts, Headlander is still one of Double Fine’s finest.