This is a tale of tragedy, tragedy, triumph and tragedy – pretty much in that order.


Tragedy 1: Back in the distant 1990s, the graphic adventure game was in its heyday and Lucasarts was its undisputed king. In games like Secret of Monkey Island, Day of the Tentacle, Sam n’ Max Hit the Road and Grim Fandango, designers like Ron Gilbert and Tim Schafer seemed to have hit on a magic formula of cryptic puzzles, lovable characters and crazy humour. These games were smart and funny; the puzzles made your brain hurt, the laughter made your guts ache. Then along came glossy 3D graphics, realism and cinematic presentation, and suddenly people didn’t want graphic adventures anymore. While a few creep out every year, the genre is basically dead. Its once heroic developers now languish in obscurity. 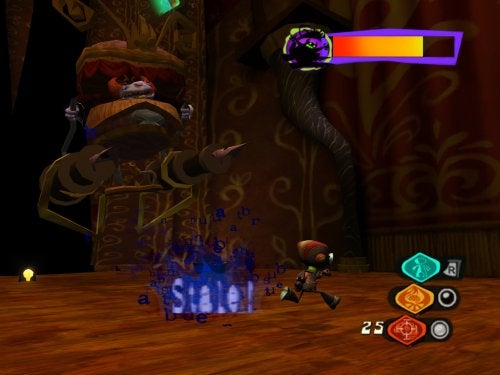 Tragedy 2: Back in the distant 1990s, platform games were in their heyday and Sonic and Mario were kings. In games like Super Mario World and Sonic 2, teams from Nintendo and Sega seemed to have hit on a magic formula of cool level design, colourful characters and flowing gameplay. The games were fast-paced and entertaining; the action made your thumbs ache, the challenge kept you coming back for more. Even when glossy 3D graphics came along, games like Super Mario 64 and Jak and Daxter proved that the basic ideas could be expanded into luscious, imaginative 3D worlds. So why, in the last few years, has the platform game lost its way. Generic kiddie titles bolstered with arcade mini-games and racing sections are now the norm, and the grown-ups left the party long ago. If the platform game isn’t dying, it’s certainly in a terminal decline. 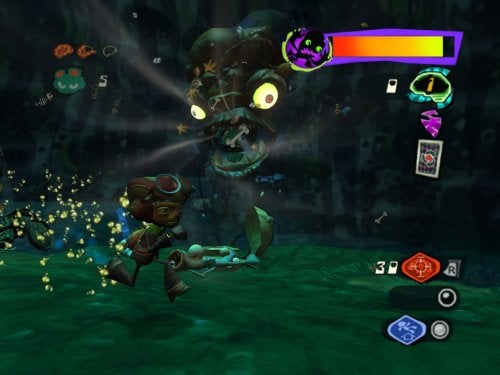 Well, here’s the triumph. Psychonauts is a platform game. In fact, it’s an extremely good platform game. And there’s more. It’s designed by Double Fine, a team led by Tim Shafer, who also worked on the aforementioned Day of the Tentacle and Grim Fandango. This makes it a platform game that feels awfully like an old Lucasarts graphic adventure, which in turn, means it’s ludicrously funny. And that’s just one reason why it’s one of the most enjoyable games of any type in years.

Now, I wish I could relay this funniness to you, but I can’t. The script is razor-sharp –peppered with the cool one-liners and those odd bits of sideways (even backwards) thinking that made Day of the Tentacle so great – but I don’t want to repeat choice moments because a) it’ll spoil them for you and b) they’re an awful lot funnier in context. There are surreal jokes, character jokes, even slightly childish vulgar jokes. Just take my word for it: if you can play this game without laughing out loud once, then be worried. You’re almost certainly the sort of dull, humourless misery-guts that people go out of their way to avoid in pubs. 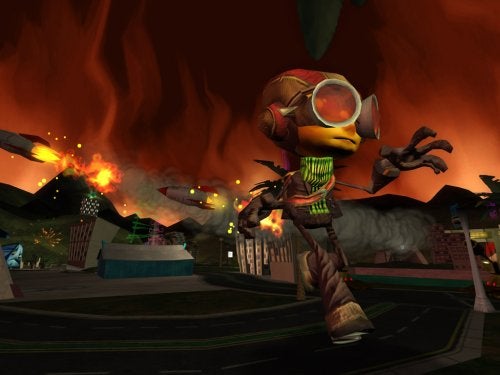 What’s more, Psychonauts is the first game in ages where I’ve actually found myself liking the characters. We have a hopeless, naïve wannabe hero in the classic Guybrush Threepwood mould, a range of misfit kids with psychic powers, an ageing ex-agent who’s lost his marbles, a cool, levitating party girl and a cast of loonies who make Norman Bates seem like a mildly neurotic cross-dresser. Basically, Psychonauts has oddball charm in spades.


But oddball charm in spades wouldn’t be enough if it weren’t for the game’s secret ingredient: lashings of raw imagination. To understand how this fits in, you need to know a little about the plot. Basically, Psychonauts takes place in a wilderness training camp for would-be psychic agents. Into the midst of the ‘gifted’ and ‘special’ kids comes Raz, a self-taught teenage mind-warrior whose one wish is to join their ranks. Raz proves his mettle and joins the programme, but as he progresses he uncovers a plot to harness minds for the purposes of war. To defeat it, Raz is going to have to fight his way through the mental landscapes of some of the most deranged, disturbed and downright twisted minds around. 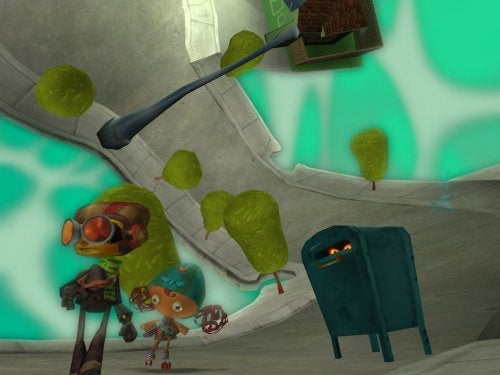 And it’s these ‘mindscapes’ – the levels – that have allowed the imaginations at Double Fine to cut loose. There are levels set in smoked-out battlefields, neon-lit discos, a revolving cube that shifts shapes and throws out mad platform structures. There is a level set inside the internal theatre of a washed-up loony actress, and another set inside a city that only exists inside the artificially boosted mind of a giant bottom-feeding lungfish, through which you stomp like a teenage Godzilla busting buildings and trampling tanks. The best level – the one that’s destined to be the game’s signature – is a trawl through the paranoid nightmares of a conspiracy nut, in which suburban neighbourhoods twist away in vertiginous patterns while agents in trenchcoats maintain feeble disguises in a monotone voice. These worlds are wild, distinctive and – above all else – original. There’s not an ancient temple or frosty mountain-top in sight.

Better still, the team has used these levels to sneak in classic graphic adventure puzzles through the back door. Some are based around Raz’s growing roster of psychic powers –levitation, invisibility, pyro- and telekinesis – which he develops by ranking up through the Psychonauts programme. Others are a question of finding the right item to do the job, while others still combine both traits. This isn’t just a game about jumping, it’s also, rather appropriately, about using your mind. 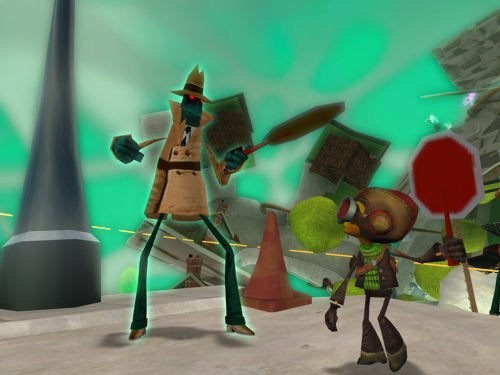 So it’s funny, it’s entertaining, it’s imaginative – is there anything that’s not top-notch? Well, not everything in Psychonauts is perfect. The graphics are full of beautiful cartoon design and work well within the spirit of the game, but I can’t say there’s much here with a real ‘wow’ factor. To be honest, though, if you’re prowling these landscapes looking for parallax mapping or fresnel reflections on the water, then you really need to think about the way you look at games. There are occasional problems with the camera, a couple of frustrating moments later on that really needed a little more playtesting, and some of the boss battles are annoying. But really, that’s about it. The controls work, the length is perfect, there are heaps of collectible bonuses, and even the audio is beyond reproach: the zany voicework puts other cartoon platformers to shame, and there’s a brilliant score that chimes perfectly with the game’s quirky feel. 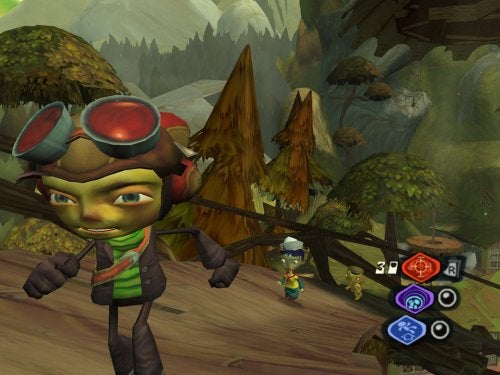 Put simply, in a better world Psychonauts would (at the time of writing) be sitting pretty at the top of the games charts. It’s been out in the US for nine months or so, and nearly every magazine and website you might mention has doled out plaudits and awards to the extent that some critics would probably front you the money to buy it if you asked them nicely. (Note: I wouldn’t, but then I’m not so nice). The tragedy is that nobody seems to be buying it – the general games playing public would rather have the usual licenses and franchises instead. Well, that’s fine for them – just make sure that YOU don’t miss out. Like Ico, Beyond Good and Evil or Metroid Prime: Echoes, Psychonauts is one of those games that you’ll hear mentioned in cult classics corners for years to come, yet it’s so funny, so compelling and so darn straightforwardly brilliant that it deserves the widest audience possible. Go on, play it now while you have the chance.


A fantastic, imaginative, literally mind-warping platform adventure with heaps of idiosyncratic character and charm. If only a few more of you would buy it!