Exclusive to PS4
Remember Hardware: Online Arena? You know, the 2002 online vehicle combat game for PS2? No? Well, you’re not alone. Despite a place in gaming history as a pioneering online console game it’s not up there with Halo, SOCOM, Rainbow Six 3 or Unreal Tournament/Championship in terms of fond memories or influence, and drifted into obscurity long ago.

In this respect, Hardware: Rivals looks sure to follow form. Right now it’s free on PS Plus and fun enough to warrant a download, but I’d be hugely surprised if anyone’s still playing it in six months’ time.

Like its not-so-illustrious predecessor it’s a vehicle combat game, pitting tanks against jeeps against armoured buggies around four arena stages. You steer with the left stick, accelerate and brake with face buttons or the L2 and R2 triggers, and aim your vehicle’s turret with the right stick. Each vehicle has a permanent primary weapon with unlimited ammo, while a range of secondary weapons can be picked up by driving through floating icons. Ammo for these is extremely limited, and you only the last weapon you drive through will be equipped. 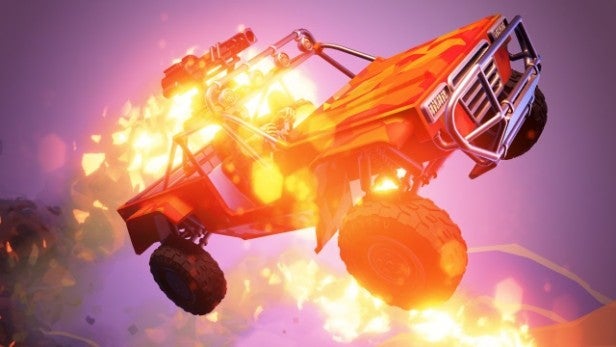 Sounds simple? Well it is simple, and there isn’t much more depth to it than driving around and blasting away. The game modes taken in your standard deathmatch, team deathmatch, control point and elimination modes, with the latter giving you one life per round for a best-of-five team deathmatch.

The nearest Hardware: Rivals comes to innovation – or even stealing ideas from games under ten years old – is a map-specific special weapon that covers the ground in ice, unleashes low-lying clouds of deadly dust, brings down an airstrike or covers the map in fire. Get underground, inside or to high ground, as appropriate, if you don’t want to face the fatal consequences.

On both the mechanical and visual levels, Hardware: Rivals is a perfectly solid little game. The vehicles handle well, the controls are responsive and it’s reasonably well-balanced. Sure, there are two modes where the tanks feel ludicrously overpowered, with little advantage to be seen in driving jeeps or buggies when there’s a single life to be safeguarded or control points to be occupied, but generally you have to weigh up whether you prefer the speed and agility of the smaller vehicles vs the armour and high-powered, slow-firing primary weapons of the tanks.

All four classes of vehicle are fun to speed and blast around in, even if there seems relatively little to choose between the jeeps and buggies or the two different types of tank. 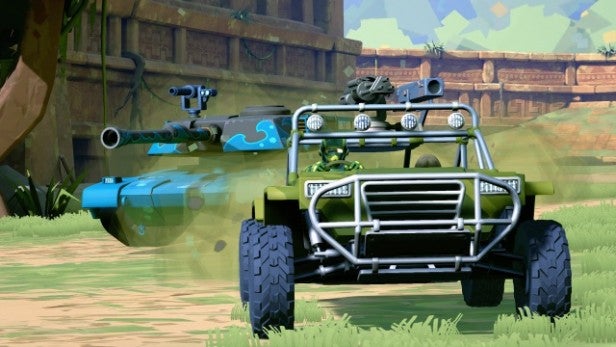 The problem with Hardware: Rivals is that it never goes beyond that. It’s enjoyable enough to keep you occupied for an evening or two, but it lacks the distinctive twist, the singular great idea, that might keep you coming back beyond that.

The weapons are serviceable, but never ingenious. The vehicles lack any special abilities that might lend the game some deeper tactical interest. There are acrobatic or combat-based challenges you can pull off while you’re fighting, but you’ll be too busy fighting to bother. It’s all just a little too bare bones.

It’s not that the game does nothing to retain its players. There’s a persistent progression system with new finishes to unlock and new add-ons to buy, most of which only change the appearance of your tank or driver, though a few can be used to modify your movement or targeting. We’re also promised a trickle of new events as the game goes on, with a buggies and railguns-only mode promised for the first weekend.

There are even attempts to inject some drama, informing you that one player has become your new rival, and that you’ll get extra XP for beating them in combat. All the same, in a world where Destiny, Call of Duty: Black Ops 3, Rainbow Six: Siege, Rocket League and Star Wars: Battlefront exist, it’s hard to work up much enthusiasm for a game as average as this. 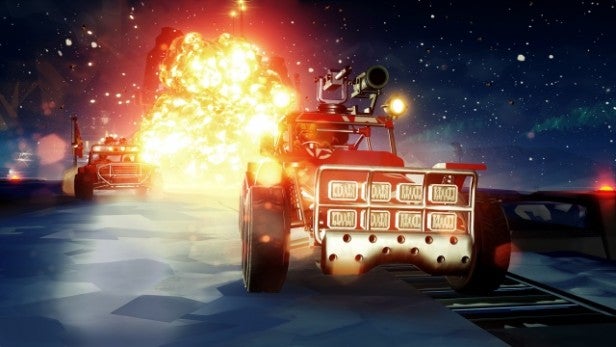 The impression of mediocrity even extends to the Unreal 4 engine visuals, which opt for the kind of bright, breezy cartoon look that used to be distinctive but now seems utterly generic. Valve can do this with Team Fortress 2 or Nintendo with Splatoon because so much care and detail goes into each character, their style and their animation. Splash Damage’s Dirty Bomb makes a stronger fist of the same kind of style.

Hardware: Rivals? Well, it looks OK. If ever a game felt destined to be damned with faint praise, this is it.

Verdict
While it’s free on PS Plus Hardware Rivals is worth a punt. It’ll keep you busy for a couple of evenings even if it won’t displace your favourite online games.

Beyond that, though, it’s hard to recommend. At the regular price of £16.99 it’s not such great value, and most players will probably have deserted it within a month or two.

In the competitive world of online multiplayer just good enough is no longer good enough. Games like Hardware: Rivals need to bring us something more.