Star Wars Battlefront has been out for just over a year. It was generally well received, but the overriding sentiment was that it was a bit basic. The cynical would say EA withheld the good stuff so it could sell DLC packages and Season Passes. I reckon time was limited due to the game coinciding its launch with the release of Star Wars: The Force Awakens.

EA did subsequently release DLC packs, and some of it was indeed good stuff that would have made the original release a better game. The Death Star DLC introduced space battles and multi-phase modes with consequences, a move that continues with Rogue One: Scarif. This is the fourth and final expansion planned for Battlefront – just as Rogue One hits cinemas – and it’s the best one yet. 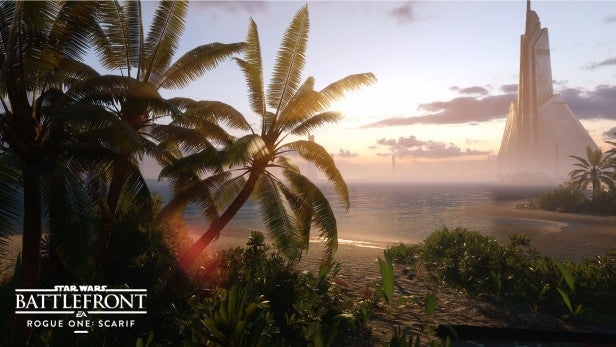 As the name indicates, this expansion pack is all about Rogue One, which is set before the events of the original trilogy. Narratively it doesn’t make a difference, but you do get to run around an all-new location: Scarif. If you’ve paid any attention to the marketing material for Rogue One, you’ll have seen the posters showing some sort of beach confrontation. This is that battle.

I should point out here that you don’t need to worry about spoilers, as the game gives away nothing that hasn’t been in the trailers anyway: you fight on the beach, there’s some stuff to blow up, and some stuff to steal. The new playable Hero characters are Jyn Erso (she has a stick) and Director Krennic (he has a cape) but again, there are no plot details.

What you do get is a great new playground. Scarif is a lovely setting, very different to anything else in Battlefront (or, indeed, Star Wars in general). It’s essentially a tropical island. Patches of jungle open out onto wide beaches. There is an Imperial base here, so you get half-built ships and some narrow paths too. There’s a good variety to the action: storm the beaches or take pot-shots while hidden in the trees. The pace is more frantic, which feels more appropriate for something with ‘Wars’ in the title. 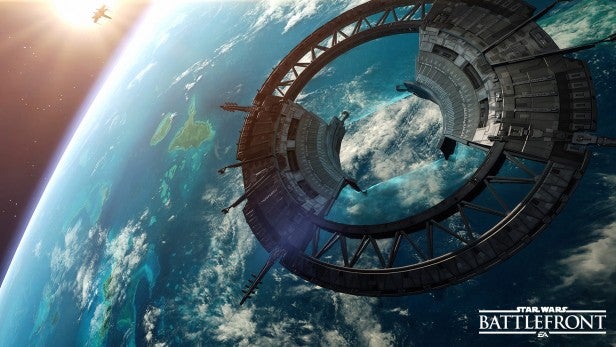 My only problem is that not all shrubbery is created equal. Some sections can be run through, while others act as walls. In the heat of battle, it’s not always easy to tell which is which, so you may end up getting cornered. That’s clearly not an intentional move, just awkward design. It’s not a huge problem, though, as you do learn your way around, and you can also rely on your trusty jetpack to get you out of a tight spot.

What can you do on Scarif? A number of familiar game modes return: Walker Assault, Blast, Fighter Squadron and Turning Point. There’s also a new mode called Infiltration. The multi-phase mode introduced in Death Star was a good addition, so DICE have done the same thing here. The idea is to add an element of consequence to the game, so you have a reason to care about winning or losing. As before, there are three phases. 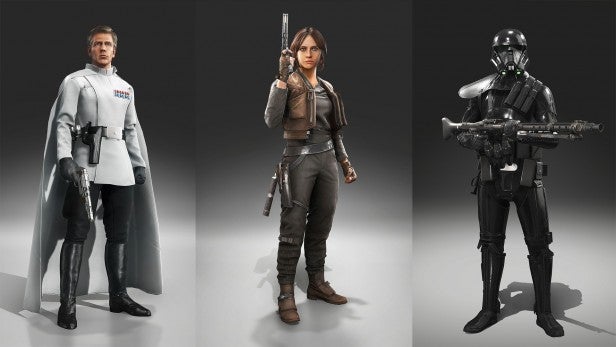 Phase one is The Approach, which has you in space. Rebel U-Wings are trying to get to Scarif and you must protect or destroy them. If you’re a Rebel, you are randomly selected to fly the U-Wing, which is fast but weak and requires a tactical approach. This makes the flying experience more focused and exciting, which is good, because otherwise the standard Fighter Squadron mode is a bit ponderous. If a Rebel gets through, the next phase begins.

Next up is Distraction, which has you on foot. This is your first look at the new uniforms, which are a bit bland on the Rebel side, but the Imperial Shoretroopers/Deathtroopers look badass. Rebels must rig one of several cargo ships with explosives, and Imperials must stop them. It’s nothing particularly fresh, playing very much like the Droid Run mode, which means you need to watch out for people camping with sniper rifles.

If the Rebels succeed, a ship blows up and phase three begins: Extraction. This is another on-foot mission, where Rebels now have to steal data tapes and get them back to their U-Wing. The catch: you can’t use a jetpack while you’re carrying the tape, which gives the Imperials an advantage. This plays a bit like Cargo mode.

There is one crucial addition to the on-foot modes: the ability to hop into a U-Wing. Instead of piloting the ship, you occupy the gunner position. This essentially an on-rails segment with a very powerful cannon. It’s great fun, and an effective way of keeping things fresh. 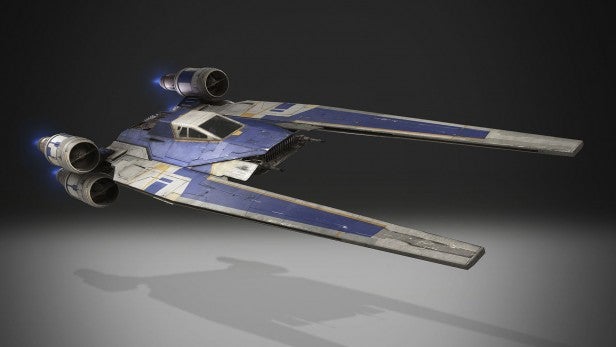 Put it together and Rogue One: Scarif is the best DLC Battlefront has to offer. It’s taken a full year, but EA and DICE have clearly taken fan feedback into consideration. It’s a sharper, tighter experience with more variety, a better pace and the ability to release hell from the sky.

The result is hugely satisfying, and a compelling reason to get back into the game. If you’re going to get one expansion pack for Star Wars Battlefront, make it this one.