Available on Xbox One (reviewed), PC
It’s the Halo sequel not many fans asked for, but that doesn’t mean that Halo Wars 2 isn’t any good. Together 343 Industries and Creative Assembly have crafted a game that owes more than a little to StarCraft II but that captures a lot of what’s special about Halo. The RTS has always been a challenging genre for console, and Halo Wars 2 doesn’t entirely escape the usual problems, but if you’re itching for a more tactical experience of the Halo universe, this one’s mostly a success.

Set eighteen years on from the original Halo Wars, the sequel pits Captain James Cutter and the crew of The Spirit of Fire against a renegade Covenant faction, the Banished, led by a particularly savage Brute named Atriox. Atriox and his chums have taken over The Ark, an ancient Forerunner artificial world and the birthplace of the titular rings of the Halo series. Having wiped out human research bases on the Ark he now has plans to open up its secrets and use its terrible powers to wreak vengeance on, well, just about everyone who isn’t Banished. Cutter and his UNSC forces, abetted by the last surviving AI on the Ark, are all that stand in his way.

If there’s one thing Halo Wars 2 gets emphatically right it’s the Halo content. You can feel it in the music and the front-end menus, the lengthy cut-scenes and the near-constant referencing of background lore. The spirit of Halo can be found in the battlefield chatter of gung-ho marines and cowardly grunts, the super-powered fighting abilities of your Spartan heroes and the hyper-intelligent but weirdly vulnerable AIs. If you’re looking for the sense that you’re fighting climactic battles straight from the Halo playbook, only from the perspective of a commander controlling units from the sky, it has you covered. Units and abilities either come straight from the series or fit in so well you’d swear they’d always been there. 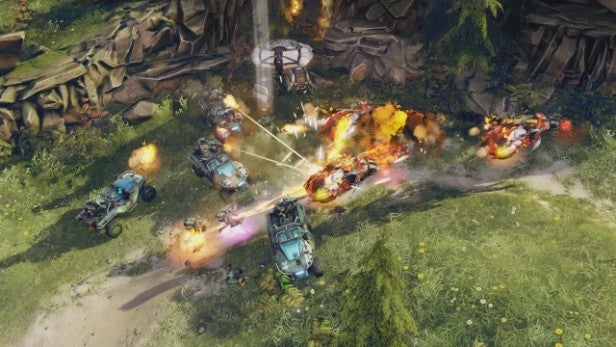 The visuals don’t lack attention to detail either. Your troops might not have the close-up detail of their Halo 5 equivalents, but they’re beautifully animated and the scenery cleverly remixes all your favourite locales from the entire Halo saga. Despite a few quibbles – more lifelike trees might have been nice – this is easily one of the best-looking RTS games on any system, though given the lack of progress in the genre recently that’s not saying all that much.

But if the Halo stuff is good, what about the RTS stuff? Well, Halo Wars 2 does a fine job of simplifying the action for console users without rendering it entirely brainless. Bases are modular, with ready-made slots to add resource-gathering and troop training facilities plus the usual vehicle and aircraft manufacturing centres. What resource-gathering there is happens automatically, requiring very little effort bar the odd sojourn to grab some supplies or energy if you spot them lying around. Build queues and skill trees are streamlined but effective, and handy tool tips make it clear what purpose an upgrade or a new facility has.

Controlling your troops won’t be a challenge. You highlight units with a reticule then tap a button to select them, or tap and hold to select units in a radius. You can also tap RB once to select all troops in immediate view or twice to select every unit on the field. You can garrison troops in specific structures or use special abilities with a press of Y. The AI isn’t perfect but it’s also not too dumb, and keeping your guys moving and shooting usually works pretty well. 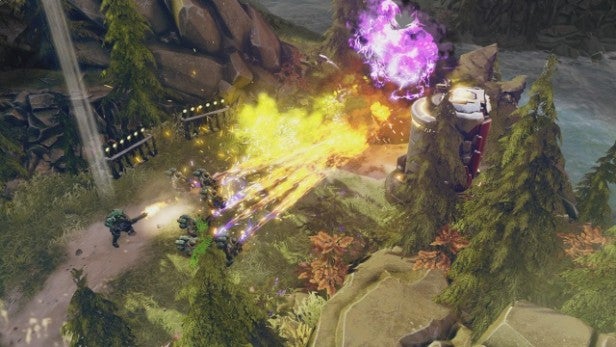 There’s some smart thinking going on behind the basics, too. As you play you can build up a range of Leader abilities, enabling you to heal or repair units or call down missile strikes, mines, turrets and ODST troopers. Upgrading skills makes them even more powerful, and using them wisely can be a game-changer, turning the tide of battle when you need it most. Meanwhile Hero units – your faithful trio of Spartans – also play a crucial role, not least because they’re much tougher than ordinary units and can leap on and hijack Banished Wraiths and Locusts.

While the mission design doesn’t start off on a stellar footing, it soon improves in ways that show Creative Assembly has been paying attention to Blizzard’s work in StarCraft II. There are very few simple ‘build a big base then crush your enemy’ missions, and instead the action focuses on exploration, tactical assault and challenging defence. Every mission has multiple phases, so that one part might have you locating and defending friendly forces, the next might have you touring the battlefield with long-range artillery units so you can get them in place to bombard a Banished position.

There’s even some real drama in some of the defensive missions, where you seem to be always just one unit away from falling to wave after wave of foes, while one particularly brilliant effort reconfigures the RTS elements into something closer to a tower defence game. Perhaps the best sees you showing the Banished what it’s like to be on the wrong end of a Scarab. After years of taking the big guys down in multiple Halo games, this is a real treat. It’s just a shame that the story grows confusing and that certain scenes are bigger on spectacle than they are on just explaining what the hell is going on.

There are other places where the Halo Wars 2 campaign puts a foot wrong. Some missions are very dependent on build order to fend off enemies you won’t discover until you’re several minutes down the line. Get it wrong and your army is decimated in an instant sending you back through a lengthy reload. It’s not a big issue, but it pays to save often. As you might expect, troop AI also has its problems, sometimes failing to spot a huge enemy behind them and sometimes taking the worst possible route between two positions. I’ve seen worse from major PC RTS games, but it’s another reason to keep saving if you want to avoid a nasty surprise. 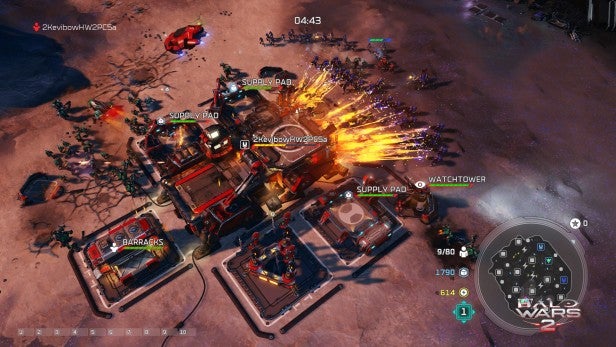 The deeper issue is the challenge of handling multiple battlezones using the controller. True, you can flick between groups of units using the D-pad, but doing so is often confusing. While you can set up control groups on Xbox One and switch between them with a right-trigger modifier, it’s hardly intuitive and the view doesn’t move automatically from group to group. A turbo-scroll button on LB can help, but even that takes a lot of getting used to. Perhaps this explains why a lot of missions are relatively linear, allowing you to focus on a defensive team back at base and an offensive team pushing for objectives. At times we’re back in the days of the Command and Conquer Tiberium saga, where the old ‘lasso everyone then click on your objective’ worked much of the time. This isn’t necessarily a bad thing, but it limits Halo Wars 2 as an RTS.

This issue also rears its head in multiplayer. There’s a real sense that the traditional build your base then batter the enemy format isn’t the focus, with the emphasis more on console-friendly quickfire modes designed for more aggressive styles of play. Domination, for example, has you wrestling over control points while Stronghold sees each player starting with a ready-made base and a stack of resources, ready to build fast, move, overwhelm and then hold more strongholds than the enemy within a strict time limit. While there’s some scope for sneaky strategy, playing defensively tends to get you nowhere fast.

This attitude reaches its apex in the new Blitz mode – an interesting collision of the RTS and collectible card game with MOBA elements thrown on top. Instead of building and destroying bases you occupy control points with units summoned using cards pulled from your deck. Some cards have added modifiers to make that unit more powerful, while others add new perks or give you awesome destructive powers. The tricky bit is that to play cards takes a certain amount of energy, and while you can win some through fighting you’ll also need to find and smash energy drops to get a top-up. Not only do you have to divide your troops to hold the control points; you have to have some out there foraging as well. 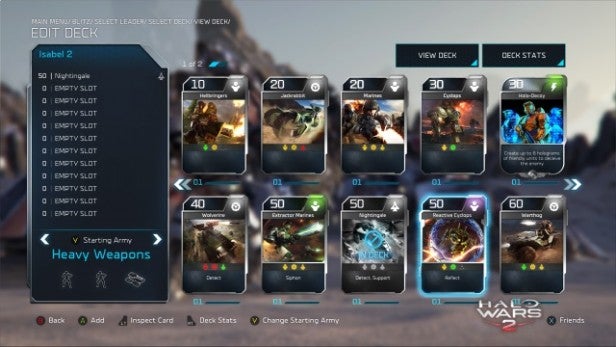 Blitz is ridiculously fast-paced – even breathless. With battles taking only ten to fifteen minutes it’s almost perfect for a crowd raised on MOBA and FPS games. You can earn more cards by completing challenges and succeeding in your primary and secondary objectives in the campaign, though Microsoft will also happily flog you more for real money if you’re struggling. The lure of arranging and upgrading your decks is pretty powerful and there’s potential here for a multiplayer mode with legs. However, it’s so fast-paced and fiercely contested that it might actually put off some of the more casual audience it’s trying to address.

What’s more, there’s arguably more actual strategy in the deck building than there is in the minute-by-minute gameplay, as the sheer pace and the challenges of controlling different groups of units make it hard to do much more than quickly deploy your troops, select them then send them to a control point or energy drop. Blitz is a lot of fun, but is it tactical? I’m not so sure. If you’re looking for something more thoughtful, stick to the standard multiplayer modes – and even in those you shouldn’t expect a whole lot of room for smart manoeuvres or real finesse.

Matchmaking at launch seems fast and effective, even if the lack of ranked modes right now is disappointing. My only other real gripe about the multiplayer is that there’s not much difference between the factions. While facilities and units differ – and sometimes in interesting, strategic ways – the Banished forces are basically a mirror of the UNSC ones, so you don’t get the kind of compelling tactical difference you had in playing, say, the Zerg or Protoss in the StarCraft games. Instead, it’s the leaders that make the most difference, with powers and perks that make them better equipped for more aggressive, more defensive or more skills and tech-based styles of play.

Halo Wars 2 suffers a little from its console limitations, but it’s a solid RTS with a strong campaign and a good overall feel for the Halo universe. After a slow start the mission design grows much more interesting and while there’s little here you won’t have seen in a StarCraft, it’s all handled with variety, pace and drama. There’s potential too in the multiplayer modes, particularly Blitz with its unique hybrid style. It might not be the Halo sequel that you asked for, but it’s a fine one to be getting on with.