It’s been a strange year. I never thought 2015 would be the year that saw me spending my weekends rocking out with a plastic guitar again. But here I am, packing away the Rock Band 4 kit just in time to set up Guitar Hero Live and its redesigned guitars.

Rock Band returned in September, launching five years after the last series’ entry. But October’s spotlight is falling on Guitar Hero Live (and some other major titles). Publisher Activision and developer Freestyle Games is totally revamping the game, again after a five year hiatus.

But unlike its rival, Guitar Hero Live is trying to reinvent the musical simulation genre. Gone is the more traditional five-coloured button array for two rows of three buttons. Instead, you’ve got a trio of white buttons along the bottom, with three black buttons on the top row. 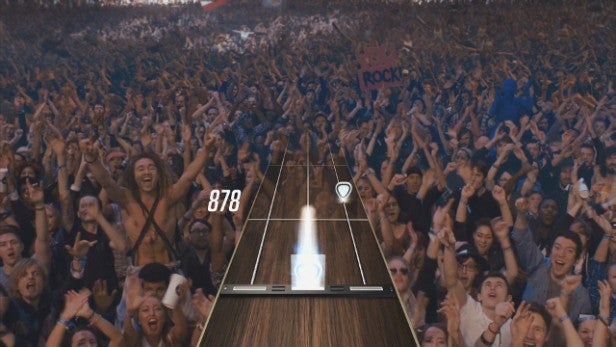 It’s not all new, though. You’ve still got the strum bar, which you’ll need to press to sound the notes, and a whammy bar for bending notes on a whim. Plus, Freestyle Games has made sure the Hero Power button is there within pinky’s reach if you’re not feeling rock enough to tilt the whole guitar to activate Hero Power.

But the idea behind switching out the coloured buttons for this new black and white combo is to make the overall gameplay feel more like you’re playing a real guitar. Yes, yes, we know, it’s still an undersized, plastic guitar without strings, but Freestyle Games is definitely onto something here.

Its still the same formula as before: hit the appropriate button as it hits the line along the bottom of the screen in time with the music.

The button positioning makes it feel as though you’re switching between strings on the fret board when you change between black and white notes. Then being asked to press more than one button simultaneously mimics chord progressions you’d make on a real guitar – albeit less complex.

I did find learning the new control system took quite a while, though. It’s particularly difficult on the Regular level, strangely enough, as the notes don’t always correspond to the guitar tunes you’ll hear. This changes as you turn it up to Advanced, so don’t feel like it’s just you if you’re struggling with the rhythms of Regular. 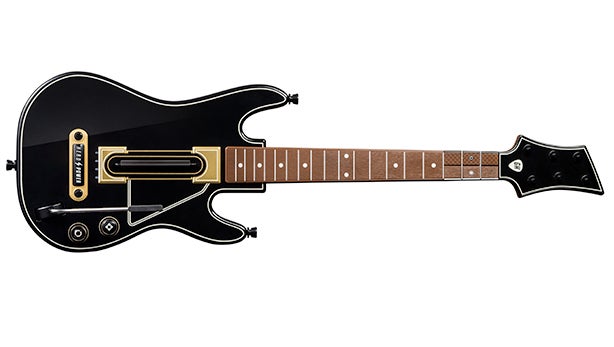 Although the design changes are a welcome revamp to the Guitar Hero
series, the guitars themselves leave something to be desired.

When you’re paying these kinds of prices – although it’s considerably less than the £109.99 Rock Band 4 guitar-only package – you expect a premium product. But the guitars’ buttons are very noisy, making a loud click with each press, and the strum bar creaks and clicks too. This means you need to have the volume on your TV fairly loud in order to hear the often subtle guitar tracks.

What’s more, you need a Bluetooth dongle for each guitar controller. This dongle must be inserted into your console of choice in order to make the kit compatible. It’s not a huge issue most of the time, but if you wanted to play on PS4 with two controllers and a USB microphone, you’re going to have to invest in an USB hub to use them all at once. The PS4 only has two USB ports after all. 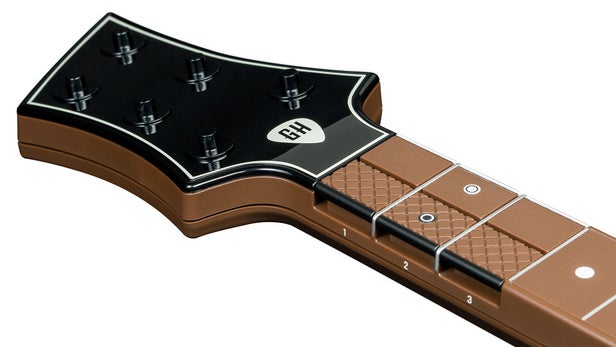 Which brings me on to the actual gameplay. It takes the form of two distinct sections in this revamped Guitar Hero game: Guitar Hero Live and Guitar Hero TV (GHTV).

Firstly, you’ll need to play through at least some of Guitar Hero Live in order to access GHTV. It’s more of the campaign style portion of the game, and it’s probably what you’ve been seeing in all the ads.

In Guitar Hero Live you become the lead guitarist in a variety of fictional bands as they play their way through two festivals: Rock the Block and Sound Dial. You’ll move from smaller stages and make your way up to the headline spot.

And the massive difference with Guitar Hero Live is that you perform from the perspective of the lead guitarist, all in front of a live-filmed audience that reacts to the way you perform. Start messing up your notes and the audience will stop cheering and look at you in disbelief. Your band mates will start getting grumpy and attempt to motivate you. Continue to perform badly and you might just find the audience starts throwing things.

Play excellently though and you’ll discover the crowd starts to go wild, your band mates are elated and the whole venue is buzzing. Even I started to feel proud of myself as I got a slightly cheesy thumbs up from the roadies. 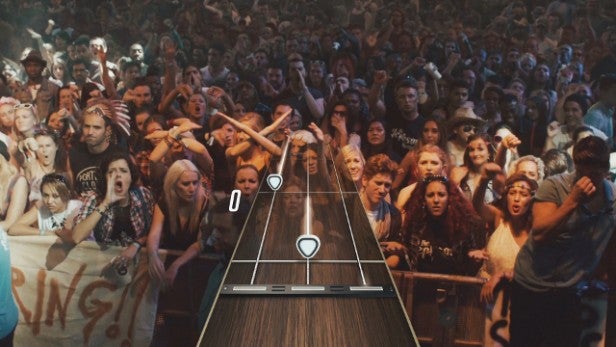 But the problem is that the audience’s reactions can change in the blink of an eye, with a silver shimmering of the screen nonetheless.  I remember once I’d managed to reach a personal best 140-note score streak, missed one note and the audience’s rapture suddenly turned to scorn.

It’s a shame the audience’s change isn’t more of a gradual transition or at least a less obvious one. The shimmering screen seemingly hides the cut between film, but it really detracts from the realism.

But saying that, at first it’s a neat trick having such live reactions. And it makes a change from the cartoonish caricatures that we’re used to in music simulator games like these.

There’s another issue with Guitar Hero Live too and that is that the songs are a little too kiddy-friendly – think Katy Perry, Skrillex (eh?) and more. But, the Live portion serves as a great introduction to what I feel is the real appeal of Guitar Hero Live, and that’s GHTV.

This is where the real sociability of Guitar Hero Live comes to life and brings the series into the present day. 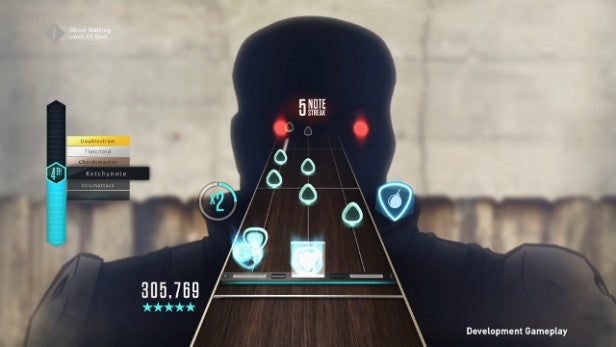 GHTV is comprised of non-stop channels, with two available at launch and one launching soon after, and the option to play any of the songs in the library on demand.

Of the two channels currently available, the first caters more for those who like rock, while the other is a little more mainstream. It’s a great way to dip into the Guitar Hero Live experience whenever and with whoever you want. You can add a second guitar or even a vocalist (via any USB microphone, although one isn’t included in either bundle) at the touch of a button and rock out to a continuous stream of songs.

I’ve even used it as a music discovery tool, as I’ve found a few golden oldies I’ve never heard of before. That’s because there are over 200 tracks already available on GHTV, with Freestyle Games planning to add plenty more in regular updates.

If the channels themselves don’t take your fancy, you can also choose to play songs on demand by hitting the dedicated GHTV button on the guitars. This takes you to a new menu that contains access to the channels and the song library. 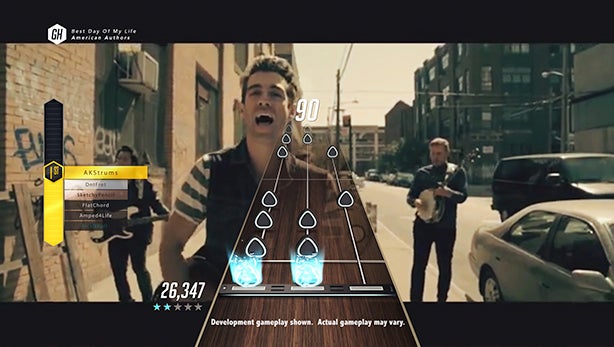 You’ll need to spend one play counter for each on-demand song you play, but even though I’ve played for many hours now, I’ve still got 20 play counters left. You get one at the start of your GHTV journey for free, and another 10 when you’ve completed the tutorial, but you’ll also pick up more as you level up. And this is simply done by playing more and more songs.

If you do run out, you’ll be able to purchase more using coins – the in-game currency you accumulate while playing songs – or you can buy a Party Pass via the Xbox Live or PSN stores. At the time of writing the store isn’t yet live, so I can’t comment on the pricing of this pass as yet.

Once you reach a certain level in GHTV, you’ll also unlock GHTV Premium, which is a selection of timed exclusive playlists that will help you level up faster, earn exclusive bonuses and more. There’s always a reason to come back to GHTV it seems.

With the combination of the revamped control system and the endless content available in GHTV, you’re on to a winner with Guitar Hero Live. Although I still feel the live-action portions are a little gimmicky, there’s enough here to thoroughly recommend Guitar Hero Live – if you can stomach the £125 asking price. As with the rest of its genre, this is also a game that’s better with friends.