Available on Xbox One and PS4 (tested)

It’s been nearly five years since I last picked up my Rock Band drumsticks and shiny plastic guitar. I was in university then and had the luxury of being able to lose days to the flowing coloured tabs and rock ballads.

But, even though I’m (technically) a proper adult now, I still felt the usual rush of glee when I unboxed Rock Band 4, set-up the drums and attached the strap to my brand new guitar.

I found it a little laborious syncing up the guitar and drums to my PS4, as you need to head to the Devices tabs within Settings > Devices > Bluetooth Devices. Hit the PS button on both devices and then the sync button (which looks like a Wi-Fi symbol) and then just wait until they appear in the list for connection. It’s a bit of a faff, but when they’re connected, you’re ready to rock. 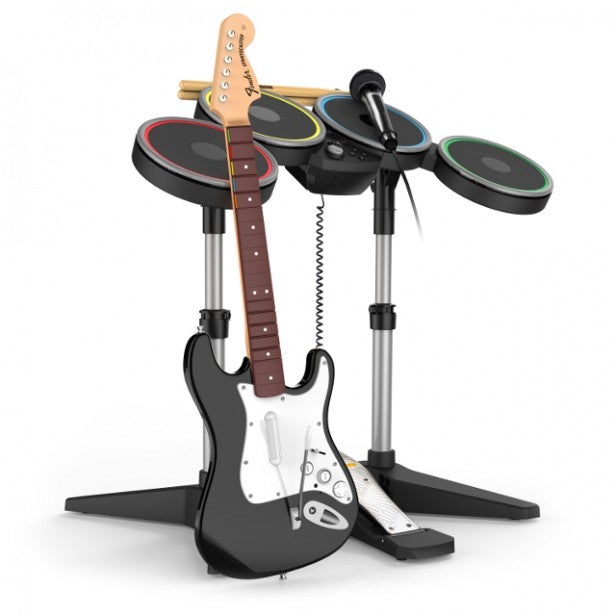 There are several ways to buy Rock Band 4, which makes it quite complicated to a consumer. If you have played any Rock Band games before, and already have the drums and guitar, you might want to opt for the software only package. That retails for £49.99 on PS4 or £69.99 for Xbox One with the “Legacy Adapter”. Although you will find the two are the same price right now on Amazon.

Then you can buy just the game and the guitar, if you want a slightly more affordable way to get in on the Rock Band action for the first time. This option costs £109.99 on both platforms.

Of course, to get the full experience you need to get the whole band together. For £219.99 on both Xbox One and PS4, you get the guitar, drums and microphone along with the game. Quite the investment for what is a very casual game.

If you opt for the full shebang, you’ll be pleased to hear that each element has been slightly revamped for the new-generation of Rock Band 4 – even if the coloured buttons and pads are still the same as before. 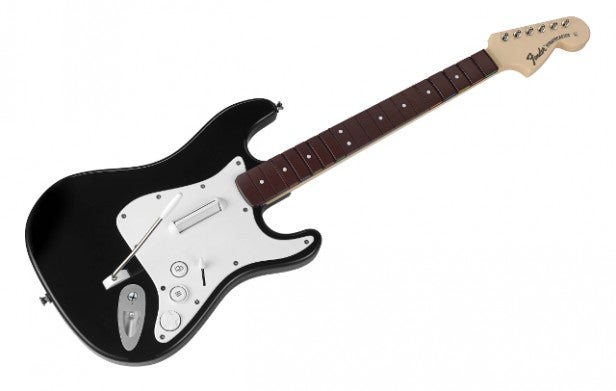 I particularly appreciated the fact that the guitar buttons have been made quieter, with a less audible click with each press. However, it’s sad that the guitar is the same black Fender Stratocaster design found in Rock Band 3, with the same glossy finish that irks my OCD when it comes to the sheer amount of fingerprints left behind.

I also found that you can easily hit the Share button while strumming. It’s something that you’ll stop doing the more you play, but it can be very irritating at the beginning as you will pause the game for the entire band and lose that critical flow.

I also had issues with connectivity, especially with the guitar. Every now and then the guitar would disconnect, or ask you to confirm which player the controller is associated with.

The drums looks very similar to their predecessors too, but the build quality has been improved with sturdier pads and a reinforced bass pedal. 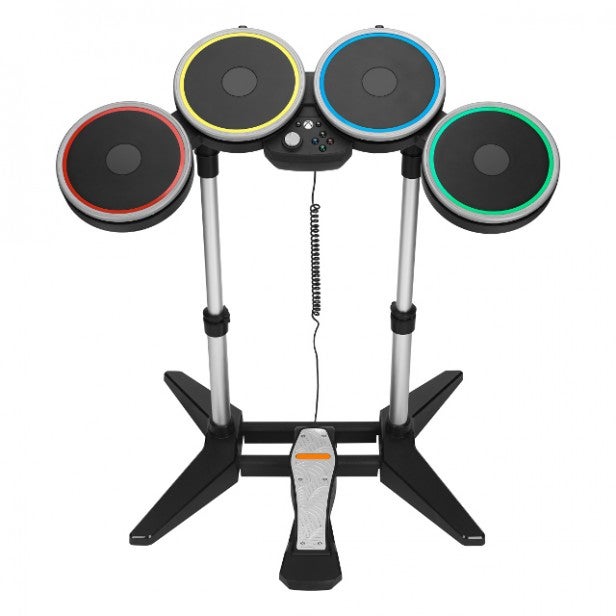 As for the microphone, it’s all very much the same here. Although, Mad Catz claims that it has a new low distortion threshold meaning you can sing louder and better. In practice, it’s not particularly noticeable though. Although the hardware tweaks are a welcome change, anyone who already has all the kit from previous generations really doesn’t need to make the upgrade. 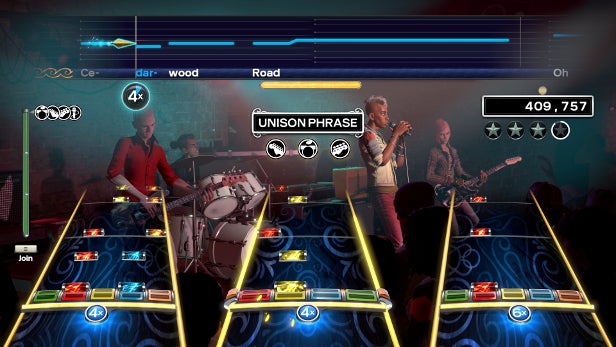 As for the gameplay, for anyone who has played Rock Band titles before, this will be familiar territory. It’s the usual five coloured button (or pad) array, with four levels of difficulty according to player skill.

Even if you’ve not played any games similar to Rock Band, it’s quick and easy to pick up. Just hit the coloured button or pad as its on-screen representative reaches the bottom of the UI. The higher the difficulty, the more notes there will be and the faster they will come at you.

So far, so Rock Band 3. But the biggest, and most enjoyable, change coming with Rock Band 4 is the Freestyle Guitar Solos.

As soon as you boot up the game for the first time, you’ll be introduced to these new solos. They enable you to have a lot more fun and be more flexible with each track, making part of it your own. The idea is that you still need to follow the on-screen prompts, but rather than stipulating the buttons you press, you only need to match the strumming pace in certain sections and the set of keys in others. Its blue borders for the higher set of five notes, while orange indicates you need to switch to the higher notes for that part of the solo. 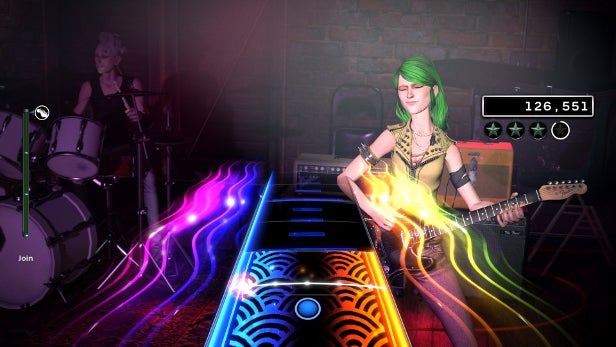 In the sections with both blue and orange borders and no strumming strokes, you can go absolutely crazy, picking your own strumming speed and note options.

Every time the solo section of a song comes up, it always arouses joy in whoever is playing at that point. It doesn’t matter whether you’re an absolute beginner or a seasoned pro, because you suddenly feel like you’re a rock star, rather than just following the coloured brick road.

What’s more, you’ll find guitar solos in every song. There are over 60 available as standard in the game, and over 1500 to download from the Rock Band music store. At the time of writing, the store isn’t yet live, so I can’t comment on pricing. 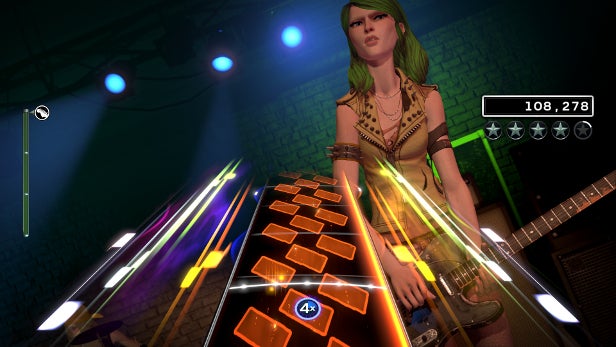 However, if you already own any Rock Band tracks from previous entries you’ll be able to download them again for free.

At higher levels on the drums, you’ll also get access to some solos, but these are far less frequent. What is new is that to unlock your star power mode there are now dynamic drum fills that make more sense in the content of each song. They can catch you off-guard though, and break your hard-earned note streak. You have been warned.

When you play together there are some additional perks – although it’s definitely a lot harder to get my flatmates together at the same time, with nothing to do nowadays. You can gain added points for completing unison sections perfectly or save other band members with your star power when they’ve failed a song for example.

Of course, there’s also the fact Rock Band 4 is a hell of a lot more fun when you’re playing it with other people, rather than strumming away on a plastic guitar on your tod or playing fake drums on a Sunday morning in your squirrel onesie.

See also: Xbox One HDD – How to upgrade your Xbox One storage 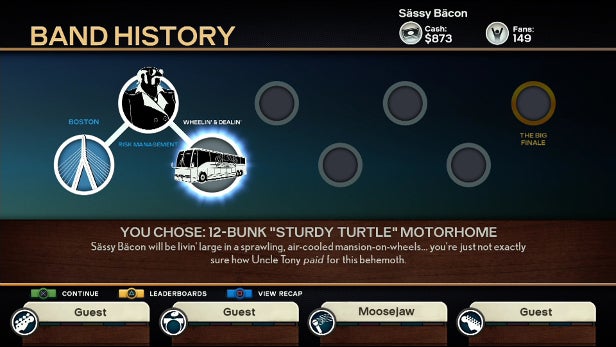 Another new feature of Rock Band 4 is the fact that the World Tour Mode, or the game’s campaign, has been revamped. The choices you make on tour, such as opting for a publicist to gain fans or choosing to couch-surf for the more personal approach, will affect the ending you get at the close of your Tour.

Each individual choice will also gain you various perks, whether that’s unique outfits or new in-game instruments. The choices can also make for some hilarious events, which I’ll leave you to discover.

It wouldn’t be Rock Band without an extensive character creation either, with the option to customise the whole band this time – including the stand-ins for your hard working flatmates/family. 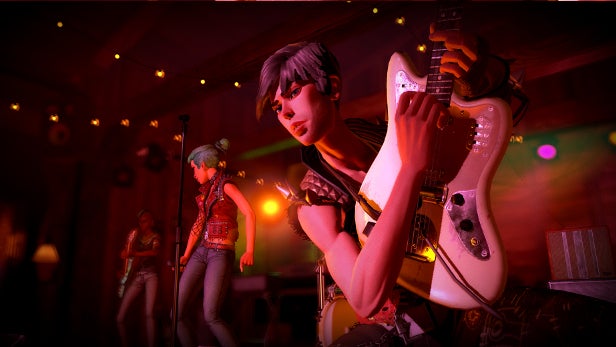 There’s also a better way to play shows, with the choice whether to play another song, whether to listen to the crowd requests or play an encore and other choices. You can vote on every option as a band, meaning it’s quicker to jump into another song without having to go back to the song library.

I don’t like the fact that all the songs aren’t accessible from the outset. Instead, you’ll have to play through the World Tour Mode to unlock all the tracks, which can be fairly laborious if you just want to dip into Rock Band 4 of an evening.

I’m just not sure they’re enough to completely revive the series after five years of dormancy. Especially with a £200 plus price tag for the complete experience and Guitar Hero Live hot on its heels.