Being a vanilla Android tablet, the Nexus 10 only comes with Google’s own Chrome browser preinstalled, although you can of course download any of the two dozen or so alternatives from the Google Play store. Chrome is pretty slick to use and impressively fast to load web pages too. Indeed, comparing the Nexus 10 side by side with the Transformer Prime, web pages load much, much faster – though to be fair that could well be due to the Prime’s widely documented deficiencies with regards to Wi-Fi and web browsing as much as the Nexus 10’s blazing speed! 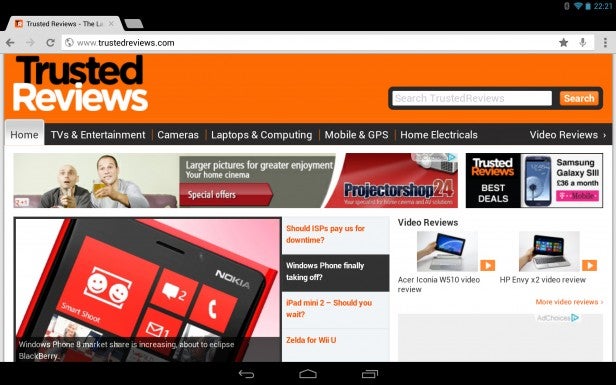 Once you’ve got a web page open, the usual pinch-to-zoom gestures can be applied and work well with pages scrolling quite smoothly, with only the merest hint of stutter when moving around a fully enlarged page. One feature of Chrome that we rather like is that when trying to tap on a specific link within a cluster of options, the browser automatically opens up a magnified window so as to make it easier to select the right one. Likewise, long-pressing on a link gives you the option to open it in another tab, or to copy/save the link address. Should you want to go incognito, then there’s an option for this too, once activated Chrome won’t store cookies or any other data from the pages you visit in your browser cache. 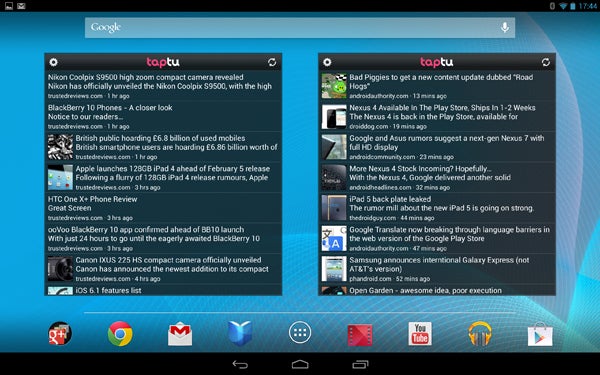 One area where Android has a big advantage over iOS is that it lets you place ‘widgets’ like these news readers on your home screens, saving you the trouble of having to open the app itself up.

So far, so good. However Chrome isn’t by any means perfect, and while it is possible to import your Chrome bookmarks from your desktop PC to your Nexus 10, the process can be a bit tricky the first time you try and do it. Go here for a full tutorial on how it’s done. There’s no Flash support in Chrome either, and the latest (indeed final) version of Flash isn’t preinstalled on the Nexus 10 either. It’s not a huge problem though as it’s possible to side-load the final 10.1 build directly from Adobe’s website (remember to check the Unknown Sources box in the Security settings first) and then install a Flash-compatible browser from the Google Play Store – Firefox and Opera being two that support it.

Whereas early Android tablets used to come in for a fair bit of stick for both the quantity and quality of apps available to them, the situation has changed quite markedly for the better in the past twelve months or so. Yes, it’s certainly true that the iPad has many more tablet-optimised apps, and for those that primarily intend to use their tablet as a gaming console then the iPad offers many more games than Android does. However with the launch of the revamped Google Play store in the spring of 2012, Android tablet users now not only have an increasingly large and varied selection of apps to choose from, they also have a much more user-friendly place to go and find them. 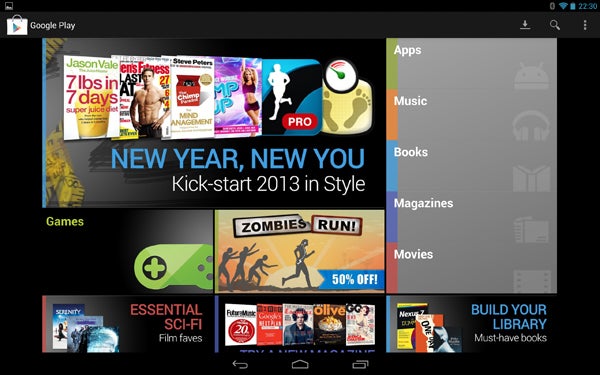 The Google Play store had a much needed facelift last year, and is much better stocked now too.

Whether you’re looking for a sophisticated newsreader app or a high definition calendar widget to decorate your home screen with, chances are you’ll find what you want in the Google Play store. In addition to apps, Google Play also offers a very well stocked selection of movies, music, books and magazines. Should you want to, you’re also free to install apps that allow you to browse rival digital stores – for example the Amazon MP3 store, or 7Digital – but as a one-stop shop Google Play is actually pretty good, offering plenty of things to fill your Nexus 10 up with. Speaking of filling things up, it’s worth noting that the Nexus 10 is non-expandable in terms of memory, and with all the operating system files to account for you can expect to have around 27GB left over for your own use on the 32GB model. 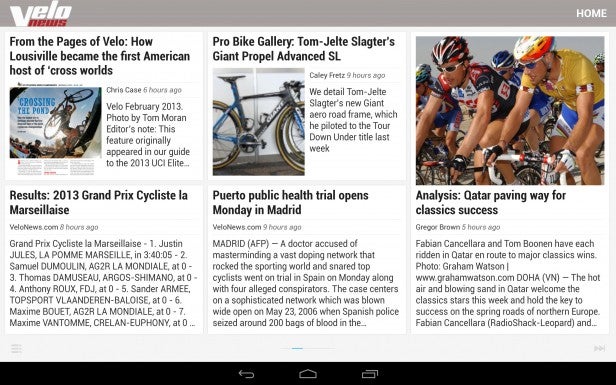 Google Currents takes web content and presents it in a magazine-like format that’s ideal for tablets.

One further thing to bear in mind that we already alluded to on Page 2 of this review is that the Nexus 10’s high resolution display can make apps that haven’t been optimised for a high-definition tablet screen look pretty ropey. This is especially true of those apps that have been designed specifically for smaller-screen Android smartphones; while the Nexus 10 is perfectly able to re-size them to fit the extra screen space, the end results are akin to something from the PlayStation One in terms of graphical quality. 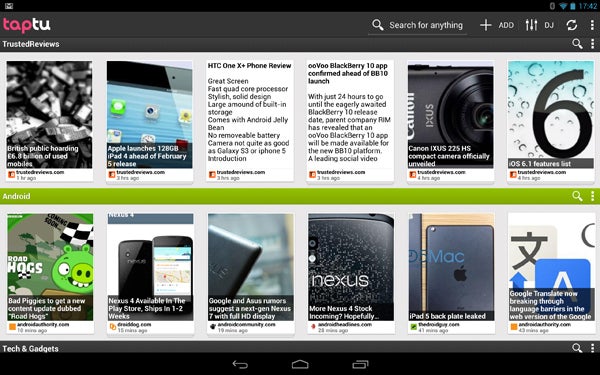 Taptu enables you to browse all the latest headlines from your favourite news sources in one place.

In terms of performance, the Nexus 10’s dual-core 1.7GHz Cortex A15 processor, Mali T-604 GPU and 2GB of RAM make light work of running apps – even graphics intensive 3D games such as Dead Trigger. One issue we did experience though, is that the back of the tablet can get quite hot along the top, just to the right of the camera/flash where the CPU/GPU is located. This only happens when running CPU/GPU intensive applications – for example the aforementioned Dead Trigger. If you’re just reading your emails or browsing web pages it’s unlikely to be an issue. Searching online we see that this does appear to be something of a known issue. Switching the tablet off or putting it to sleep cools it down pretty quickly, but really we’d prefer it not to get quite so hot in the first place. 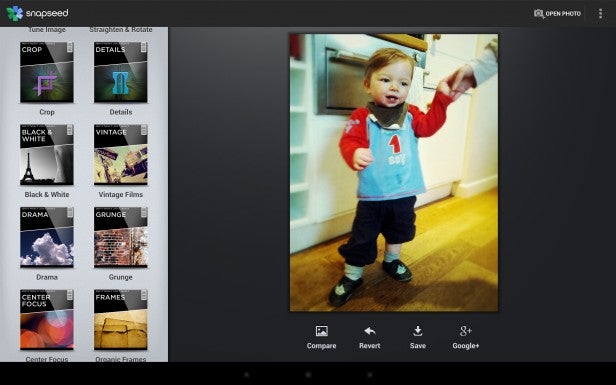 Snapseed is a great little app that allows you to spruce up your otherwise drab tablet images with. 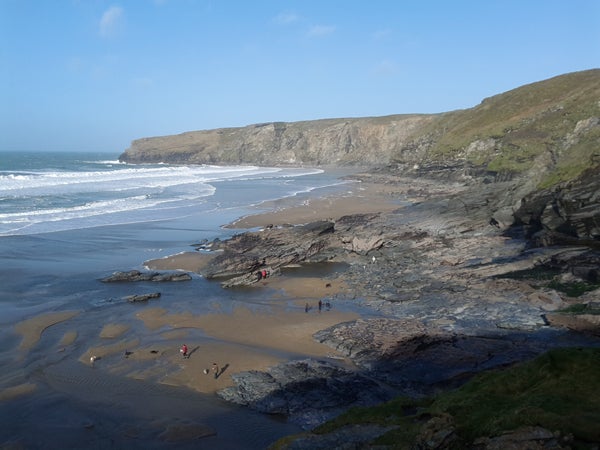 Of course, numbers can only tell you so much and the bottom line with regards to the Nexus 10’s cameras is that they’re fine for taking the odd non-critical snapshot or eBay listing image with, but can’t really match a dedicated digital camera for overall image quality. Likewise, it’s also entirely possible that the smartphone in your pocket will take just as good – if not better – a picture than the Nexus 10 will. Image quality isn’t that bad when you’re shooting at wideangle in good light, however the moment you activate the digital zoom, or when used in poor light, image quality takes a big knock in quality. Activating the Nexus 10’s digital zoom to its 4x maximum results in truly terrible image quality, so avoid this altogether if possible. 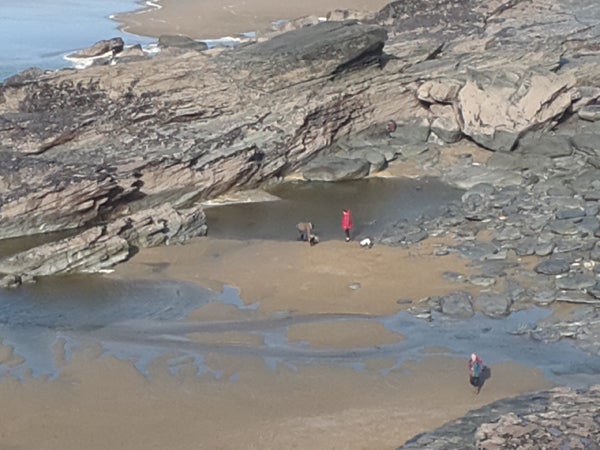 Use the digital zoom and image quality soon goes downhill. This is 2x – the max is 4x.

In terms of available features, the Nexus 10’s camera is a fairly basic affair; with the standard automatic mode supplemented by an assisted panorama stitch mode (that helps you to stitch a collage of individual images together) along with a one-touch panorama mode where you hold the shutter button while sweeping the tablet in a certain direction. There are no built-in digital effects, although of course there’s no shortage of apps available on Google Play for precisely that sort of thing. Should you want to record HD video footage then you can do this too. Keeping the tablet still produces acceptable results, however should you try and pan across a scene then the end result tends to be quite juddery – even if you move the tablet quite slowly.

The assisted stitch mode is a fun way to create ‘high-res’ panoramas, but it’s not all that accurate.

The one-touch panorama mode is easy to use and gets pretty good results.