The Nexus 10 comes with Android Jelly Bean 4.2 preinstalled (which is immediately upgradeable to 4.2.1). There’s lots that’s good about the latest version; multiple user logins, a sleek notifications system and super slick operation. Unfortunately though, Android’s traditional Achilles heel – namely, OS stability – does appear to be something of an issue again. While 99% of the time everything runs super smoothly with no problems at all, we found that our review unit had a tendency to freeze and/or perform random reboots from time to time. The pattern of these reboots appeared to be completely random; sometimes we’d experience several in a single session of use, while at other times the tablet would run absolutely fine for a full day or two. 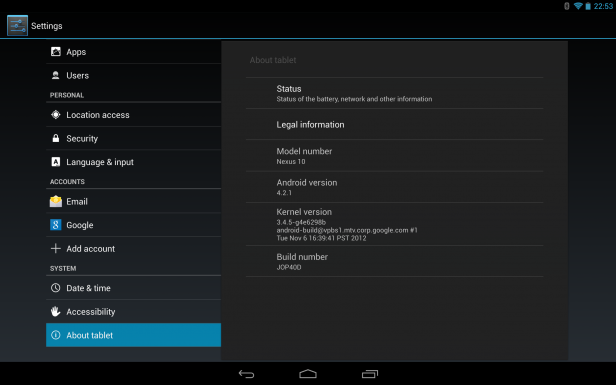 Not the most exciting screen grab we grant you, but one that shows the Android version and more.

The freezes/random reboots are frustrating to say the least, because when Jelly Bean 4.2.1 works it works really well. As a more flexible and open operating system Android offers a number of key advantages over iOS – at least for those tech-savvy users who want to make use of them. This includes (but is certainly not limited to) the ability to ascribe live news feeds, weather forecasts and other similarly helpful ‘widgets’ to your five home screens, which means you can see at a glance what iPad users have to open a specific app for – and here on a large screen widgets really do come into their own. When things go wrong though and your tablet freezes you may well find yourself pining for the reliability of Apple’s simpler, but ultimately more reliable iOS.

With regards to our Nexus 10, initially we thought that perhaps we’d just been unlucky and received a malfunctioning device, however a quick trawl of the internet quickly revealed that we’re far from the only ones to have experienced such issues with a Nexus 10 running Jelly Bean 4.2.1. Indeed, freezes/random reboots appear to be a fairly widely reported problem with the latest Android build. We should, of course, point out that the root of the problem appears to be software related, rather than something that’s caused by any substandard or faulty hardware in the Nexus 10 itself. In this case it’s to be hoped that Google is working on a patch that will sort the problem of random reboots out once and for all. 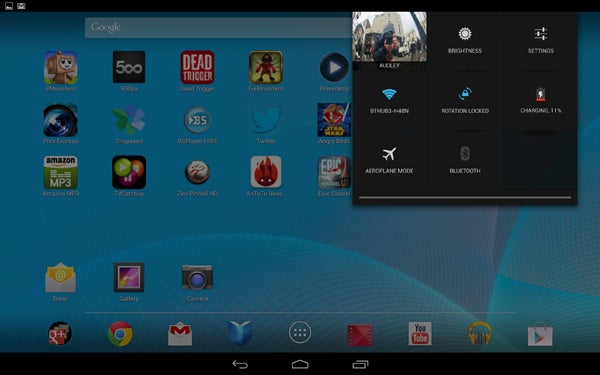 The Quick Menu can be accessed by swiping down from the top right-hand edge of the screen.

The good news in this respect is that, being a vanilla Android device (that is to say, one that’s not skinned with any kind of third-party user interface), the Nexus 10 is able to receive system updates as soon as they become available. While this is undoubtedly a good thing for those eager to keep up with latest Android build, it does mean that purchasers of the Nexus 10 won’t find any extra apps preinstalled on their devices beyond the standard Google spread. That said, it’s not a bad collection of apps, and you’ll find everything you need from email clients, to calendars and calculators to get started with.

As with Ice Cream Sandwich (ICS) before it you get three dedicated soft buttons – the Back button, the Home-screen button and the Multitasking button. While these three buttons were found on the bottom left-hand-side of the screen in ICS, Jelly Bean relocates them to the middle of the baseline. It certainly looks a bit neater, although any ICS users who’ve grown used to using their left thumb to do the lion’s share of soft button pressing will find that the new layout requires you to take a hand off the tablet to reach any of them. 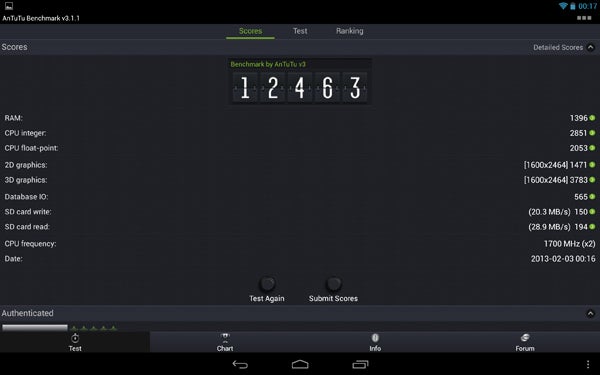 When it’s not misbehaving the Nexus 10 scores quite highly on benchmark tests such as AnTuTu.

In addition to relocating the soft buttons there are a number of practical enhancements that Jelly Bean enjoys over its predecessor. Chief among these is the ability to run multiple user accounts on one tablet. Once you’ve set everything up (via the Users option in the Settings menu) you simply choose your identity from the lock screen, enter your passcode – assuming you’ve applied one – and the tablet will automatically take you to your home screen complete with all your own apps and accounts. If you’re looking for a tablet that all the family can share, then the Nexus 10 ticks all the boxes in this respect.

Another big difference between Jelly Bean and ICS is the application of ‘Project Butter’ – so-called because it aims to make the user experience that much smoother. Putting the aforementioned freezing/rebooting issues to one side for a moment, it’s certainly the case that Jelly Bean 4.2.1 feels just that a little bit slicker and faster than ICS did. For a start, there’s no stuttering or lag when switching between homepages or tasks, or when running multiple applications – with its dual-core 1.7GHz ARM Cortex A15 processor and 2GB of RAM the Nexus 10 makes light work of pretty much anything you care to throw at it. In addition to an overall speed boost, animations and transitions seem a bit smoother too. Like we said already, when Jelly Bean 4.2.1 works it works very well indeed. 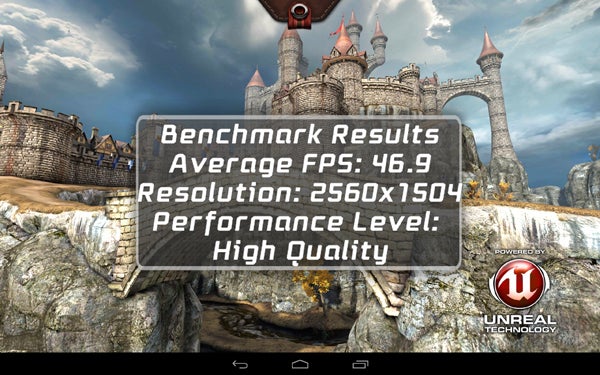 There’s also a new notifications system, which is found on the top left of the screen and activated by swiping down from that point of the screen. This provides live notifications of everything from new emails to pending app updates, and is really useful as it allows you to jump directly to your inbox or to whatever app needs updating. In addition, if you’ve just downloaded something – say, for example an image or an MP3 file – you can use the notifications bar to quickly find it and open it. Over on the top left-hand-side of the screen, meanwhile, you’ll find the pull-down Quick Menu, which is also activated via a vertical swipe. Here you can easily manage a number of regular settings, from screen brightness to Wi-Fi settings via Bluetooth and the screen rotation-lock. 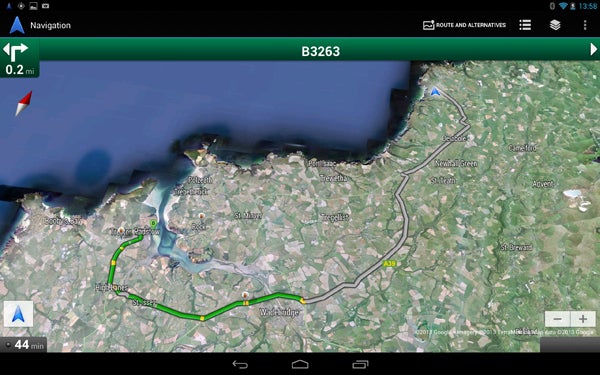 The Nexus 10 has built-in GPS, which allows the Navigation app to guide you to your destination.

Last but by no means least is the addition of Google Now. This can be accessed directly by swiping up from the task bar at the bottom of the screen and, once activated, works on a couple of levels. On the one hand, you can set it to provide live updates and notifications of things that are important to you, be it the state of the traffic on your daily commute or the next match of your favourite football team. These are presented as ‘cards’ on the screen, with all the relevant information succinctly presented within. 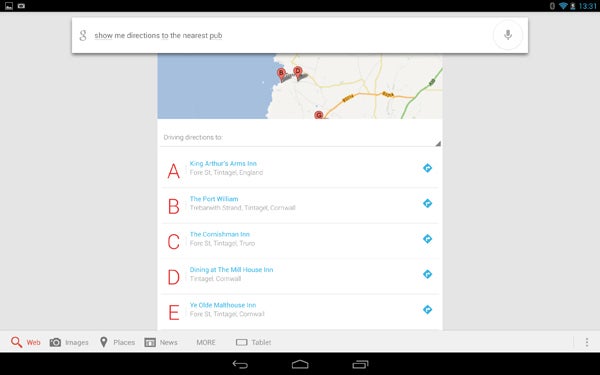 Google Now employs some excellent voice recognition technology and has all sorts of handy uses.

In addition to the cards function, Google Now also offers a text and spoken-word search facility, along with a Siri-like voice command function that gives you a degree of control over the tablet itself. Much like it’s Apple rival this latter feature can be used to open core apps, set alarms, make adjustments to your calendar and even operate the calculator – you’ll have to spend some time talking to your Nexus 10 in order to find out exactly what Google Now is and isn’t capable of doing, but overall it’s undoubtedly pretty smart. The voice recognition technology is particularly impressive, and even when asking deliberately quirky questions we found the supplied results to be consistently accurate.