Of course, with such a gorgeous display at its disposal, the burning question for many potential Nexus 10 owners will be how well the tablet handles HD movie playback. The straightforward answer to this is that it’s about as good as it currently gets. Not only does the Nexus 10’s 16:10 screen lend itself particularly well to HD content, it also fizzes with detail, clarity and pop. Colours are bright and lifelike but without being overly saturated, while accurate white balance produces accurate skin tones and neutral whites. Tonality is good too, with the display delivering deep blacks and contrast. 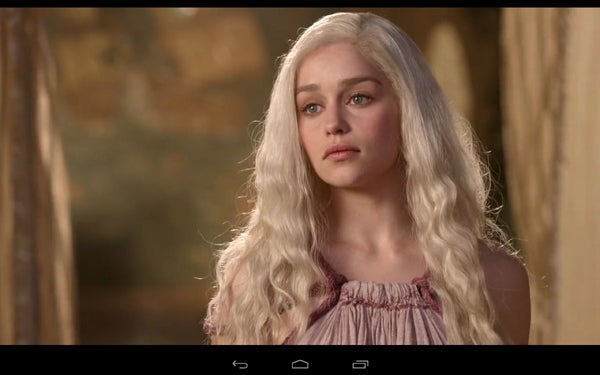 In addition to being super-sharp, the Nexus 10 produces excellent skin tones.

In terms of what file types it can handle, there’s definitely some room for improvement on the Nexus 10’s built-in video player, although this is hardly an issue given the number of free players available through Google Play. While the stock video player had no problems with any of the standard definition file types we threw at it (MP4, AVI, WMV, H.264) it struggled with high-definition .MKV files, stuttering horribly though footage encoded at 720p.

With this in mind, you’ll almost certainly want to experiment with some of the third-party media players available through the Google Play store. Testing playback of our 720p .MKV files we found that the free version of BSPlayer handled it absolutely fine (even at 720p, it looked stunning), while the free MXPlayer yielded yet more stuttering and chop. 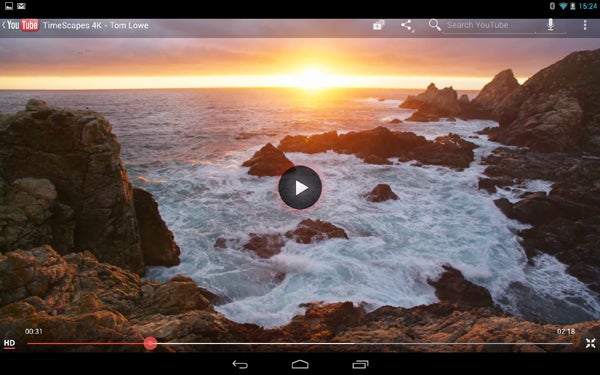 This 4K TimeScapes movie looks absolutely stunning when viewed in HD on YouTube.

Should you want to use the Nexus 10 to edit your own movies with then you’ll find the tablet offers a Movie Studio app that’s designed specifically for this. It’s fairly basic mind, so if you want to get more creative beyond sticking bits of footage together and adding transition effects you’ll need to dip your toe into Google Play for something a bit more advanced.

Audio playback is handled well, with the stock Play Music app able to deal with a wide range of audio file formats including MP3, Flac, WAV and WMV among others. Presentation isn’t bad either, with Play Music proving easy enough to use and navigate although options to shape your sound to your own preferences are a bit limited. With this in mind, if you plan on loading your Nexus 10 up with lots of music and using it to stream music around your home hi-fi via Bluetooth (as I personally do with my Transformer Prime) then the Poweramp app ($3.99) is by far the best tool for the job, with advanced tone controls, an eleven-band graphic equaliser and gorgeous presentation. 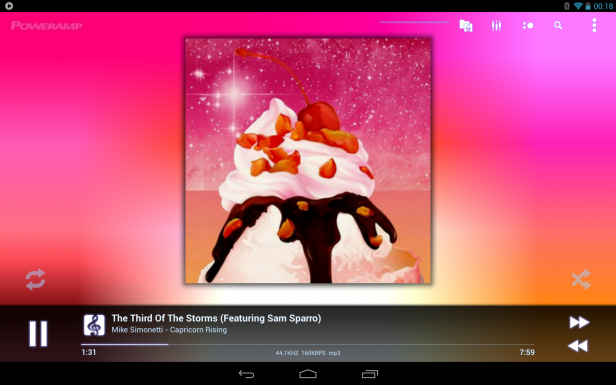 The stock Play Music music player is ok, but the paid-for Poweramp app is still the one to beat.

Plugging a set of decent headphones into the 3.5mm jack that’s located on the left-hand side of the tablet) yields good results too, with very good clarity and no audible hiss in quieter passages of music. One further area where the Nexus 10 excels – at least in comparison to other tablets on the market – is with its built-in, front-facing speakers. While the sound generated by these is hardly likely to excite serious audio enthusiasts, it’s far better (i.e louder and clearer) than any other tablet, generating a good quality stereo sound that’s surprisingly effective when you’re holding the tablet at arm’s length.

Connectivity options on the Nexus 10 are limited to a micro USB on the left-hand side of the tablet just above the headphone jack, and a micro HDMI jack on the right hand-side. On the bottom of the tablet there’s a six-pin magnetic connector that’s expected to eventually offer docking and charging capabilities, although as yet nothing concrete has been released to fit it.

Unlike tablets in the Asus Transformer range, there’s no full-size USB, Micro SD or SD card connectivity, which is a bit of a disappointment. That said, with the Nexus 10 being an Android device, getting files on and off the tablet is actually a fairly straightforward process. Better still, you’re not forced to use iTunes either. Simply plug the Nexus 10 into your desktop computer using the supplied USB cable and once your desktop has recognised it you’ll be able to access it as you would a portable hard-drive to drag and drop whatever files you want to transfer. (Note: Mac users will need to install the free Android File Transfer app from Android.com on their desktop before they can do this.) Desktop transfer speeds via USB are actually quite nippy; we timed the transfer of a 400MB movie file at less than 30 seconds, while 1GB of music took less than a minute. 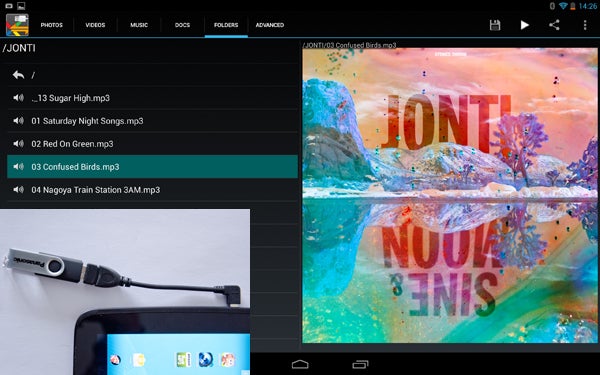 Using a cheap micro USB to USB connector (inset) and the
Nexus Media Importer app allows you connect to external USB devices and
transfer files. You can even preview the contents.

Should you have files stored on a USB memory stick or SD card that you want to transfer directly to your Nexus 10 without the intervention of a desktop PC, the good news is that this is possible too. You’ll need two additional items to do it though, at a total cost of around £5. The first of these items is a ‘male micro USB to female USB’ connector – Amazon sells them for around a couple of quid. In addition, you’ll also need the Nexus Media Importer app ($2.99) from Google Play. Once you have both simply plug your USB memory stick/SD card reader into the female end of the connector and the male end into your Nexus 10. Then open up the NMI app and transfer away.

If you’d prefer to transfer files wirelessly then the Nexus 10 comes with built-in Bluetooth – you’ll find Bluetooth controls in the Quick Menu that can be pulled down from the top-right of the Nexus 10’s screen. In addition, Google has also seen fit to integrate Near Field Communication technology into the Nexus 10. In theory this allows you to share files between two NFC-enabled devices simply by tapping them together. In addition, the technology can also be used to make micro payments with. While NFC is certainly gathering pace, it’s still very much in its infancy in terms of take-up and we have to admit that we were unable to test its effectiveness during the course of this review. 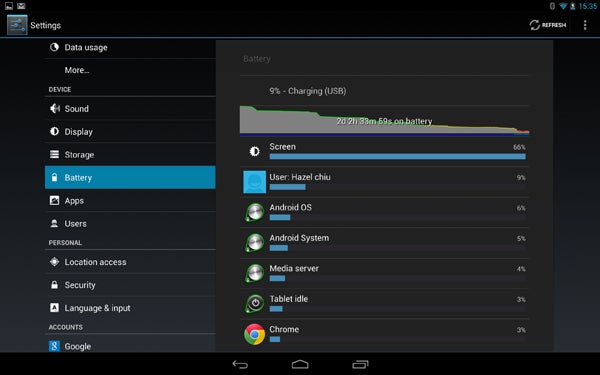 Battery life is really impressive. We managed to get over two days out of our review unit and still had a tiny bit of power to spare.

The Nexus 10 is powered by a non-removable 9000mAh Lithium polymer battery. During our time testing the tablet we found that it offers excellent performance. Indeed, in between testing various apps, capturing screen grabs, watching HD movie content, loading and re-loading dozens (if not hundreds) of websites, playing games, using the camera and all other manner of applications we were easily able to get a full day’s use of the tablet on a single charge. Given the power that’s required to light up all those pixels on the Nexus 10’s high-resolution screen this is really quite an achievement on Samsung/Google’s behalf. There are, of course, various ways and means to prolong battery life, such as switching the GPS off, however we’re confident that the majority of users will find that the Nexus 10 offers excellent battery life as is. 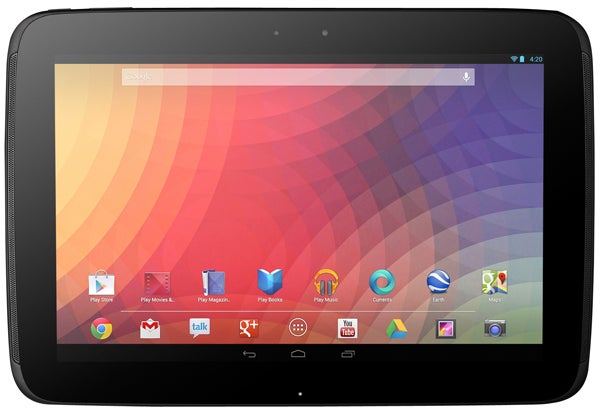 There’s no doubting that the Nexus 10 is currently one of the very best tablets on the market. Its gorgeous screen, super-smooth operation and wealth of features combine to produce a tablet that, at last, fully showcases what the Android platform is capable of when applied to tablets. With the improvements to Google Play and the growing number of high quality Android-specific apps finding great applications to run on the Nexus 10 is no longer the issue that it once was either.

And so to the burning question: is the Nexus 10 as good as the iPad 4? In our opinion it most certainly is. Indeed, in many ways, it’s even better. While the freezing/random reboot issue currently affecting some Jelly Bean 4.2.1 users does admittedly take a little bit of the gloss off what is otherwise a super-slick and richly featured operating system, we fully expect Google to sort the issue out with a forthcoming software update. In the meantime, the Nexus 10 remains a fantastic tablet to interact with and to consume digital media on. Indeed, it could even be argued that Apple has quite a bit of catching up to do.