The Gigabyte is a tad more expensive than rivals at the affordable end of the market, but it justifies its cost with better features in almost every department alongside faster, more consistent performance in applications and games. A superb option for the majority of affordable and mainstream builds.

What is the Gigabyte Z390 Aorus Pro?

The Gigabyte Z390 Aorus Pro is the most expensive of the four more affordable boards in this Z390 group test, but there are small margins at place here – its £173 price makes it only seven pounds more expensive than the ASRock Z390 Extreme4 and twelve pounds more than the Asus TUF Z390-PLUS Gaming, but not quite as cheap as the £140 MSI MAG Z390 Tomahawk.

The Z390 Aorus Pro goes some way to justifying its cost with excellent aesthetic design.

The rear IO cover, the heatsink at the top of the board and the southbridge heatsink have brushed metal and dramatic angles, and you get more RGB LEDs on this board than in any of its affordable rivals – they’re in the two major heatsinks, the audio circuitry and between the memory slots.

Gigabyte’s board looks good, and it ticks more specification boxes than most of its slightly cheaper rivals.

It has three PCI-E x16 slots, with one at full speed, a second capable of 8x speed and a third at 4x speed alongside three PCI-E x1 slots. The Gigabyte also supports dual-graphics systems from AMD and Nvidia. That’s the same situation as the ASRock, and a better PCI bill of health than the Asus and MSI boards.

This is the only board in the cheaper group to offer steel strengthening on both its PCI and its memory slots, and the Gigabyte supports 128GB of DDR4 memory – twice as much as the ASRock. 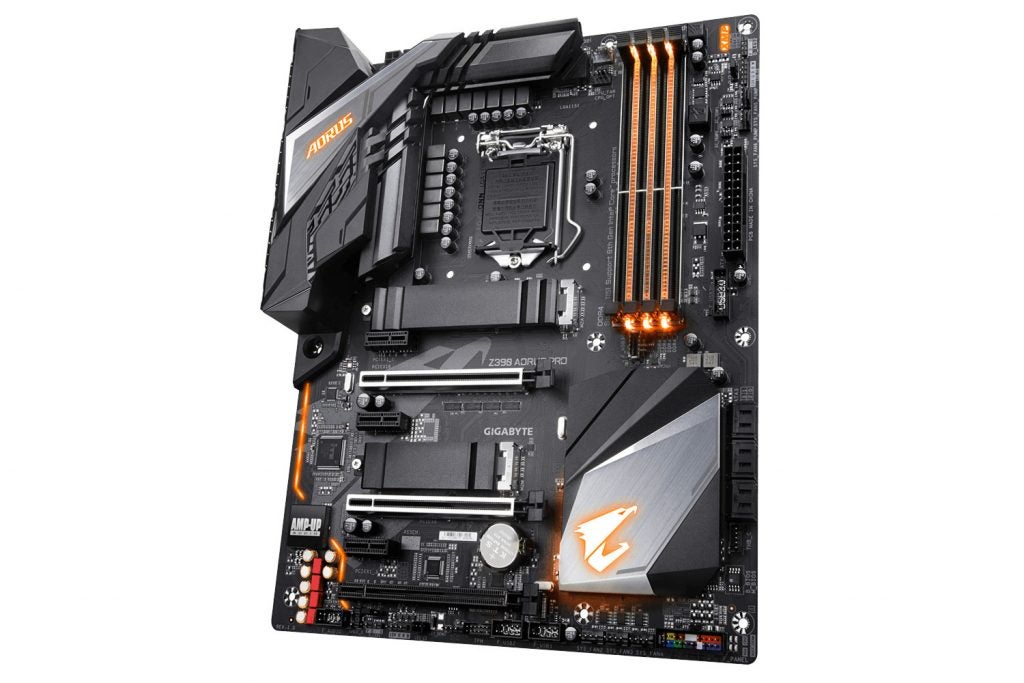 You get two M.2 slots, and both of them have heatsinks – something that few rivals offer. The Gigabyte has the usual six SATA ports, and at the top you have an extra four-pin CPU power connector – just like the ASRock and MSI boards. That’s a boon if you want to pump extra electricity into the CPU for some overclocking.

There’s normal Gigabit Ethernet, and audio comes from the Realtek ALC1220 chipset – a mainstream chip, sure, but a little better than the audio kit you’ll find in the MSI and Asus boards.

You don’t get a third M.2 slot on this board for a wireless card, but that’s one of the only major features that’s missing here but is found on rivals.

Six fan headers are scattered around the board, and they’re all four-pin connectors with PWM. There are four lighting strip headers, too. You get two on-board USB 2 headers and a USB 3.1 Type-C connector for attaching to a case’s front panel.

You only get one on-board USB 3.1 connector, but that still supports two USB 3.1 ports on the front of a case – and so it will be fully compatible with the vast majority of enclosures.

The rear IO has five full-size USB 3.1 ports. Two of those support the faster Gen 2 protocol, while ASRock’s board only has one full-size port that uses Gen 2. You get a USB 3.1 Type-C port, five audio jacks and four USB 2 ports – so, if you want USB connectivity, this board has everything else beaten.

The Gigabyte’s rear IO doesn’t offer DisplayPort, though – just HDMI. It doesn’t have a PS/2 connector either. 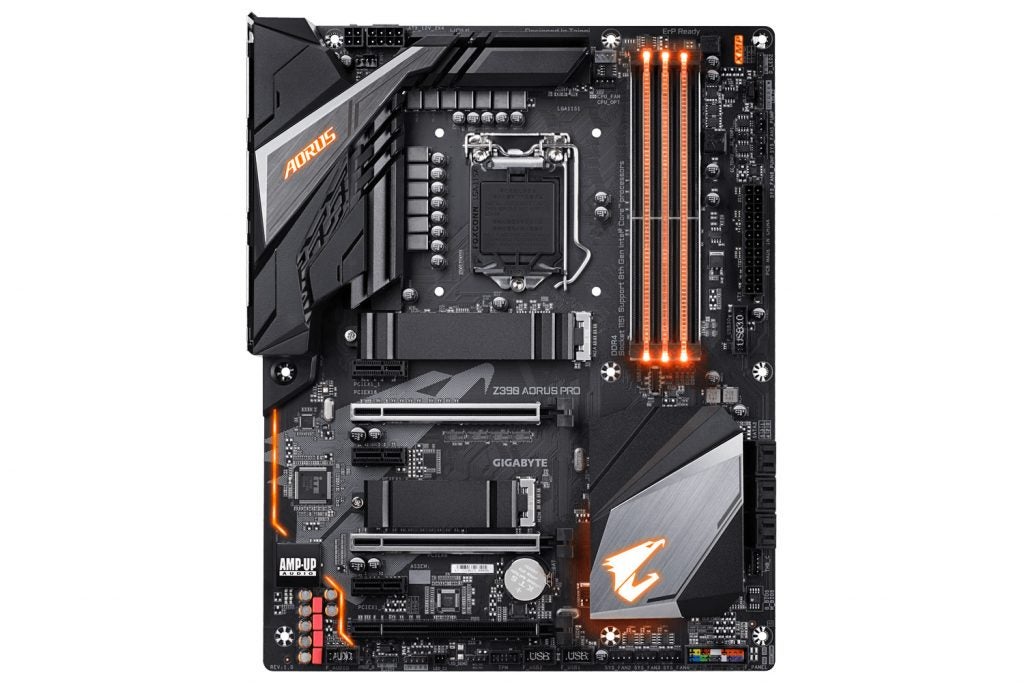 The Gigabyte has an excellent specification considering its price – and it has excellent performance, too.

In Cinebench’s single- and multi-core tests the Gigabyte’s scores of 210cb and 1506cb are better than all of its affordable rivals. Its Geekbench results of 6032 and 28904, similarly, almost always beat this board’s key competition.

These scores don’t often compete with the more expensive boards in the wider group, but they’re not far short – and better than anything else at this price.

The Gigabyte bolstered its application performance with decent performance in storage and memory tests. While not class-leading here, it was never bad, and it was usually more consistent than the other boards at this end of the market.

It’s great when gaming, too. Its 3D Mark Time Spy and Fire Strike scores of 7681 and 17847 are both better than any other budget boards can manage. It was able to compete with pricier boards in Shadow of the Tomb Raider – and in Middle Earth: Shadow of Mordor it was actually the best performer in the entire test.

Should I Buy the Gigabyte Z390 Aorus Pro?

The Gigabyte Z390 Aorus Pro is a few pounds more expensive than its rivals at the affordable end of the market – but it more than justifies the cost in several areas.

It’s got a solid specification, with ample PCI versatility, good on-board ports and a versatile rear IO. It looks great, with more RGB LEDs and eye-catching design than rivals.

Other boards have more SATA ports or a third M.2 connector for wireless, but those are minor issues that won’t affect many people. When it comes to mainstream features, the Gigabyte has everything covered.

It’s a better performer than its rivals, too – routinely faster in applications, much quicker in games, and more consistent in every test.

This board does cost a little more, but it’s definitely worth it. If you do want to save some pennies then the ASRock is better for work and the MSI is better for gaming – but the Gigabyte is the best affordable all-rounder by some distance.