The Asus TUF Z390-Plus Gaming has good durability and a solid basic specification, but rivals that don’t cost much more tend to offer just as much here – and, in some cases, better connectivity and on-board slots and sockets.

What is the Asus TUF Z390-PLUS Gaming?

Asus’ TUF-branded components are designed for extra durability – and they’re also put together with entry-level builders in mind, which means features that should support easy construction and compatibility with other components.

What does that mean in practice, though, and does this board justify its £161 price in a market packed with rivals that don’t cost much more?

The TUF Z390-PLUS Gaming certainly looks like a board that’s been built for durability. The southbridge heatsink and pre-installed rear IO cover are made from dark grey metal and have yellow accents, and those yellow accents continue across the black PCB. It almost looks like the board is made from survival gear, or that it’s wearing hi-vis.

Get beyond the eye-catching looks and you do get several features that improve this affordable board’s durability.

Many of the tiny components that make up the board, like the chokes, VRMs and capacitors, are designed to have up to five times the lifespan that you’d find in similar parts on other affordable motherboards. You get extra chips to guard against electrostatic discharge, and the DRM has over-voltage protection.

The main PCI slot is bolstered with steel on both sides, and that pre-installed rear IO cover does a good job of protecting ports – some motherboards at this price won’t have an extra like that. 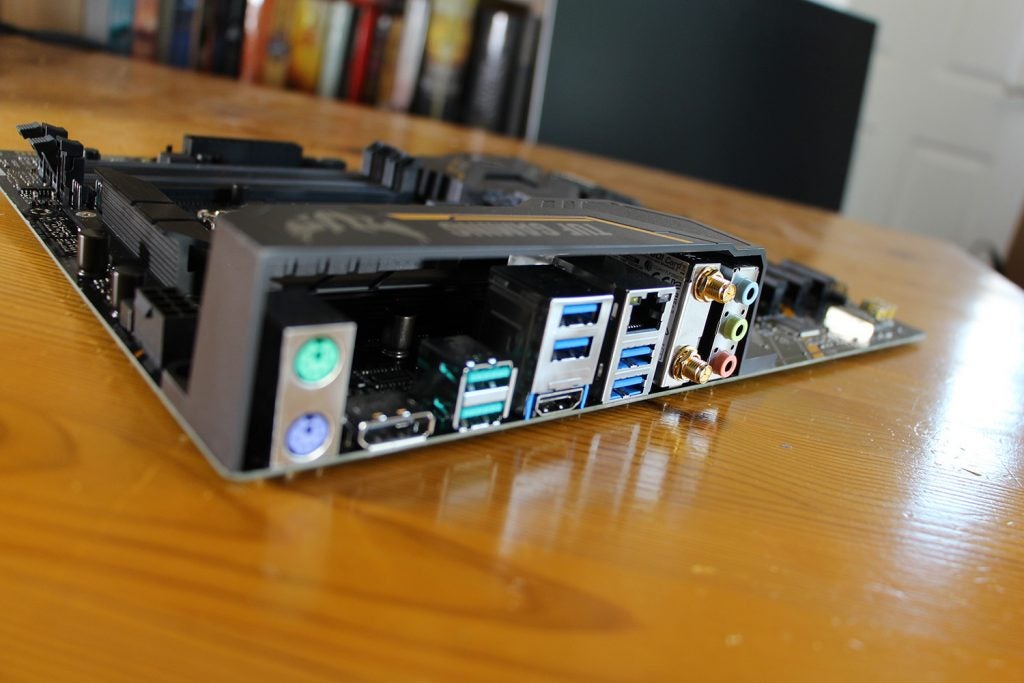 These are welcome features on any motherboard, of course, but they do come with some caveats. Many people who are putting together entry-level builds just won’t push their rigs far enough to need this extra durability – and it’s worth remembering that a lot of boards at this price also have some of these features. They just don’t necessarily have all of them at once – or the all-important Asus TUF branding.

The £167 ASRock Z390 Extreme4 has steel on both PCI-E x16 slots, for instance, alongside beefed-up chokes and capacitors. The £173 Gigabyte Z390 Aorus Pro has steel on its PCI and memory slots, and the £140 MSI MAG Z390 Tomahawk also has steel on its main PCI slot.

It’s a similar story when it comes to the features that are supposed to make this board easier for building.

The Asus serves up plenty of temperature sensors across the PCB, and five fan headers – including one designed for water-cooling units. They’re all four-pin connectors with PWM support.

That’s not unusual at this price, though. All three similarly-priced rivals have water-cooling ports and similar fan arrangements – while some have even more fan connectivity.

The Asus could also have more to help first-time builders. I’ve seen plenty of boards with colour-coded on-board headers to help people match everything up.

Regardless, it does have a good slate of entry-level features. The top, steel-support PCI-E x16 slot is joined by four PCI-E x1 sockets and four memory slots – with the latter accepting up to 64GB of memory. 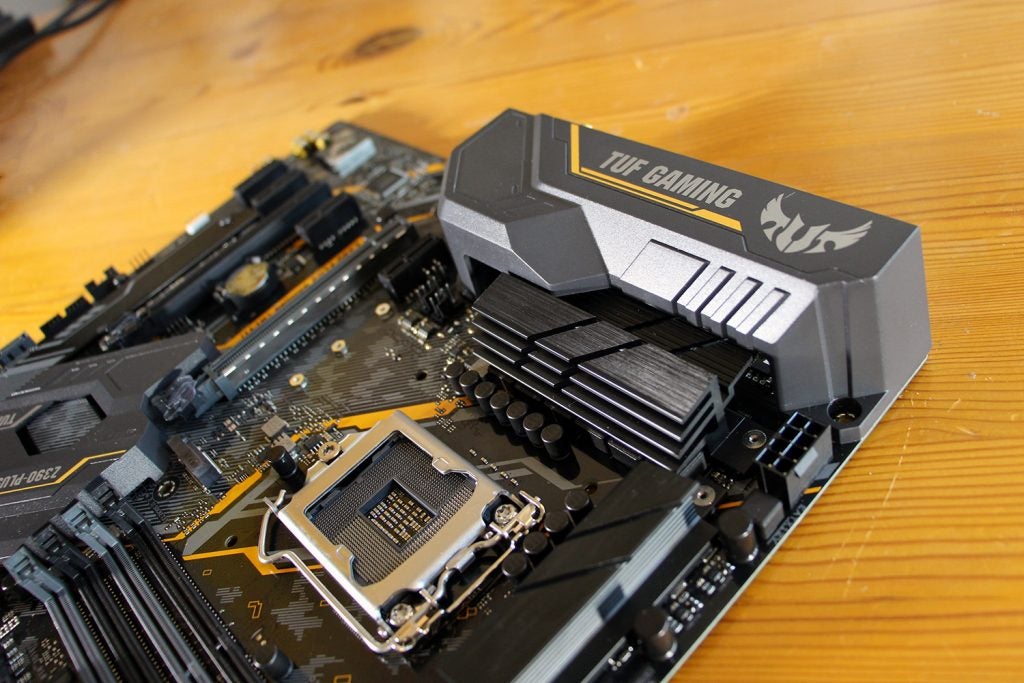 You get two M.2 sockets, both of which run at full speed, and one is protected by a heatsink. There are six SATA connectors, and there are two on-board USB 3.1 headers and two on-board USB 2.0 headers.

At the rear, you get four USB 3.1 ports that use the slower Gen 1 protocol, and two more than use the faster Gen 2 specification. There are two PS/2 connectors, but only three audio jacks and no USB 3.1 Type-C. The ASRock, Gigabyte Aorus and MSI boards all do have Type-C, and they all have five audio jacks.

This £161 version of the Asus also includes dual-channel 802.11ac wireless. It’s possible to save some cash and opt for the £140 wireless-free version instead.

There’s a second PCI-E x16 slot, although it’s restricted to 4x speed, which restricts dual graphics – and the board doesn’t support Nvidia SLI, only the less useful AMD CrossFire.

Costs are cut further by only including mid-range Realtek ALC S1200A audio and normal Intel Gigabit Ethernet. You don’t get much in the way of lighting, either: there are some RGB LEDs down the right-hand side of the board, but that’s it.

The ASRock and Gigabyte Aorus boards are better here: the former supports dual-graphics from Nvidia and AMD, and it has more PCI slots with more bandwidth. The Aorus board only supports AMD CrossFire, but it does have more versatility when it comes to PCI slots.

Indeed, that situation is typical of the TUF Z390-PLUS Gaming as a whole. The Asus board does have good durability and a good set of entry-level features, but other boards at this sort of price tend to have better USB connectivity and more PCI options. Depending on what kind of machine you want to build, another motherboard will probably offer a better slate of practical features in a key department or two. 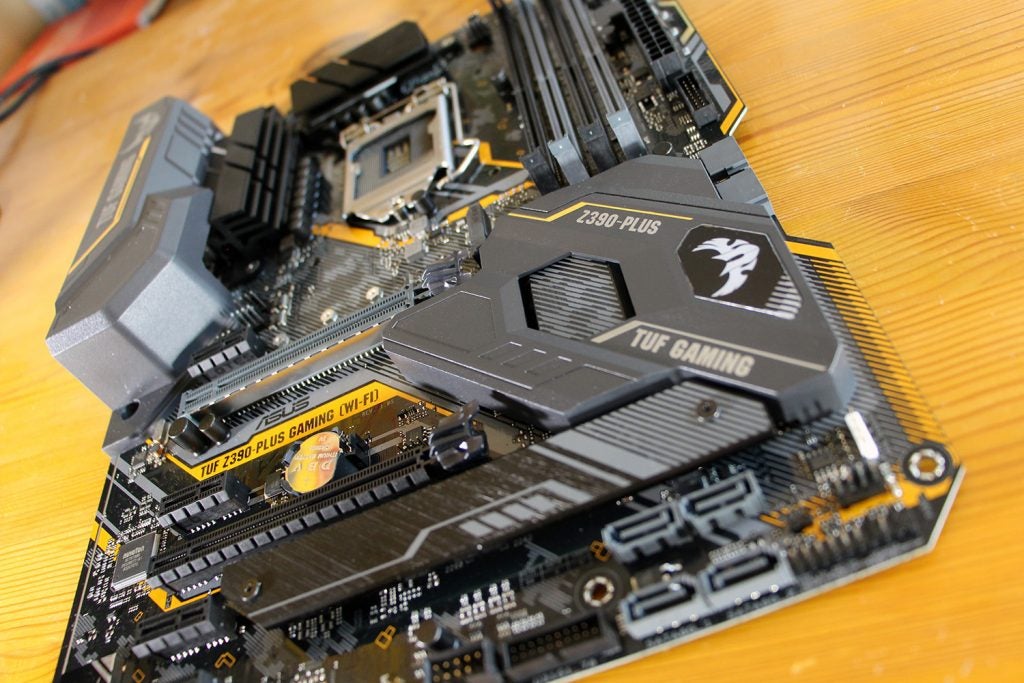 The Asus board didn’t prove particularly impressive in benchmarks, either.

Its trio of Cinebench scores saw it barely squeeze past the MSI MAG Z390 Tomahawk – the cheapest and weakest board in the test in applications. It scored 1,478cb in the Cinebench multi-tasking test, for instance – two points behind the MSI MAG, but behind the 1,506cb scored by the Gigabyte Z390 Aorus Pro.

The Asus scored 205cb in the Cinebench single-core test – a couple of points beyond all of its rivals.

In Geekbench the TUF board returned single and multi-core scores of 5913 and 28,387. The former score was actually a little better than all of the other boards I’ve mentioned in this review, while its multi-core result was around 250 points behind the MSI MAG and further behind its other rivals.

The Asus TUF board was the poorest in the group in the Sandra Processor Arithmetic benchmark.

The TUF returned excellent single-threaded memory bandwidth results, and its NVMe and SATA read and write speeds were fine. It was also the most frugal board in the entire group at load.

So, where does that leave the Asus when it comes to performance? It’s generally a little better than its more affordable rivals in test that prioritise single-core performance, but it quickly falls behind in most complex, multi-threaded tasks – even when compared to the cheaper MSI MAG board. It’s solid with storage and memory performance, but isn’t great in gaming. 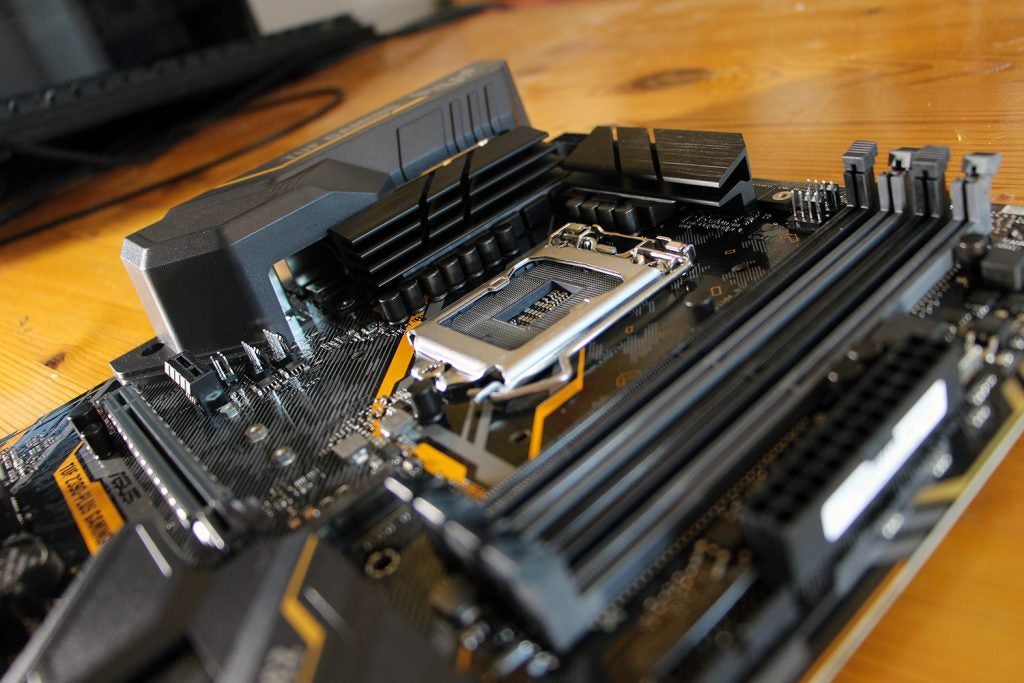 Should I Buy the Asus TUF Z390-PLUS Gaming?

The Asus TUF Z390-PLUS Gaming may do better in single-threaded tasks, but the £140 MSI MAG Z390 Tomahawk is similarly quick in those benchmarks and offers better multi-threaded and gaming performance.

Meanwhile, the £167 ASRock board is better in virtually every test, and the Gigabyte Z390 Aorus Pro leads the way with faster results than every affordable rival.

The Gigabyte is the clear leader when it comes to performance, then, and the Asus doesn’t have a huge amount going for it when it comes to features – this board’s branding makes big claims, but there’s not much here that you won’t find elsewhere.

If you do want something that guarantees durability and stability, then we’d save some cash and opt for the £140 version of this board without Wi-Fi. However, the vast majority of people will be better sated by the Asus’ rivals – with the Gigabyte Aorus and MSI offerings looking particularly tempting.

The Asus TUF Z390-Plus Gaming has good durability and a solid basic specification, but rivals that don’t cost much more tend to offer just as much here – and, in some cases, better connectivity and on-board slots and sockets. The Asus isn’t particularly fast, either. It’s only worth a purchase if you’re willing to give up features and speed for its promised extra durability and lifespan.