MSI’s board is the cheapest Z390 product in this group, and it certainly punches above its weight: it has a decent specification that can support mainstream builds with single GPUs and overclocked CPUs, and it has solid gaming performance. Its weaker application performance restricts where this board will succeed, but it’s a good alternative if you want to build a gaming system on a budget.

What is the MSI MAG Z390 Tomahawk?

The MSI MAG Z390 Tomahawk is the cheapest motherboard in this group of eight Z390 slates – and its £140 price offers a significant discount on rivals that all arrive at £160 or more.

The low price doesn’t mean that you get a plain-looking slab of PCB. This board is called the Tomahawk, and the design is full of military imagery: the southbridge heatsink and the heatsink above the LGA 1151 CPU socket are made from dark grey metal and are decorated with faux screws to make them look like weapons containers.

The same motif – along with the Tomahawk brand in military-style, stencilled lettering – is used on the chunky cover that’s used for the rear IO and the capacitors at the top of the board. It event extends to the small heatsink on top of the bottom M.2 slot.

The Tomahawk looks aggressive, and its feature set is reasonable.

You get the usual 64GB of DDR4 support across four DIMM slots, and there are two M.2 slots for storage. Interestingly, there’s a third M.2 slot on this board – but it only works with wireless cards. Still, it’s a potentially better option than occupying a PCI slot or a USB port with a wireless adapter.

You get six SATA ports, all of which are perpendicular to the board.

The top PCI-E x16 slot is surrounded by steel and supports the full bandwidth of the slot, but the two secondary PCI-E x16 slots only run at 4x and 1x speeds – so they’re only suitable for non-GPU expansion cards. Unsurprisingly, this cheap board only supports AMD CrossFire, and not Nvidia SLI. 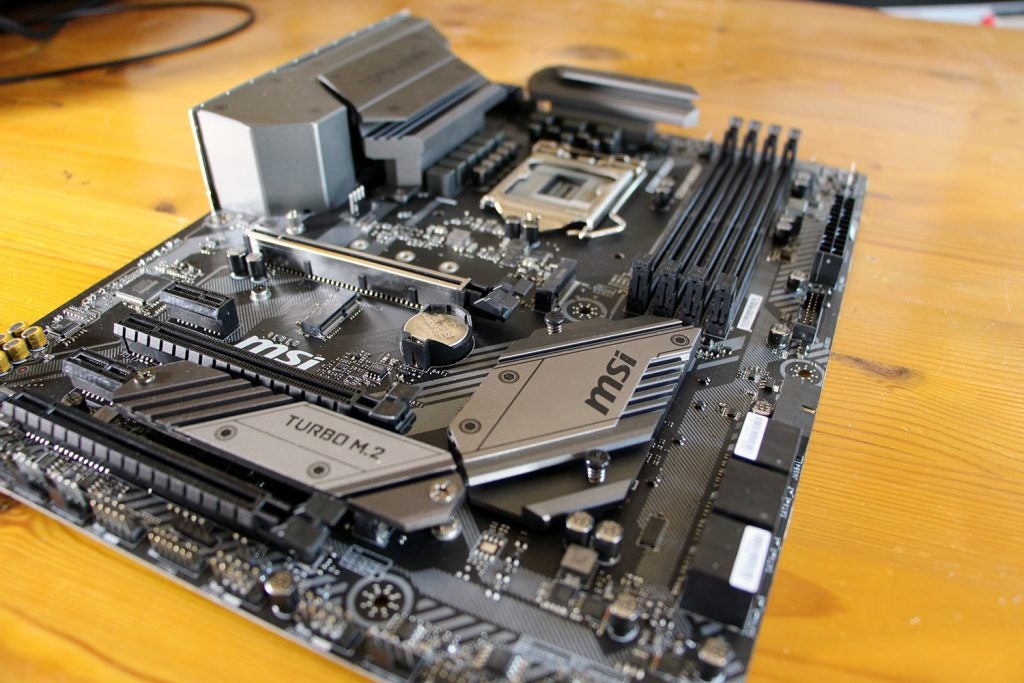 The inclusion of three PCI-E x16 slots means you only get two PCI-E x1 sockets, but that should be enough for the various expansion cards needed by mainstream builds.

This is a comparable slate of features to the £161 Asus TUF board, which had poorer multi-GPU support but more PCI-E x1 slots.

The ASRock £167 Z390 Extreme4 has better PCI and multi-GPU options still, along with support for 128GB of memory. The £173 Gigabyte Z390 Aorus Pro matches the ASRock and beats the MSI in these departments.

There are plenty of on-board connectors. You get seven four-pin fan connectors, which is more than on any of the other affordable Z390 boards we’ve tested. You get four on-board USB connectors, too, and the CPU power connector has a secondary, four-pin booster connector – so you can direct more electricity to the CPU if you want to overclock. That latter feature is also included on the affordable Aorus and ASRock boards, but not on the Asus.

At the rear the MSI has three USB 3.1 ports that use Gen 2 alongside a Type-C connector. It’s got two USB 2 ports and five audio jacks. The ASRock and Gigabyte boards are a little better here – they have more USB 3.1 connectors. 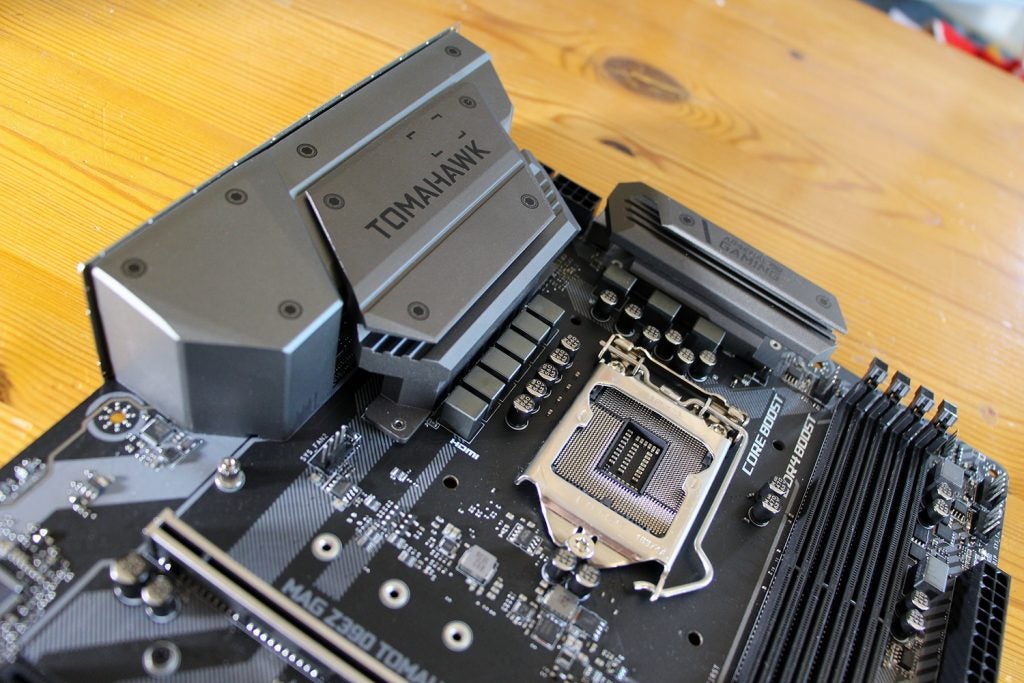 The MSI board has RGB LEDs down its side and beneath its southbridge heatsink, but it’s not overflowing with lights – the Aorus is better here.

MSI’s board has entry-level Realtek ALC892 audio, which is fine for mainstream use but not quite as good as the chipsets found elsewhere. It has standard Intel Gigabit Ethernet.

The MSI board has a better set of features than the Asus. It has more on-board headers and better rear IO, more RGB LEDs and an additional PCI-E x16 slot. It’s also got the extra four-pin CPU power connector.

The MSI has a tougher time competing with the Gigabyte Z390 Aorus Pro and the ASRock Z390 Extreme4. The Gigabyte board has more lighting, more outlandish looks and better audio, but it’s more expensive. The ASRock has more multi-GPU options, better SATA connectivity and more ports at the rear.

The MSI has good features, but its lower price becomes obvious in many of our benchmark tests.

Its Cinebench single-core result of 203cb is the lowest in the entire Z390 group, and it barely snuck beyond the Asus TUF Z390 Plus Gaming in the multi-core test. It was a little slower than the Asus board in the Geekbench single-core test and a little bit better in multi-core, but it still sat towards the bottom of the results table.

It’s a little behind its rivals in the Sandra processor arithmetic test, and it’s also a little slower in the Cinebench OpenGL benchmark.

It’s more mediocre in other departments. Its storage and memory performance is consistently mid-table, and its good idle power draw is somewhat undermined by mediocre idle power requirements.

The MSI MAG isn’t particularly eye-catching so far, then, but its gaming benchmarks do indicate more ability here.

In the 3D Mark Time Spy and Fire Strike tests it scored 7659 and 17656 points. Those aren’t table-topping scores, but they’re both better than the scores from the Asus and ASRock scores.

The MAG’s 75fps and 102fps average proved faster and more balanced than all its rivals in this price bracket, and its Middle Earth average of 146fps was ahead of the Asus and ASRock boards but behind the Gigabyte Aorus unit. 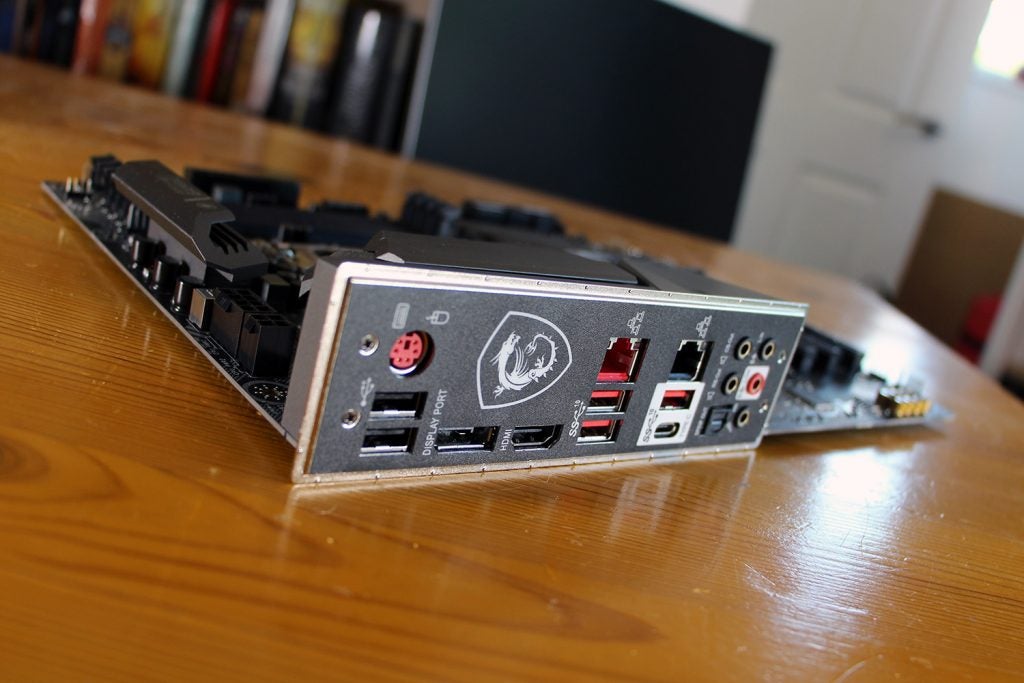 Should I Buy the MSI MAG Z390 Tomahawk?

There’s a lot to like about the MSI MAG Z390 Tomahawk. It has a specification that can handle high-end, single-GPU systems and CPUs with ambitious overclocks, and it has a solid set of on-board connectors and a good rear IO.

Its rivals from ASRock and Gigabyte do have better PCI and multi-GPU options, and some also have improved audio and more SATA connectivity. The MSI doesn’t have particularly good application performance, either, and it’s mediocre when it comes to memory and storage.

It’s surprisingly good in games benchmarks, though – it consistently beats the ASRock, even if can’t match the Gigabyte’s pace.

The MSI MAG Z390 Tomahawk has solid features, reasonable gaming performance and a keen price. The Gigabyte is a better option for affordable gaming, but the MSI is a great runner-up if you want to spend a little less cash and still get decent gaming speed.