The Garmin Fenix 6 Pro Solar is the best fitness tracker on the market at the moment, offering best in class battery life and a wealth of new activity tracking features that’ll help even the most diehard of athletes take their workout to the next level.

The Fenix 6 Pro Solar is the latest top end fitness tracker from Garmin. It’s a modest upgrade on the Fenix 6 Pro that wowed us last year, and that’s no bad thing.

Though the refinements made are modest at a glance, they add up to make the already great Fenix 6 line even better.

The biggest addition is a new custom glass that lengthens the watch’s already marathon length battery using solar energy. This, plus a few new activity tracking options, add up to make the Garmin Fenix 6 Pro Solar the best fitness tracker for serious athletes with cash to burn.

But, its advanced features and high price make it complete overkill for more casual runners and gym goers. If you just want something for tracking your morning jog, you’d be better off saving your money and going for one of Garmin’s Forerunner or Vivo watches. If you’ve even less serious and just want to track your steps then the Fitbit Versa 2 is an even more affordable option. 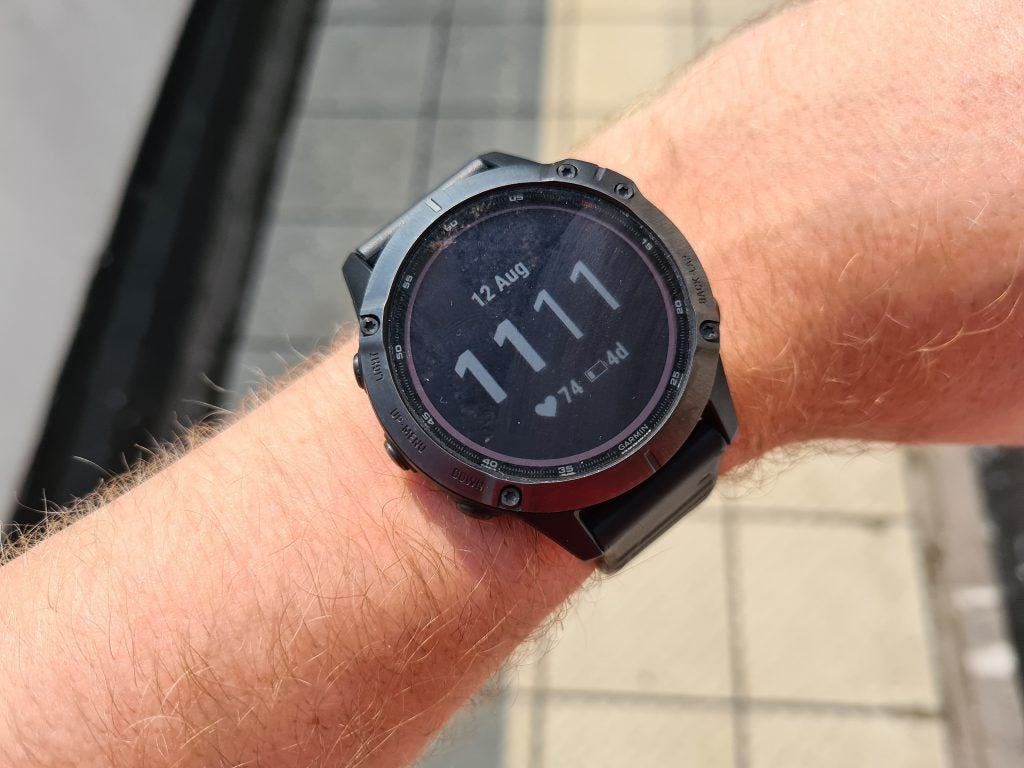 A slimmed down design

Garmin Fenix watches are not designed to look fashionable. They’re rugged devices catering for the harshest of workouts and sports, and that remains the case with the Fenix 6 Pro Solar which at first glance looks all but identical to its predecessor.

It’s a ruggedly built device that’s noticeably larger than most fashion focused smartwatches, like the Apple Watch 5 or Galaxy Watch 3.

It’s got a chunky spherical case that’s built of a fibre-reinforced polymer with a metal rear cover. Up front you have a choice of ultra durable Stainless steel or Diamond-Like Carbon (DLC) coated titanium materials for the bezel.

Again, like the non-solar Fenix 6 it has a non-touch 1.3-inch, 260 x 260 resolution, MIP screen and physical button control system. The system works exactly the same way as the Fenix 6 Pro. This lets you navigate the watch’s menus using five physical buttons littered across its sides. This sounds like a faff, but I actually find the interface fairly user friendly, especially compared to some smartwatch focused wearables’ touch systems, which expect you to use your watch like a smartphone.

The device also uses an identical proprietary charge cable to the Fenix 6. This is a minor faff as USB C would be far easier, but the design lets the watch hold an impressive 10ATM (100 meter) water resistance without the need for plugs and covers.

Up close, people coming off the regular Fenix 6 will notice a few changes however. For starters, Garmin’s shaved a few mm off the watch’s size and reduced its weight – 85g for the steel finish and 72g for the titanium. Moving from the regular Pro, this makes the Solar edition moderately more comfortable to wear.

The bigger change relates to its glass. Unlike the regular Fenix 6 and 6 Pro, the Solar uses custom “Power Glass” to coat the screen. This is the main selling point for the watch. The glass aims to help improve battery life when the watch is used outdoors. Originally I was concerned it’d be less durable than the Sapphire glass model I previously used, but after a month with the Solar I’ve had no issues with it. The watch is still in pristine condition despite accidentally being bashed into a free weight and hitting a pavement when I fell off my bike after a near miss with a white van. 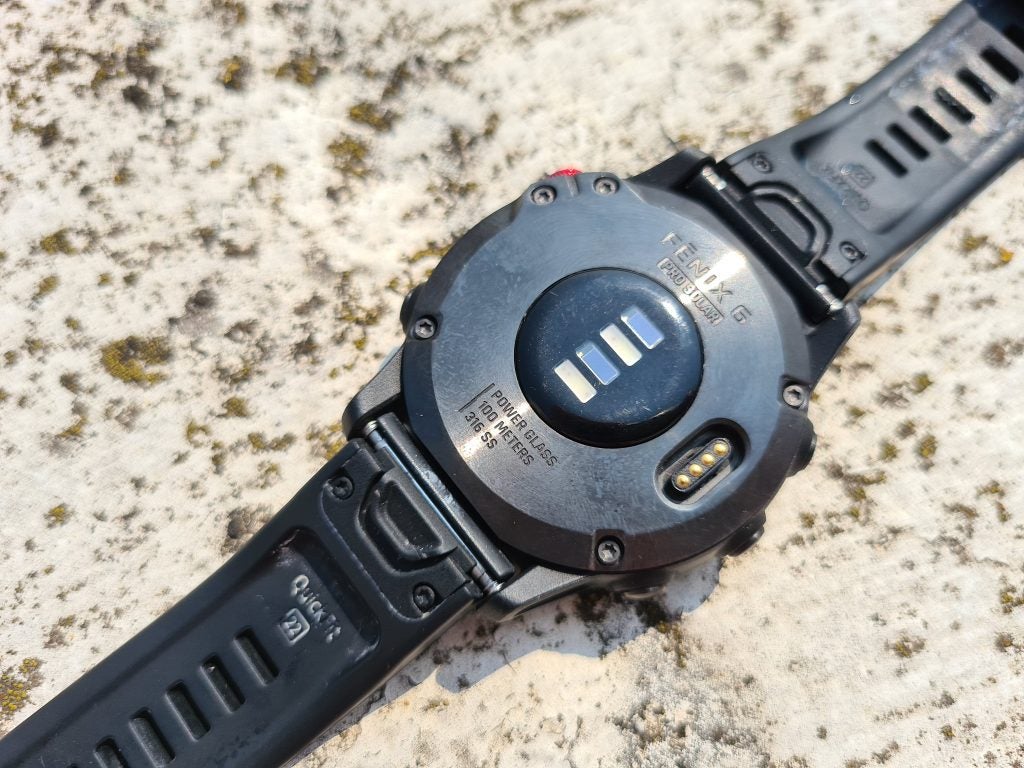 The bigger changes relate to the watch’s battery life and fitness tracking. At its core, the 6 Solar offers the same stellar multi-sports tracking as the regular Fenix 6 Pro, plus a few new nifty additions.

The software and tracking works exactly the same way as it does on the Fenix 6 Pro. On the main menu you can sort widgets to show things like your last workout, stress level, incoming notifications, calendar alerts and access the watch’s music player. As before, the watch features 32 GB of local storage which can be used to store local music, apps, map routes and “coach workouts”.

Workouts are accessed by pressing the top right button and include all the same options as the regular Fenix plus new surf, indoor climb and mountain bike settings. The features use the watch’s vast array of sensors to detect things like total waves and speed when surfing, and a nifty “Grit and Flow” setting to gauge the difficulty of the trail you’ve navigated when mountain biking.

The indoor climbing feature is the star of the show for me though, with the lack of an option being an odd omission on the Fenix line for quite some time. During testing the feature worked great and offered info on key metrics including my number of routes, vertical distance climbed, climbing time and the overall difficulty of each route. As it stands, this means the last remaining sport missing a tracking option for me remains boxing, with the watch forcing you to mark working a bag as basic cardio (the audacity).

There have been reported issues with the Garmin’s distance tracking since it changed chips for the Fenix 6. But to date I’ve only experienced issues when I’ve failed to sync it with my phone for extended periods. Pairing it doesn’t just hand stored workout data to the Garmin Connect app, it also updates the GPS/GLONASS/Galileo data to let the sensors know where the satellites should be.

Using the watch to track my daily runs and cycling I never had an anomalous distance reading pop up and generally found the watch to lock a connection in seconds.

The post workout data remains as detailed and useful as ever. Post workout you’ll get useful performance metrics like how many intensity minutes you clocked, what heart rate zones you hit, a VO2 estimate, what aerobic and anaerobic benefit you got and, crucially, how long you should rest.

The local mapping functionality and Coach services are another welcome boon. The Toppo maps offer real time directions to saved locations. The Coach service lets you download guided workouts which are shown with instructions on screen, kinda like the Fitbit Premium service. In lockdown I’ve found the Coach service particularly useful to add structure to cardio sessions and to run my own custom HIIT sessions.

The only downside is that, like all Garmin wearables, the Fenix 6 Pro Solar’s smartwatch functionality is fairly limited.

Out of the box the watch only features music controls and basic notification services. You can install extra apps from the store, but again, the offering is very limited and generally focuses on fitness and mapping. The only added bonus is that Spotify, as well as Deezer, now work on the Fenix 6 line, which is good for people without local libraries. But Garmin Pay still doesn’t work with most UK banks, which is annoying. 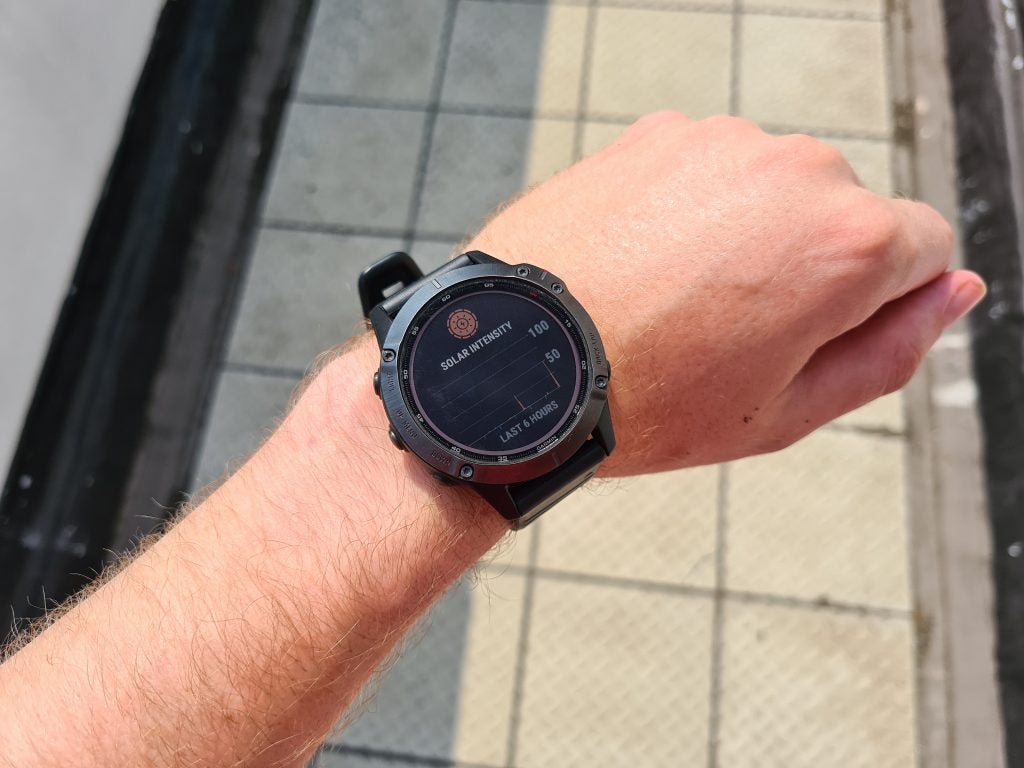 Battery life is a key area Garmin wearables always deliver on. But the Fenix 6 Pro Solar takes things to the next level, even by Garmin’s standards. This is because it uses a nifty solar charging solution to back up the inbuilt battery when it’s being used outdoors. How effective the tech is depends on where you’re using it.

Specifically Garmin quotes the watch as offering 16 days regular use with Solar on. That’s a two day improvement on the regular Fenix 6’s life. With real use I found the tech definitely makes a difference. Testing it directly against the regular Fenix 6 Pro I generally got between an extra day out of it, even during times when the weather wasn’t great. You can also check how much solar energy it’s getting by using a new Solar Intensity widget, which is also useful when gauging how much sun cream you should be putting on.

This makes the Solar best in class wearable when it comes to battery life and meant that I generally got 13-14 days regular use out of it. This entailed using it to track my morning workout (10 mins strength, 20 mins indoor bike) and lunch 5km run, which I do every other day. 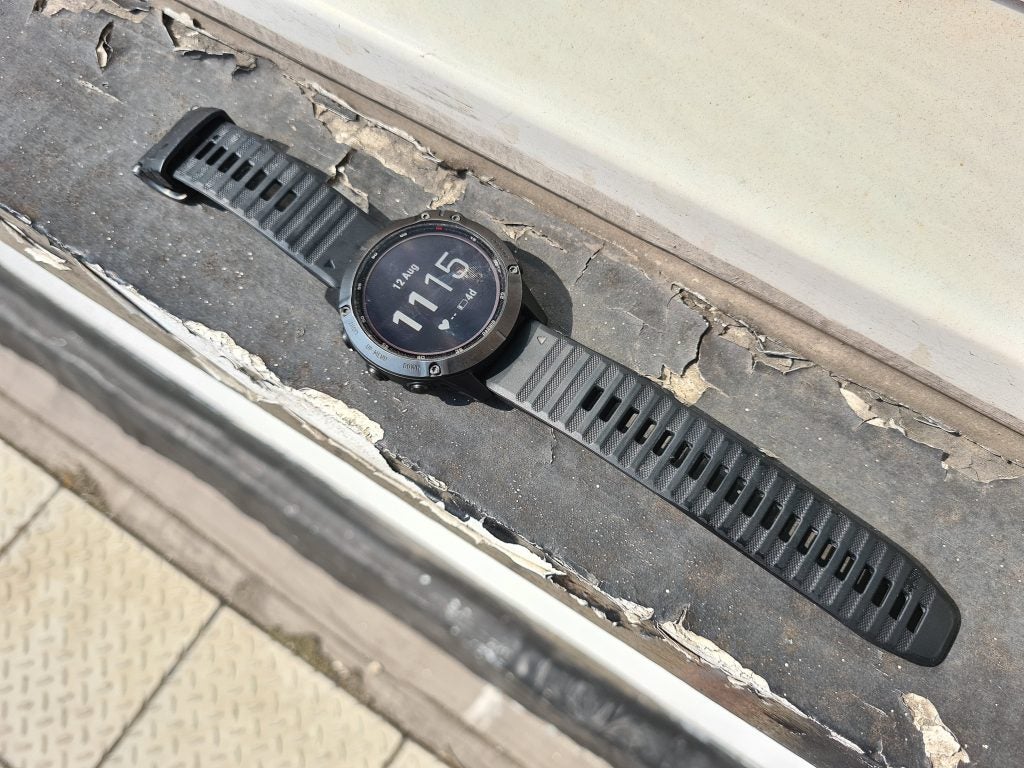 Should you buy the Fenix 6 Pro Solar?

If you’re a serious runner, swimmer, cyclist or generalist athlete looking to take your workout to the next level then the Fenix 6 Pro Solar is an excellent option.

It isn’t a massive step up on the regular Fenix 6 Pro but the changes Garmin’s made are uniformly positive. The Power Glass tech lengthens the watch’s already excellent battery life and the additions of improved indoor climbing, surfing and mountain biking tracking are very welcome improvements on the wearable’s already stellar portfolio of activities.

The only downside is that its smartwatch functionality remains fairly mundane, and with pricing starting at £740 it is a very expensive luxury. More casual users will be better off investing in one of Garmin’s cheaper vivo or Forerunner watches as a result. Smartwatch fans would also be better off looking at something with a more developed app ecosystem, like the Apple Watch or Galaxy Watch 3.