The Garmin Fenix 3 is designed to feel watch-like. It doesn’t have a touchscreen and it doesn’t use any gestures in its interface beyond a long button press. It’s all about button-operated navigation, with up/down menu systems that you flick through with the use of the “up” and “down” buttons that sit on the left side of the Fenix 3. 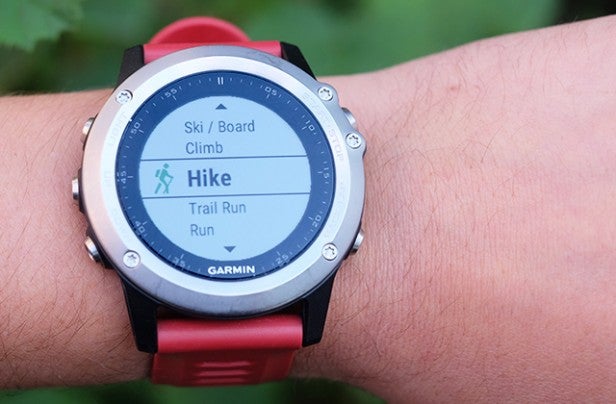 Just pick one of the above, then press the “start” button again to signal to the Fenix 3 to begin tracking. It’s simple. Garmin has been careful to ensure accidental presses don’t leave you lost mid-race by requiring you to long-press the “up” button to get to the more involved settings menu.

The interface is basic compared with an Apple Watch, but just right for this sort of device. 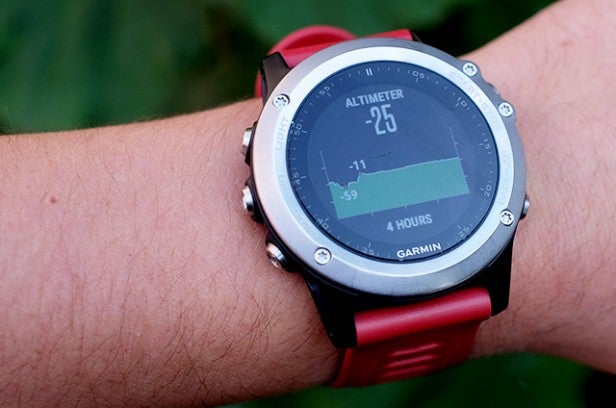 Any other apps you choose to install will come from the Connect IQ store. This is a bespoke Garmin app store found within the Garmin Connect app, used to review your runs and other tracking data. From here you can download many different watch faces, some of which pack in an incredible amount of data, new apps and even a few games.

Garmin itself has added a few little extras through this store, such as tennis and basketball trackers. However, right now it’s best to consider what’s built into the Fenix 3 as the large extent of its abilities.

One feature present in the Fenix 2 is missing here, however. It’s not possible to view a map of your location right from the watch. Why? It’s to leave room for the Garmin Epix, a slightly more expensive but much plainer-looking watch that includes 8GB of storage to store full country maps. 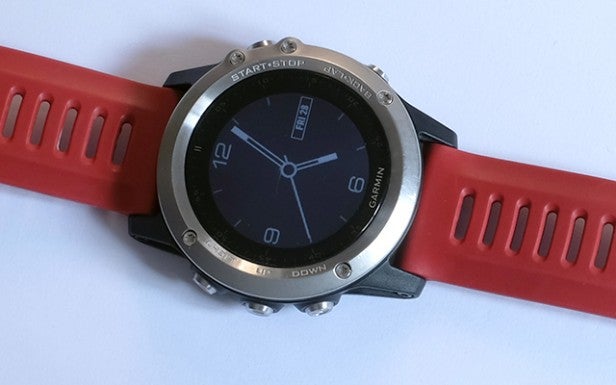 If you’re a serious hiker, the Garmin Epix might be worthy of consideration. But it doesn’t have Wi-Fi – which the Fenix 3 does – and user reports suggest it’s buggier.

The Garmin Fenix 3 includes an array of sensors, as well as the lead GPS. You get Bluetooth and Wi-Fi for data syncing with a mobile device, an accelerometer, barometer with altimeter, and GLONASS to get you more accurate and fast location sync than standard GPS.

All these sensors let the Fenix 3 track marathons and mammoth cycles without the aid of a phone. Using GPS, it’s possible to get fairly good accuracy too.

As with the Vivoactive, it isn’t pin-point perfect; the chipset used by the rival Suunto Ambit3 is widely considered more accurate. However, we found that unless you’re concerned with cross-referencing against a visual map, the distance and speed figures are fairly accurate. 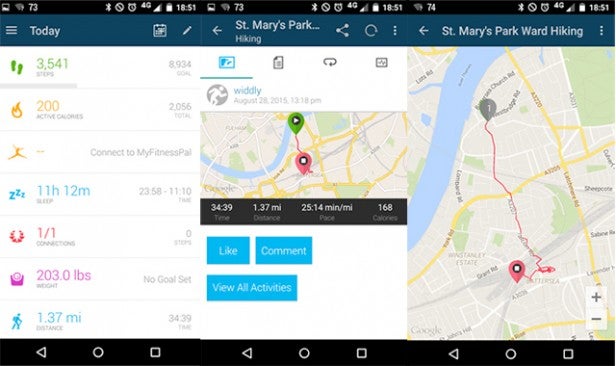 Locking onto signal is quick too, taking around five seconds for destinations of which it knows, or up to a minute or two for new ones. 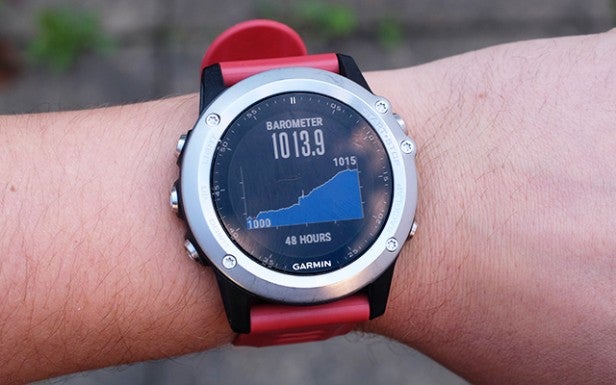 Things are similar with the altimeter read-out. In the Fenix 3’s hiking mode, the altitude can seem a little slow to update, but it’s only a case of the data being a couple of seconds out. What helps to even out these slight niggles is how intuitive and flexible the watch is.

Each activity has its own tracking screen, with a specially tailored display that provides all the data fields you need to view mid-exercise. The running activity has displays for distance, time and pace on one screen, a page of lap distance/lap time/lap pace, and a third one displaying your heart-rate data. The Fenix 3 offers up a decent amount of data per screen, without overloading things. 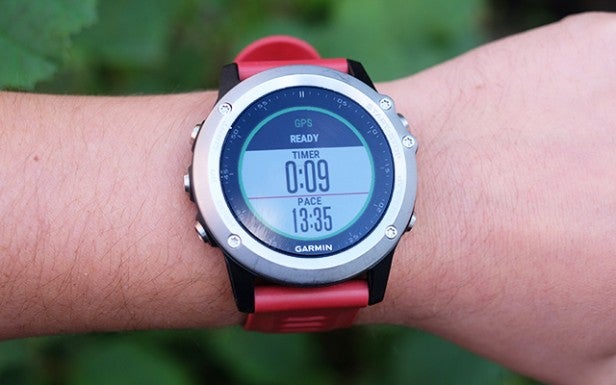 However, to really get the most out of a Fenix 3 you’ll need to invest in some accessories. The main one is an HR sensor, since the watch doesn’t have one.

This is largely because most wrist-worn sensors aren’t particularly accurate. You can buy a Fenix 3 bundle, which includes a chest strap.

The Garmin Fenix 3 supports plenty of sensors outside of the Garmin ones, because it’s compatible with the ANT+ standard. There are wrist-worn ANT+ heart-rate straps available too, if you don’t want a chest one.

A few of the built-in activities presume you’ll have an ANT+ sensor. For example, try the “indoors bike” mode without a connected bike cadence sensor and all you’ll only be measuring for how long you’re pedalling.

Garmin’s own GSC10 bike sensor costs around £35. This isn’t a complaint as such, you just need to make sure you know exactly what the watch can and can’t do on its own. 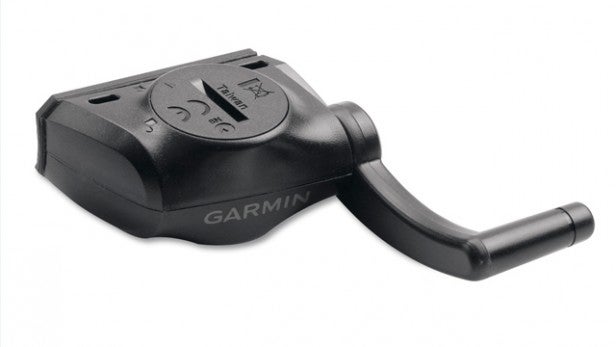 In fact, it may actually be the more casual fitness fan who becomes annoyed by the lack of a HR sensor in the Fenix 3.

Those who consider themselves “athletes” will want accurate HR data that lets them see their exertion levels throughout a course. The casual crowd may be happy with only the occasional heart-rate check, and will therefore be totally put off by the idea of a chest-strap accessory.

However, the Fenix 3 does offer the always-on step tracking available on cheaper fitness trackers. Press “down” from the watch face and you’ll see a screen detailing your steps, calories burnt and how close you are to reaching your goal. Plenty of watch faces show your daily step count too, if you want an even more immediate read-out. 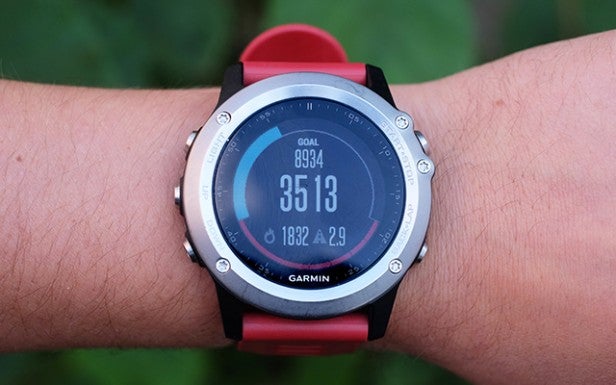 If you’ve looked though the entire Garmin range, you may be wondering what the Fenix 3 offers over the Vivoactive, the cheapest watch to offer similar capabilities to this one. As well as Wi-Fi and much better battery life, this higher-end watch lets you manage your exercise plans directly from the watch, set targets and set up a training calendar.

The Fenix 3 doesn’t cover one activity that the Vivoactive does: Golf. The cheaper watch offers hole details on tens of thousands of courses worldwide.

This is a baffling omission for a watch that costs around twice the price and is otherwise the much more capable of the two. Garmin: What were you thinking?