What is the Garmin Vivoactive?

The Garmin Vivoactive is a fitness watch that cuts all the fat, and some of the muscle, off the higher-end Garmin Forerunner runner’s watches. It delivers a GPS tracking device in a package that looks and feels like a lifestyle smartwatch.

Typically priced between £141 and £159, it’s around the same cost as cheaper Android Wear watches, and a little less than the Pebble Time. It’s also less than the more recent Fitbit Blaze. While the Blaze has the advantage of including an optical heart rate monitor, the Garmin Vivoactive has the edge where it comes to GPS tracking being built in. As the Vivoactive supports ANT+ sensors, you can still at least bolster and augment its capabilities if you find it lacking with accessories such as heart rate monitor chest straps.

But can it really compete with fully-fledged smartwatches? Yes, but only if you’re a bit of a fitness freak. It lacks the wealth of apps available with watches that run Android Wear and PebbleOS, and isn’t quite as hot for notifications either. However, excellent battery life and a side order of smartwatch smarts enable it to cover both bases well enough for most people. If you’re in the market for a new fitness tracker, or even a keen golfer, the Garmin Vivoactive is worth considering. 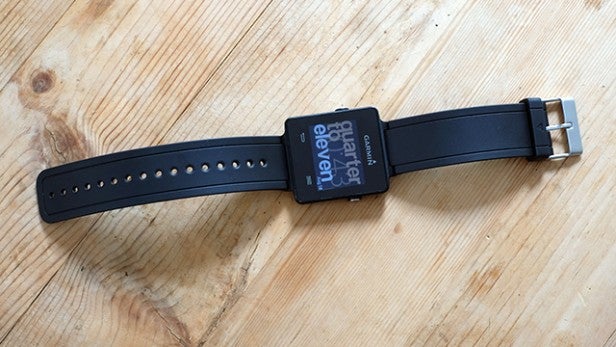 The Garmin Vivoactive could be described as the Pebble Time’s ugly sister (granted, it actually came out first). Its watch face is square and flat, lacking the gadgety flair of the many showy smartwatches out there.

It isn’t going to turn heads, but there’s a charm to its fairly low-key style. It’s slim and far smaller than many a full-on runner’s watch, or any Android Wear watch. While Garmin probably envisioned the Vivoactive as being the cooler cousin to its more obvious fitness-obsessed wristwear, in this class it’s rather unobtrusive. And we like that. 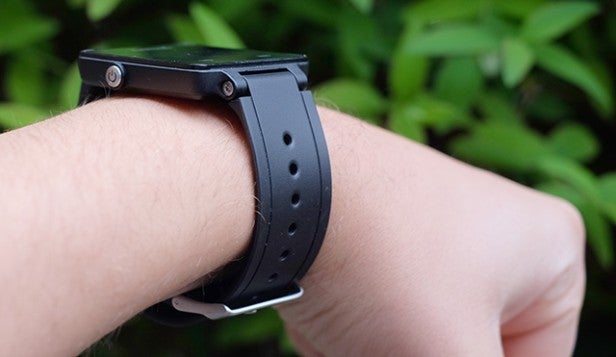 Design-wise, Garmin could have made a little more effort. While we’re not too put out by the basic rubber strap in a sub-£200 watch, does it really need to have strap holes running so far up it that even a mouse’s arm couldn’t fit into the tightest setting? Of course not – and in tandem with the square face, there’s a slight calculator-style geekiness to the look.

Luckily, it will be easy enough to tart up the Vivoactive a little with a replacement strap. Garmin offers several styles: a leather one costs around £20, and a softer silicone strap is available for around £10-12. 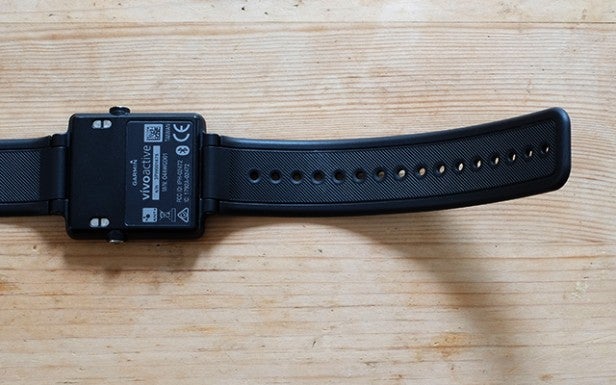 Features such as the visible strap screws give the Vivoactive a slight nuts ’n’ bolts feel, as does the lack of ergonomic smarts to the design. The back of the watch face is flat, and the strap has quite a stiff design. Still, we had no problems with comfort: there was no skin irritation, and since it’s so small and light, it doesn’t really need wrist-hugging curves to feel snug in place.

The part of the Garmin Vivoactive’s design that is worth paying attention to is the screen. This 204 x 148 pixel LCD panel isn’t of the type you’ll find on most smartwatches. It’s much closer to the display on the Pebble Time, with high-efficiency tech that enables it to remain on all the time while barely using any power.

It’s a colour screen too, used to good effect in the interface. It’s clear in bright sunlight, although it needs a front light in order to be visible in the dark. The light can be set to turn on whenever you use the Vivoactive – but is one of the weaker parts, being a little dim. Still, this is ultimately an excellent screen for this kind of device. Who wants to have to press a button just to see the time? 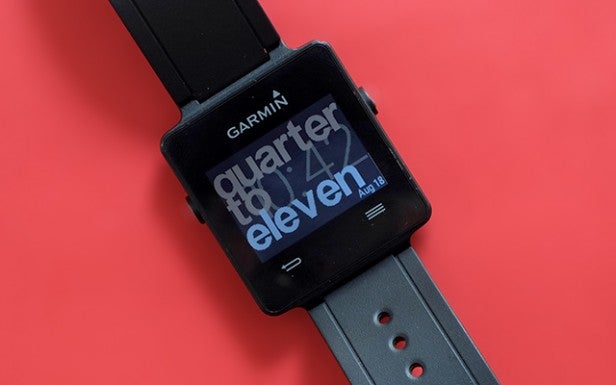 Being always-on is a terrific benefit for any watch, and the screen is what enables the Vivoactive’s fantastic battery life. Garmin says it’ll last for up to three weeks if using only its basic features, such as step counting. However, this time reduces significantly if you’re tracking your exercise using GPS – but that’s to be expected – to around ten hours.

It’s still possible to get a full week’s use between charges if using the Vivoactive to receive notifications from a phone 24/7 and to track exercise for perhaps 2-3 hours a week. It’s a wonderfully low-maintenance watch.

To charge you simply plug the Vivoactive into its small plastic dock, which plugs into a USB port. Android/Windows phone owners can use their phone charger. 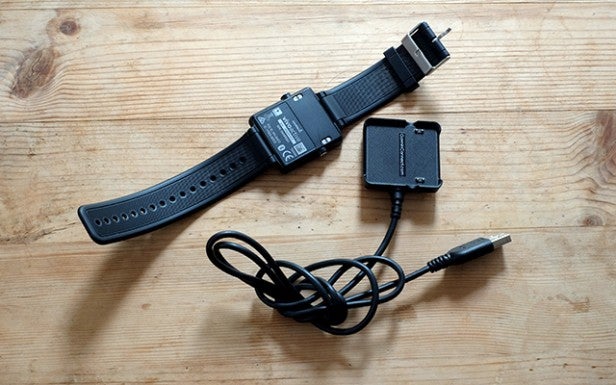 There are plenty of ways Garmin could have improved the Vivoactive’s design. However, in practical terms, the positives far outweigh the negatives.

Next
Fitness, GPS and Interface Review