What is the Garmin Fenix 3?

The Garmin Fenix 3 is a serious runner’s watch. It’s big, it’s expensive and makes a pretty bold design statement on your wrist. But it’s also great.

As well as offering GPS tracking for runners and cyclists, the Garmin Fenix 3 has specific modes for other sports and exercise, including skiing. It also adds full notifications and has its own app store, meaning even dedicated exercise-obsessed tech heads won’t need to invest in both a running watch and a smartwatch.

On the smartwatch side in particular, it isn’t quite a direct replacement for an Apple Watch or Android Wear watches. But it absolutely decimates all non-dedicated exercise watches in terms of activity tracking. 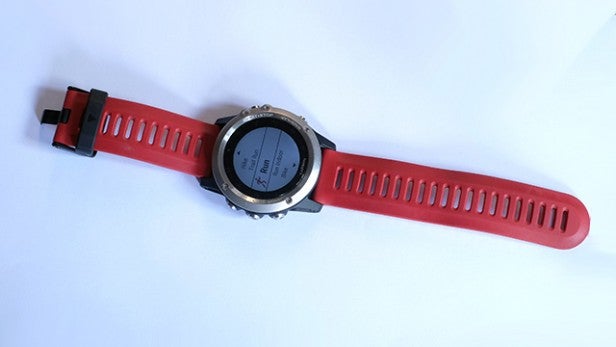 The Garmin Fenix 3 sits right at the top of the Garmin sport watch lineup. It lives roughly alongside the Forerunner 920XT, a slightly smaller, square-faced model designed primarily for triathlon runners.

This is more an all-purpose outdoors watch, with dedicated modes for hiking and skiing as well as cycling, running and swimming. Also, it has a design that threatens to engulf the wrists of all but the manliest of forest rangers. The Garmin Fenix 3 is larger even than the Forerunner 920XT and Fenix 2, with a watch face that protrudes 16.7mm from your wrist.

It’s big. And while we’re against the idea of specific gadgets being “for men” or “for women”, Garmin seems to have a predominantly male audience in mind for this one. 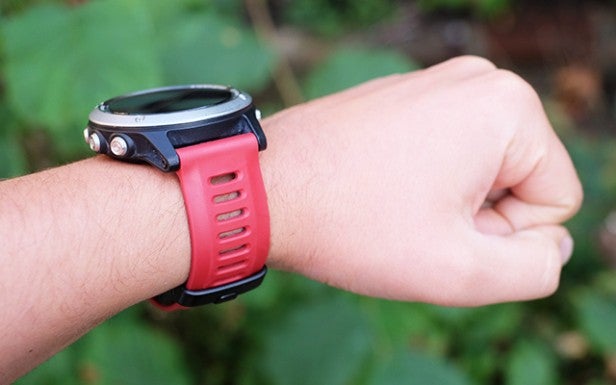 Given the imposing dimensions, though, I think you’ll find the Fenix 3 surprisingly comfortable. Thanks to its reasonable weight, it won’t disappear on your wrist like its dinky brother, the Garmin Vivoactive, but it’s comfortable enough to wear all day.

I did tend to take it off while typing at a desk, however – and generally when sleeping too (even though it offers auto sleep tracking).

The latter is a personal thing, but since the watch face is quite chunky, it can tend to get in the way a bit more than an “ordinary” watch.

Its styling most closely resembles a diver’s watch, which may appeal if you’re not a fan of the running watches that appear to be more mini-computer for the wrist – such as the other top Garmin models. Suitably enough, it’s waterproof to 100m, just like any respectable diving watch.

It isn’t an all-metal design: Only the rim and buttons are metal. But the plastic casing feels incredibly tough, clearly a higher grade of material than you’re likely to see in the average fitness tracker. It’s “fiber-reinforced polymer”. Very fancy. 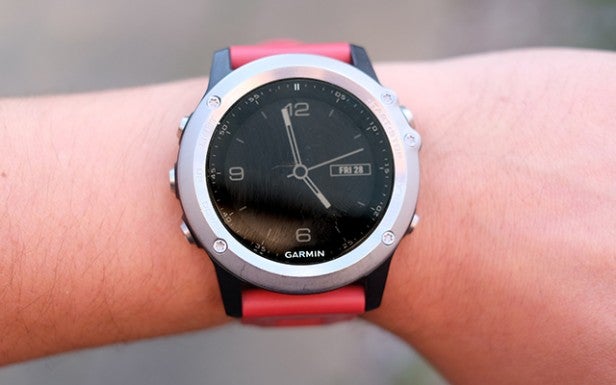 Given how hardy it looks it was disappointing to find the Garmin Fenix 3’s standard watch face scratch-proofing isn’t up to the job. The watch arrived to us with quite a pronounced scratch across the middle of its display, having clearly suffered rough treatment elsewhere already.

The company does actually makes a special, super-hard version of the watch with a Sapphire Crystal top layer. This is worth considering now that you can pick one up for as little as £360; it also comes with an extra metal link band. However, given how much weight this would add to the watch, we’d prefer to stick with the rubbery strap. 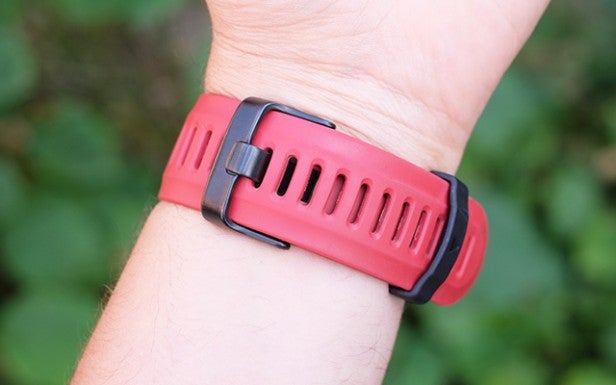 The default strap has clearly been designed with exercise in mind. It uses a standard, non-clap design, with holes pitted throughout that double as ventilation.

Back to the front, the Garmin Fenix 3’s screen is similar to the one featured on the Garmin Vivoactive. It’s a low-power LCD panel, and its advantage over the screen on the Fenix 2 is colour. This isn’t deep and rich colour, the kind you might find on an LG Urbane, but it helps to give the interface more visual interest, particularly when viewing all those graphs.

In terms of screen character, it’s somewhat similar to the E Ink displays of Amazon Kindles, or the screen of a calculator. While not flashy, it’s practical since the display can remain on 24/7 while consuming very little power. 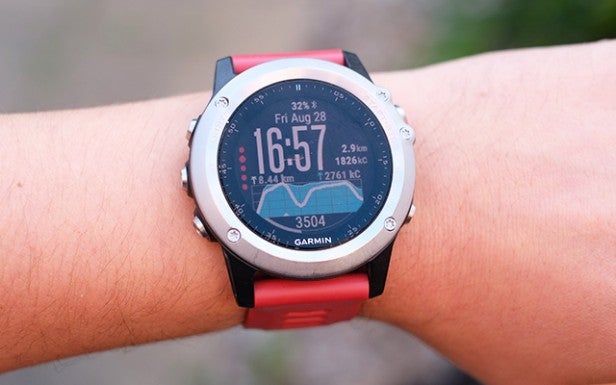 The downside is that the Fenix 3 screen isn’t natively visible without ambient light. However, a bright built-in watch light is included. As standard it comes on when you press the dedicated light button on the side, but you can also switch it to turn on when you press any button, or even waggle your wrist. Contrast is a little low without the light on, lacking clarity in low-level indoor lighting or worse.

While not dazzling, in general this is a great screen that performs the functions of telling the time and constant activity tracking without killing the battery.

Battery life is excellent. I’ve been using it rather generally: an hour of tracking here and there; for notifications; and as a watch. Having charged the Fenix 3 just under a week ago, I was down to 56% of battery life.

Compared to more insubstantial running watches and almost any other smatwatch, this is a great result. However, stamina is similar to that of the Forerunner 920XT. According to Garmin’s figures, the Fenix 3 will last for up to 20 hours with full GPS tracking or 50 hours of lower-intensity hiking tracking. Or five weeks as a plain old watch. 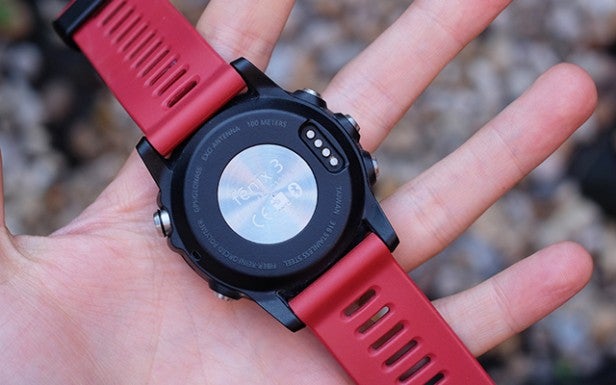 Among its rivals, such as the Polar V800, this level of stamina may the norm, but it’s far in excess of what we’re used to from most other gadgets.

To charge the Fenix 3, you simply place it in a clip-on frame that then plugs into a USB adapter.