What is the Fossil Q Marshal?

To say that the Fossil Group has embraced smartwatch technology is a bit of an understatement. It’s integrated Android Wear or Misfit hybrid watch functionality into nearly all its brands, including Skagen, Michael Kors, Kate Spade, Armani and, of course, Fossil.

But beyond the traditional watch design, there’s not a great deal to make the Fossil Q Wander stand out from the Android Wear crowd.

Average battery life and a disappointing screen make it feel like just another Android Wear watch churned out to have as many Fossil options on the market as possible. But there is some solace to be found in the knowledge that Android Wear 2.0 is, according to Google, on the horizon.

Watch: Which wearable is right for you?

Fossil has a penchant for watches on the larger side, and the Fossil Q Marshal certainly is a big’un. There’s no missing its 45mm watch case, nor its 14mm of thickness that eclipses even the Samsung Gear S3. 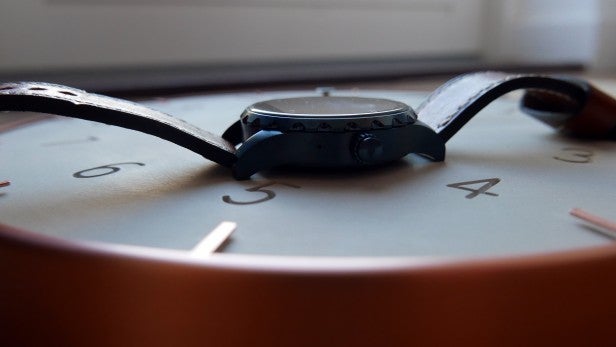 A shrinking violet this watch is not. Even more so if you opt for the Brown Leather option, which pairs a brown strap with a striking blue watch case. The bezel around the face is ridged, like the ones you’d typically expect to rotate on a diver’s watch, but this one is purely decorative. There’s also a non-rotating crown that is, in fact, a button on the side.

If this colour combination doesn’t win you over, there are more traditional grey and silver steel options, which include a steel band, as well as a black and silicone strap pairing. Preferring slightly more subtle designs, I would’ve preferred those to the review model I was sent. But to each their own. 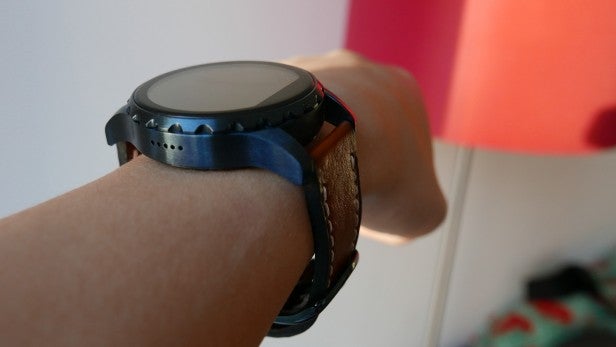 The leather strap of the model I reviewed is thick and rather stiff. There’s contrast white stitching that adds some visual flourish, but again, I wasn’t a massive fan. The stiffness of the strap has broken in after a few weeks of wear, but it’s still not particularly comfortable. Fortunately, you can replace it with standard straps if you wish. 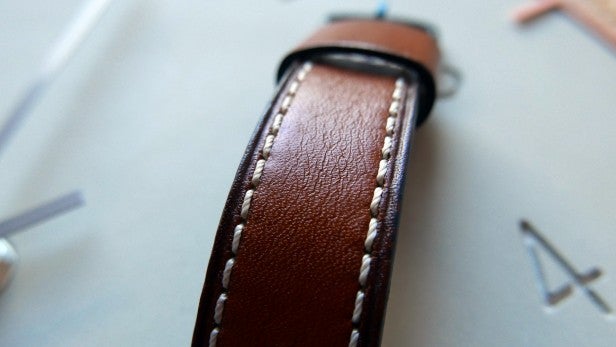 The Q Marshal is IP68 rated, so feel free to take a shower with it, but even that probably isn’t recommended if you’ve got the leather strap option, as you’ll ruin the leather.

Flip the watch over and you notice the omission of a heart rate monitor. This isn’t a smartwatch geared towards fitness, even though you do get the usual activity tracking if you want, thanks to a G-sensor and gyroscope.

One of the more underwhelming aspects of the Q Marshal is its screen. At 340 x 290 in resolution it’s not necessarily wanting for pixels, but it still has a grainy quality to it. There’s also a washed-out look to the colours that’s accentuated by poor viewing angles. 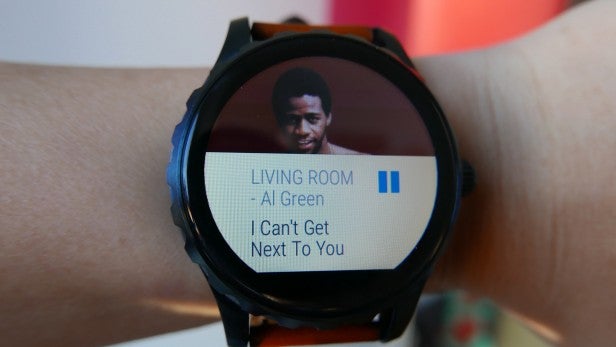 It has an always-on display mode that provides a monochrome, lower-power version of your watchface, which at least gives a better illusion of wearing a real watch.

Annoyingly I found the gyroscope detection to be rather hit and miss when initiating a wrist rotation to actually view the display. It’s meant to take the display out of its always-on display mode, but it would occasionally fail to do so unless I used an exaggerated motion.

The lack of a light sensor is another odd ommission that means the display won’t adjust its brightness based on your surroundings. 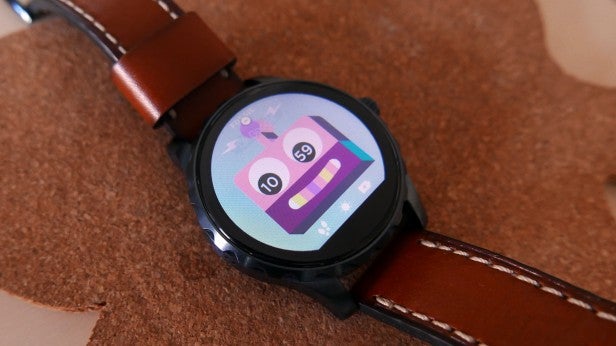 A Fossil Q watch app lets you pick different watchfaces based on colour and there are some rather tasteful ones in there, so you’re not short of customisation options.

As mentioned earlier, there’s not a lot that makes the Fossil Q Marshal feel special in a sea of Android Wear watches.

But in its defense, the Qualcomm Snapdragon 2100 processor inside makes Android Wear feel as snappy as it possibly can. Swiping between screens is never met with any stutter or judder and apps open up with decent speed. ‘OK Google’ voice support works without a fault, too. The 4GB of built-in storage is par for the course.

There’s basic step counting and sleep data available to Google Fit, but since Fossil only rates the battery life at 24 hours, you’re likely going to be charging the Q Marshal overnight, ruling out it tracking your slumber.

In my weeks of wearing the Q Marshal, I found that 24-hour estimate just about right, occasionally dipping a little below if I actually used the watch more frequently or got more than an average number of notifications. It’s an improvement in stamina over previous Fossil efforts, but against other newer smartwatches it’s disappointing it won’t make it past the two-day mark between charges. Charging is at least convenient through its magnetic inductive charging cable. 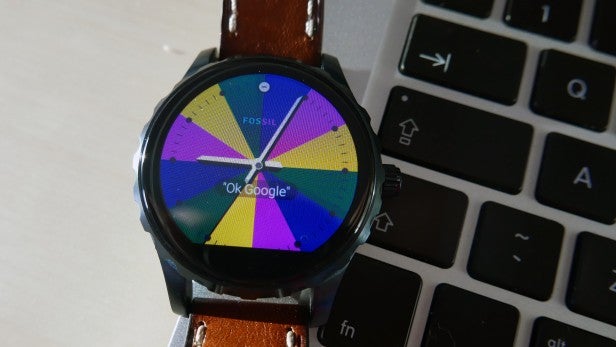 Should I buy the Fossil Q Marshal?

There’s not a massive amount to get excited about with the Fossil Q Marshal, unless you’re particularly enamoured by any of the designs. Admittedly, I think I’d hold the black silicone model in higher esteem than the model that’s been gracing my wrist.

But beyond Fossil’s trademark watch designs, the Android Wear implementation is uninspiring and there’s nothing here to make the Q Marshal seem particularly special. It also feels expensive for what you’re getting.

I really think Fossil is better off taking a more considered approach rather than flooding the market with different watch designs with Android Wear shoe-horned in. At least Android Wear 2.0 is set to roll out to the Q Marshal – but it’s still unknown when precisely that will happen.

If owning a smartwatch that can pass as a traditional watch is your priority, the Fossil Q Marshal might be for you. Anyone else will be dismayed at the lack of functionality.