What is the Samsung Gear S3?

Samsung’s had a fair few cracks at smartwatches now, with some faring considerably better than others. The Samsung Gear S2 certainly veered the closest to “hit” rather than “miss” compared to previous efforts.

This year’s Gear S3 takes some of the familiar principles – the round display and Tizen operating system – and augments them with a raft of new sensors and a bigger, bolder design that more closely resembles a classic analogue timepiece.

The “bigger” part shouldn’t be understated, though. Due to packing in the likes of GPS, a barometer, an altimeter and a bigger battery, the Samsung Gear S3 is a seriously chunky smartwatch. It’s not going to suit every wrist.

Even with that said, it’s a seriously classy timepiece, but unfortunately still hindered by the Tizen operating system’s lack of must-have wrist-based apps.

The Gear S3 is actually available in two models – the Gear S3 Classic and the Gear S3 Frontier – although there’s no difference in the smart functionality of the two models. I was sent the Frontier model to review.

The Frontier is targeted towards those with more active lifestyles and comes with a more weather-resistant silicone band. The Classic errs more towards classic timepiece styling, with its traditional-style crowns and leather strap. 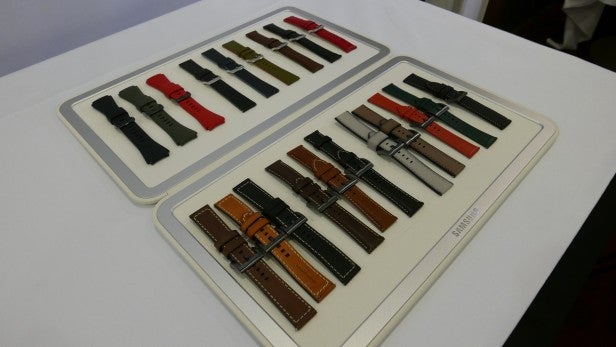 Both Gear S3 variants are compatible with standard 22mm watch bands, however, so you’re free to customise as you see fit.

What I didn’t like about the standard Gear S2’s bezel was how slippery it felt. It meant rotating could be difficult. The one on the Gear S2 Classic had distinct ridges along its edge, much like on a diver’s watch, which alleviated the issue. Fortunately, the Gear S3 improves on that further.

This bezel control was one of my favourite elements of the S2 and is by far the most natural way of interacting with a circular smartwatch. It means your fingers don’t obstruct the screen. 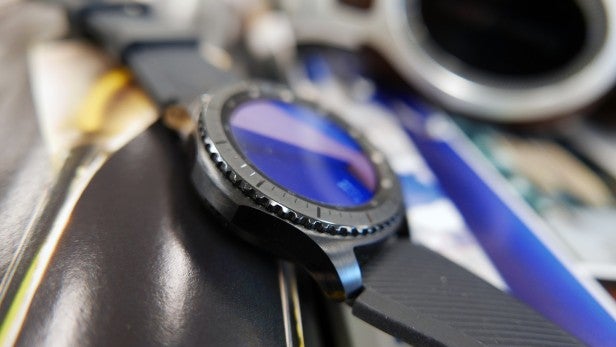 Magnets in the bezel give some tactile feedback and make jumping between screens and menu items feel really natural.

With the case measuring 46.1 x 46.1 x 12.9mm, there’s no getting away from the fact this is a chunky watch by any standards. Its thickness in particular is problematic. It means the watch gets caught on cuffs or jacket sleeves. Depending on your fashion sense, it can sometimes be difficult to actually gain access to the Gear S3 as you struggle with your sleeves.

It’s also pretty heavy at 63g for the Frontier or 59g for the Classic. That’s without the additional weight of the straps, too. 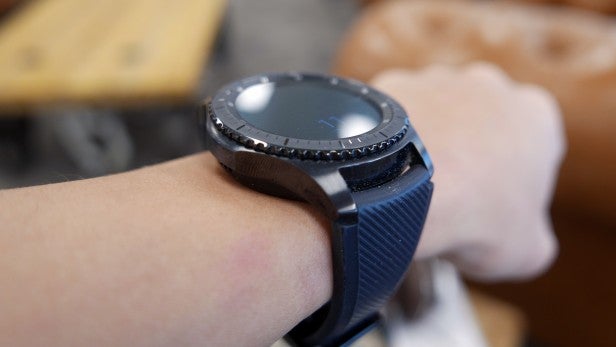 If you’re planning on wearing the Samsung Gear S3 to run, you’ll definitely notice it on your wrist. It felt as heavy as two separate trackers I wore simultaneously on my other wrist during testing.

Two buttons on the side provide a way to access the menu and go back, just like on the S2, and it’s where you’ll find the microphone. New with the Gear S3 is a built-in speaker, so you can actually use it to make and receive phone calls – although you’re going to look rather silly doing so.

You can even use it to play music, but that’s not advisable. Better to pair some headphones or a Bluetooth speaker.

The silicone strap of the Frontier model is well built, and there are two loops for taking up the excess slack. It does pick up some lint and fluff, but it’s not as bad as the Polar M600 that looked incredibly scruffy almost immediately out of the box. 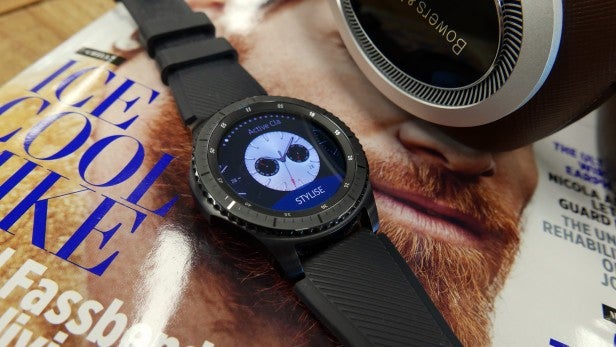 In part, the size of the Gear S3 can be excused considering it has a raft of sensors that make it more like a dedicated sports watch. Inside are an altimeter, barometer, accelerometer and GPS, then there’s an optical heart rate monitor on the back.

All of these make the Gear S3 a tantalising prospect for fans of exercise or the outdoors, but I’ll discuss this more later.

Beyond the more obvious analogue watch styling, the Gear S3’s larger size is dominated by a 1.3-inch display – a bump in size from the Gear S2’s 1.2-inch screen. It has the same resolution as the Gear S2, however, at 360 x 360.

While the resolution remains the same, Samsung says it has done extra work around anti-aliasing to avoid jagged edges. That seems to have paid off, as the Gear S3’s AMOLED screen is one of its best features. It’s big and bright with vibrant colours. The colour palette has been doubled to 16 million from the Gear S2 and looks all the more exciting for it. 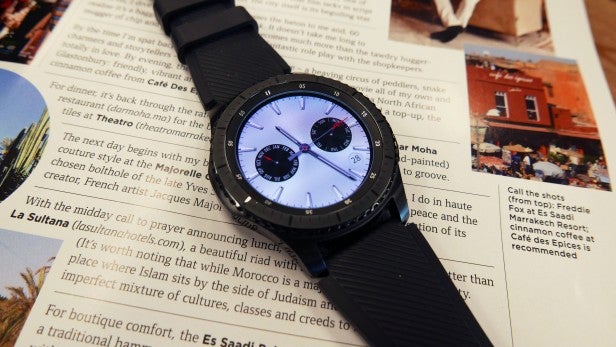 It supports always-on display as well, which displays a lower-power version of whichever watch face you select so you’re not left with a blank screen on your watch when not in use. This does negatively impact battery life, however.

As before, if the display lights up at an inopportune time, you can cover it with your palm to turn it back off. Particularly useful if you’re in the theatre or cinema, as I found while wearing the Gear S3. Alternatively, you can put it in Do Not Disturb mode and it won’t turn on for incoming notifications, plus the sound is muted and vibrations are turned off.