Fitbit's cheapest tracker ditches the heart rate monitor to bring down the price – but it's a step too far.

In a move to streamline its lineup of fitness trackers, the new Inspire range looks to replace the likes of the Alta, Flex, Zip and One as the new entry-level option.

Launched at the same time as the Fitbit Inspire HR, the Inspire does away with the PurePulse heart rate monitor in order to bring down the price.

However, for a meagre £20 saving, the number of features lacking as a result of its omission just isn’t worth it. Perhaps this was Fitbit’s marketing intention all along, but it’s worth stretching to the Inspire HR if you can.

On first glance, the Inspire is practically identical to the Inspire HR in terms of design. The actual tracking component sports the same rounded corners as the HR model, which serve to make the Inspire feel instantly more friendlier and approachable. After all, the Inspire range is for those who don’t want to wear a device that more resembles a smartwatch such as the new Fitbit Versa Lite or Fitbit Ionic.

The Inspire features an OLED screen that’s now a proper touchscreen, rather than a panel of the type seen on the Alta, which simply responded to recognising firm taps. What this means is that you can now swipe to switch between screens as you would on a touchscreen, like you would on your smartphone. It makes interacting with the Inspire far more intuitive.

Having a display at all is a big step up from the outgoing Flex range. Now that the Flex 2 has been discontinued, Fitbit is acknowledging that folk are looking for more than a few LEDs to update them on their step count. 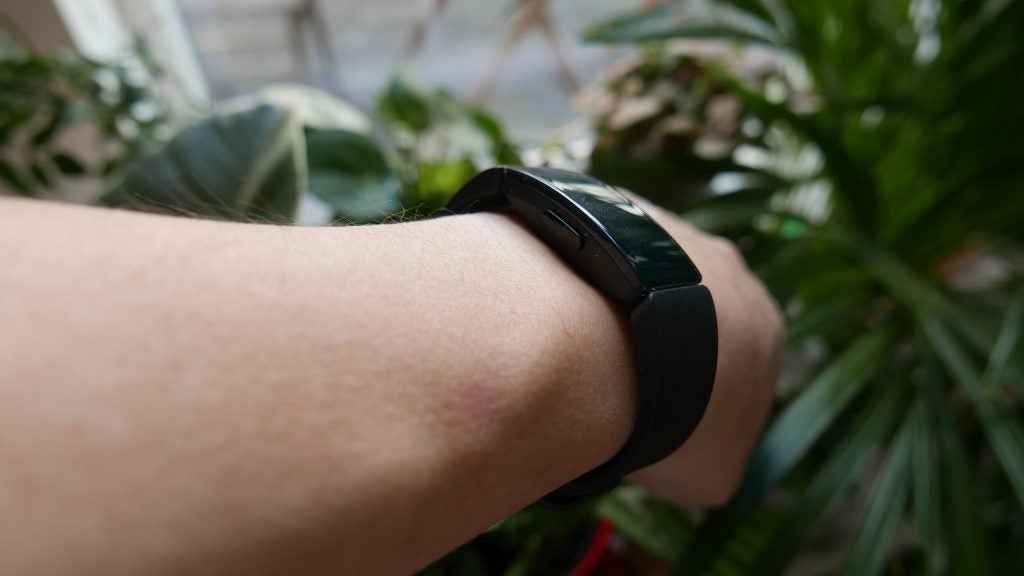 As such, the Inspire can mirror notifications from your smartphone, and the relatively large screen does a good job of relaying the reason your phone has just vibrated in your pocket, and whether or not it’s worth digging out. While you can receive messages from the likes of WhatsApp or SMS mirrored, since the screen is fairly narrow, it doesn’t really lend itself to displaying big chunks of text.

The OLED screen is also nice and bright; I didn’t ever struggle to read it outdoors, whether for checking the time or getting a step count update. You can wake the screen by rotating your wrist, a feature that worked more consistently here than some other models I’ve reviewed in the past. You can access a quick settings menu by pressing a physical button on the side of the device, plus that same button also lets you back out of menus quickly.

Handily, the quick settings option lets you turn off the wake gesture – a good idea at night if you don’t want to be woken by a blast of the display’s backlight while in bed. I do wish that disabling the wake gesture could be automated in the app, however, much like a Do Not Disturb mode.

Swiping up and down on the watch screen gives you a view of useful information: your step progress, number of calories burned, and how many hours you’ve slept for example. You also have quick access to countdown and stopwatch timers, which are useful during a workout. 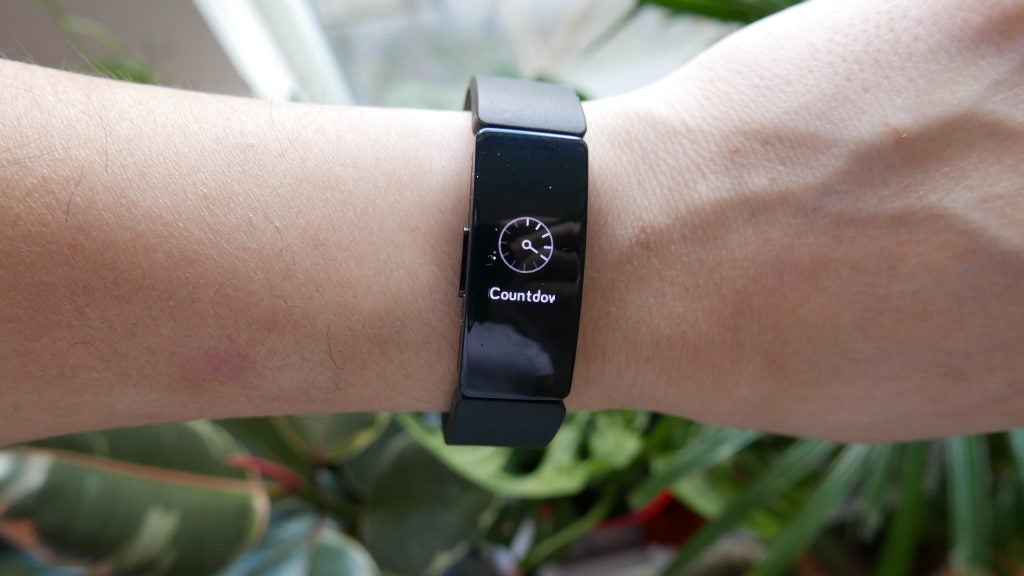 So far, pretty much all of the above functionality is identical to that of the Inspire HR. However, scrutinise more closely and you’ll notice some changes. First of which, of course, is the absence of that glowing PurePulse optical heart rate monitor on the rear of the device to take constant readings.

The second change concerns the included silicone strap. The Inspire HR uses a silicone strap with a standard watch buckle fastening, which works rather well. The Inspire, on the other hand, has a button fastener, which you might find a little more fiddly. In particular, my mum – whose fine motor control isn’t what it used to be – would consistently struggle with this compared to a standard buckle.

Not only that, but the material of the strap is also different. The Inspire HR’s strap is noticeably more stretchy and supple, making it super-comfortable on the wrist; the Inspire’s strap is stiff and more firm. While not exactly uncomfortable, it’s certainly feels worse. You do at least get both small and large strap options included in the box. 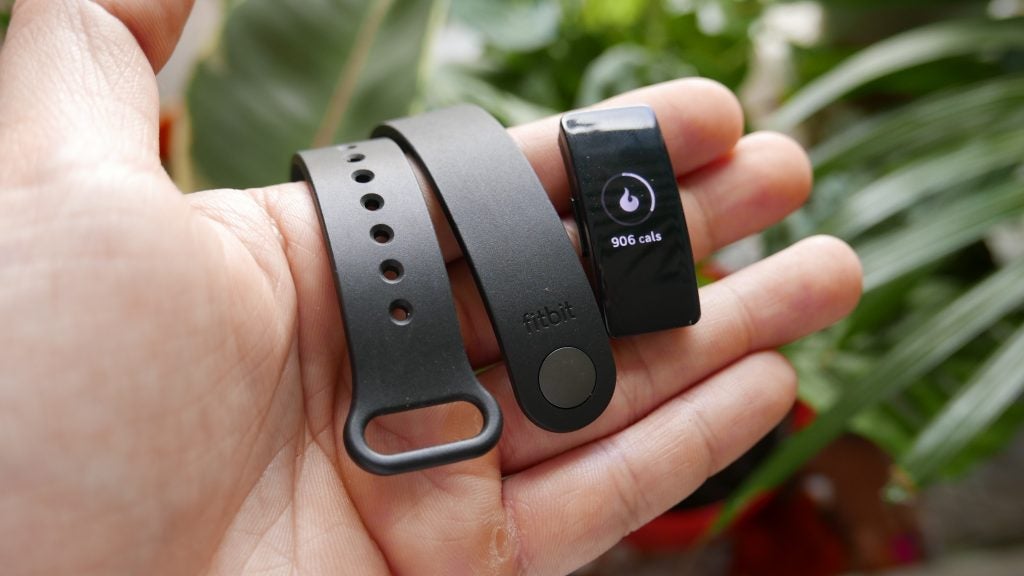 Interestingly, for those not wanting to wear a fitness tracker on their wrist, there are also clip-on accessory options. It means that not only does the Inspire replace the Alta range, it’s actually also killing off a whole range of other Fitbit devices such as the Fitbit Flex 2 and the old Zip and One models. All three had options to wear them away from your wrist.

It’s a useful option for anyone wanting something more discreet. It’s worth noting that you’ll have to wear the Inspire HR on your wrist overnight for any sleep tracking, however. Clip on accessories are sold separately for £19.99, which is a tad pricey. 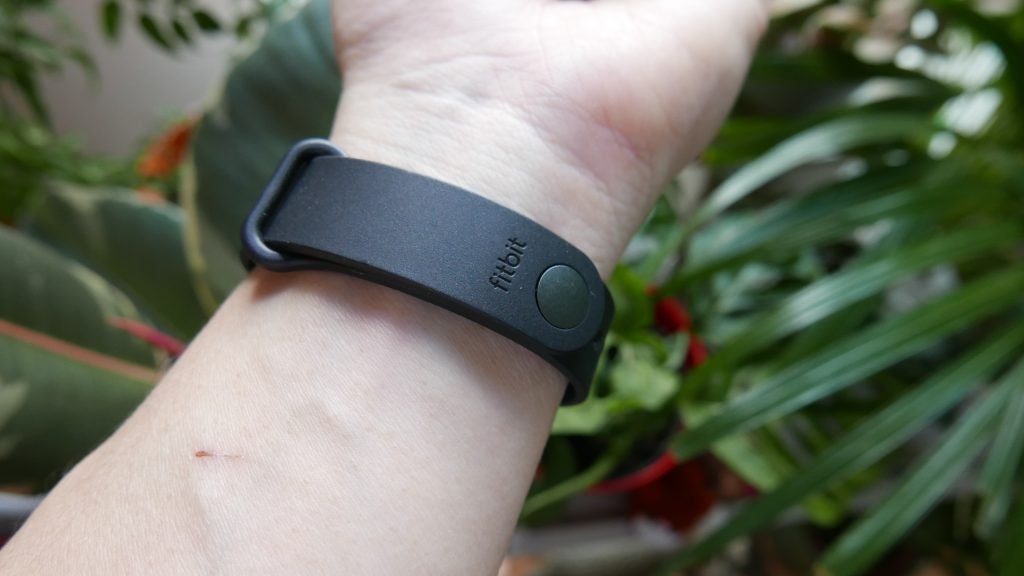 Water-resistance to 50 metres is a welcome inclusion on the Inspire, since now not only is it safe to swim whilst wearing the device but you can also keep it in place when taking a shower.

Let’s get this out of the way early: the Fitbit Inspire isn’t the tracker to opt for if you care at all about actual exercising. This is very much a fitness tracker that’s based around keeping an eye on your general activity levels throughout the day. If you’re beginning to feel like you’re too sedentary, and you need a kick up the rear end to get up and moving more frequently then sure, the Inspire can likely do what you need.

However, the omission of the PurePulse heart rate monitor has greater ramifications than simply no longer being able to monitor you resting heart rate. It’s used for a raft of other features that might not have initially come to mind, from more detailed sleep tracking to guided breathing to estimating your VO2 Max. For £20 more, even if just to future-proof yourself in case you do start caring about these things, I believe it’s worth investing in the Inspire HR. 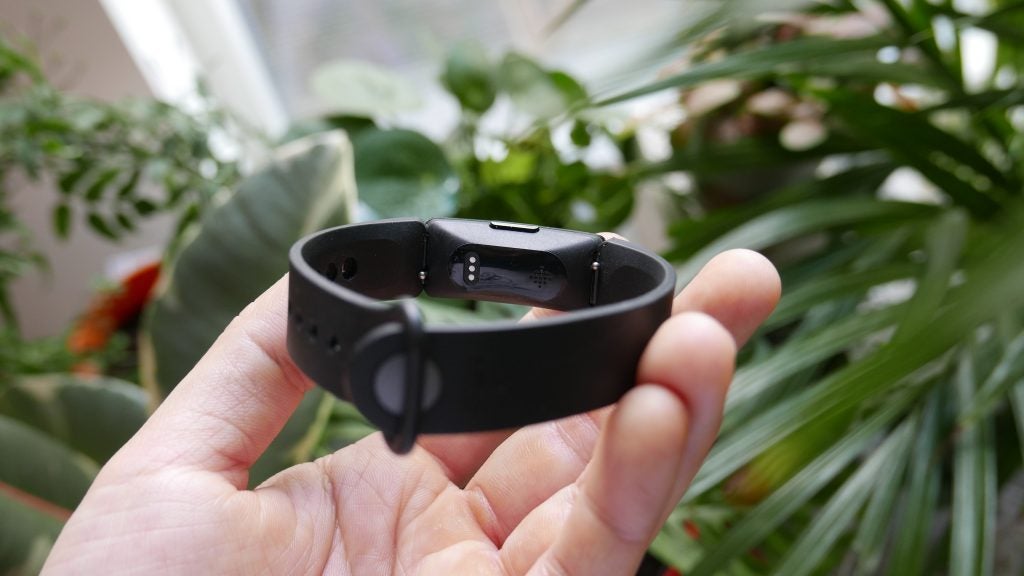 It isn’t only the PurePulse monitor the Fitbit Inspire lacks, however. Connected GPS has also been dropped. This lets the Inspire HR piggyback the GPS sensor in your smartphone during an outdoor workout, allowing you to more accurately track distance and pace. Although, once again, the Inspire isn’t really geared towards exercise, so it makes sense that it isn’t included.

However, as before, the saving of only £20 isn’t a big enough price difference to justify missing out on such a useful feature. If you think the Inspire might be the gateway to actually wanting to be more proactive in your health and fitness, just spring for the Inspire HR.

Ultimately, the Inspire doesn’t really provide much more  fitness tracking than the previous entry-level device, the Fitbit Flex 2. You’ll get the usual step counting and move reminders. There’s automatic exercise tracking for activities such as walking, running and cycling. But these all use the accelerometer, so the accuracy isn’t great. 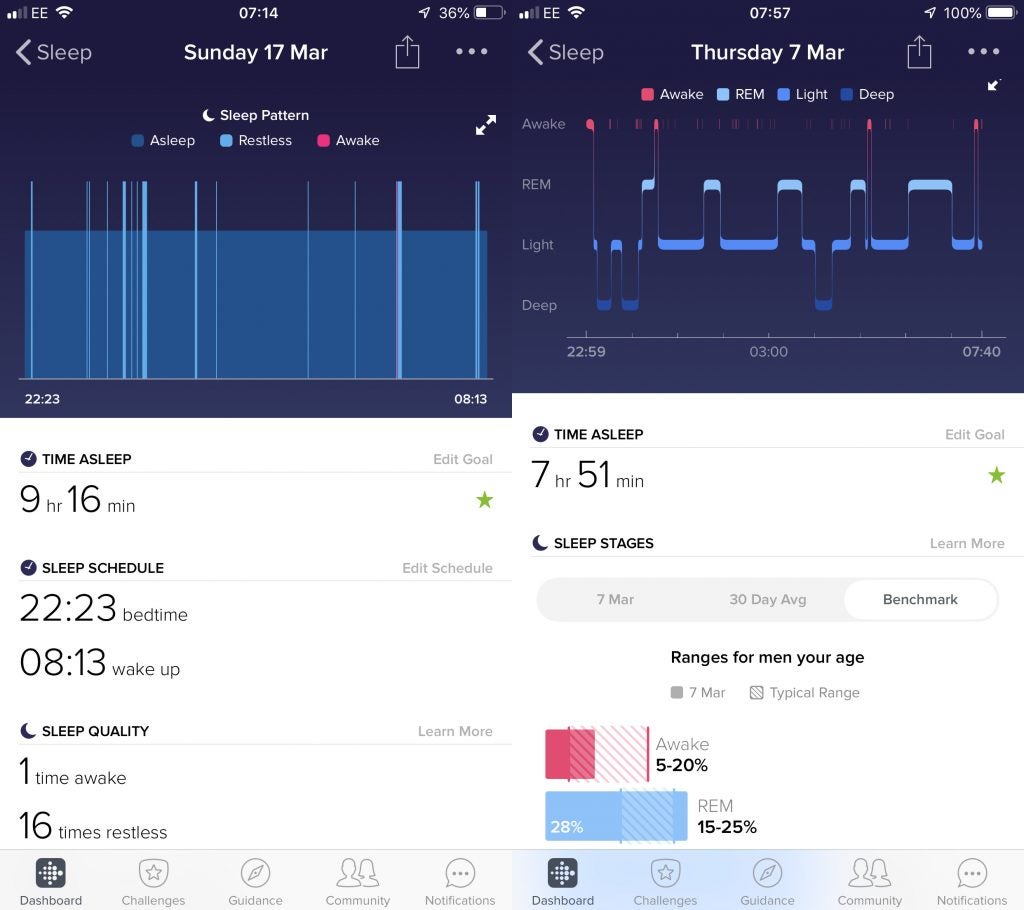 The Inspire also only provides bare-bones sleep tracking. The HRM-equipped Fitbit devices all use your heart rate to provide greater insight into your sleep stages, so you get better granular information about how much time you spend in light, deep and REM sleep. This information is useful to determine sleep quality, alongside actual duration. Without an HRM, the Inspire is only able to divulge how much time is spent asleep, restless or awake. 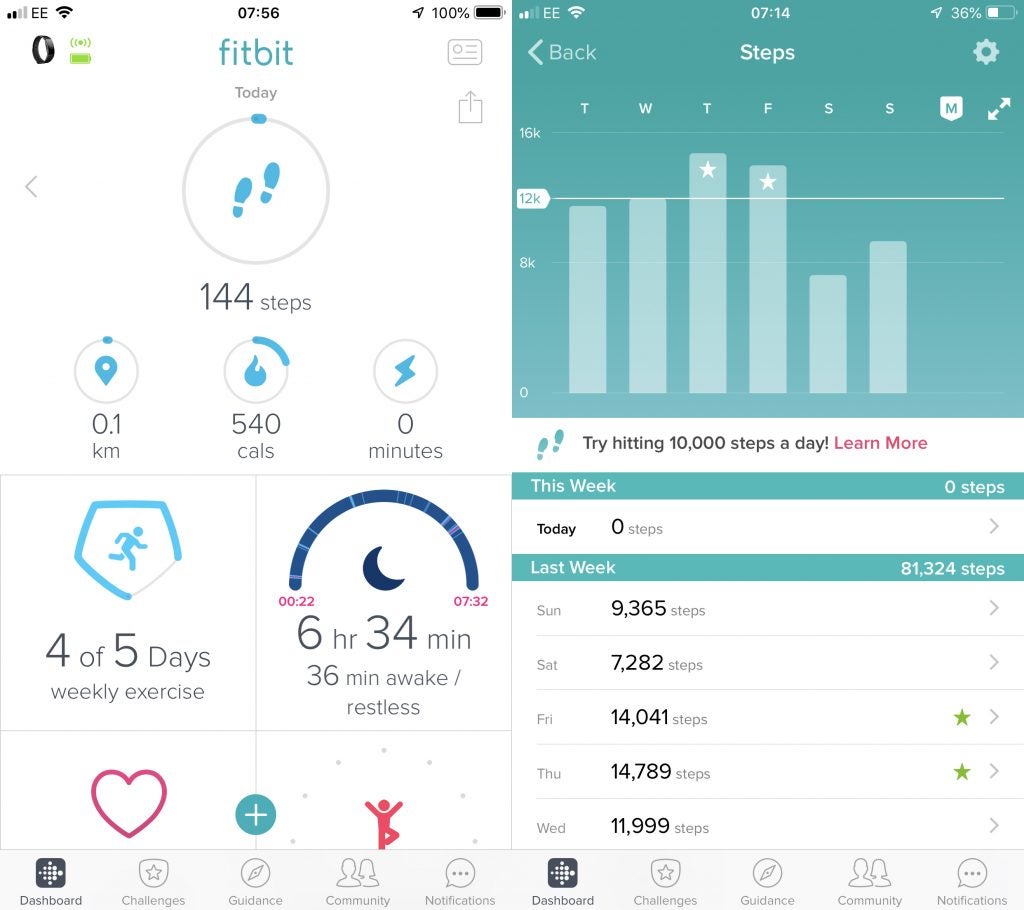 The Fitbit app is clean and intuitive.

Still, all of this information is presented in the clean and intuitive Fitbit companion app for iOS or Android. The dashboard makes it easy to view the days where you’ve hit your step goal in order to maintain your streak, as well as how many hours you’ve hit at least 250 steps.

The move reminders here are useful to keep you on track, buzzing on your wrist 10 minutes to the hour to make you aware of the number of steps remaining to reach your goal. You can also use the Fitbit app to log your food and water intake, but since the process to do this is fairly involved, I didn’t really use the feature. 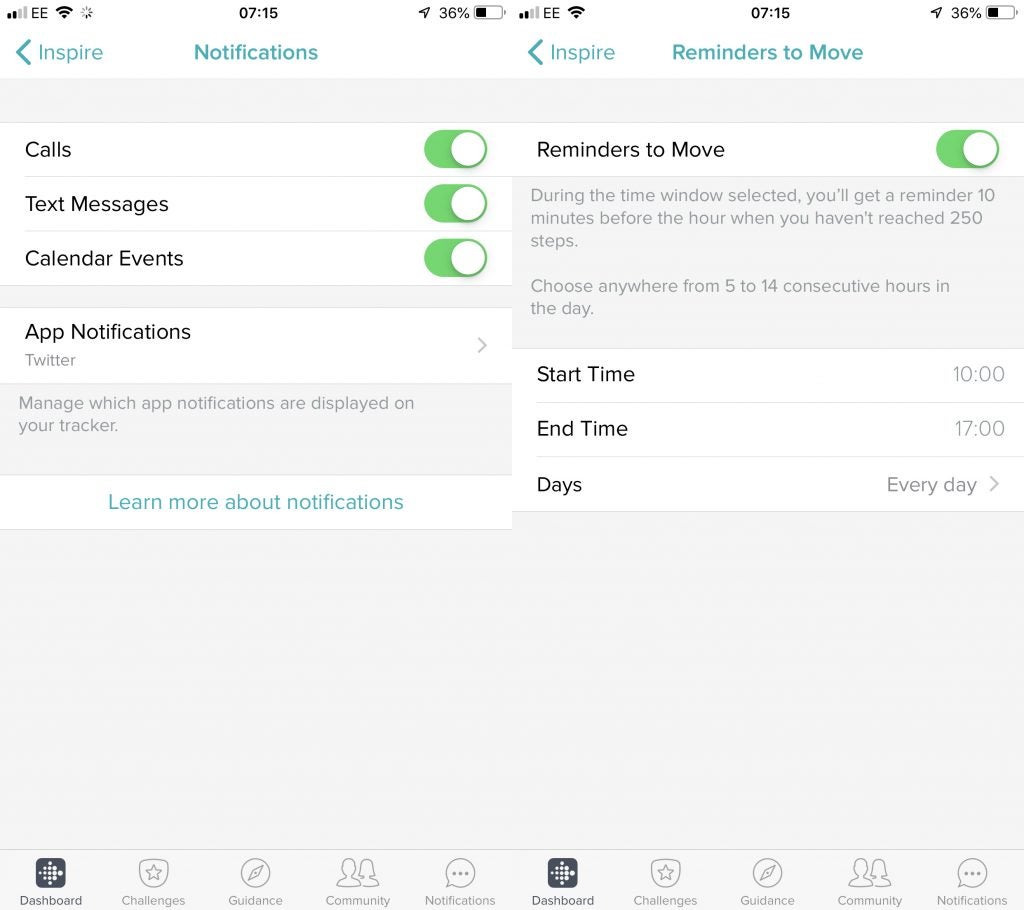 You can also use the app to follow friends and family, so the leaderboard serves as a useful bit of competition to keep you motivated.

Fitbit rates the battery at five days, which felt about right during my testing. I’d have expected the Inspire to last a little longer than the Inspire HR considering the lack of HRM, but they’re identical in terms of stamina.

Topping up the charge is done via the magnetic charger that attaches to the back. It’s nice and straightforward, with the magnet staying firmly attached throughout the process. The cable is pretty short, however. 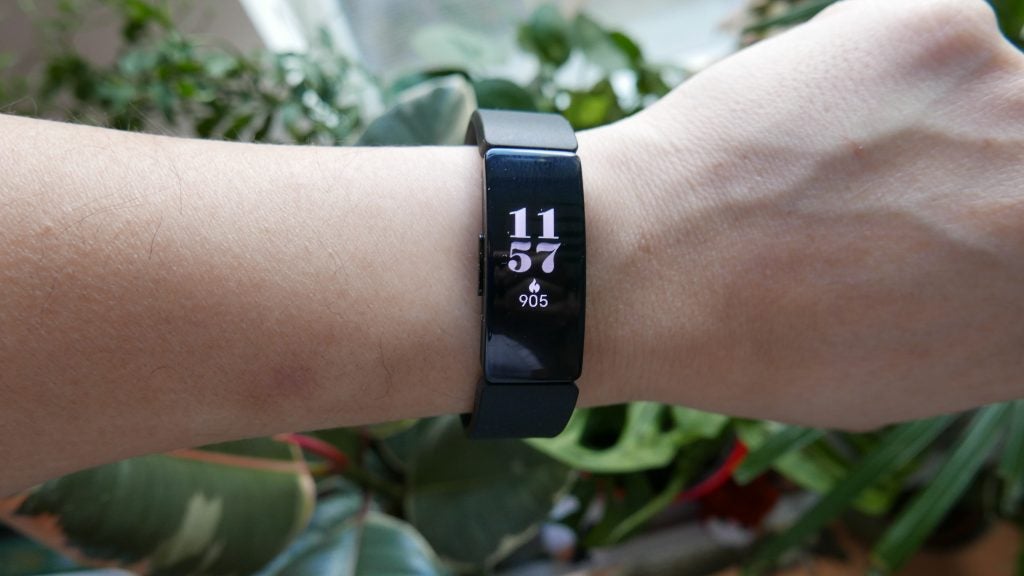 Why buy the Fitbit Inspire?

I’ve said this a number of times now, but I really don’t feel the Inspire is worth buying over the Inspire HR – especially for only a £20 saving (at least on the RRP). With so many features missing as a direct result of not having a heart rate monitor – and Connected GPS also on the chopping block – the £20 saving isn’t really justifiable. And, although minor, there’s the far less comfortable strap.

You’re better off investing that extra £20 in future-proofing and motivating yourself to take a more proactive step to exercising. If budget really is a factor, then there are a bunch of more budget-friendly options out there, such as the Honor Band 4 (which actually also includes a HRM) or the Huawei Band 2 Pro (includes both a HRM and GPS) that will serve you better.

The Fitbit Inspire cuts one too many features without adequately slashing the price for it to earn a recommendation over the Inspire HR.