What is the Huawei Band 2 Pro?

The Band 2 Pro is the premier device in Huawei’s current line of fitness wearables, sitting just above the company’s regular Band 2.

It aims to entice buyers away from more established fitness trackers from the likes of Garmin and Fitbit, by offering top-end features traditionally only seen in significantly more expensive wearables. Highlights include a stellar battery life, 5ATM waterproofing, GPS, multi-sport capabilities and VO2 max tracking.

If you’re on a budget, you won’t find a better-value fitness tracker. Slightly obtuse software, a fairly clunky control system and, on occasion, hit-and-miss tracking make it feel a little less refined than its more established competitors, however. 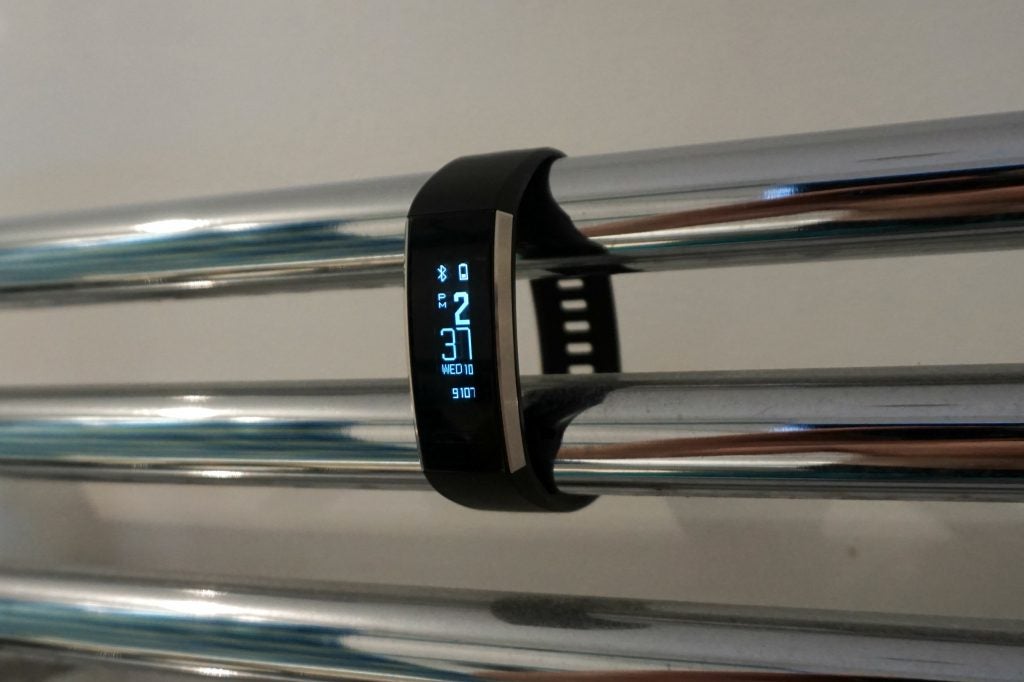 The Huawei Band 2 Pro is a fairly standard-looking wearable. The black unit I reviewed could easily be mistaken for a Fitbit Alta HR from a distance. Featuring a small, slightly curved, rectangular PMOLED screen and unassuming black rubber strap, the only obvious design flourishes are two silver strips lining the display’s long sides.

The end result is a discrete-looking wearable that can easily be worn both inside and outside of the gym without too much embarrassment.

The wearable also ticks all the right boxes when it comes to hardware and durability. Huawei has built the Band 2 Pro to meet 5ATM water-resistance standards, which means it can survive depths of up to 50m hassle-free. It’s also more than rugged enough to wear in the shower or pool.

The above features, coupled with its wealth of built-in sensors – including GPS, 3-axis accelerometer, Detached PPG Cardiotachometer and an Infrared Wear Sensor – mean that, on paper at least, it appears capable of tracking a variety of different activities.

Specifically, the sensor can track steps, runs, swimming, cycling, sleep and ‘breathing’. The latter being a weird feature that tries to help you relax by telling you whether you’re going the wrong way about breathing – which, like sleeping, is one of a select few activities that I’m 100% certain I’m good at.

Those sensors also mean the tracker can estimate its wearer’s VO2 max, as well as track basic biometric data such as heart rate. VO2 max measures the maximum amount of oxygen your blood can store. It’s a useful metric to track your overall progress when following a stamina/fitness-focused training regime.

The laundry list of features mean the Band 2 Pro comes close to matching the capabilities of significantly more expensive trackers, such as the Garmin Vivosport and Garmin Vivosmart HR+ and is an absolute steal for £79.99.

My only minor issue with the design is its slightly atypical strap. Unlike a traditional watch strap, the Band 2 Pro has a clip mechanism that’s fine for running, but I found it could come loose when swimming. 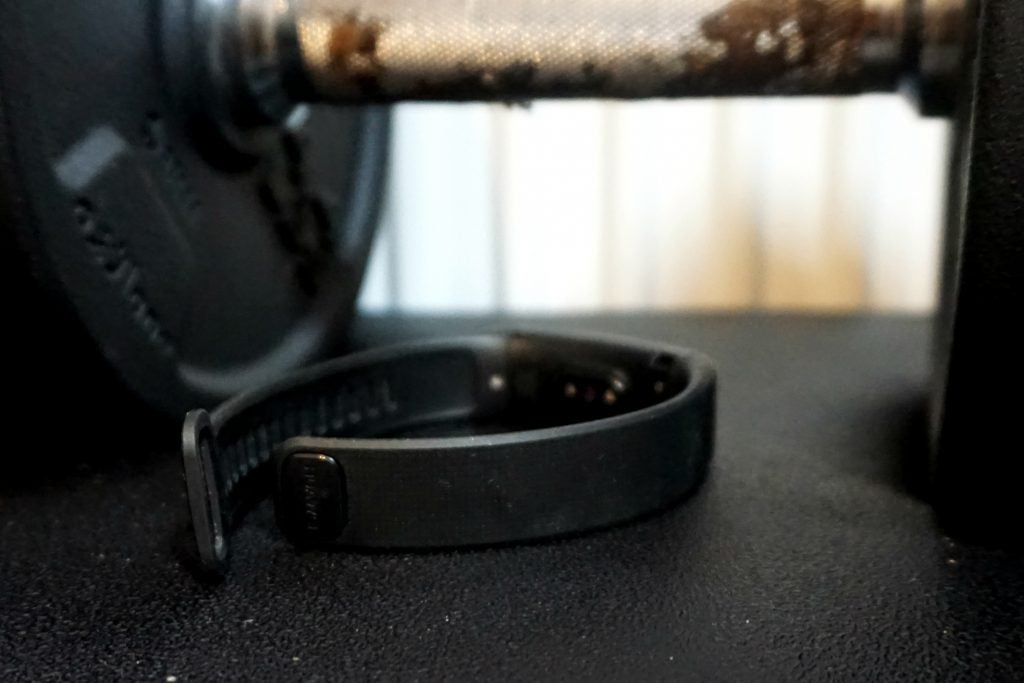 My bigger issues stem from the Band 2 Pro’s slightly cumbersome user interface. The PMOLED screen isn’t touch-enabled. Instead, you have to use a small, single, capacitive button on the bottom of the screen to interact with the wearable. The button can only read short and long presses.

A long press takes you to the next option in the main menu; a short press starts or stops it. The system is a little basic and doesn’t always work well when the Band 2 is wet. On one occasion, where I’d been caught in the rain, it took me a good three minutes to get the Band 2 Pro to stop tracking a run.

In addition, the software doesn’t have an application library or any smart features outside of basic notifications. At the very least I’d have liked to see a music remote, which is an invaluable aid when running.

I’m also not entirely sold on Huawei’s mobile software. To get the Band 2 Pro running, you’ll need to install the Huawei Wear app and go through a short on-screen process. This is fine, but from there it promptly tells you that to get all the data recorded by the Band 2 Pro, you’ll also have to install Huawei Health.

Huawei isn’t the only company to make you install two apps to make the most of its wearables; Samsung does the same with its Gear series – and it remains an annoyance. 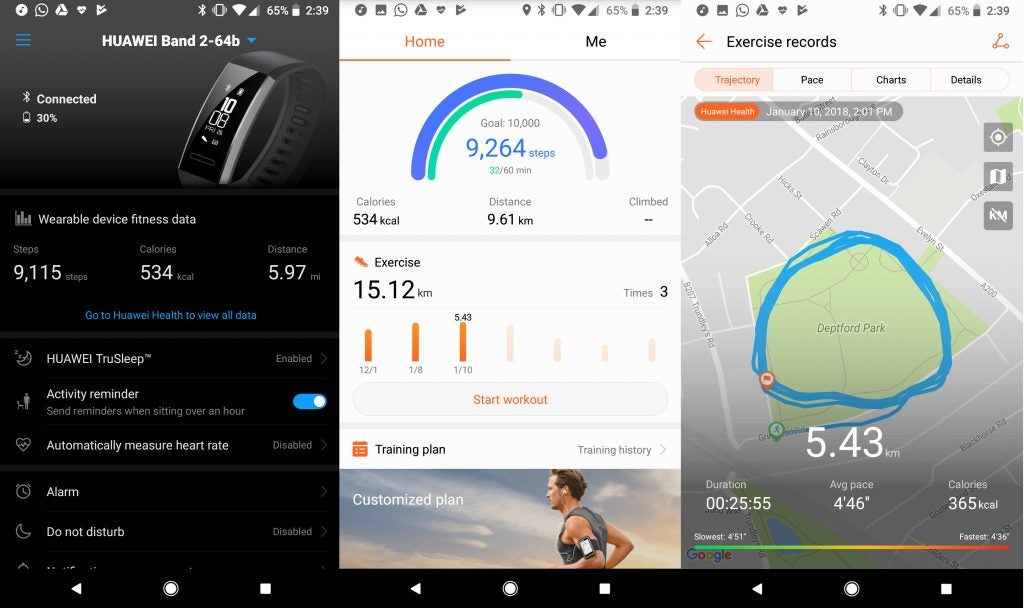 Fitness tracking is good enough for casual users looking for a basic frame of reference, but not quite up to scratch for more serious athletes.

Step tracking is always accurate and, for the most part, my run distance data was within 10-15 metres of the Garmin Vivosport and Samsung Gear Fit 2 Pro against which I tested it. These anomalies were also usually the result of it taking longer to lock the GPS once I’d started running, which is more than forgivable given the difference in price between the three.

VO2 max and heart rate readings had a tendency to occasionally go off the rails in a more severe way, however. VO2 max estimates are always a mixed bag on wrist-based wearables – accurately measuring it involves a fairly horrid process that forces you to keep running/exercising until you physically can’t keep going in close-to-laboratory settings. But the Band 2 Pro’s readings were poor even by basic wearable standards. Every reading I took saw huge fluctuations in the millilitres of oxygen per kilogram of body mass per minute detected, making the feature all but useless to me.

Related: What is VO2 max?

Like VO2 max, heart rate readings on wrist-based wearables aren’t terribly accurate, and serious athletes would do well to invest in a proper HRM strap. The Band 2 Pro’s readings weren’t even uniform, which again limits their usefulness. The feature was fine when I wasn’t exercising, but during runs it would jump all over the place. At any one time I’d check my heart rate, look down less than 30 seconds later and see a significant 25-30BPM disparity.

Being fair to Huawei, these issues are hardly a surprise, and considering the Band 2 Pro’s super-affordable price, they’re more than forgivable. Newbie runners and swimmers needs will still easily be met; it’s only more experienced athletes that will have serious problems.

This figure should be taken with a pinch of salt, however, since it’s based on very specific lab conditions where all-day heart monitoring is turned off and you don’t use the GPS. But even with this in mind, I was still impressed with the Band 2 Pro’s stamina. Doing a 5km run every other day with notifications turned on, the Band 2 Pro consistently managed to last a full week before needing a top-up charge.

This is a cut above most trackers with its feature list, which generally struggle to make it past the four-to-five-day mark. 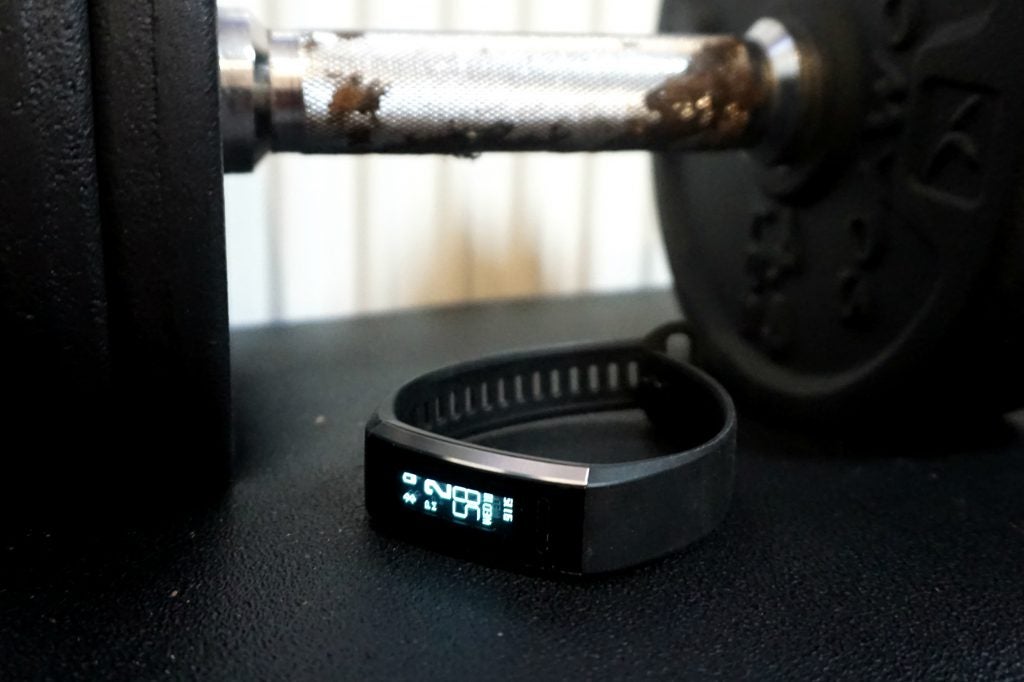 Why buy the Huawei Band 2 Pro?

If you’re looking for a super-affordable fitness tracker then the Band 2 Pro is a solid option. Featuring a robust design, good for the money distance tracking and excellent battery life, the Band 2 Pro will easily meet the needs of most new runners, swimmers and cyclists.

More serious athletes would do better to shell out a little more, since the Band 2 Pro’s advanced features are too inaccurate to be of any use.