Firewatch begins with a barrage of questions. You know your name is Henry and that you have a wife with a serious condition, but what kind of man is Henry? What’s his story? How are you going to play this part? And, in a way, Firewatch never stops asking these questions. You can call it a first-person-wilderness adventure game, an interactive drama, a psychological thriller or even a walking simulator if you want, but what it reminds me of most is a character study where you define the character. Everything you do, every choice you make, makes up a part of Henry’s journey.

If you know anything about the game, you’ll know that it’s the debut work of Campo Santo, a small studio founded by two of the leads behind Telltale’s The Walking Dead series, the designer of Mark of the Ninja and Brit artist, Olly Moss. You may also know that it’s a free-roaming adventure game set in the Shoshone National Forest in Wyoming, and that it focuses on two characters – a temporary fire lookout, Henry, and his supervisor, Delilah. Reached via handheld radio, Delilah is Henry’s only point of contact for most of the game. You’ll tell her what you’ll see, you’ll ask her for advice, and she’ll help you out with where you need to go and what you need to do. 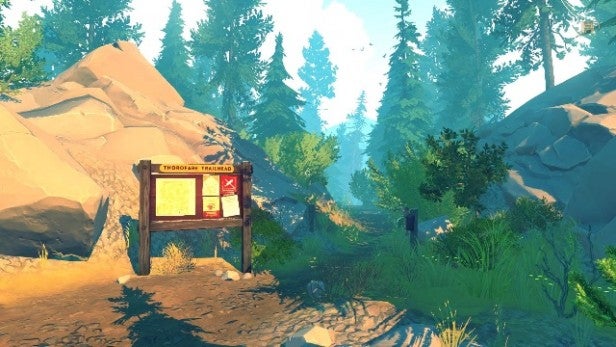 In a way, we’re looking at a classic two-hander, but one that stretches out over several square miles of Wyoming wilderness as Henry investigates fireworks, reports on downed lines and explores the park’s forests, canyons, lakes and creeks. You’ll seek out caches and supply drops, search for vandals and watch out for signs of grizzly bear. And all the time you’ll have Delilah on the other end of the radio, as you squeeze the controller’s trigger and use the stick to select answers in a clever simulacrum of Henry with his handset.

The questions your ask and the replies you give begin to steer your relationship with Delilah in new directions, and this in turn pushes the story along new paths. There’s a real sense of identifying with Henry, and of your choices altering both the character and the role.

And as you play, the game subtly shifts in tone, promising a love story, threatening a thriller, surprising you with sudden revelations that might turn everything on its head. Firewatch can be bleak, warm, funny, chilling, nerve-wracking, exciting and melancholic, sometimes within a single hour. Kudos to the writing team, the actors – Rich Sommer and Cissy Jones – and the composer, Chris Remo of Thirty Flights of Loving and Gone Home fame; Firewatch works on all sorts of emotional levels. 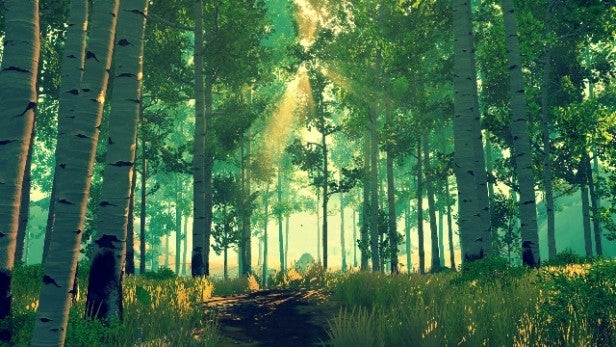 All credit to the artists and coders too. Much like The Witness, Firewatch hasn’t got the most detailed or photorealistic landscapes, but they’re rich and expressive, using shape, light and colour to build a convincing wilderness that changes tone to match Henry’s moods and the beats of the story.

Firewatch is ripe with moments of sheer beauty, yet areas that seem benign in the spring sunshine become oppressive or threatening in other lights, or promote panic and confusion as the tale nears its end. We’ll do our best to ignore the artificial limitations of the scenery, where this highlighted rock face or bank can be climbed, but that one not, and pretend we haven’t seen the odd pauses on the PS4 version when the landscape streaming system struggles. For a small game from a small team, Firewatch is a mightily impressive piece of work.

It falters most in the areas where its close kin falter. Like Everybody’s Gone to the Rapture, The Vanishing of Ethan Carter, Dear Esther, Gone Home and Oxenfree, it wants to explore gaming’s potential for new kinds of storytelling, but isn’t quite sure how to work that in with agency and interaction.

You’ll spend a lot of time in Firewatch simply going where you’re told and just discovering something, and when something approaching an old-school graphic adventure puzzle comes in, your first reaction will be a mild shock followed by an equally mild sense of disappointment. Really, is that all you’re going to ask me to do? 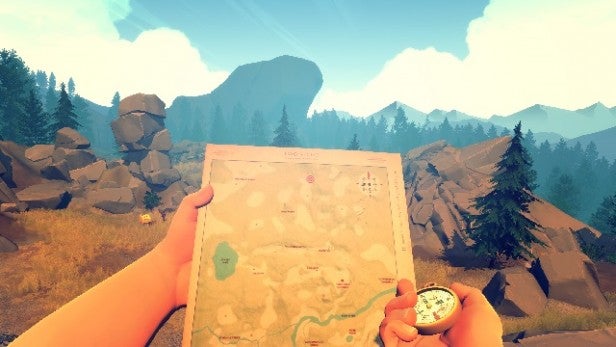 You can make things slightly harder for yourself, not relying on the excellent in-game map and compass, turning off objective banners and location tracking. All the same, it’s hard to imagine anyone getting stuck playing Firewatch bar the odd moment where the way forward seems unclear. And when we say that, we mean it literally. You’re either heading in the wrong direction or looking for some kind of entrance or pathway that’s no longer accessible.

If that really, really matters to you, then Firewatch might be disappointing. Ditto if you’re looking for action, real scares, length (it’s roughly four to five hours long) or a big, dramatic, crystal-clear resolution that puts everything in place. Your ending and the impact it has on you may vary, but I found mine strangely anti-climactic. Yet there’s something of an arthouse/indie movie sensibility at work here, where even those elements of the tale that seem unsatisfying seem to linger and haunt after the credits roll. It makes a return visit tempting just to experience it all again and clear things in your mind.

Verdict
As a wilderness adventure, Firewatch falters. There are choices to make and puzzles to solve, but these have more to do with character relationships and narrative than deduction, heroics and conundrums. As a piece of interactive fiction, though, it’s rich, gripping, beautiful and haunting. A powerful slow burner, smouldering beneath the surface, it establishes Campo Santo as a studio to watch.