Exclusive to PS4
It’s a very English kind of apocalypse; one that takes place without much fuss or obvious violence or screaming in a quiet Shropshire valley in the mid-1980s. There may be odd signs that not everything is right, but this is an apocalypse where the victims appear to have quietly disappeared, leaving a radio blaring in the garden, doors unlocked, a van left open on the side of the road. By taking inspiration from a very British vein of sci-fi, and most specifically the fifties novels of John Wyndham, the team at The Chinese Room have created a post-apocalyptic game unlike any other, as locked into a place and era as Kubrick’s 2001, the Quatermass movies or Tarkovsky’s films of Solaris and Stalker.

Frankly, the less you know going in, the better. The smartest thing you could do right now is purchase and download the game, play it, then come back and read the rest. In any case, we’ll keep things as spoiler-free as humanly possible because, in Everybody’s Gone to the Rapture, the game and the narrative are indistinguishable from each other. 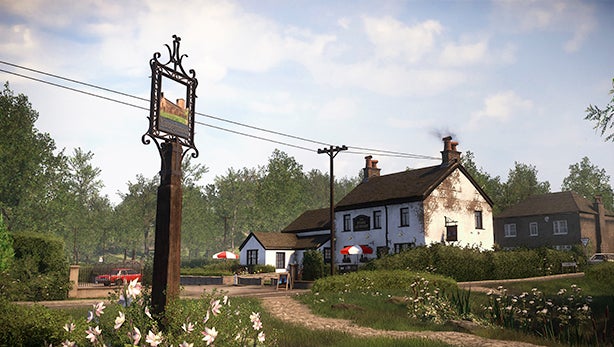 That doesn’t mean that either is predictable or linear. This is a story-led game in the style of The Chinese Room’s earlier Dear Esther or Fullbright’s Gone Home, but it’s one where you put the story together piece by piece, finding snippets in mysteriously persistent phone calls and radio broadcasts, or in reconstructed scenes played out by spectres formed from glowing trails of light.

Some you can find in any order, just through wandering the Yaughton valley. Others only trigger once you’ve triggered other sequences, and here the way and order that you do things seems – and it’s hard to be sure exactly what’s going on here – crucial. It’s not that one player will have an entirely different experience of Everybody’s Gone to the Rapture than another, but each experience will feel different and give you different information and a different slant on the story, even as each leads to the same conclusion. 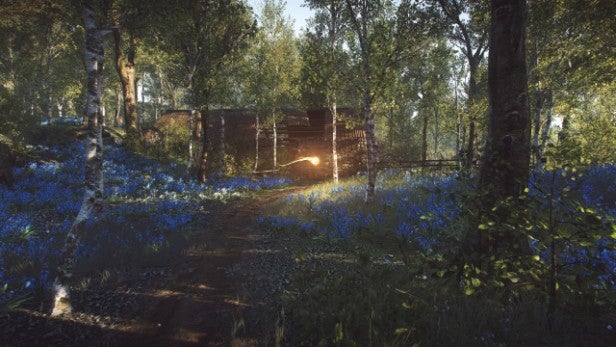 There are trails you can follow through the game, and The Chinese Room has been extremely clever about how these work. Beyond following strange lights you’ll find yourself pulled in by a range of audio cues. A ringing phone or the sound of bells might pull you in the right direction. A crackling noise with hints of speech will drag you back into some scenario. It’s a game where you feel directed rather than placed on rails, and while Everybody’s Gone to the Rapture puts some limitations on your exploration, you’re still free to roam and discover to a large extent.

As with The Astronaut’s The Vanishing of Ethan Carter, a lot of time and effort has gone into making Yaughton and its environs a place worth exploring. The landscape in Everybody’s Gone to the Rapture is every bit as beautiful as The Vanishing’s, but it’s so much more lifelike and detailed, resurrecting the sights, sounds and textures of an England that itself vanished years ago. 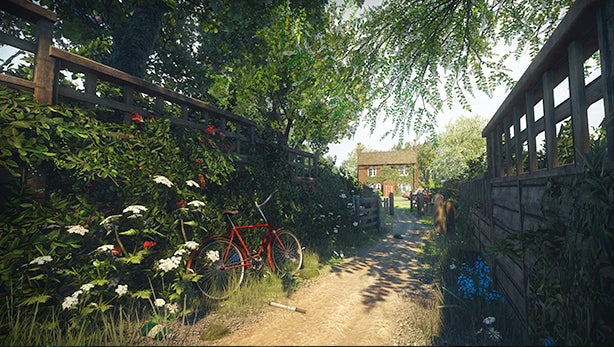 It’s not 100 per cent authentic and there are oddities, like the fact that everyone in the area seems to have the exact same make and model of radio, but it is believable. Houses have the kind of jumbled, inelegant interiors you might associate with rural areas of the period. Even the insides of the vans and cars have the right look and feel. And while the landscape might pack a suspicious amount of scenic beauty into one area, the lush planting, all gently moving in the breeze, is right on the money. From its tranquil cottage gardens to its rocky streams and forest paths, this is a seriously beautiful game.

Of course, Everybody’s Gone to the Rapture faces the same challenge so many other narrative-led games have faced: how do you give the player a sense of agency, and make them feel like they’re actually playing a game? Here The Chinese Room doesn’t take any obvious route, ignoring puzzles, hostile forces to run and hide from and even basic tasks like collecting objects or notes. Instead, what gameplay there is comes down to following the trails, interacting with a few key objects and a kind of ‘tuning in’ manoeuvre with the DualShock 4 controller when you reach some scenes. None of these activities is going to exactly challenge many players, even if it is perfectly possible to get left behind if you’re not paying attention when following a trail. 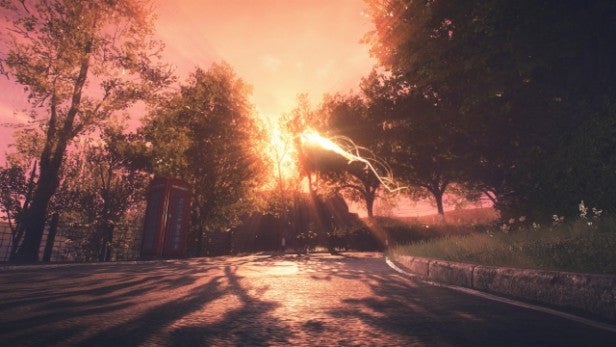 Does this matter? In a sense, it does. Everybody’s Gone to the Rapture makes you an observer rather than a participant in its drama, and at times the lack of interactivity is frustrating. In fact, the lavish detail of the setting can make it more so. When there are so many things you want to touch or look at, the inability to do so is unsettling. What’s more, there are times when you’re held back by an obstacle that is anything but insurmountable or impossible to displace. Why can’t you squeeze past that garden hedge, climb over that gate or simply kick down that locked door?

And – let’s face it – if you’re the kind of gamer who labels these things ‘walking simulators’, then the paper-thin interaction here won’t change your mind. 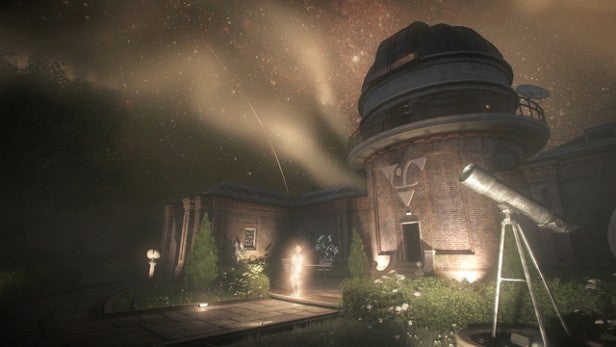 In another sense, though, the limited interactivity doesn’t matter, because – on some higher level – Everybody’s Gone to the Rapture still functions like a game. Here it’s all about how you piece together the story, both in the landscape surrounding Yaughton and in the landscape inside your own mind. In a way, the story itself is the puzzle, and linking the events together, both geographically and temporally, becomes your real task, gathering the hints and clues and scenes that make it all make some kind of sense.

That’s difficult in a game that can be deliberately obtuse, but this is also an emotional exploration, and why the fragmented narrative makes it hard to care about all of the characters, the excellent voice acting and an absolutely amazing choral score give many sequences real impact. Like any good science fiction Everybody’s Gone is driven by ideas, but it also wants to talk about love, sacrifice, fear, loneliness and acceptance. And while it likes to keep its sci-fi subtle rather than whack you with ‘wow’ set pieces,  there are some serious hairs-on-the-back-of-the-neck moments here, where sound, vision and story come together to produce something amazing. 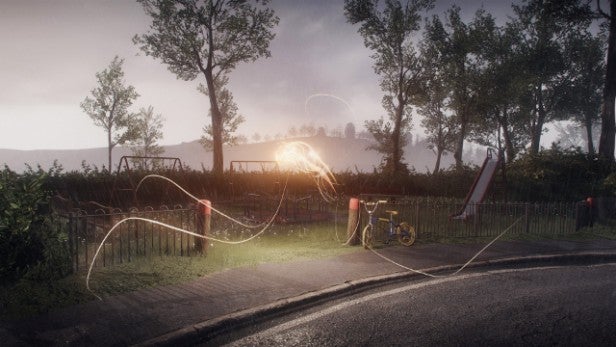 It’s a relatively short four to five-hour game, and I’m not 100% sure that Everybody’s Gone to the Rapture always hits its targets, or that the story reaches the heights of wonder and emotion that it’s pushing for. It’s good, but if you’re looking for ‘end of Bioshock Infinite’ levels of revelation, you might not find them here. Yet I am 100% sure that it’s a fascinating game, and that there’s something in its strange, eerie, melancholy atmosphere that’s worth experiencing – and worth experiencing more than once. You will miss some things in your first play through, and the second will expose new details that transform the way you see things.

Sure, it’s neither a thriller nor a shocker, and some will find its deliberate pace boring or tell you that it’s yet another over-rated, pretentious ‘notgame’ dud. Don’t listen. If you’re in the mood for something strange, imaginative, thought-provoking and distinct, then Everybody’s Gone to the Rapture is a wonderfully weird piece of fiction.

Verdict
Stunning production values and superb graphics and music collide in a fascinating work of interactive science fiction. Some many be put off by the lack of real interactivity and the slow pace of the gameplay, but more will find the story as interesting and resonant as the way it’s told. Is it a game? Who cares? It’s a stunning experience, whatever you want to call it.