Available on PC (version tested), Mac, Xbox One
While you can’t describe Oxenfree as entirely original, I’d struggle to name another game with the same cocktail of influences. Built by Night School Studio – a small team of ex-Telltale and Disney bods – it has elements of Telltale’s graphic adventures and the sort of simple, stripped-back 2D style you’d normally associate with low-budget mobile and independent games.

Yet you’ll also find elements of eighties teen dramas, modern indie sci-fi, experimental narrative-led games, such as Gone Home and Dear Esther, not to mention eighties horror flicks. Imagine an American version of Everybody’s Gone to the Rapture that owed more to old John Hughes movies than John Wyndham and Radio 4. Oxenfree isn’t quite as powerful or accomplished as The Chinese Room’s opus, but it’s a smart game, full of heart and soul.

As with most games of its ilk, the less you know about the story going in, the better. All we’ll say is that it involves a small group of five teenagers stuck on an island, once a military base but now a campsite and holiday resort. Our teen protagonists are there to drink and party, but fate has another course in mind. Before long they’re not just wrestling with strange forces but with the shadows found in their own pasts. 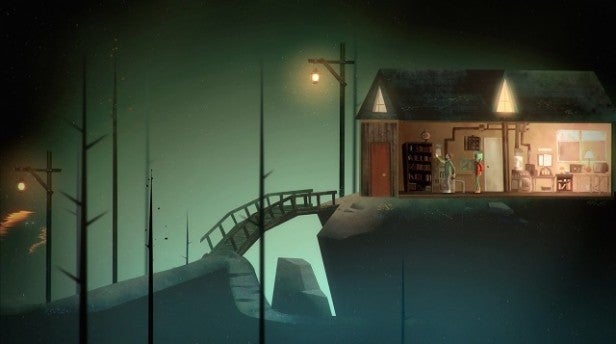 The whole things played from an unusual, zoomed-out 2D viewpoint – the sort of view you’d normally expect from an indie platformer rather than a graphic adventure. Your protagonist, Alex, can move around and interact with specific elements of the scenery, but Oxenfree has no inventory to speak of and eschews all the usual finding, combining and using objects stuff to focus more on exploration and dialogue. There are some puzzles in Oxenfree but they’re not really the point. Like much of Telltale’s recent work it’s more of an interactive drama, where the choices you make and the relationships you prioritise are steering the story in slightly different directions.

In effect, while your primary goal is to solve the island’s mysteries, close dimensional rifts and get your five teens back to the mainland, what you’re really doing is directing Alex’s performance, making a whole series of decisions that will define where she stands and where her friends stand when the game reaches its end. 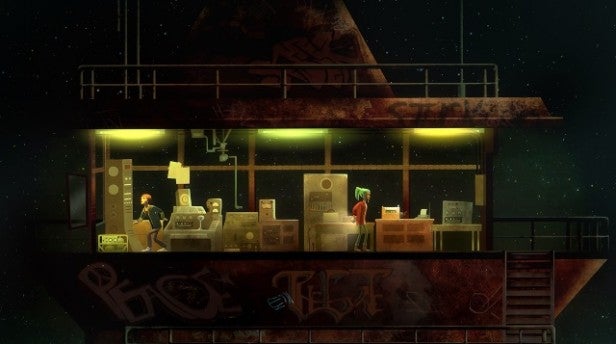 For some players, this will be frustrating. An awful lot of Oxenfree’s gameplay is based on exploring the island’s buildings, caves and pathways, or on tuning an old-school transistor radio which, at the right frequency, will cause specific effects. Beyond this you’ll find the odd quiz or scavenger hunt, while some eerie, old-fashioned tape players need working manually to play a tune at a certain speed. If you’re after proper puzzles, head for Double Fine’s Broken Age or Sierra’s King’s Quest revival; you’re not going to find them here.

On the other hand, Oxenfree’s dialogue system is both wonderful and sure to be copied in adventure games to come. For a start, dialogue isn’t something that happens only at key points but something that happens all the time when you’re playing the game. This choice plays a key part in building the game’s personality, while keeping the narrative moving even when the action is quite mundane. What’s more, it feels and sounds natural. When Alex has an opportunity to make a point or reply to someone else’s line, speech bubbles hover around her and you select the one that feels right to you. 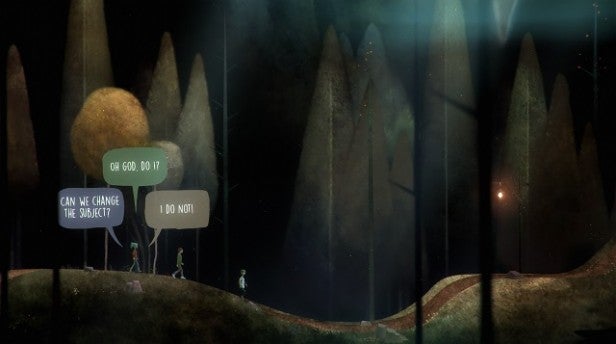 However, the speech bubbles fade over the course of a few seconds, meaning you can fail to or just choose not to say anything at all. That’s fine. Silence is a valid response to some enquiries. Sometimes it’s wisest to keep your lips zipped, while at other times you can interrupt the other party and stop their thread of conversation dead. Every choice or non-choice feeds into the game’s unfolding story, softening or exacerbating conflict, helping to heal rifts or making them even worse.

And whatever Oxenfree lacks in compelling gameplay, it makes up for in atmosphere. In theory, it shouldn’t be so. This is a game without close-ups, where you’re kept at a distance from the characters, and where simple design and animation has to carry a lot of descriptive weight. There aren’t many cheap shocks or gruesome moments, and even the use of music and sound is restrained. Yet, somehow, just through the vocal performances of the cast, the well-written dialogue and the brilliant use of fairly basic visual effects, Oxenfree manages to be creepy, intriguing, suspenseful, tense, scary, sweet and moving. Nor do you have to be a teen to find it so – like the best fiction about young people, it captures something of what it’s like to be that age and brings it back. The more you play, the more you realise that it’s not so much about survival, horror, the unknown or monsters, as it is about fear, uncertainty, loss, the need to make connections and regret. These are themes that will resonate with players of any age or gender.

Verdict
Oxenfree is short, at around four-to-five hours, but like Everybody’s Gone to the Rapture, it’s the perfect length for what it is. It’s not exactly challenging, and if you’re stuck it’s usually because you failed to spot something obvious – just check your notes or the helpful in-game map. That will be enough to write it off for a certain audience of gamers; the ones who don’t think that games should be about the story or dismiss Gone Home and Everybody’s Gone as ‘walking simulators’ (in which case you might label this a ‘talking sim’). But if you’re happy to get caught up in a rich, fascinating piece of interactive fiction, Oxenfree will keep you hooked throughout your first playthrough – and thinking through at least one more.